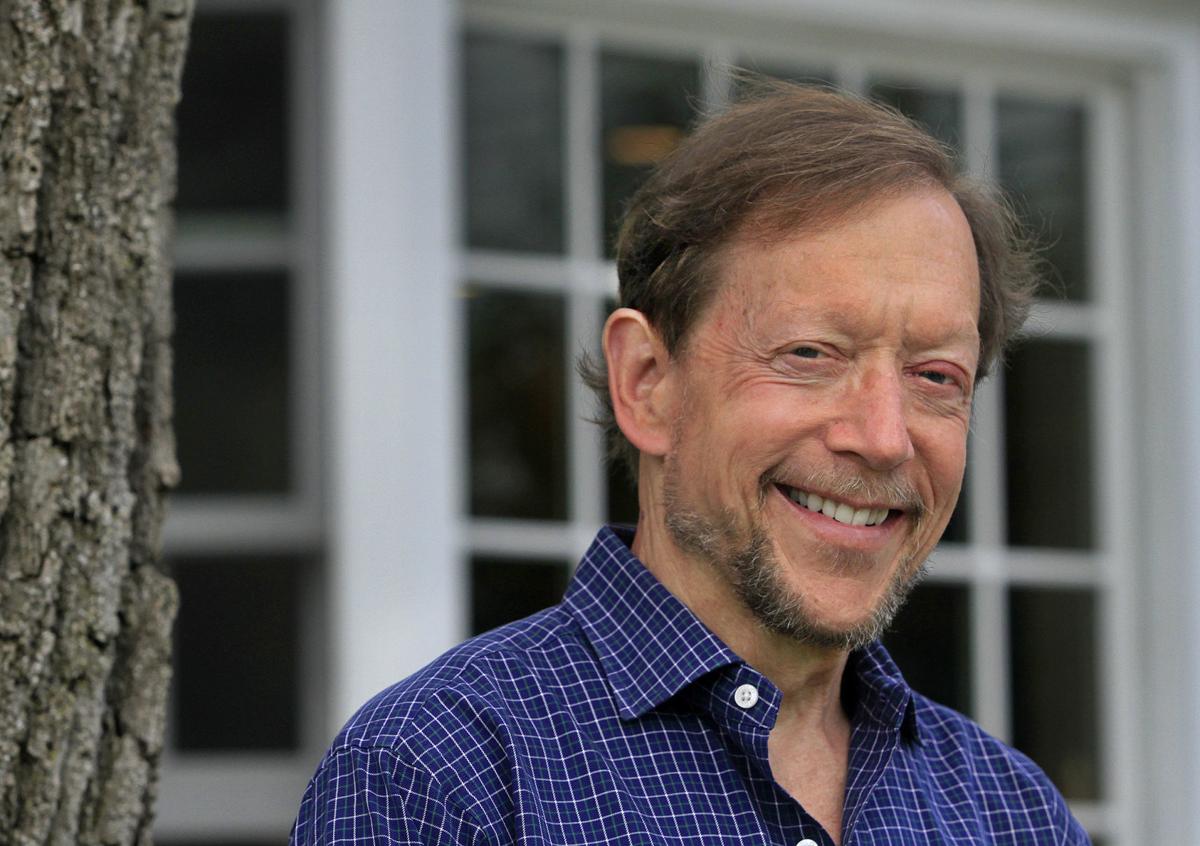 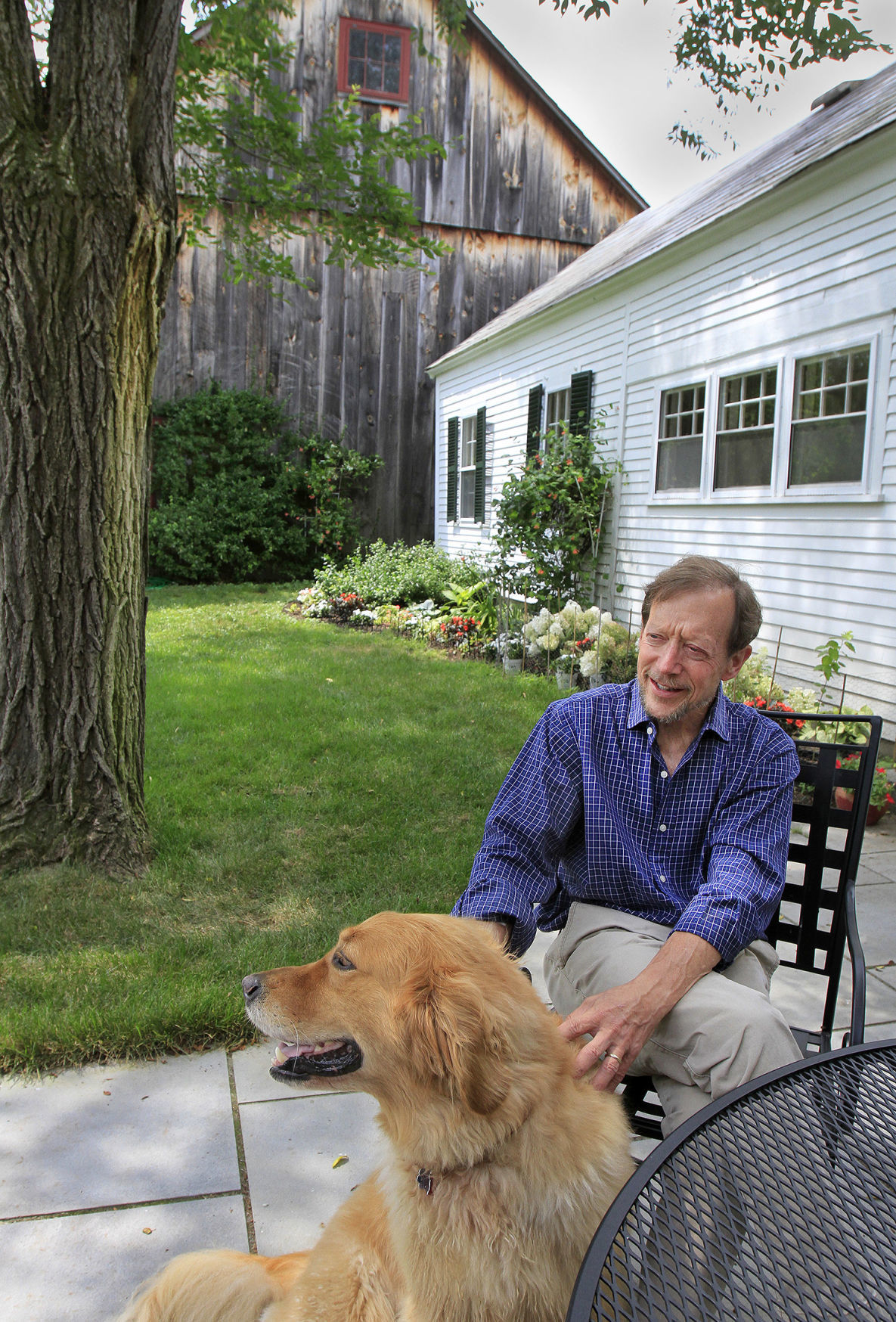 Dr. Steve Larmon, at home in Keene with his dog, Bacon.

Dr. Steve Larmon, at home in Keene with his dog, Bacon.

Dr. Steve Larmon sits relaxed on the side patio of his home in West Keene on a humid summer day, his legs crossed, arms languidly splayed out. There are heavy thunderheads on the western horizon, probably still deep within Vermont’s Windham County; it will be another two hours before the clouds slowly drift east and transform into storms that blanket the area with buckets of

His wife, Jane, sits with him. He’s describing their house, where they moved in 1990 when he took a job as an oncologist — a cancer doctor — at what was then known as the Keene Clinic and is now Cheshire Medical Center, a member of the Dartmouth-Hitchcock Health System.

“It’s old; it was in poor shape when we got here. We had to do a lot of work on it,” he explains. “It was first built in the 1750s, and the owners died of smallpox. The original house was burned down because of that; that’s what they did then during the epidemics. It was rebuilt in the 1780s.”

He and his wife have been working on sprucing up the grounds around the house because it will be the wedding venue for their elder daughter, Annie, a New York City writer, in a few weeks. “The tent will be there,” he says, pointing to a portion of the backyard.

Larmon is in a contemplative mood, surveying his surroundings. He has the face of a thinker — one can see his brain working, his brow furrowed, and his eyes focused on something unspecified in the distance. But he’s not dour; there are bright flashes of ironic humor and even, sometimes, little bon mots that make one smile. His knowledge on a wide range of subjects is impressive, from archaeology to history, literature to science. And, of course, medicine.

There are significant transitions in his life right now — the coming wedding, a first grandchild on the way, and finally, at the end of this month, the closing out of his long, 41-year career as a doctor, 29 years of which he’s spent practicing in the Monadnock Region and Vermont.

You don’t want to have to see an oncologist, cancer being what it is — “the emperor of all maladies” as the title of a bestselling book on the disease puts it. But there are hundreds, maybe even thousands, of area patients and their families who Larmon has both treated and helped as they faced the long, dark valley of the all-too-common affliction. Of course, many have died, but many have survived, too.

“I got to know an awful lot of families in town,” he says simply, summing up his experience.

His story begins in Olean, N.Y., a community about half the size of Keene that is the principal city of what’s called the Southern Tier of New York state, south of Buffalo near the Pennsylvania state line. His father was an advertising executive, his grandfather the chairman of the board of Young & Rubicam, founded in 1923 in Philadelphia and still one of the largest and most prestigious advertising agencies in the world.

He describes himself as the kid who was fascinated with science in all its forms, from diligently working with a chemistry set to collecting rocks and studying how they were formed. He had no interest in continuing the family tradition in advertising.

During high school, a friend of the family, Dr. Leo Moss, asked Larmon if he would like to learn more about medicine. Moss was a pathologist who had immigrated to the United States before World War II, a refugee fleeing the Nazis.

“He’d been a professor of pathology in Germany, and he loved to teach,” Larmon says. For an entire summer, Larmon worked with the man as he performed autopsies. “I assisted him; I saw everything — the body from inside out, all of the organs, everything. He was teaching me the entire time. He fired up in me what I had always wanted to do — practice medicine.”

Larmon also got to know doctors at the local clinic in Olean, where he learned more about specific fields of medicine.

After graduating from Dartmouth College, he enrolled at Columbia University’s medical school, graduating in 1978, followed by a residency at Mary Hitchcock Memorial Hospital in Hanover. He eventually became chief resident, specializing in oncology, hematology and internal medicine.

In 1983, he and Jane married. The two had known each other from an early age, their families having been friends in Olean.

The couple moved to Andover, Mass., where he took a position with a specialty oncology group. Their three children were born while they were there.

“It was so busy there,” Larmon says of the practice, his wife finishing the sentence by adding, “up to 110 hours a week.”

As a result, Larmon felt the heavy workload would prevent him from watching his kids grow up. They looked to move and found Keene.

“At the time, the (Keene) clinic was considering building a cancer center,” he says, “and I was sold on the people here.”

Larmon was one of the key people responsible for what is now the Norris Cotton Cancer Center-Kingsbury Pavilion at Cheshire Medical Center.

The reason the cancer center was established and later expanded, he explains, was because local patients previously had to travel long distances for treatment. “Patients prefer to undergo cancer treatments closer to home,” he says. But because Keene alone didn’t have the population to support such a center, its service area was designed to cover the entire Monadnock Region and parts of southeastern Vermont and northern Massachusetts.

Larmon, always working as an employee of Dartmouth-Hitchcock, practiced at the Keene hospital, Brattleboro Memorial Hospital and Monadnock Community Hospital in Peterborough. He officially retired his practice in Keene in 2014 and will retire from Peterborough at the end of this month.

On the other side

When he entered the field of oncology, Larmon says, the knowledge base and array of treatments were so much more limited than they are now.

“We’re treating patients with therapies that don’t hurt them,” he explains, adding that the chances of survival are significantly greater than when he started in medicine.

“When I started in practice, the five-year survival rate of all cancers was just under 50 percent. It’s now 69.3 percent.”

And the new immunotherapies being developed hold great potential, he says, involving the artificial stimulation of the immune system to improve the body’s natural ability to fight the disease.

Larmon was himself successfully treated for prostate cancer in 2009. “It was great to be on the other side of the process,” he says.

“It’s fascinating when you realize how strong denial is. I opened up my own pathology report, read it, and said, ‘Thank God I don’t have it.’ Halfway down the hallway, I stopped and realized the report said it came back positive (for cancer). I can’t believe my brain would have done that. It shows just how strong our emotions are when we face this prospect.”

One in four people will have cancer at some point in their lives, Larmon notes.

And dealing with cancer patients raises any number of issues and questions, he says, “one of which is when to stop treatment.”

Nevertheless, he explains, knowing what patients need through each stage, and helping them, is rewarding. “If there was someone who needed help, I stayed at work as long as it took to get it done. I felt a responsibility for them; I was totally involved.”

But he admits that the pressures of an oncology practice were an ongoing source of stress, and one of the primary ways he dealt with it was to run. Several mornings a week he’d rise at 5:30 and join what he calls a “band of brothers” who enjoy long-distance running. In all, Larmon has finished 22 marathons, including a string of DeMars locally and two Boston Marathons.

“Running is a tremendous relief. My brain was working while I ran; it calmed me down.”

One of his longtime running buddies, Ed Berriman of Keene, describes the running sessions as very therapeutic for all its participants, with a generous dollop of conversation. “Steve is quite a wordsmith, and he’s kind, generous and sweet,” Berriman says. “He’s a giver.”

Larmon has had to curtail his running somewhat since he suffered a heart attack in March, while on a long-distance training run for another marathon. “I was at mile 21, and I felt my legs go leaden; I knew something was wrong.”

He was only a mile from his home, but he had to stop. “I had my cellphone and called my wife,” he says. “By that time, I knew I was having a heart attack.”

Jane rushed to pick him up and took him to the emergency room. “Within two hours, I was up in Hanover and being wheeled into surgery.” Stents were implanted, and he suffered almost no permanent damage to his heart.

In retrospect, Larmon says he probably should have paid attention to some prior minor episodes of tightening in his chest after runs. He ignored them because he’d never had any chest discomfort before and had always been healthy and fit, with normal blood pressure, blood sugar and cholesterol.

“It’s just a reminder to get things checked out if you think something’s wrong,” he says.

Larmon won’t be without interests and activities in his retirement. He’s chairman of the board of the Monadnock Conservancy, a regional organization working with towns and landowners to conserve natural resources and the area’s rural character and scenic beauty. He’s also helping to rebuild the barn at Stonewall Farm near his home. He occasionally teaches as an adjunct professor at Dartmouth’s medical school. And he enjoys playing the piano and singing.

“Medicine has been a wonderful job,” he says. “I loved it; that’s what’s so hard about stopping. There was no question that I wanted to become the very best I could. This is what I was supposed to do in my life.”

At a glance: Dr. Steven Larmon