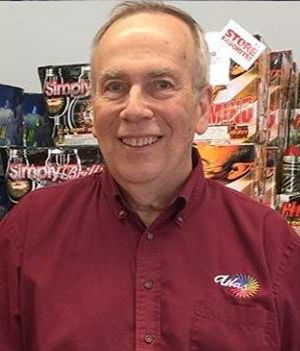 Wayne A. Desrosiers, 73, beloved father, brother and uncle, of Jaffrey, died peacefully at his home with his daughters by his side on Thursday, Feb. 6, 2020.

He was born on Oct. 10, 1946, in Peterborough, the son of the late J. Henry and Mary M. “Peggy” (Brideau) Desrosiers. A graduate of Conant High School, class of 1964, Wayne attended the University of New Hampshire and earned a bachelor’s degree in accounting from New Hampshire College (now SNHU).

Wayne proudly served in the U.S. Army. After returning from Vietnam, Wayne married his high school sweetheart, Marcia Moore, in 1971. In their early married years, the couple lived in the Boston area, where both worked for John Hancock. In 1981, they moved back to Jaffrey to take over Marcia’s father’s Ford dealership, Ray Moore Motors, and to raise their family in the town they both so loved.

Wayne went on to have a 38-year career with Atlas PyroVision, discovering a passion for the art and the business of fireworks. He was the general sales manager for the display business for many years, before “retiring” to the company’s class C retail stores. Up until his death, he was still managing the Rindge store, with help from his faithful goldendoodle, Amy.

In his spare time, he could be found at Conant High School running the scoreboard for both boys and girls basketball home games.

Wayne was predeceased by his beloved wife of 48 years, Marcia, and a brother, Peter Desrosiers. He is survived by his daughters, Carrie and Holly Desrosiers, both of Jaffrey; his brother, Henry Desrosiers, of Mashpee, Mass.; and a large extended family and many friends.

At the family’s request, there will be no calling hours.

A Mass of Christian Burial will be celebrated on Saturday, Feb. 15, 2020, at 11 a.m. at St. Patrick Church, 89 Main St., Jaffrey, with Rev. Wilfred Deschamps, Pastor of St. Patrick Parish, as the celebrant. A reception will follow at the American Legion, 20 Webster St., Jaffrey.

Burial will take place in the spring at St. Patrick Cemetery in Jaffrey.