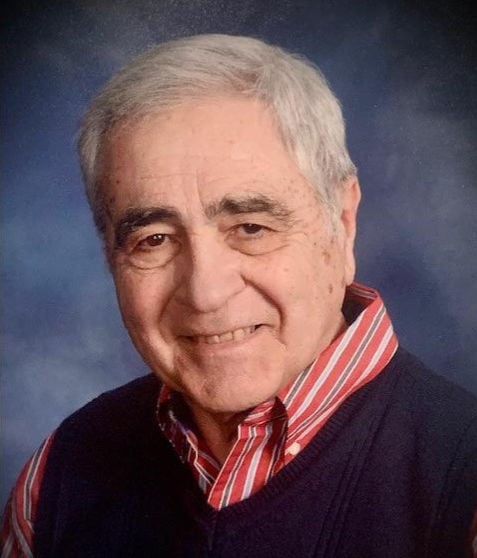 Born on Sept. 7, 1928, in Easton, Pa., he was the oldest son of Liboria “Leo” and Adelina “Mary” (Di Raimondo) Galante. The family spent his early childhood years in Staten Island, Harlem and New York City, N.Y. Mr. Galante graduated in 1946 from Central Needle Trades High School in New York City. He then enlisted in the U.S. Coast Guard and was honorably discharged from his military duty in 1949.

After attending hairdressing school, he began his career in Paterson, N.J. Eventually, he opened and was sole owner of Sir John’s Beauty Salon in Teaneck, N.J., for more than 20 years. His clients included singer Pat Boone and his wife, Shirley, along with their daughter and future singer, Debbie Boone. During this time, Mr. Galante also served as president of the New Jersey Master Hairdressers Association. In July 1970, Mr. Galante married the former Clara Lofgren. Mr. and Mrs. Galante celebrated their 50th anniversary in July 2020.

In 1973, a move to New Hampshire also resulted in a career change for Mr. Galante, when he and his wife bought and operated a quaint New England country store in Swanzey. There, the Galantes raised their family in a beautiful area and were active in all their school and church events.

Faith and family celebrations were always Mr. Galante’s No. 1 priority, and he cherished time spent with his family. In 2010, Mr. and Mrs. Galante moved back to Pennsylvania, settling in Mount Joy. Over the years, Mr. Galante was active in parish ministry as a eucharistic minister and in the Society of St. Vincent de Paul. He sang in the church chorus and with the Four Seasons Singers in Rapho Township, Pa. Son, husband, father, grandfather, great-grandfather, friend, his legacy of love enriched all our lives and he’ll be forever in our hearts.

In addition to his wife, Clara, Mr. Galante will be celebrated and missed by his son, Steven Galante, and his wife, Robin Weiner Galante, of Skokie, Ill; his daughter, Shari Young, and her husband, Douglas Young, of Glen Rock, Pa.; his daughter, Julie Leno, and her husband, James Leno, of Redington Shores, Fla.; and his son-in-law, Martin Nolan, of Fitzwilliam. His world revolved around his six grandchildren: Melanie Moran and her husband, Kevin Moran, of Pittsfield, Mass.; Lorraine Nolan of Swanzey; Arielle and Joseph Galante, both of Chicago; Kira Connor and her husband, Kyle Connor, of Clarksville, Tenn.; and Ashlin Surman and her husband, Matt Surman, of Coatesville, Pa. His two great-granddaughters, Reese and Hanna Moran, were the light of his life. Mr. Galante was preceded in death by his daughter, Denise Nolan; his stillborn son, Andy Galante; and his brother, Vincent Galante. He is also survived by two nieces and a nephew; and June Galante, mother of Denise and Steven.

A Committal Service will be held at St. Joseph Cemetery, Keene, on Tuesday, June 15, 2021, at 3:30 p.m. In lieu of flowers, memorial contributions in John Galante’s name may be made to the Society of St. Vincent de Paul, 173 Main St., Keene NH 03431; or St. Jude’s Children’s Research Hospital, 501 St. Jude Place, Memphis TN 38105. To send an online condolence, please visit www.sheetzfuneralhome.com.