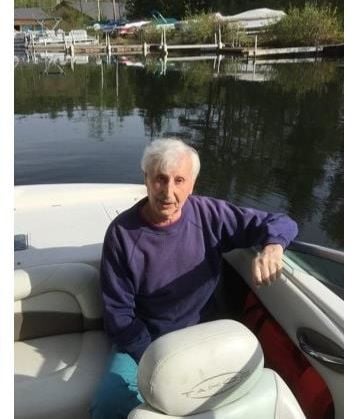 Robert Marshall “Jake” Giard, 91, of Kennebunk, Maine, and formerly of Keene, passed away on Sept. 30, 2020, in Biddeford, Maine, with his son and daughter-in-law by his side.

Robert was born on March 30, 1929, to Alfonso and Mary Jane “Marie” (Morin) Giard in Keene. He has two siblings: Leo Giard, who passed away in 2001; and Dorothy Giard of Keene. Robert is survived by two sons: Ronald Giard and wife, Cathi, of Kennebunk, Maine; and Marshall Giard of Lake Lure, N.C.; and a stepdaughter, Rhonda Goodnow, and her husband, Richard, of Fitzwilliam. He was preceded in death by a stepson, Steven Otis, of Fitzwilliam. He has four grandchildren: Angela Hickey of Jackson, N.J.; Jeremy Giard and his wife, Anna Giard, of Charlotte, N.C.; Jessica Giard of Keene; and Joshua Hudson of Keene. He has four great-grandchildren: Jacob and Sophia Hickey of Jackson, N.J.; and Victoria Maximova and Nicolas Giard of Charlotte, N.C.; and two nephews, Barry and Brad Beaudoin, of Troy. He was previously married to Bertha (Beaudoin) Holman of Fitzwilliam, and was preceded in death by his companion of more than 40 years, Elizabeth Murphy, who passed in 2017.

Robert loved racing and watching all sports, and in his older years he enjoyed watching golf and game shows — “Family Feud” and “Jeopardy” were his favorites. He could often be found scavenging yard sales for great deals on items and was always coming home with little trinkets. He also had a vast assortment of clocks and racing posters from all eras. He used to love to feed the chipmunks and squirrels and would often have his pockets full of acorns for them. Every spring and summer you would find him tending to his garden, as he loved to grow vegetables and flowers. He also loved to watch the birds and he always had a bird feeder near him so he could see them year-round. In his younger years, Robert loved playing cards, fishing and spending time at Squam Lake.

Robert attended Keene schools. After graduation he enlisted in the U.S. Army and served in the Korean War. He worked as a delivery driver for Adam’s Lumber and as a plumber at Economy Plumbing and Heating. He also built four houses with his brother, Leo, in Swanzey.

He spent his retirement years living in Daytona Beach Shores, Fla., in the winter and Keene in the summer months with his companion, Elizabeth Murphy. The last five years he spent his summers living at Squam Lake and his winters in Kennebunk, Maine, with his son and daughter-in-law.

In keeping with Robert’s wishes, there will be a private graveside service for immediate family.