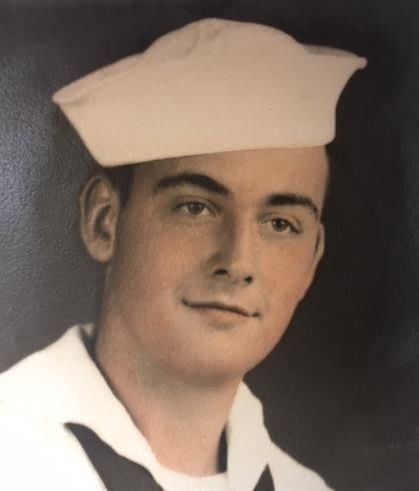 Harold E. Larro, 94, a longtime Keene resident, died on Sunday, Nov. 1, 2020, at the Jaffrey Rehabilitation and Nursing Home. He passed peacefully after a period of declining health.

Harold was born the son of the late Annie (Hackler) and Clarence Larro on July 17, 1926, in Keene. He was raised in Marlborough and graduated from Marlborough High School in 1944.

After graduation, he joined the U.S. Navy and served on the Heavy Cruiser USS Chicago CA-136 during World War II in the Pacific. Harold was present in Tokyo Bay during the formal Japanese surrender ceremony. He was the recipient of the World War II Victory Medal, American Area Medal and the Asiatic Pacific Area Medal. He was honorably discharged at the rank of Seaman First Class.

Upon returning home, he held several jobs as a delivery truck driver for Neil Vermouth (Cains Foods) as well as a meat cutter at John’s IGA on Park Avenue in Keene.

On Aug. 9, 1952, he exchanged vows with Eunice P. Dubois in a simple service in the parsonage of the Second Congregational Church in Keene. They were married for a period of 61 years until Eunice’s death in 2013.

Through the years, Harold was best known as a local meat cutter at the Walpole IGA and Wilber Brothers Market in Swanzey. During the late 1970s Harold worked for a short period for the Green Mountain Railroad in Keene operating the train and conducting switching duties as taken over from the Boston and Maine Railroad. He was one of the last few Keene natives to work for the railroad in Keene before the rails were removed.

Following retirement, he continued to work on a part-time basis as a meat cutter at McLay’s Market on Park Avenue in Keene. He has various meat recipes in the 1972 edition of the Yankee Magazine’s Favorite New England Recipes Cookbook.

Harold was an avid railroad buff and enjoyed operating his model HO scale trains for many years. He was a local historian and was featured in the Historical Society of Cheshire County feature film series on the Hurricane of ‘38, along with “Trolley’s Trains and Flyers: Rail Travel in the Monadnock Region.” Harold was also interviewed for an audio talk series on the Marlborough Webb Granite Quarry for the Monadnock Institute at Franklin Pierce College. He was a member of the Marlborough American Legion for 74 years.

Harold enjoyed meeting people and had a great sense of humor. He will be remembered as a dedicated family man, husband and friend to all who knew him.

Harold is survived by his children: Steven E. Larro of East Berkshire, Vt.; and Scott D. Larro and his wife, Jill, of Milford. He is also survived by his five grandchildren: Stephanie, Matthew, Hannah, Casey and Christopher Larro. Additionally, he is survived by cousins, nieces, nephews, extended family and friends. Harold is predeceased by his sister, Patricia (Larro) Descoteau.

In keeping with Harold’s request, there are no calling hours and the burial service is private. A graveside service with military honors will be performed at Monadnock View Cemetery in Keene. Donations can be made in memory of Harold E. Larro to: American Heart Association/American Stroke Association, P.O. Box 417005, Boston MA 02241-7005. All services are under the care of Cheshire Family Funeral Chapel and Crematories, 44 Maple Ave., Keene NH 03431 (www.cheshirefamilyfuneralhome.com).