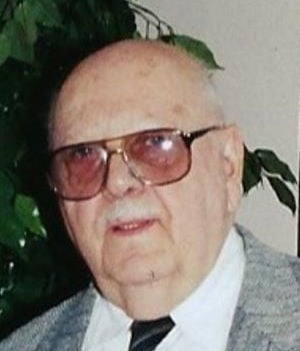 Mr. Jean was born on July 27, 1920, in Nashua. Son of the late Thomas and Elise (Archambault) Jean, he grew up in Nashua and moved to Keene in 1946 after serving as a radio service man in the U.S. Navy during World War II.

Jerry owned and operated Noel’s Music Store on Washington Street in Keene. He enjoyed singing and playing in his family band, known as the Jerry Jean Combo, as well as many clubs in the central New England area from the 1950s until the 1980s.

Upon his retirement, and after moving to Merrimack in 1988, he continued sharing his musical talents as Jerry Jean and his Bluegrass Picking Buddies, entertaining in senior centers and nursing homes in the greater Nashua and Manchester areas.

In lieu of a traditional wake and funeral, a Celebration of Life will be held this summer at the home of Peter and Christine Jean on Saturday, July 25, 2020, to commemorate his life. A graveside service will take place on Monday, July 27, 2020, at St. Louis Cemetery in Nashua. Family and friends planning to attend the celebration of life are asked to contact his son, Peter, at coachpeterjean@gmail.com.

Arrangements are in the care of the Farwell Funeral Service, 18 Lock St., Nashua (www.farwellfuneralservice.com).