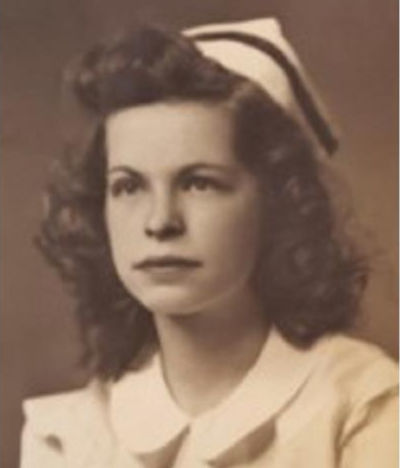 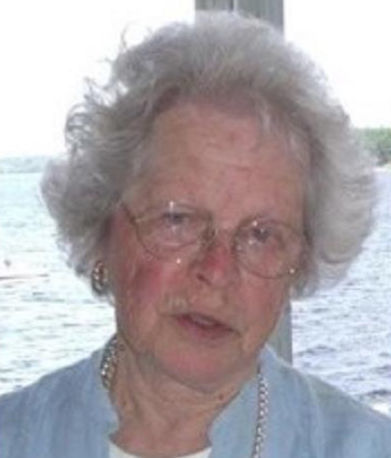 Eliza was born in Haverhill, Mass., on Dec. 10, 1923. She was the third child of Robert Bass Hebb and Clara Josephine Carver Hebb.

Eliza grew up in West Boxford, Mass., on her parents’ farm. During the Depression, she spent part of her childhood living with her grandparents, Eliza and George Carver, on their nearby farm. Her Grandmother Carver introduced Eliza to the value of manners, form and grace, as well as service to others. Together, they would prepare meals for the destitute who would stop at the farm. Eliza remembered with tenderness the families, and the sorrow their plight caused her. One of her favorite paintings was “The Gleaners” by Jean-Francois Millet, because Eliza’s family always left some crops in their fields and gardens for the local people in need. She wept when she thought of them.

Eliza graduated from high school in West Boxford in 1941. To make money to continue her education, she worked as the only cook at a Jewish girls’ camp, Camp Pioneer, in North Andover, Mass. For two summers she cooked three meals a day for 50 girls and, in her words, “I loved those little girls.”

In 1942 she enrolled in Essex County Agricultural School in Topsfield, Mass., where she studied homemaking, health care and child development. Upon completing her courses there, she attended the Boston School of Dental Nursing. Due to the war, her courses were accelerated and she completed a three-year program in two years. She was certified for General Dental Nursing and Dental Surgery Assistance. Upon graduation she worked in Boston up until her marriage.

Eliza met her future husband, Richard, at a church social at the age of 17. He told her much later that he had noticed her when she was 13 years old at a church supper and made sure to attend many church socials between their churches until she was old enough to court. Eliza and Richard were married on Aug. 24, 1946. While she was in hospice her children asked her if she could tell them what might have been the happiest moment in her life. She said, “The day I looked up the aisle at the West Boxford Congregational Church and saw your father waiting for me at the altar.”

Eliza and her husband started their family in 1947 in Groveland, Mass., and soon moved to Exeter, where they lived until “Dick” was offered an opportunity to work in Europe. In 1959, Eliza and Dick moved to Germany with 5 children, all age 12 and under, including 3-year-old twins, and a dog.

The family moved many times in Europe and with each move Eliza adapted with enthusiasm to the new culture, new people and a new corporate environment. She created a happy, warm and familiar home with every move. In urban settings she loved and adapted to the customs, food and fashions. In more rural settings she returned to her roots and gardened, foraged, and even learned to cook a variety of wild game that Dick had brought home. She entertained often, and with generosity and a real flair. Eliza was always enthusiastic about others and interested in their lives and endeavors. She had a wonderful sense of humor and a quick, sharp wit. She made many lasting friends in Europe and in the U.S. during those years and after she traveled with Dick to all parts of Europe and Asia.

Upon returning to the U.S. the family moved back to rural New Hampshire, where she settled back into small town America. With the children beginning to leave home, Eliza started an antique business specializing in silver, china, glass and decorative arts. In 1964, Dick and Eliza purchased the Charles S. Pennell house in Brunswick, Maine, where the family spent summers. In 1989, when Dick retired, they fulfilled their dream to live full-time in Maine when they moved to their home of 45 years on Middle Bay. While Dick fulfilled his desire to enjoy the natural world with his outdoor hobbies, Eliza developed her antique trade and became a respected antiquarian, and kept this business active into her early 90s. She also spent countless hours volunteering and fundraising for the Mid Coast Hospital. She played a role in art selection for the new hospital and curated auction items.

With failing eyesight, three years after Dick’s death, Eliza moved to Bay Square in Yarmouth where, true to her style, she made friends quickly and easily, and developed loving relationships with the remarkable staff at Bay Square. Throughout her life Eliza maintained her charming and unique sense of humor. While in hospice care, generations reached out to her to express their appreciation for her motherly counsel.

Eliza had a profound love for her nine grandchildren, and she was interested and involved with them and their families to her last days. Each of them spent time with her whenever possible, and all came to see her during her time in hospice.

Eliza’s family wants to express its deepest appreciation for the dedicated, professional and compassionate staff at Bay Square. Many members of the staff became very dear to her.

In lieu of flower arrangements, donations may be made to the Richard and Eliza Stark Endowment, Curtis Memorial Library, Brunswick, Maine, or to the Carol L. Stark ’72 Endowment for Summer Language Scholarship, Bates College, Lewiston, Maine.