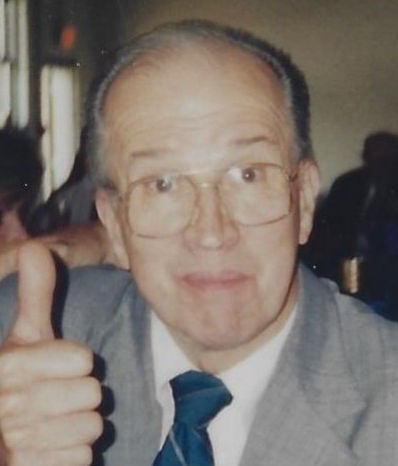 On Friday, Oct. 1, 2021, Dale William Freihofer Sr., loving husband, father, grandpa and friend, passed away surrounded by the love of his family.

As a child, a fire destroyed his family home. The entire family was rescued by a passing National Guard troop that just happened to be driving by. Dale’s family was able to rebuild the home, and it remains in the family today. Dale and Gloria purchased a home across from his old homestead and enjoyed raising their children right next door to his parents, and in later years enjoyed having their grandchildren, and then great-grandchildren, grow up next door to them.

Dale and Gloria also owned a camp on Newell Pond in Alstead when their children were small and maintained it until the early 2000s. The camp was a special place of joy for them and their family with a lot of time spent swimming, canoeing, reading, playing games and, of course, eating.

Dale worked at Markem Corporation until his retirement in August 1995. Even in retirement Dale kept busy with a small engine repair business out of his home. He could always be found tinkering away in his garage or working on the yard or house. He enjoyed many things, but found great joy in going for walks, hunting, fishing, cars, car racing and antiques. One vehicle that his grandchildren remember him for was his red Jeep that he kept for many years. He loved music and was known to play the harmonica and tap his feet to any beat that was going on. He also enjoyed dancing, especially with his Gloria. He always had a love of animals and raised beagles with his children for many years. He also had an incredible sweet tooth and loved ice cream and was always up for a Jim Dandy at Friendly’s.

Most important to Dale was his faith. Dale lived his life as one of Jehovah’s Witnesses and was a member of the West Swanzey Congregation. He spent much time teaching others the Bible and what God tells us about the future and about His Kingdom. Dale had a firm belief that the world conditions we see today will soon be replaced by a beautiful paradise right here on the Earth, a paradise in which Dale will be able to live in a peaceful world, without suffering, without disease, and where our loved ones never have to die again. Dale’s family especially appreciates the knowledge that when Dale wakes up again in God’s paradise world, he will no longer suffer and after many years living with Alzheimer’s, Dale will be the person God intended him to be, in perfect health. Revelations 21:4: “And he will wipe out every tear from their eyes, and death will be no more, neither will mourning nor outcry nor pain be anymore. The former things have passed away.”

The family wishes to extend a heartfelt thank you to the staff of Maplewood who have taken wonderful care of Dale. Services will be held on Saturday, Oct. 23, 2021, at 1 p.m. Due to the ongoing COVID pandemic, the services will be held via Zoom at the following link: https://us02web.zoom.us/j/85974508846?pwd=TUhHelZkTUlvSDdEbGN0ZllZQVlkdz09; Meeting ID: 859 7450 8846; Passcode: Freihofer.

To view an online memorial, leave a message of condolence, or for more information, please go to www.csnh.com.