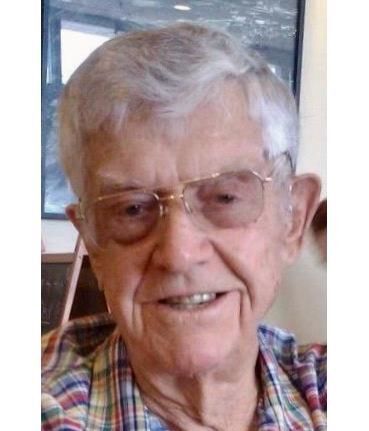 Dale H. Christopherson, 95, of Keene and Dublin, and Northport, Fla., died July 17, 2021, at home in Keene surrounded by his children.

He was born in Keene on July 21, 1925, the son of Carl A. and Elizabeth D. (Post) Christopherson. Dale grew up in Keene, and on the family farm on Old Homestead Highway, Swanzey.

Always the hard worker, as a child he helped his grandfather collecting garbage for the pigs. His life was spared one day on Baker Street as he leapt off the truck and was struck by a car. The elderly driver hadn’t noticed the incident and continued to drive home to Adams Street, with Dale hung by his shirt under the car, with all the neighborhood kids running and hollering for him to stop. Dale, unfazed unhooked his shirt and crawled from underneath the car as the old man went inside his home. Uninjured, Dale caught up with the truck and continued the route.

Dale left high school his sophomore year, 1942, to join the war effort in the U.S. Navy as an aviation machinist. His duties based him in the Admiralty Islands. With the end of World War II, he was discharged from active duty in 1946. The city of Keene as well as many other communities around the country allowed these young war veterans to return to high school and complete their education. Dale graduated among other veterans with the famed Keene High School Class of 1947. Many special privileges were afforded to these “seniors.”

In 1949, Dale married Patricia C. McKernon of Keene. When the Navy recalled Dale for the Korean War, the two were stationed stateside in Jacksonville, Fla. The two considered this period in Florida as their “honeymoon.”

Returning to civilian life and Keene again in 1952, Dale and Pat raised a family. Dale and Pat purchased land by Stone Pond in Dublin and built a summer cottage, which was enjoyed by their children as they grew. Dale worked at the A&P Grocery, Red Roof Restaurant and retired in 1987 after 32 years with PSNH. Dale was a member of the Monadnock Lions Club, VFW and Holiday Park Men’s Club.

Sadly, Pat passed away in 2018. Survivors include his children: Jennie (John) Newcombe of Keene; Andrea (Steven) Cook of Sonoma, Calif.; and Mark (Pepi) Christopherson of Keene. His daughter, Keron Ainsworth, of Winchester, predeceased him. He also leaves behind nine very loving grandchildren; many great-grandchildren; many nieces and nephews; and a son-in-law, Jack Ainsworth, of Winchester. Dale is also predeceased by a brother, Carl P. Christopherson; and a sister-in-law, Marguerite Christopherson.

At Dale’s request, there will be no services. Contributions may be made to Saint Francis Chapel on Stone Pond at SFC, c/o Bonnie Johnson, 50 Shaker Farm Road North, Marlborough NH 03455. Make checks payable to “Saint Francis Chapel.”

The Fletcher Funeral Home of Keene is assisting the family with the arrangements. To offer online condolences to the family or to share special memories, please visit www.fletcherfuneralhome.com.