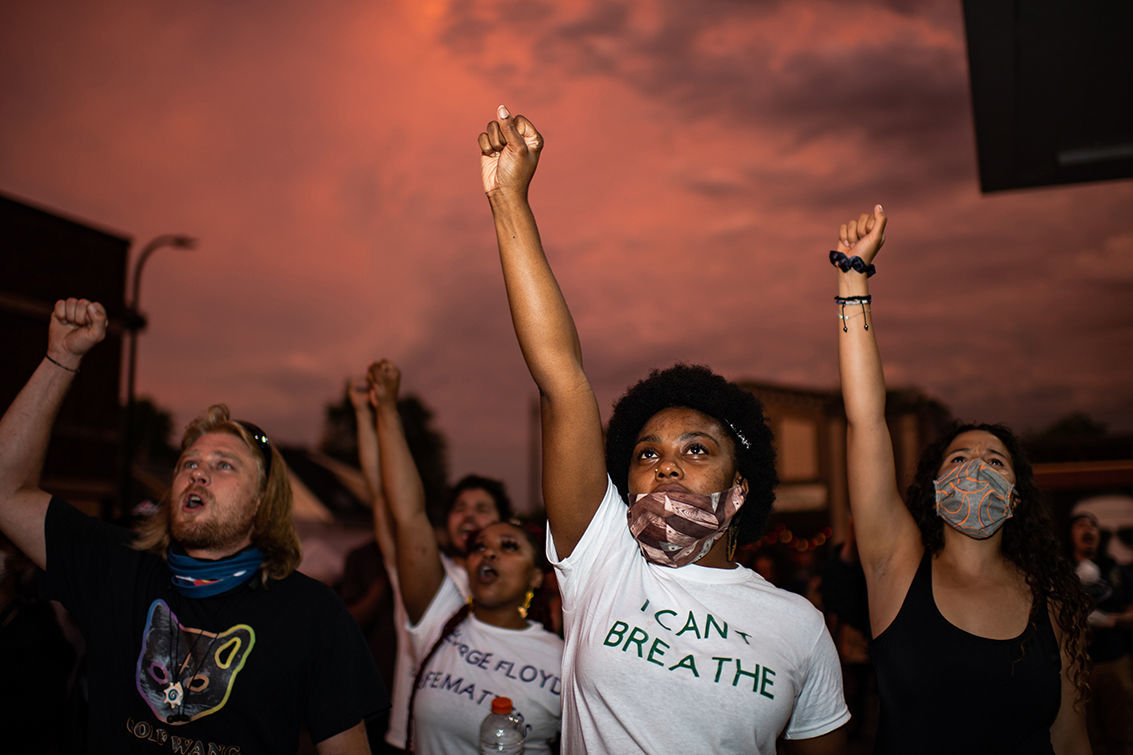 Protesters chant “Say His Name — George Floyd!” near a memorial for George Floyd in Minneapolis on June 2. MUST CREDIT: Washington Post photo by Salwan Georges. 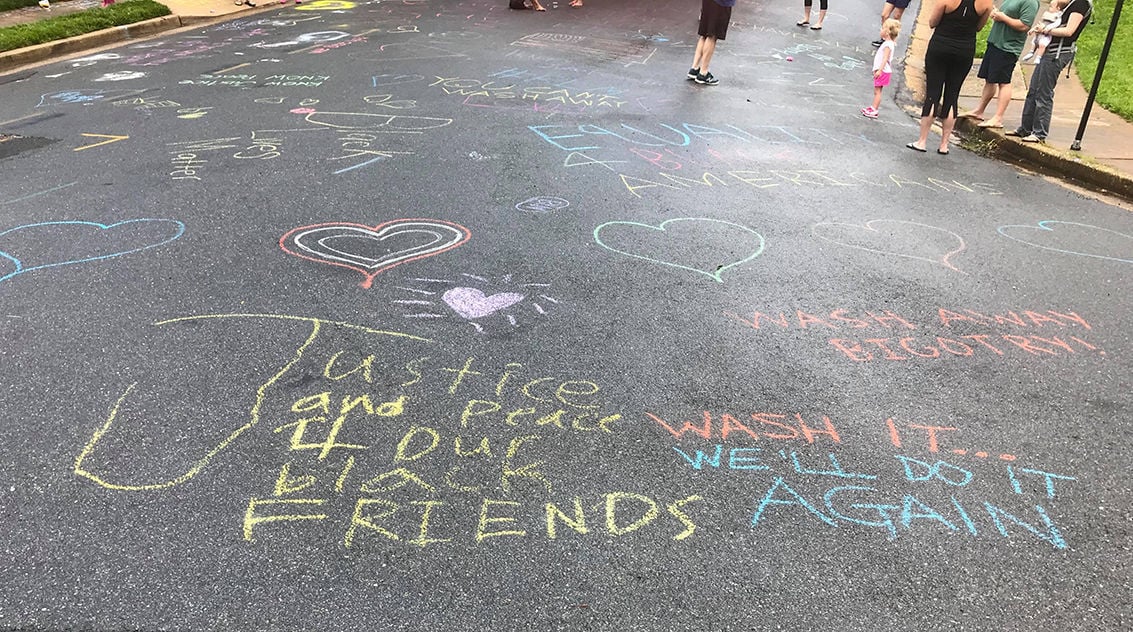 Residents of Arlington, Va., wrote new chalk messages June 19 in support of black neighbors after their protest messages were power-washed away by county workers.

Protesters chant “Say His Name — George Floyd!” near a memorial for George Floyd in Minneapolis on June 2. MUST CREDIT: Washington Post photo by Salwan Georges.

Residents of Arlington, Va., wrote new chalk messages June 19 in support of black neighbors after their protest messages were power-washed away by county workers.

The world feels broken right now — not just cracked in a few places but shattered in a million pieces. It’s been this way for centuries, of course, but many Americans — white Americans — are just starting to wake up and grapple with the depth of this country’s deeply rooted racism, as well as the role they played in making it so.

Research suggests that we need to confront our unfounded assumptions about how and why racism develops, and then we need to engage with our children regularly about race, racism and anti-racism. This is something that parents of color do regularly, because they have to; white parents need to do it, too.

One of the biggest misconceptions white parents have is that their children don’t notice race unless it is pointed out to them. The underlying assumption is that children only become racist if they are taught to be. In fact, research clearly shows the opposite: Kids develop racial prejudice unless their parents or teachers directly engage with them about it.

In a 2005 study, psychologist David J. Kelly and his colleagues found that 3-month-old babies can distinguish faces on the basis of race and show preferences toward faces of their own race. By the time kids are toddlers, they behave in prejudiced ways, too.

In a landmark study, developmental psychologist Phyllis Katz, founder of the Institute for Research on Social Problems in Colorado, regularly observed more than 200 children, half of them black and half white, from the time they were 6 months old until they were nearly 6 years old.

“I think it is fair to say that at no point in the study did the children exhibit the Rousseau type of colorblindness that many adults expect,” Katz wrote in a 2003 summary in American Psychologist. When 3-year-olds were shown photos of children of different races and asked to choose whom they might like to be friends with, one-third of the black kids chose photos only of other black kids, but 86 percent of the white kids chose photos only of other white kids.

Naomi O’Brien, a black parent and primary school educator in Denver, says she sees her white students saying and doing racist things all the time. They’ll say, “ ‘Well, because their skin is black, or their skin is like mud, or their skin looks dirty, I don’t want to sit next to them,’ ” O’Brien says. “And then their parents come to you wondering why you brought up race to their child who ‘doesn’t see color,’ even though they just made somebody feel less than or hurt their friend’s feelings strictly based on race.”

Kids develop racial prejudices for a number of reasons. For one thing, they can readily see how race and power intersect in the world around them. They notice that the heroes in their TV shows are usually white (and often, the bad guys are not), that most politicians are white, that the wealthiest families at school are white. They notice schools and communities tend to self-segregate by race, which confirms their suspicion that race is an important social construct.

In her book “Why Are All the Black Kids Sitting Together in the Cafeteria? And Other Conversations About Race,” Spelman College psychologist Beverly Tatum writes that “cultural racism — the cultural images and messages that affirm the assumed superiority of Whites and the assumed inferiority of people of color — is like a smog in the air. Sometimes it is so thick it is visible, other times it is less apparent, but always, day in and day out, we are breathing it in.”

So kids breathe this racially charged air, and if their parents and teachers don’t help to explain to them what race means (and what it doesn’t), kids start to create their own narratives. They often infer that racial hierarchies exist because of innate differences among people of different races and so start to believe that whites are privileged because they are inherently better and smarter. “They think there has to be a reason and no one explains it, so then they make up reasons — and a lot of kids make up biased, racist reasons,” explains Rebecca Bigler, a professor emeritus at the University of Texas at Austin, who has spent decades studying how prejudice develops in kids.

Other psychological tendencies also fuel racism in children. Kids are “essentialist” thinkers, meaning they assume that if people are the same on the outside, they must also be the same on the inside.

They also use transductive reasoning, assuming that when people are alike in one way (such as skin color) they are alike in other ways as well (e.g. they are all equally smart or capable). Kids show what’s called “in-group” bias, too, which means that they tend to prefer people who are members of groups they also belong to; children may subconsciously think, This kid looks like me, therefore I like him, and, conversely, This kid doesn’t look like me, so I’ll keep my distance.

So how do we unravel and challenge the racist ideas that form in our kids’ minds? We must, for a start, have regular conversations with them about race and skin color. In a study published in 2011, Brigitte Vittrup, a developmental psychologist at Texas Woman’s University, and George Holden, a psychologist at Southern Methodist University, asked parents to discuss race with their 5- to 7-year-old white kids over the course of a week. Afterward, the kids who had these conversations with their parents showed less racial bias than the kids who didn’t.

Unfortunately, though, white parents rarely have conversations about race with their kids, even when race seems like an obvious thing to discuss. In the same 2012 study mentioned earlier, researchers videotaped the mothers as they read a race-themed book to their 4- and 5-year-olds. Somehow, 94 percent of the mothers managed to read the book “without making any comments about race or ethnicity, diversity, or intergroup contact,” the authors wrote.

Even when the kids asked their mothers specific questions about race, the mothers tended to avoid answering them. Some of the mothers alluded to race, saying vague things like “we should treat everyone equally” or “even if we look different, we’re all the same on the inside,” but rarely did the mothers explicitly discuss skin color or racial differences.

This is a problem because young kids often don’t interpret vague references to race as being about race. In a 2010 study, researchers at Northwestern University and other institutions had elementary school students read a book about a teacher’s efforts to promote racial equality.

For half of the students, the teacher’s efforts were described vaguely, like “we need to focus on how similar we are to our neighbors rather than how we are different.” For the other half, the teacher referred explicitly to race, in that she said things like “we want to show everyone that race is important because our racial differences make each of us special.”

After the students read the books, they were tested to see how well they could recognize racism portrayed in short vignettes. The kids who heard the teacher explicitly refer to race were better at identifying bias than the kids who were given vague messages about kindness and equality.

When kids ask things like “why does that lady have dark skin?” white parents often shame or shush their kids because they’re not sure how to respond or because they’re worried the question itself is offensive. We should remind ourselves that our kids were just being inquisitive and that shushing them sends the message that they aren’t allowed to ask or learn about race.

“In general, kids are asking questions out of curiosity and trying to understand,” says Nia Heard-Garris, a pediatrician at Northwestern’s Feinberg School of Medicine and the chair and founding member of the American Academy of Pediatrics’ Provisional Section of Minority Health, Equity, and Inclusion. If we shush our kids for asking about race, we are telling them that race is taboo and not something they can talk to you about, which means they’ll be left to fill in the blanks themselves in potentially prejudiced ways.

The more we can lean into conversations about race, even if they make us uncomfortable, the better. “I always say, ‘Stop being weird about race’ — the more we talk about it and see color, [the more] it gets normalized,” says LaNesha Tabb, a primary educator and black mother who lives in Indianapolis and co-creator of Education with an Apron to educate parents on talking with their kids about race and racism.

So what should you tell your kids about race? Start by explaining why skin colors vary: because of how much melanin people have in their skin. You can emphasize across-race similarities and between-race differences; you might point out that your child and her friend are both white but are different in various ways.

If your kids say or do something racist, you should help them understand why it was not OK. Tabb and O’Brien suggest saying something like, “Thank you for being honest. I’ve felt that way before, too, but here’s why that’s racist and wrong.”

Intention doesn’t matter; even if your child didn’t mean to say or do something racist, it nevertheless did harm, and they need to know that. Likewise, it’s important to remember that we can do racist things even if we don’t think of ourselves as racist. “Everyone’s definition of racism is, like, the Ku Klux Klan. If you’re not wearing a white hood, then you can’t be racist. And you absolutely can be,” Tabb says.

Use momentum of the moment

Right now, of course, there are ample ways and reasons to bring up the topic of race and racism, even with little kids.

In fact, white parents can do a lot more than just talk to kids about race. They can lead by example and help kids understand the importance of being anti-racist, actively fighting against racist norms and policies. If you witness someone saying something racist, challenge them (ideally in front of your kids), Tabb suggests.

Brainstorm ways together to get involved in the Black Lives Matter movement. If you don’t feel comfortable bringing your family to protests, have your kids organize something smaller and local. Make signs for your yard or your front window. Kids can write letters to politicians or help you choose which charities to donate to. “It’s really important to show kids at a young age that things can be changed, and to not feel helpless or powerless,” Heard-Garris says.

We and our children need to keep growing and understanding, even when the momentum of the moment dies down. Engage your kids with the issue of race even (if not especially) when diversity is absent. If you watch a show together and notice that all the characters are white, talk about race and white privilege. (Why do you think all the kids in this show are white? How do you think black kids who watch this show feel?) It’s crucial that we help our children see that black voices are absent from so many important conversations, that black faces are absent from so many spheres of society, to recognize the persistent injustice and demand lasting change.

Moyer is a science and parenting writer.