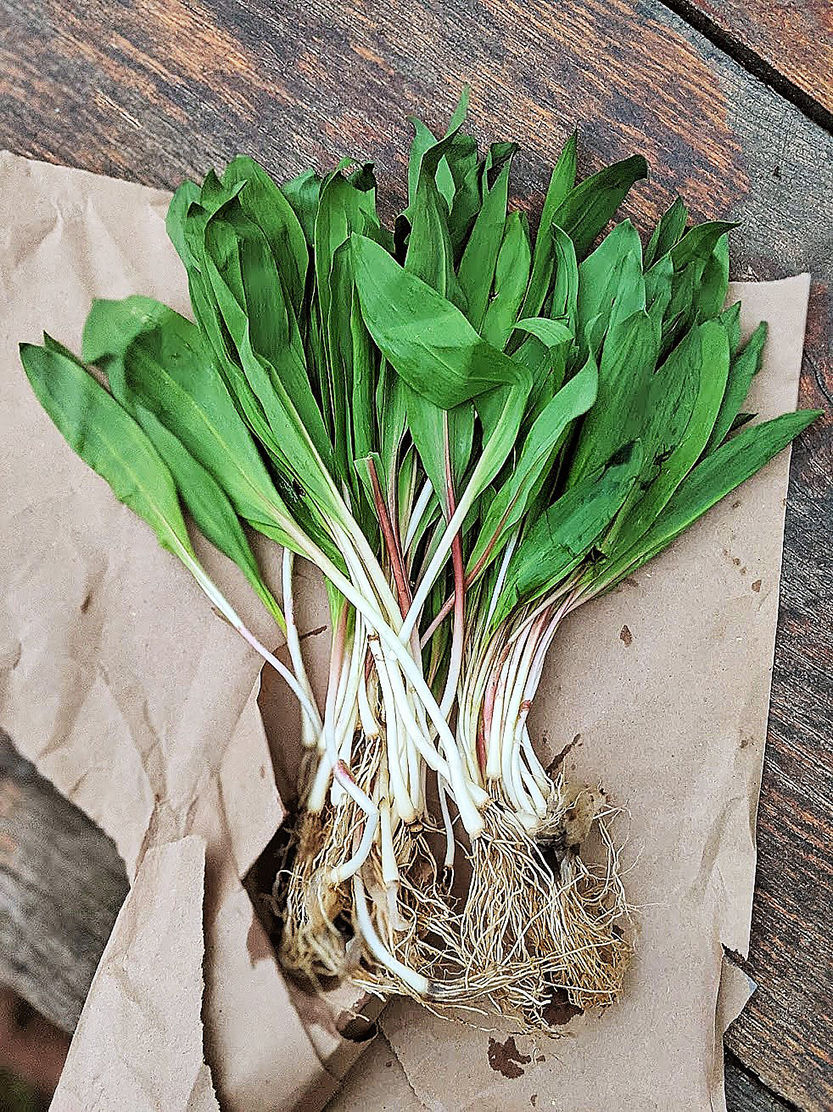 Ramps, sometimes called wild leeks, look like scallions but have a stronger garlicky flavor. They grow wild in Appalachian regions in the spring. (Gretchen McKay/Post-Gazette/TNS) 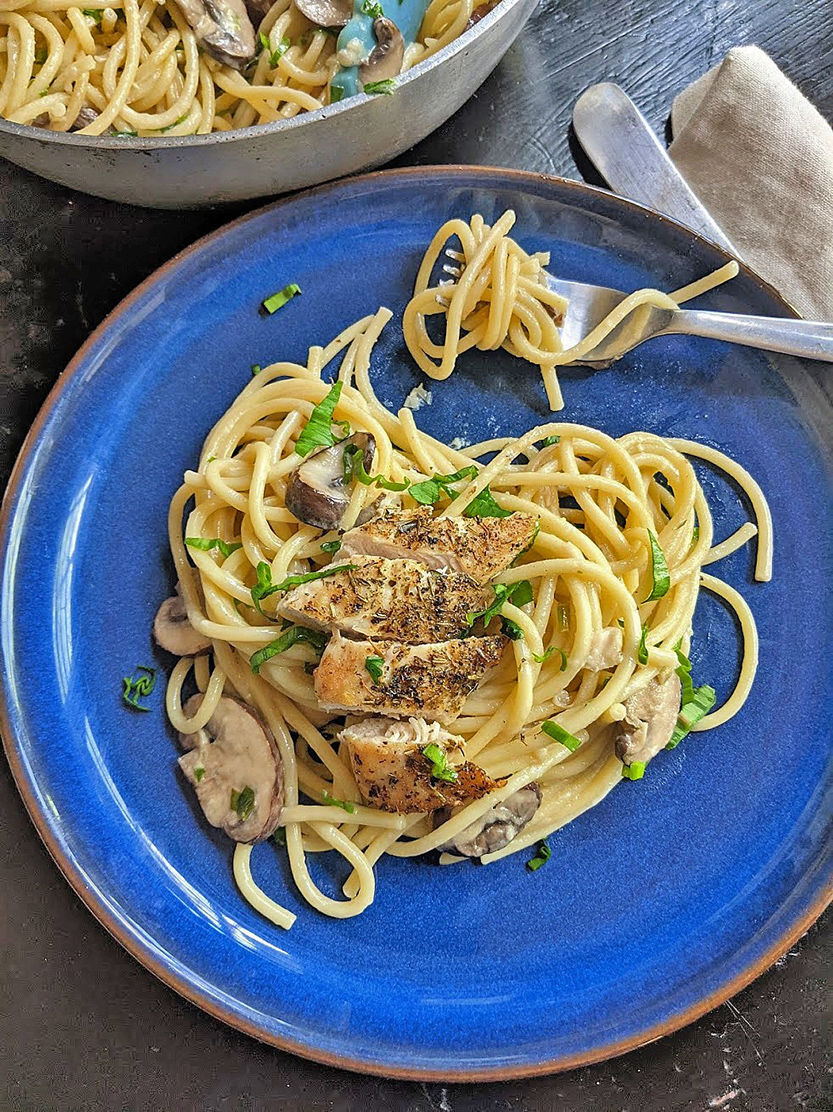 Ramps, sometimes called wild leeks, look like scallions but have a stronger garlicky flavor. They grow wild in Appalachian regions in the spring. (Gretchen McKay/Post-Gazette/TNS)

PITTSBURGH — Cavan Patterson, 39, has been foraging for mushrooms and other wild edibles for more than a decade. Most make their way into local kitchens via Wild Purveyors, the company he founded in 2009 with his brother, Tom.

A few weeks ago, he was on the hunt for the elusive morel mushrooms, one of the first fungi to poke through the ground in hardwood forests in spring.

The Fox Chapel, Pa., native gets just as giddy when he spies a verdant, backwoods patch of Allium tricoccom, the spring delicacy known as ramps.

An onion-like member of the lily family, ramps look like scallions but taste like a cross between onion and garlic. Because of their short growing season and limited availability — someone has to hike deep into the woods to forage them — ramps have almost a cult following.

Unless they’re pickling the white parts, chefs at upscale restaurants and adventurous home cooks have only about four weeks to use the floppy leaves and white bulbs in sauces, soups, salads and stir fries. And they pay prettily for the privilege, with a quarter-pound bunch of ramps costing about $5.

Which explains why Patterson, who now lives in Chambersburg, Pa., couldn’t help but shout in delight on a recent Tuesday when a patch of sunshine cast light on a sea of green beneath elm and maple trees in Fayette County.

A smattering of trout lilies and blue cohosh along the wooded trail hinted at the possibility of ramps. But he hadn’t foraged there in years, so he wasn’t sure what he’d find in this stretch on private land.

As the consumption of ramps has expanded in recent years, more people are out in the woods looking for them. When they succeed, not everyone is a good steward of the environment.

It takes up to 18 months for ramp seeds to germinate and four or five years to grow into harvestable plants. Ramps grow so slowly that a patch spreads by less than 10 percent a year. So if more than 10 percent of the patch is picked over the course of a season, it won’t be able to rebound the following year.

“People who don’t know their biology ... see them and get excited, and then pick them all and feel bad,” he says.

Patches near urban areas are most at risk of overharvesting because they’re more accessible — and it’s almost impossible to tell who has been there before you and how much they picked.

On this sunny morning in late April, though, Patterson is in luck. A short uphill hike along an abandoned logging road leads to a sweeping hillside and a valley blanketed in ramps. Tens of thousands of the pungent little clusters grow among the trees. He smiles as he sets down the plastic laundry bin he carried into the woods with a shovel on his shoulder. Over the next hour, he’ll carefully dig about 15 pounds of ramps, which he’ll then rinse in a nearby creek before loading into his truck for the trip back to Pittsburgh. It’s taxing work, but the rewards are worth it.

Grown up and down the East Coast, from Georgia to Canada, ramps have been collected as both a food and medicinal item for generations. Indigenous Americans consumed ramps to remedy colds and treat intestinal worms. According to the journal Material Culture, the Scots and Irish who settled in Appalachia in the 1800s also collected and ate them, most likely because they were similar to the bear’s garlic they ate back in Europe.

Yet ramps are more than just a regional specialty, says Penn State grad student Cathryn Pugh, who is studying the importance of ramps to Pennsylvanians and residents of the Mid-Atlantic region. (You can participate in her survey at sites.psu.edu/theramppage.) The garlicky greens are also a cultural icon for West Virginians, especially for rural folks who at one time relied on them for survival.

After a long winter of eating only dried beans, root vegetables and other stored food, the leafy greens with their high levels of vitamin C may have saved a lot of people from scurvy.

“It was the first green to come up in the forest, so people looked forward to it, almost as a spring tonic,” says Pugh.

Known for their pungent odor, ramps were stigmatized as a stinky, poor person’s food because eating them suggested you couldn’t afford to buy greens at a grocery store. They wouldn’t become a source of pride and local identity until sometime in the 1940s, when festivals and dinners celebrating ramps helped reframe them as a sought-after spring delicacy.

By the 1950s, ramps had such a strong local identity that Jim Comstock, the iconoclastic editor of the now-defunct West Virginia Hillbilly weekly, not only ate them at his desk but famously added ramp juice to the ink of a special edition announcing the annual ramp festival in Richwood. The papers reportedly gave off such a terrible stench that he received a rebuke from the postmaster general.

Ramps didn’t start popping up in urban areas until around 20 years ago, when the local food movement took hold. They gained even more momentum when celebrity chefs such as Martha Stewart and magazines like Better Homes and Gardens started singing their praises. Whole Foods began carrying ramps around 2010, and today you find them on the menu as a seasonal item at many upscale restaurants.

“You used to pay a couple of bucks for a mess of ramps on the side of the road in West Virginia,” Pugh says. Today, they’re $20 a pound in Philadelphia, Pittsburgh and New York City.

With social-distancing guidelines keeping workers out of the office this past year, people have had more opportunities to forage. Pugh sometimes worries when fans post pictures showing huge ramp harvests on the Wild Ramps and Leeks of Pennsylvania Facebook page she started in 2020.

Then, again, it’s common for foragers to keep their locations secret, so the hauls could be perfectly sustainable.

While Pennsylvania is not currently listed as a place of concern for overharvesting, other states and cities haven’t been so lucky. Quebec in 1995 banned ramp foraging for commercial purposes and since 2002, it’s been illegal to collect them in Great Smoky Mountains National Park.

A general rule among ethical foragers is to take no more than 10 percent. Pugh suggests focusing on density rather than percentages: For each 10- by 10-foot spot, harvest as many bulbs as you like so long as you leave at least 88 plants behind. “That lets the population exist.”

Others recommend the Cherokee method of collecting them. Instead of clearing away leaf litter and yanking the entire plant out of the ground, Patterson suggests cutting ramps on the diagonal, and leaving the majority of the bulb and its root system in the ground. Or limit your snipping to just one leaf, leaving the bulb and the second and third leaves to continue growing.

Foragers should also avoid harvesting ramps that are flowering, or about to flower, so the seeds will scatter in early fall. And of course you shouldn’t dig on private land without permission.

If the patch looks thin, leave it be, says Patterson.

Perhaps most important: Never take more than you’ll use. For ramps to return year after year, “there needs to be a certain degree of stewardship” he says.

Ramps are best used within a day or so of being harvested but will keep uncleaned for a few days at room temperature on the counter, with their bulbs submerged in water like a bouquet of flowers. They’re incredibly dirty, so be sure to rinse them well under cool running water before using, especially where the leaves meet the stem. Gently pat dry with a paper towel. You’ll also want to peel away the thin, papery membrane that hugs the bulb and discard any big, tough leaves.

Cleaned ramps will keep for up to a week in the fridge wrapped loosely in moist paper towels and placed in an unsealed zip-top bag.

Ramps grow best in forest habitats where there is ample shade and rich, moist soil. But you also can try growing them at home if you have a nice shady spot and patience. Simply plant the roots with a portion of the attached bulb base in your garden or the woods behind your house, says Patterson. Pugh has also heard of people having success growing ramps in flower pots.

If you’d rather try seeds, Gates Hill Farm in Franklin, Vt., sells packets of 50 seeds for $6. Just remember it will take up to two years for them to germinate.

Owner Devin Bachelder is also among a handful of ramp farmers who sell bulbs — more than 10,000 this year alone — along with ready-to-eat ramps, though both sell out very quickly.

“There’s a lot of demand, and we have a dedicated following,” he says.

Like most alliums, ramps can be cooked or served raw. Patterson likes them best fresh, so you can see and appreciate the flavor — in a vinaigrette, kimchi or chimichurri, for instance. You can also add them to pasta dough, stir into rice dishes, use grilled or sautéed as a topping for pizza or bruschetta, or toss them in a salad. They’re also delicious processed and whipped into a compound butter.

This zesty herb sauce is a great first step if you’re unfamiliar with ramps or can find only a small quantity. It’s great spooned on top of grilled steak, chicken, fish or eggs.

Combine ramps, cilantro, shallot, olive oil, vinegar, red pepper flakes and a generous pinch of salt in a bowl, Stir together and taste; adjust the seasonings as preferred. The chimichurri can be made up to two hours ahead. Makes about one cup.

This recipe is a favorite of Cavan Patterson of Wild Purveyors in Pittsburgh. It’s great with eggs in any style, he says. “Crepes are nice and fancy, though.”

2 cups roughly chopped kale or any other hearty green

Prepare ramps: If there are roots attached, cut the bulb in half or separate the roots by cutting approximately one-half inch into the stem. Set the roots and bulb base aside in a cup of water filled just to cover. Separate the stems from the leaves. Finely chop the stems and the bulb. Julienne the leaves or cut into strips.

Make crepe batter: Crack eggs into a medium mixing bowl. Add three tablespoons of cream and stir briskly to combine. Add flour a bit at a time while whisking to combine thoroughly.

In a small bowl, mix yogurt and two tablespoons of cream until smooth. Add half the julienned ramp leaves and fold in to combine.

Place mushrooms in a hot dry pan and saute for three to five minutes, or until brown. Add two to three tablespoons olive oil and mix to coat mushrooms. Add all of the chopped ramp stems and bulbs. Sauté on medium heat for one minute. Add the greens and remaining cream and mix thoroughly over medium heat. Cover and turn off the heat.

Prepare crepes: Heat a clean, lightly oiled pan over medium high. Once hot, ladle in one to two ounces of crepe batter. Roll batter around the pan to create a thin layer. After 30 seconds to one minute, ease a spatula under and flip as edges curl up. Allow to cook an additional 20 to 30 seconds; then remove to a plate.

Spoon a row of mushroom and greens mixture into the middle of the crepe. Fold over one side and roll it. Spoon ramp yogurt next to crepe. Sprinkle with julienned ramps over the crepe and yogurt. Repeat.