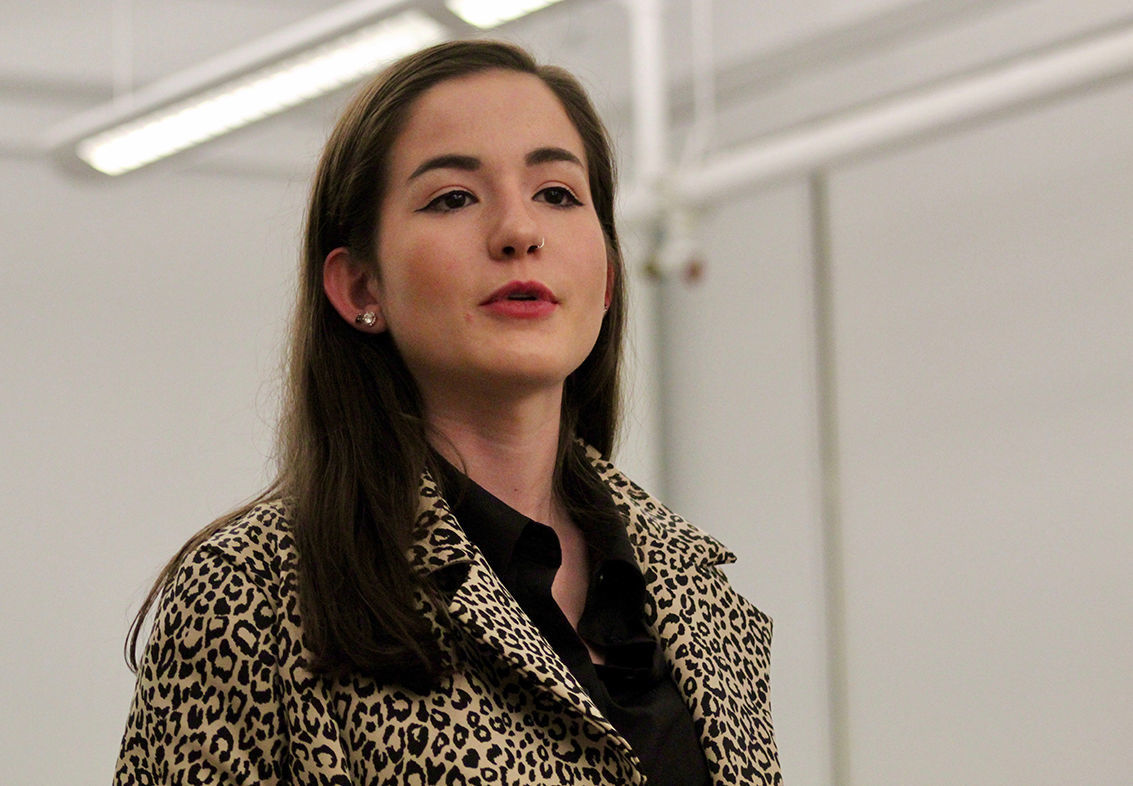 Keene State College senior Lindsey Sitaro, 21, talks about her personal experience with tobacco use at the Keene Family YMCA Thursday night. The Y’s Community Coalition on Youth Substance Use hosted an event to discuss raising the state’s legal age for tobacco use and purchase to 21. 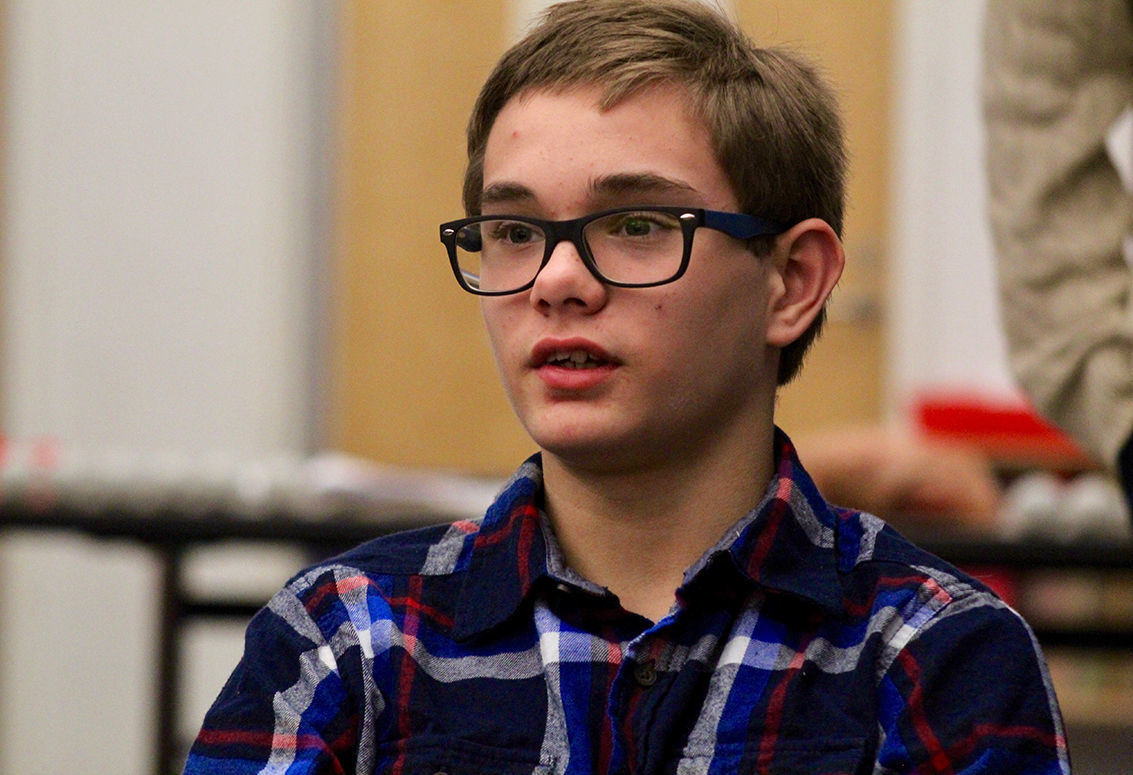 Ben Calderwood of Hinsdale, 13, asks local experts about the risks of tobacco use at the Keene Family YMCA’s Community Coalition on Youth Substance Use event Thursday night.

Keene State College senior Lindsey Sitaro, 21, talks about her personal experience with tobacco use at the Keene Family YMCA Thursday night. The Y’s Community Coalition on Youth Substance Use hosted an event to discuss raising the state’s legal age for tobacco use and purchase to 21.

Ben Calderwood of Hinsdale, 13, asks local experts about the risks of tobacco use at the Keene Family YMCA’s Community Coalition on Youth Substance Use event Thursday night.

As lawmakers in Concord consider bumping up the tobacco age statewide, area residents gathered in Keene Thursday to discuss the dangers of youth smoking and vaping.

Hosted by the Keene Family YMCA’s Community Coalition on Youth Substance Use, the hour-long event focused on two pieces of legislation — Senate Bill 248 and House Bill 1662 — that would raise the legal age to buy, possess or use tobacco in New Hampshire.

The Senate bill — whose co-sponsors include N.H. Sens. Jay Kahn, D-Keene, and Martha Hennessey, D-Hanover — passed the Senate and was referred to the House’s Commerce and Consumer Affairs Committee last month.

The House bill, which came out of the Commerce and Consumer Affairs Committee with a recommendation of ought to pass with an amendment, will be voted on by the House on Wednesday.

The state’s current purchase age for these products is 19, although some communities have established a different minimum through their own ordinances.

In December 2018, Keene became the second community in New Hampshire to raise the age for purchase, possession and use of tobacco products to 21. Although other municipalities have since followed suit, the Elm City remains the only one in the Monadnock Region.

Neighboring Maine, Vermont and Massachusetts are among the 19 states that have also raised the age to 21, and at the end of last year, Congress passed a nationwide law to increase the minimum age for sale of all tobacco products to 21.

However, the law does not preempt states or municipalities from passing their own age-restriction rules, and attendees Thursday noted that the different laws are confusing.

“When I’ve had a conversation with our chief of police in Winchester ... if he were to come across someone who was 19 who was in possession or trying to purchase tobacco products, he can’t do anything about it,” said Missy Calderwood, drug-free community coordinator for We’ve Got Your Back in Winchester. “Federally, yeah, [the person’s] breaking the law, but state-wise, he’s not.”

Raising the sale age to 21 across New Hampshire, she added, would clear up any discrepancy.

While others agreed with her, most who spoke Thursday said youth vaping is the main reason they want to see the state law changed.

Vaping refers to inhaling vapor from a device such as an e-cigarette, which frequently involves heating a liquid that can contain nicotine, marijuana or other substances. Those active ingredients are delivered in solvents.

Because e-cigarettes contain nicotine derived from tobacco, the U.S. Food and Drug Administration established a new rule in 2016 allowing the devices and liquid solutions to be government-regulated as tobacco products.

Although e-cigarettes are often touted as a safer alternative to smoking, thousands of vaping-associated lung injuries have been reported nationwide.

As of Feb. 4, at least 2,758 vaping-associated lung injuries and 64 deaths had been flagged to the CDC since June. Three cases have been tallied in New Hampshire, none of them fatal.

Vitamin E acetate — oil derived from vitamin E that typically does not cause harm when ingested or applied to the skin — is one of the potential leads in the CDC’s investigation into the illnesses, though the exact cause hasn’t been determined.

Twenty-four percent of high school students in the state said they’d used a vaping product in 2017, according to data provided by the N.H. Department of Health and Human Services, compared to 13 percent nationwide.

For the Monadnock Region, the rate was 18 percent.

“In the short time that I’ve been out meeting with people about e-cigarette use and vaping, there is a lot of confusion in New Hampshire around the law,” said Peter Sebert, YMCA program director. “The biggest fear I have is, it sends and contributes to that false narrative that e-cigarette use, or especially vaping, is somewhat safe.”

Lindsey Sitaro, a senior at Keene State College, said she’d been under this impression.

She told the room of 12 people, including Kahn, she had smoked tobacco for three years, and used a Juul, a popular vaping device, for about a year after a friend handed her one to try.

“I know for me, it was definitely a social thing,” said Sitaro, 21.

But she said she experienced several short-term effects that aren’t often discussed.

“The juice in the pods will leak, and you’ll have this highly concentrated nicotine juice on your lips, and nicotine poisoning would happen a lot. I’d be late to class or something because I’d be puking in the bathroom before,” she said.

Sarah Lavoie of Keene — whose story was shared by Dane Levis of the Concord-based nonprofit organization New Futures because she couldn’t attend Thursday’s event — wondered if she’d be addicted to nicotine if the legal age had been higher when she was younger.

“By 21, I was far more mature and knew then I should’ve never started smoking when I was 19,” Lavoie’s statement read. “That was 17 years ago, and I’ve only recently been able to put it down and stay away from it for a longer amount of time ... just think if the age had been raised to 21 all those years ago, this roller-coaster of nicotine and tobacco addiction had a better chance of not happening to me.”

The Y’s community coalition on youth substance use, formed in 2018, is focused on reducing alcohol and e-cigarette use among young people through community-based initiatives.

The next Community Coalition on Youth Substance Use meeting will be held Thursday from 3 p.m. to 4 p.m. at Monadnock Regional High School in Swanzey. Community members are welcome to attend.

Correction: The House bill that came out of committee would raise the tobacco age to 21. This was incorrect in an earlier version of this article.