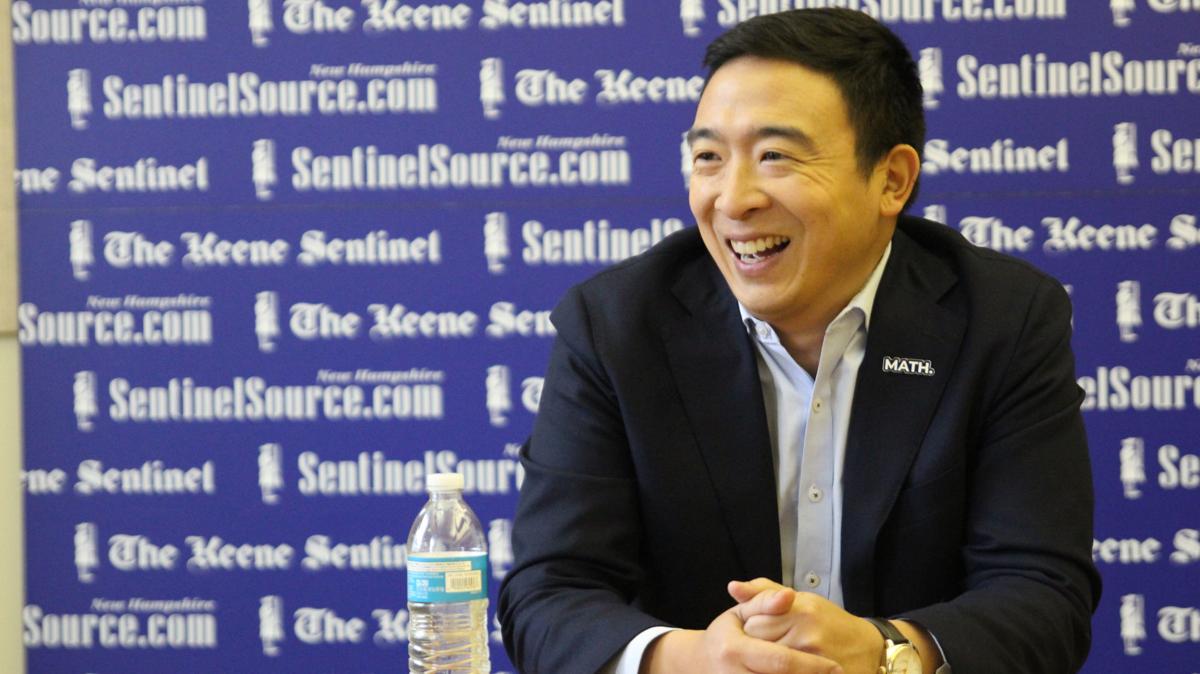 Andrew Yang talks to editors at The Sentinel Monday. 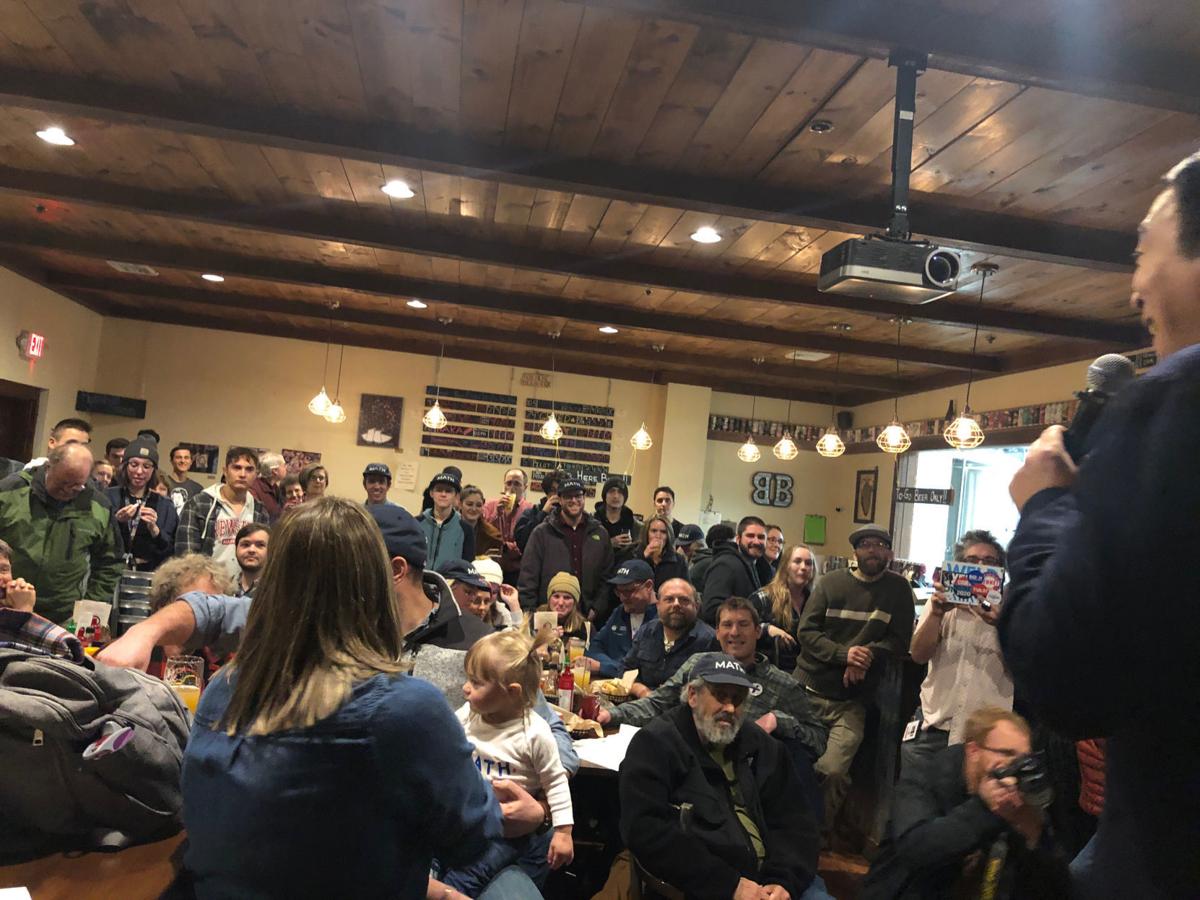 Andrew Yang talks to editors at The Sentinel Monday.

In a sea of MATH hats Monday night at Branch and Blade Brewing Co. in Keene, Julianna Dodson of Spofford raised her hand to ask Andrew Yang a tough question.

Yang, 44 — a Democratic presidential hopeful and tech entrepreneur — already looked jovial before the crowd of well over 50 packed into the Bradco Street brewery. But when he found out Dodson is an accountant, his face lit up.

“I love the CPA question!” Yang quipped, not too long before beginning to snap his fingers three times in a row, as he often does when getting into the meat and potatoes of an issue.

Yang has centered his campaign’s messaging largely around a universal basic income “Freedom Dividend” of $1,000 a month for every American adult — which he argues would “take the boot off the throat” of workers increasingly displaced by automation — and Dodson, 30, wanted to know how he would pay for it.

She asked about how he would use a value-added tax to get the revenue, and what his plans would be for “trimming the fat” on government spending.

With some of the lowest speaking times during this Democratic presidential primary’s televised debates — despite rising in the polls past senators, governors and other better-known competitors — Yang seemed to relish the chance to get into the weeds on how he’d pay for his plan.

Earlier in the day, the Schenectady, N.Y., native had an even longer exchange on how he’d cover the $1,000 a month Americans could opt into under his potential administration during an interview with The Sentinel’s editorial board.

In response to a question on how he would address the nation’s more than $22 trillion debt, Yang said taxing the rich simply wouldn’t be enough, and that his plan for a value-added tax — essentially a varying fee on every transaction of services in a given location — would be a better option than a wealth tax, as proposed by his competitor, U.S. Sen. Elizabeth Warren of Massachusetts.

Yang told the editorial board he would put a higher percentage on technology-related transactions than basic goods like diapers and dairy products. (Find the full audio here.)

At The Sentinel, he used the example of Amazon paying zero in taxes on its $11 billion in profits in 2018, which would be impossible under his value-added tax — not to mention, he joked, what would be owed on all of the expenses its CEO, Jeff Bezos, pays on sending rockets into space.

“You get a toll on all of the major value flows, which then ends up funding a thousand bucks a month in our hands, which ends up making us stronger, healthier ... all of the good things you would want to see in an economy and society,” Yang said.

Some of the tax would come down on consumers, he said, but with an additional $12,000 per year in spending power and adjusted tax rates to exempt more-necessary consumption — groceries, compared to a luxury watch, for example — Yang said only the top 6 percent of American income earners would end up paying more toward the value-added tax than they get in return through the Freedom Dividend.

Countries such as Japan, Canada, China, India and the entire European Union have implemented a value-added tax, with the United States remaining one of the few outliers along with the likes of North Korea, Angola, Saudi Arabia and Greenland.

Yang argued that the value-added tax’s success abroad makes it a much more compelling option than a wealth tax.

Versions of a wealth tax — which takes revenue from assets exceeding a certain amount of money, such as a net worth of $50 million, as Warren proposes — have been rolled back throughout Europe, most recently in France, with only Norway, Spain and Switzerland maintaining the policy as of this year.

“... All of these countries that tried a wealth tax found that there were massive implementation and compliance problems, and it did not generate anywhere near the revenue they were hoping for,” Yang told The Sentinel. “So the fact that this has already been tried and repealed in other developed countries, to me, is a very, very clear sign that if we tried in the U.S., we’d have a very similar outcome.

“And so it strikes me as either an optimistic or unrealistic way to try and pay for various social proposals,” Yang continued, “because they’re assuming that it’s going to work here on a level that it has not worked anywhere else, whereas a value-added tax has worked in every other developed country for years.”

In a September interview on The Sentinel’s politics podcast, Pod Free or Die, Warren said her wealth tax differs from the European models in its lack of exemptions.

Back over at the brewery, Dodson said Yang’s more condensed version of that answer finally convinced her to back him in the primary, where she was also considering South Bend, Ind., Mayor Pete Buttigieg and U.S. Sen. Amy Klobuchar of Minnesota.

“I felt less willing to vote for other candidates after unpacking their policies more, and I feel more likely to vote for [Yang] after I dig into his policies,” Dodson said. “... I mean to me, it seems crazy that you wouldn’t look at countries that have already tried [a value-added tax].”

To the “trimming the fat” portion of Dodson’s question, Yang pointed to military spending as the main area he would target.

At The Sentinel editorial board session, Yang cautioned that he would not want to “take away” anything from Americans, and compared the multi-trillion-dollar deficit to a business problem, where cutting one’s way to profitability can go only so far.

But as for two of the nation’s chief executive’s heaviest functions — asking Congress for permission to send armed-service members to war and having the authority to launch nuclear weapons — Yang said he has some safety-related tweaks in mind.

On nuclear weapons, Yang said his plan is to establish a multi-tiered sign-off system so the commander-in-chief would not be the only person with authority to launch such devastating carnage. The vice president and White House chief of staff would also have to give the go-ahead in a potential Yang administration, the rookie campaigner said.

As for sending troops into harm’s way or using other military measures, Yang said he has a three-part criteria for the use of force: a vital national interest or the ability to avert a human catastrophe; a clear timeline for withdrawal; and a shared burden of troops and resources with allies.

As his campaign has become more sophisticated, with more staff and drawing bigger crowds, Yang broached a similar range of topics in his shorter time with voters at Branch and Blade.

For die-hard fans like Chris Reardon, a salesman from Holyoke, Mass., that intellectual curiosity is what makes the difference between being all-in for Yang and still shopping around.

Reardon, 55, said Monday was the first time he had ever met a presidential candidate, and that he has already begun volunteering for the Yang campaign.

After another one of his three-finger-snap-bursts while describing one of his favorite images — America entering “the third inning of the greatest economic transformation in the history of our country” — Yang engaged in a now-signature call-and-response teed up for supporters like Reardon.

“When is the last time you heard a politician say the words ‘fourth industrial revolution’?” Yang asked.

“Only you!” Reardon replied.

Editorial board interview with Andrew Yang

Seven Democratic presidential hopefuls will take the stage for tonight’s televised debate in Los Angeles, down from 10 at the last debate in N…