Along with Gladys Johnsen (not pictured), Keene City Councilors, from left, Bettina A. Chadbourne; Janis O. Manwaring; Catherine I. “Catt” Workman; and Kate M. Bosley, shown here in an interview with The Sentinel at the Hannah Grimes Center for Entrepreneurship Thursday, comprise one third of the Keene City Council. 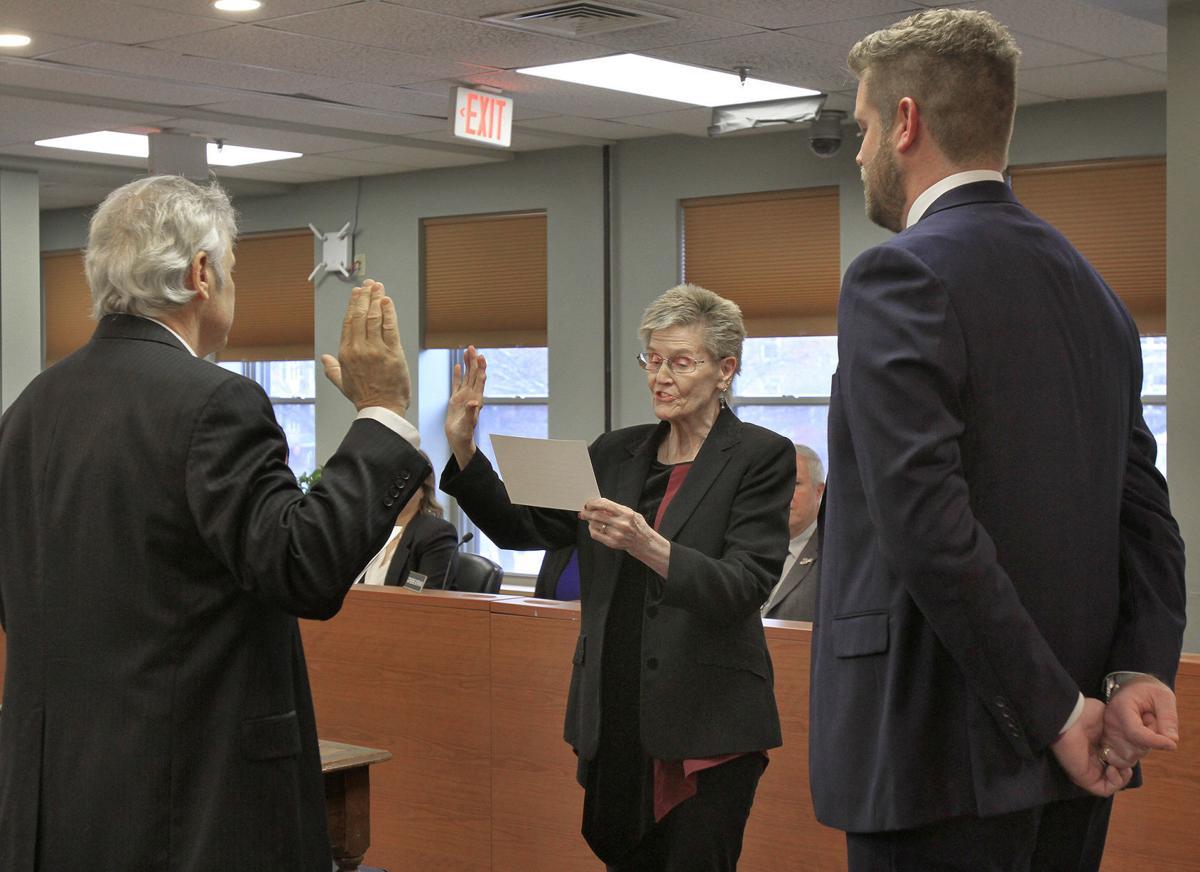 Along with Gladys Johnsen (not pictured), Keene City Councilors, from left, Bettina A. Chadbourne; Janis O. Manwaring; Catherine I. “Catt” Workman; and Kate M. Bosley, shown here in an interview with The Sentinel at the Hannah Grimes Center for Entrepreneurship Thursday, comprise one third of the Keene City Council.

In his inaugural address Wednesday afternoon, Keene Mayor George S. Hansel commended all of November’s candidates for one of the most contested elections in recent memory. He thanked the city councilors and residents for their passion and fervor.

He also pointed out another notable facet of the race: It left the City Council with its highest number of female members in many years.

Incumbents Kate M. Bosley and Bettina A. Chadbourne kept their seats, while newcomers Catherine I. “Catt” Workman and Gladys Johnsen joined the ranks. Janis O. Manwaring’s seat was not up for election, bringing the number of women to five out of the council’s 15 members. With Hansel’s committee appointments, women are also chairing two of the council’s three standing panels.

Before this election, there were three women on the council. The last time a third of Keene’s elected officials were female was in 2009, according to city records, and there haven’t been more than five on the council since the mid-1990s.

While this is a significant moment, Hansel said, the council isn’t yet a close reflection of the community.

“As our city grows and becomes more diverse, we need to work extra hard to invite representatives of that diversity to the table,” he said.

In a group interview Thursday evening, four of the female councilors discussed the reasons why such representation matters to the community. Johnsen, who served eight years in the N.H. House, was unable to attend the interview.

Manwaring, 72, is beginning her 11th year as a Ward 1 councilor. Over time, she’s become a strong advocate for her ward as well as a voice for senior citizens across Keene, who she said will soon make up nearly a third of the area’s population.

Bosley, 41, said she stressed to the public and the council when she was running that her demographic wasn’t being represented, and as a mother of young children who owns a business, she felt she was uniquely positioned to join the council. Bosley was chosen by councilors to fill a vacancy in August and was elected to an at-large seat in November.

As a single, young professional, Workman, 36, said she’s learning how to juggle her career with her elected office. She expanded on that in a brief follow-up and said she hopes to remind people through her service that success isn’t measured by whether a woman has a partner or children. Workman was elected to a two-year term as Ward 4 councilor.

Just re-elected as an at-large councilor, Chadbourne, 60, began as a minute-taker with the city, listening to council meetings while also hearing concerns from her neighbors. When she was elected to serve Ward 2 in 2012, she said her goal was always to be a voice at the table for her constituents, not necessarily focusing on a particular demographic. Chadbourne became an at-large councilor in 2016, representing all Keene residents.

While noting the council could benefit from more racial diversity, Workman said the range of age, socioeconomic status and background among the five women is astounding.

“When I read all our bios, I was like, ‘I am proud to be serving with these women,’ ” Workman said.

Manwaring said she was excited to see a younger generation stepping up to the plate.

And Chadbourne pointed out that the wave was part of a nationwide trend of more women entering politics.

Across the country, the 2018 midterm elections resulted in record-breaking numbers of women filing for office, winning primaries and, in the case of the U.S. House and Senate, serving. That November brought other historic milestones, too, such as the election of the first Muslim and Native American women to Congress.

The 2020 presidential race also kicked off with six female candidates, marking the first time more than two women competed in the same major party’s primary process, according to the Center for American Women and Politics.

In Keene, both Chadbourne and Manwaring said this surge led to more women throwing their hats in the ring, as in other places. The council’s relative lack of female representation hasn’t been because women were being defeated at the polls, they said, but because fewer of them ran in past years.

Bosley suggested that discussions like this, coupled with political shifts across the country, might help move the needle.

“Us sitting here today saying that it’s possible, that you will be welcomed and embraced, might encourage one person [to run],” she said.

Bosley said she was initially concerned that being a woman might hinder her chances of being elected, but she realized quickly that councilors and constituents alike embraced her for the population she represented.

“... In the community, I think you saw it reflected in the vote counts that our women were the top vote-getters,” she said, referring to herself and Chadbourne, who came in first and second place, respectively, in the at-large race. “It’s kind of amazing that the city said, ‘We want strong women to stand up and represent us.’ ”

Having more women in public office can also be beneficial to voters, the councilors said.

Women can be perceived as more approachable, Workman offered, and some people might feel more at ease speaking with one of them about a sensitive concern.

Bosley said she, too, feels more comfortable surrounded by her peers. Seeking advice and input from someone with a shared experience, Chadbourne was the first councilor Bosley contacted before her campaign. Now that the group of women has grown, she said, it’s likely to encourage more to run in future elections.

Chadbourne said that arrangement had its advantages and allowed a woman’s voice to be present on each committee, which is where the councilors conduct the bulk of their work.

The setup also bucked any potential perception that a particular committee could be seen as “too difficult” for a woman, Manwaring added.

Keene’s mayor appoints committee membership, and under Hansel, the committees have been shuffled around: Chadbourne moved from finance to municipal services, where Manwaring maintained her role as chairwoman. Bosley was named chairwoman of the planning committee, with Johnsen and Workman at her side.

Though this leaves the finance committee without a female presence, Bosley said having two chairwomen is exciting. The majority of the planning committee will be women, which will be a new dynamic for the elected officials.

Not yet a new normal

Workman said it’s vital that all demographics, including women, are represented strongly in local government to show “that it is possible, it’s doable. Whatever barriers someone thinks that they may face, you can overcome them.”

The council can seem intimidating, Bosley said, but increasing diversity provides residents more access to local government when they see their peers in leadership positions. It’s a cycle, she explained, that invites more people to participate once they realize “we’re not really intimidating, we’re just your neighbors.”

The women recalled Wednesday’s inauguration, when Bosley’s 7-year-old daughter, Lilah Henderson, hopped up in her mother’s council seat. Bosley asked if her daughter planned to join the council someday, and Lilah answered, “No, I’m gonna run for mayor.”

Workman said that’s a perfect example of the vital importance of representation, and Bosley agreed that she’s prioritized sharing this experience with her children. From the clerk’s office when she filed her declaration of candidacy to the polls on voting day, Bosley brought her kids along throughout the process. She’s also tried to teach the value of giving back to their community, even when it might be easier to stay home and skip a council meeting.

There was a consensus throughout the interview that, on one hand, electing more women should be celebrated. But the councilors also lamented that the fact needs to be pointed out, which runs counter to the idea of normalizing their service.

“Rather than it being an anomaly that we have to write an article about,” Bosley said, “I would like it just to be, ‘Oh, well of course, women are on council and doing all sorts of other wonderful things.’ ”

Manwaring added: “After all, they generally don’t say that about the men.”