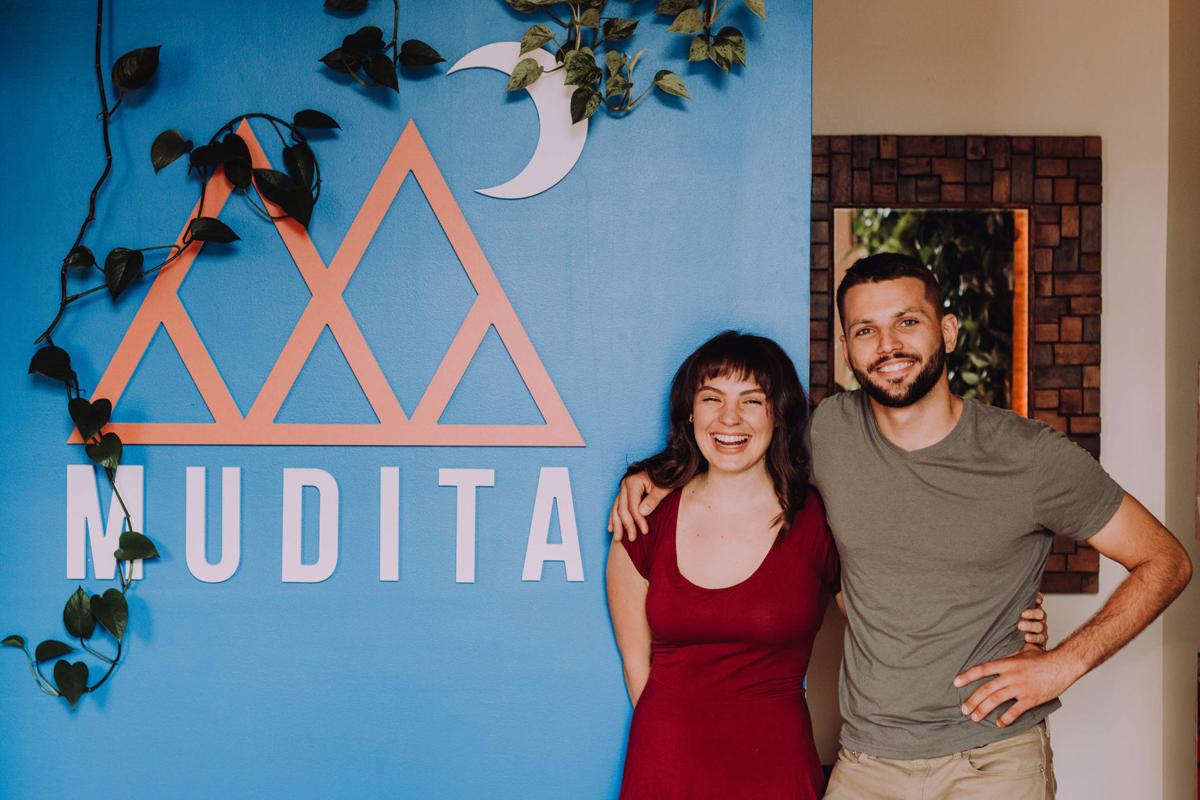 Kat Wood and Aaron Shields named their business, Mudita Massage and Wellness, in Keene for the Buddhist

concept of finding joy in the happiness and success of others. Below, Wood and Shields at work. 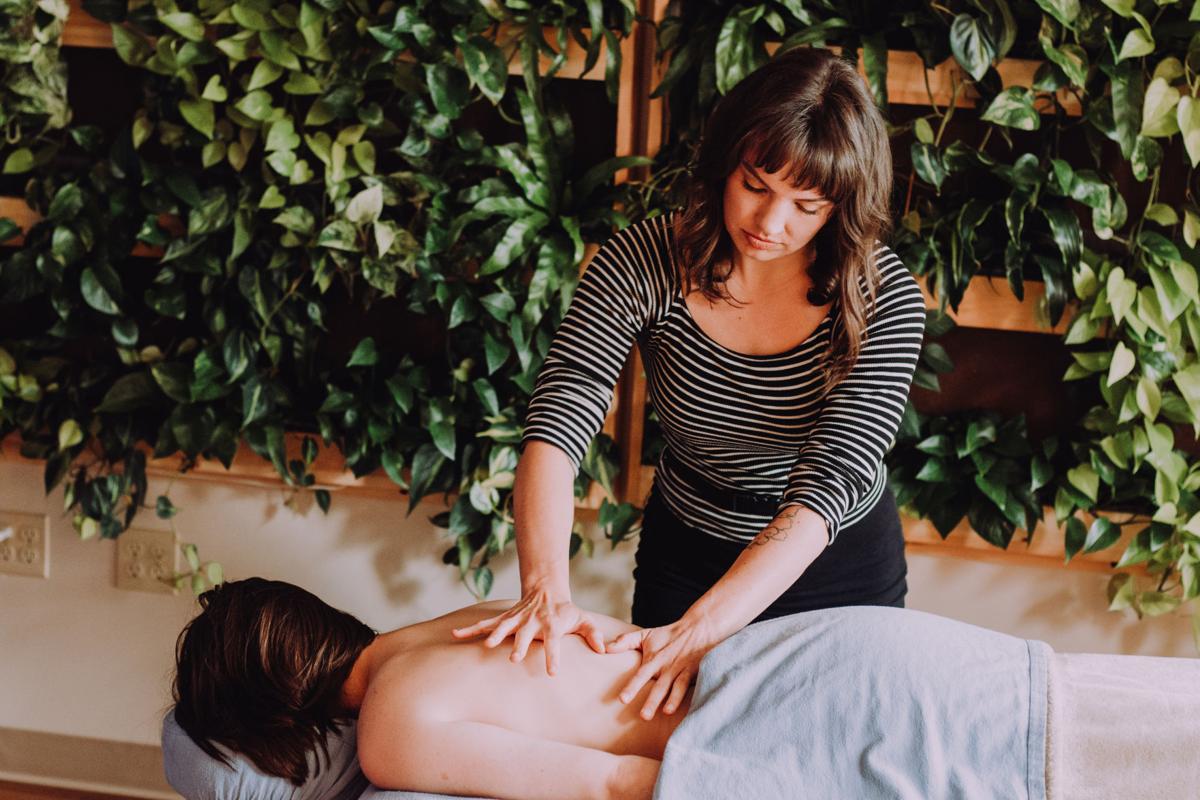 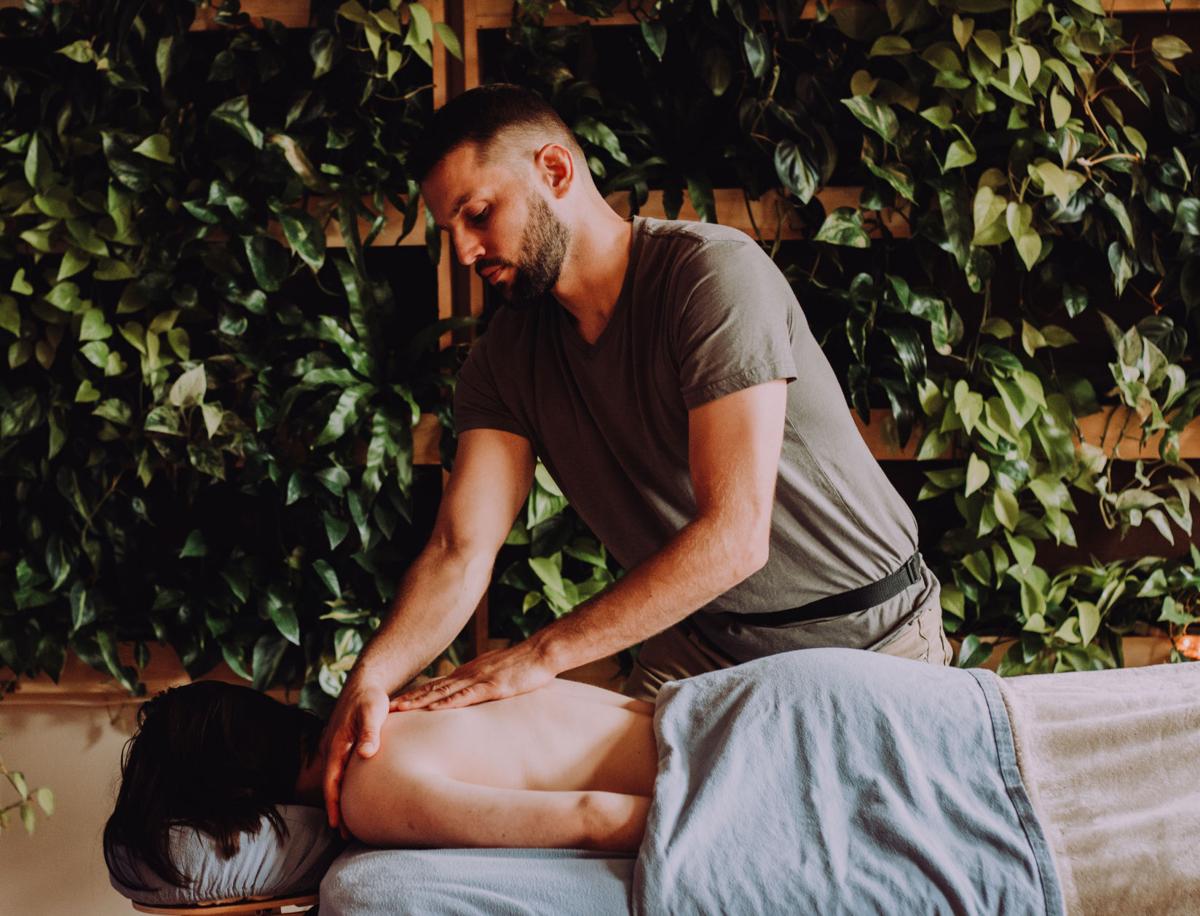 Kat Wood and Aaron Shields named their business, Mudita Massage and Wellness, in Keene for the Buddhist

concept of finding joy in the happiness and success of others. Below, Wood and Shields at work.

It’s early morning on what will become a hot and humid summer day, and Kat Wood takes a seat across from Aaron Shields in the cooled-air yoga studio at Mudita Massage and Wellness, their shared business on Emerald Street in Keene.

He hands her a small container of blueberries — their breakfast — and she smiles at him. The two had just ridden their bicycles from their home in town to their studio, which they started together in October 2018, and named for the Buddhist concept of finding joy in the happiness and success of others.

“I love helping people be healthy in their bodies,” Wood says as she effortlessly rearranges herself into what is a well-practiced half-lotus position in her chair, having done yoga since she was a teen. “Your health and well-being easily translate into everything you do in your daily life.”

Shields backs her up. “It’s so satisfying to make other people feel good.”

The two are both business and life partners, and say they represent a new generation of young entrepreneurs in the Keene area. And, they’ll be getting married next month in a ceremony on the old stone-arch bridge off Route 101 in Keene. It’s obvious they’re very comfortable with one another — they even sometimes finish each other’s sentences.

“Starting a business is easy. Growing a business is the hard part,” says the 35-year-old Shields, who grew up in Gettysburg, Pa., and arrived in Keene eight years ago as a salesman for Tender Corp., a Littleton-based manufacturer of recreation products. As of this summer, the company is now known as Adventure Ready Brands. He left that job when he started Mudita with Wood.

The two met in 2016 through mutual friends and discovered they had shared interests in massage therapy and strenuous outdoor activities, such as rock-climbing, long-distance running, hiking and canoeing. For their honeymoon, they plan to bicycle from Keene to Acadia National Park in Bar Harbor, Maine, a distance of 330 miles. Last month, they completed a three-day canoe trip down the Battenkill River in Vermont and New York, along with their two dogs, Kima and Bodie, named for characters in a TV show they binge-watch, “The Wire.”

“I’ve always been interested in massage and in yoga,” says Wood, 29.

The story of the pair — their relationship and their business — is one that features a good deal of serendipity.

Wood was born and raised in Norwood, Mass., and came to Keene when she was 18, following her father, James Wood. It was through him that she became interested in yoga, as he had first begun practicing it in 2001, and continues to do so, serving as an instructor in meditation and stretching at Mudita. The elder Wood was a student of Robert Moses of Dublin, an internationally-known yoga expert who guides annual pilgrimages to sacred sites in India and is also the co-publisher of the magazine Namarupa: Categories of Indian Thought.

Kat Wood says that when she first came to town, she never intended on staying, or attending college, but that’s what she did, enrolling in Keene State and earning a bachelor’s degree in geography and environmental studies in 2015. During this time, too, she became a yoga instructor.

No stranger to hard work, during college and after graduation, she also took on a series of odd jobs, including as a pet-sitter, house-cleaner and doing data entry. She also worked more steady jobs at the Monadnock Food Co-op, The Bread Shed and Pier 1 Imports, along with serving as an outdoor instructor at Kroka Expeditions in Marlow, which offers wilderness adventures for children and teens.

“What all these jobs did for me is plunge me into the community,” she says. “It helped me build this most awesome network of people here. It showed me that every interaction around here leads to something else. If you’re honest and respectful to people, or just friendly, you build relationships.”

After the pair began dating, they started their search for new jobs. Shields had grown weary of his sales job and planned on becoming a nurse, and Wood wanted to learn more about anatomy and massage, to complement her training as a yoga instructor.

Shields decided against nursing school, and he and Wood enrolled together at River Valley Community College, where both earned Certified Massage Therapist degrees in 2017.

The duo then decided to start their own studio, settling on a space for rent at the building on Emerald Street that is also home to Shipping Shack and Fire Dog Breads, as well as the Salt & Lime food trailer.

Wood says that Mudita, along with the other new firms on Emerald Street, is part of what the pair sees as the renaissance in entrepreneurial activity in town.

Their studio has a clientele of about 300 people, in a relatively crowded field locally for both yoga and massage services.

“It’s really a great community of bodyworkers,” Wood said in a Q&A interview in the March 2019 edition of The Sentinel’s Business Journal. “Very supportive and not competitive, for the most part. We meet regularly as a group, which is awesome, to sit with other people and talk about what you do when this happens, or someone might say I have this client and I don’t really feel like I am helping them, maybe your style would be better suited … Every therapist has their own style and every person has their own needs and preferences. There’s room for all of us.”

Wood also says that physicians are increasingly recommending their patients undergo massages for therapeutic reasons, and that medical insurance companies are starting to pay for such services. Yoga, too, she adds, can address any number of physical and mental issues, with its emphasis on proper breathing, posture, muscle control and in many cases, meditation.

According to a 2016 survey conducted by Yoga Journal and Yoga Alliance, the number of Americans practicing yoga has increased to more than 36 million, up from 20 million in 2012, with 28 percent of all Americans having participated in a yoga class at some point in their lives. And according to the National Holistic Institute, Americans visit massage therapists 230 million times a year, provided by about 325,000 practitioners.

Unfortunately, Mudita, like almost all business involving close physical contact with clients and customers, had to close for COVID-19 on March 18. It reopened June 15. The pair used the time to pursue their active lifestyle, with Wood running solo in a personalized 50k (31-mile) course May 30 when an organized event was canceled, and Shields honing his skills in Jiu-Jitsu. He is an instructor in that martial art at Flow Brazilian Jiu-Jitsu in Swanzey.

The two admit that although their jobs are rewarding, the practice of massage is no easy task, and can be exhausting.

“It’s physically hard and taxing,” Shields says. “You have to take care of yourself.”

At a glance: Kat Wood and Aaron Shields

At a glance: Kat Wood