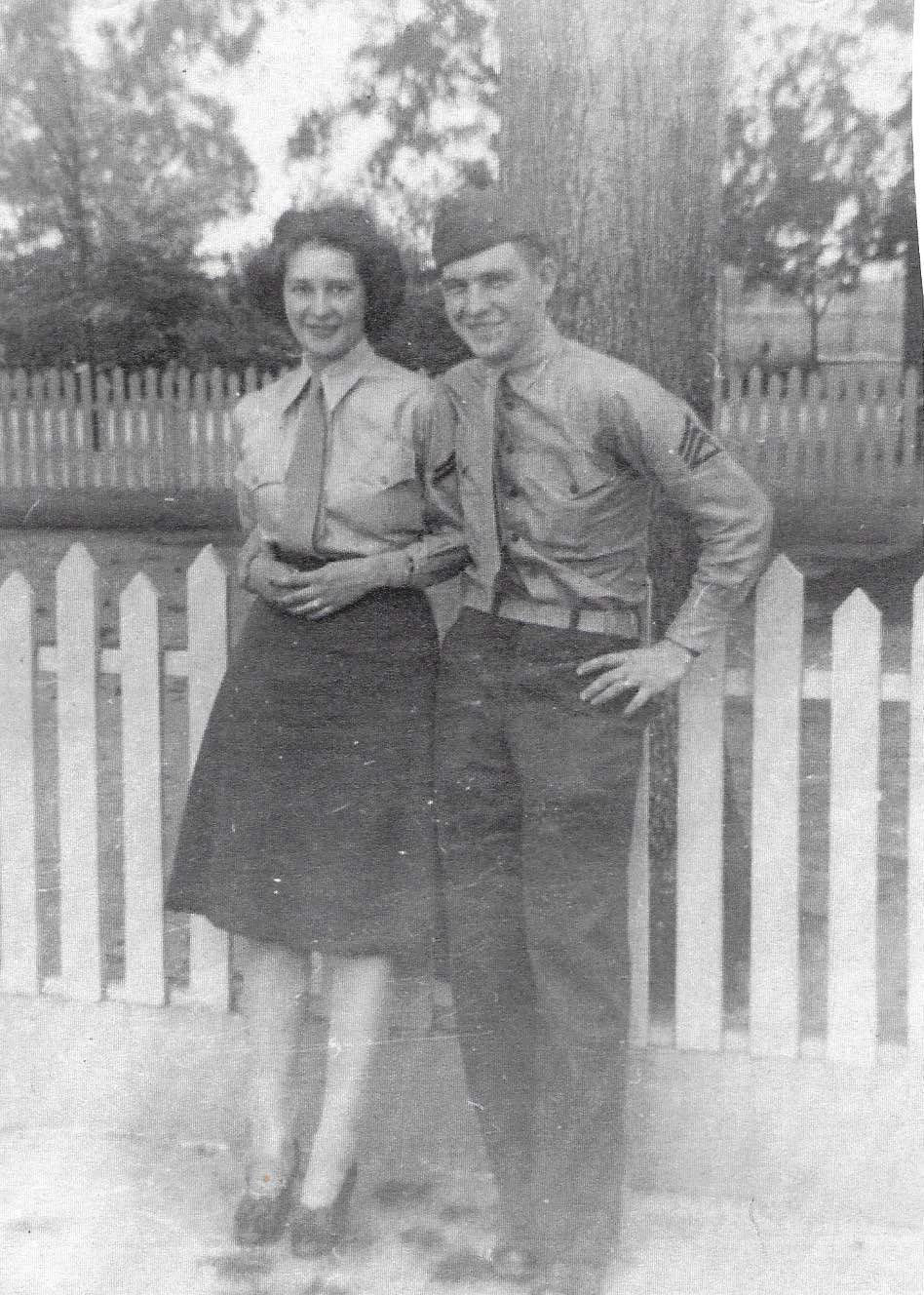 Jane and Bill Allen at their Marine wedding on April 20, 1944, at Protestant Chapel at Cherry Point, N.C. According to their daughter-in-law Linda Brenneman, they had a 72-hour honeymoon in Raleigh. 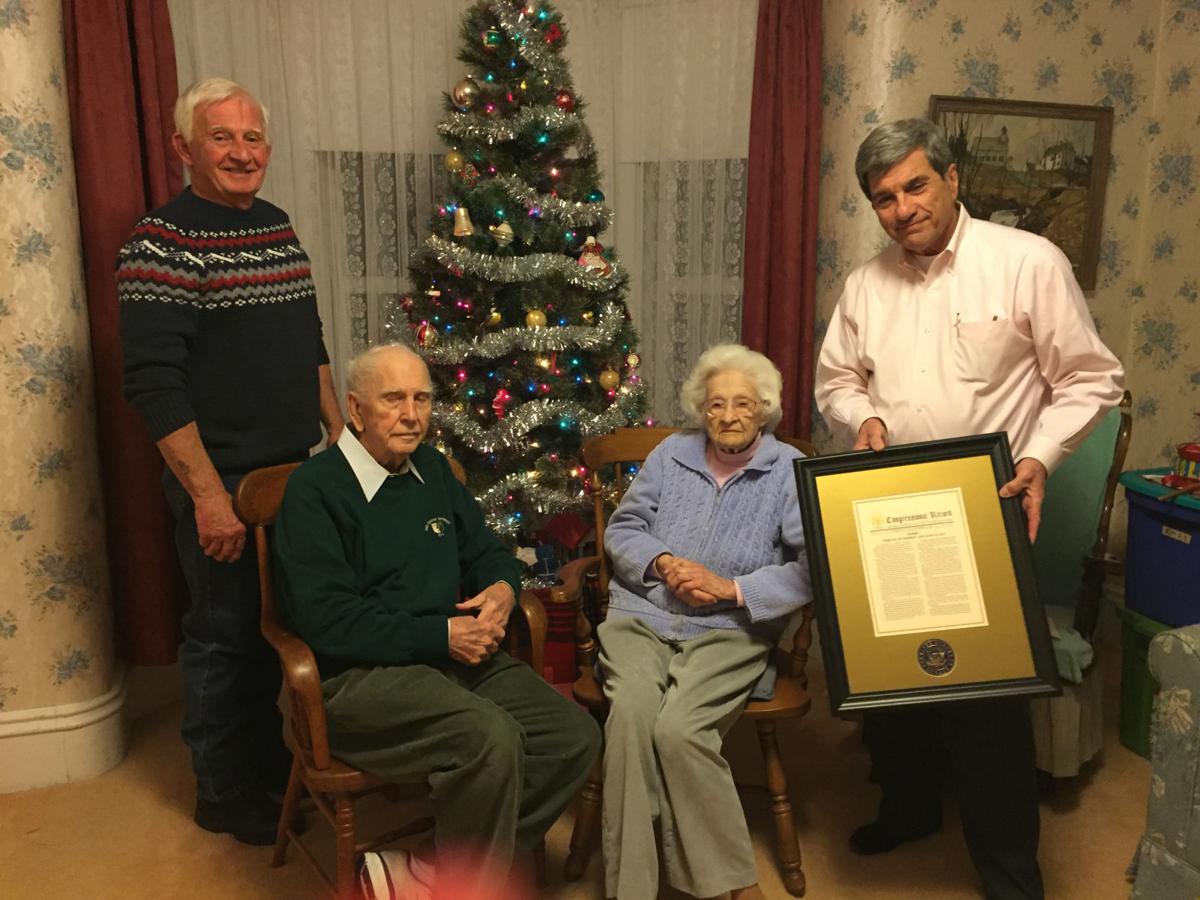 Tom Allen, far left, and family friend Michael Bentley, far right, present Bill and Jane Allen with a framed certificate of their Congressional Record resolution in their home in Spofford on Jan. 13.

Jane and Bill Allen at their Marine wedding on April 20, 1944, at Protestant Chapel at Cherry Point, N.C. According to their daughter-in-law Linda Brenneman, they had a 72-hour honeymoon in Raleigh.

Tom Allen, far left, and family friend Michael Bentley, far right, present Bill and Jane Allen with a framed certificate of their Congressional Record resolution in their home in Spofford on Jan. 13.

Not long ago, Warren “Bill” and Jane Allen of Spofford, both 97, got the surprise of their lives. They learned that Sen. Jeanne Shaheen had honored them before the U.S. Senate in mid-December. She lavished praise upon the couple, who are World War II U.S. Marine Corps veterans, for their military service, their love story and their subsequent lifelong community leadership.

Her statement, quoted exactly as originally spoken, now remains a permanent part of the prestigious Congressional Record, the official printed account of the proceedings of the U.S. Senate and House of Representatives.

“When Americans today talk about the ‘Greatest Generation’, remarkable individuals like Jane and Bill Allen are exactly who they have in mind,” Shaheen, D-N.H., said in a news release. “It is a great honor to be able to celebrate these Granite Staters’ incredible story of love, service to our nation and innumerable contributions to their community and state. It is critical that heroes like Jane and Bill receive the recognition they deserve, and I wish them all the best in the years ahead.”

The Allens knew nothing about the honor until their son, Tom, recently shared the news with them, and gave them a framed certificate of the Congressional Record resolution in January.

Brenneman, a retired educator, has been married to Tom Allen for 20 years. They live in Acworth.

At the start of World War II, Bill and Jane, like many of their peers, quickly heeded the call to serve their country. Both joined the Marines. Bill, who originally hailed from Georgia, enlisted in 1942. About a year later, Jane, a Spofford native, joined the newly formed U.S. Marine Corps Women’s Reserves. Both trained as air traffic controllers, but at different locations in the country. Eventually, the two wound up stationed at the Marine Corps Air Station Cherry Point in Havelock, N.C.

There Bill excelled at directing aircraft traffic, and soon became a supervisor. Jane worked in the station’s clearance center, keeping track of all arriving and departing aircraft. By chance, in late 1943, they finally met on the job following a nerve-wracking air-traffic event. Instantly attracted, they started dating and married five months later in April 1944.

Soon after, they relocated to Spofford, and bought a house. In ensuing years, they raised two sons and a daughter there. Tom Allen is the oldest. Walter Allen lives in Massachusetts and Katy Vincent lives in Westchester County, N.Y. Now married 76 years, Bill and Jane’s family also includes six adult grandchildren, in New Hampshire, Massachusetts and Connecticut. The couple, who will both celebrate their 98th birthdays within a few months, live independently with support from Tom and his wife, as well as Vincent and other family members and friends.

Once settled in New Hampshire, the couple didn’t like to travel but preferred to stay home, although they drove to Georgia and Tennessee to visit friends, and visited Ireland and England.

“Jane grew up in Spofford. When they came back, she moved across the street,” Brenneman said. “All her life, Jane has lived on that little spot on earth.”

In Spofford, the Allens thrived and led an idyllic life. Initially, they owned the local general store, and then Bill launched a career in banking. In 1993, he retired as president of the Savings Bank of Walpole. Jane earned a degree in home economics at Keene State College, and they also plunged headlong into community service.

Bill served as assistant town moderator, and on the town budget committee for many years. He also was a captain in the volunteer fire department, and helped with the Boy Scouts. Meanwhile, Jane was instrumental in founding the Chesterfield Historical Society, and in raising funds for a new library. Besides that, the pair were passionate supporters of the Keene State College basketball teams (both men’s and women’s) for decades. Bill was the official scorekeeper. After 35 years, he was honored for his role with a special presentation.

“Tom has the Norman Rockwell childhood story,” Brenneman said. “He had wonderful parents, and a fun, fun childhood”.

Tom, who recently retired as general manager of Kasi Infrared of Newport, which provides infrared systems for trucks, agrees. And he wanted everyone to know.

“I just know what wonderful people they’ve been,” he said. “They are the greatest generation. I wanted them honored. They were wonderful parents.”

To that end, in late October, he emailed Shaheen’s office, requesting help to meet his goal.

“I didn’t expect anything in return,” he said.

Within a week, he was surprised. Shaheen’s staff responded with a phone call. Following their guidance, Tom and Brenneman interviewed Bill and Jane, wrote narratives and extensively researched military documents, which they sent to Bethany Yurek, special assistant for constituent services in Shaheen’s office, to be vetted.

The process took a couple of months, and entailed many hours of work, and frequent communication between them and Yurek, Brenneman said.

In time, after all had been checked for accuracy, Tom, who is a Vietnam veteran, requested and received a letter signed by Shaheen. She honored the couple with a statement made to the Congressional Record and presented to President Donald Trump on the Senate floor in December.

He had the certificate of resolution framed, and presented it to his parents just weeks ago.

“There are only two awards higher than this,” he said.

“It was wonderful for Jeanne Shaheen and her office to actually do this,” he said. “Right before and after the November election, they found time to actually do it. It just all seemed to come together.”