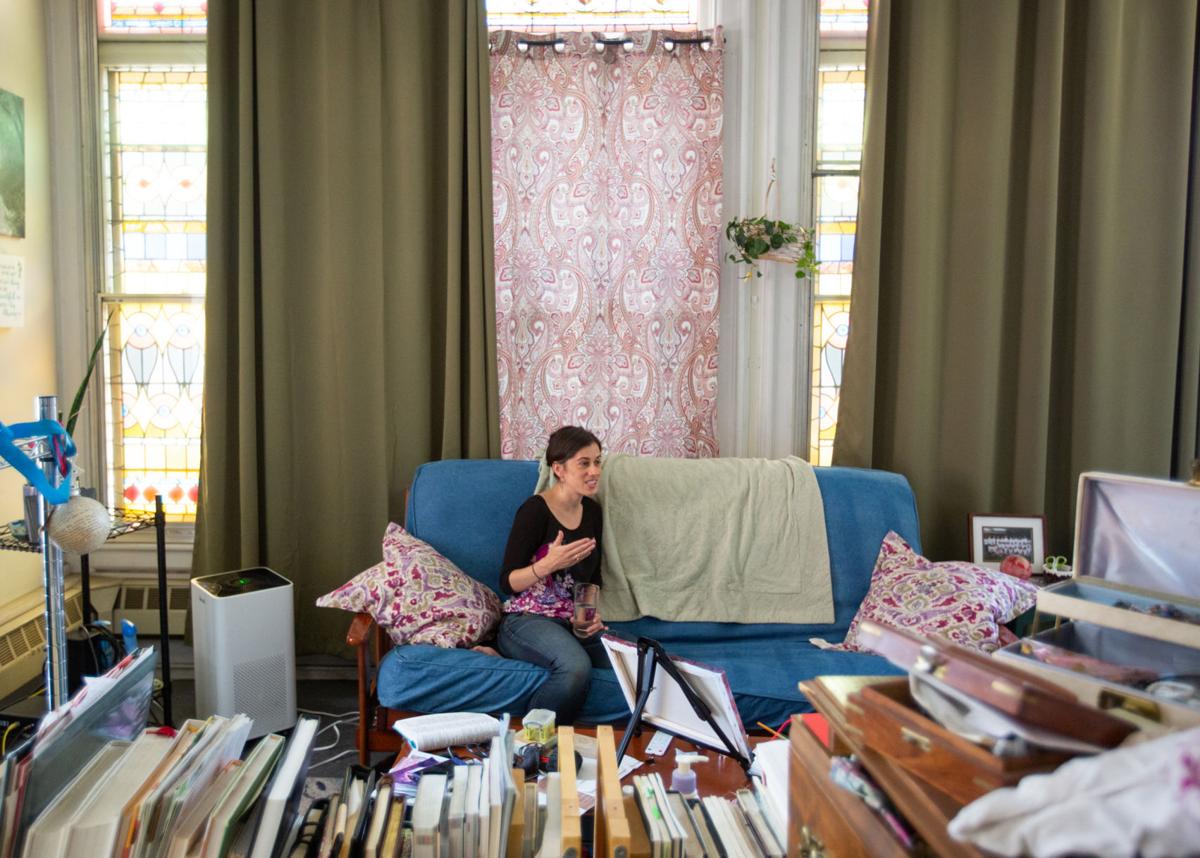 Laura Tobin is pictured Wednesday at her Central Square apartment in Keene. Tobin has lived in the apartment since 2016 and learned recently that her rent will go up by $400 next month. 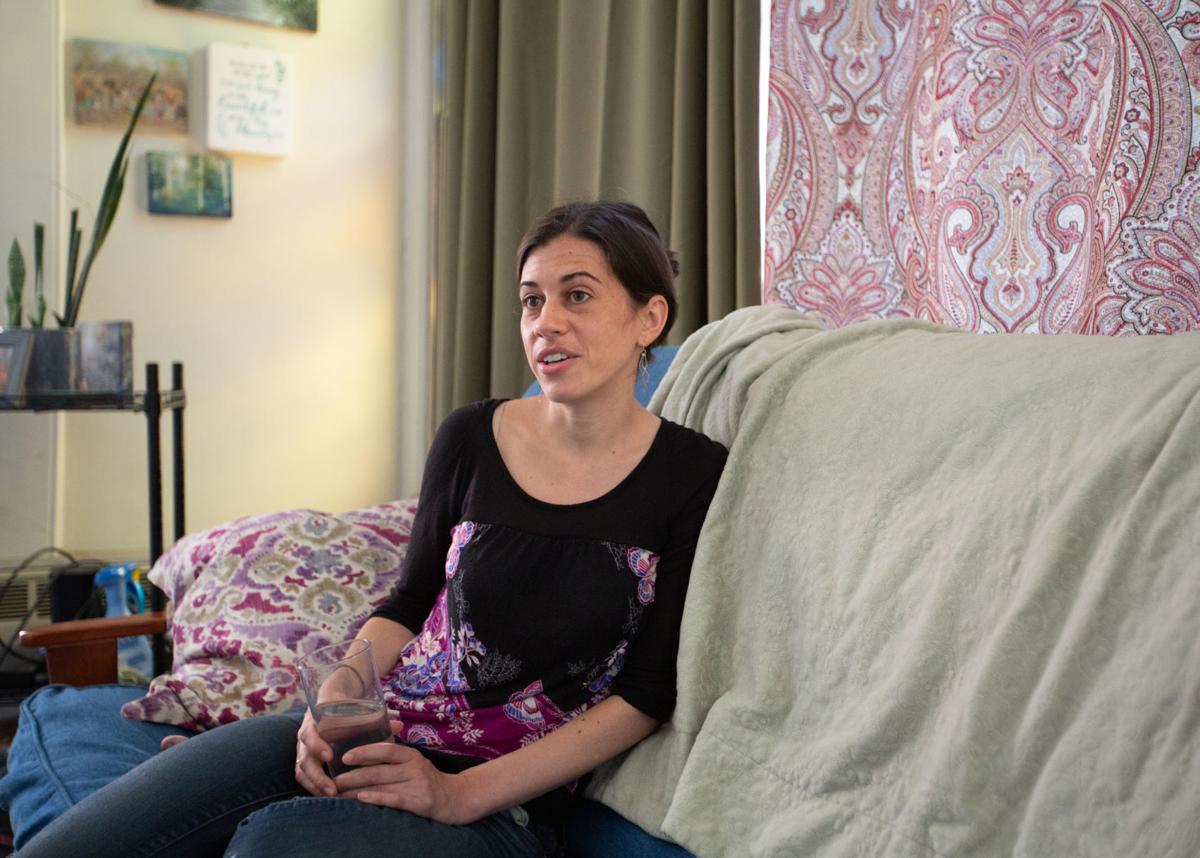 “Basically, I’m trying to figure out if I can stay and if I can leave. Because at this point, I can’t do either,” said Laura Tobin, shown here in her apartment on Keene’s Central Square on Wednesday, after learning recently her rent will go up by $400 next month.

Laura Tobin is pictured Wednesday at her Central Square apartment in Keene. Tobin has lived in the apartment since 2016 and learned recently that her rent will go up by $400 next month.

“Basically, I’m trying to figure out if I can stay and if I can leave. Because at this point, I can’t do either,” said Laura Tobin, shown here in her apartment on Keene’s Central Square on Wednesday, after learning recently her rent will go up by $400 next month.

The notice Laura Tobin found on her door July 2 was categorical: Her monthly rent will rise from $800 to $1,200 next month if she wants to stay in her second-floor apartment on Keene’s Central Square.

For Tobin, 38, who has lived in the building since 2016, the rent hike comes at a particularly bad time: The marketing work she’s done for several years as an independent contractor has dried up recently, leaving her largely reliant on another part-time job at Toadstool Bookshop in downtown Keene. Without public assistance, she likely won’t be able to stay in her apartment, where she lives by herself.

The notice asked Tobin to tell 1-3 Central Square’s owner — the Salem-based real estate firm Commonwealth Collective — by July 5 whether she planned to sign a new lease at the higher rate. As of Wednesday, though, she still hadn’t responded.

“It’s embarrassing to say I don’t make enough money to afford an apartment,” she said.

Many tenants at the Central Square apartment block — which has 25 rental units, mostly studios, and Rock, Paper, Scissors hair salon — expected their rent to go up after the Commonwealth Collective bought the building for $1.8 million in April, according to Tobin.

The company, which owns several apartment buildings in Manchester and also has residential properties in Maine, is rehabilitating 1-3 Central Square, including installing a keyless entry system, repainting the halls and putting new appliances in some units. Commonwealth Collective co-owner Michael Ketchen told The Sentinel in May, however, that it didn’t plan to replace any residents or the first-floor salon.

“We’re trying to maintain the tenant base in the building,” he said at the time. “We like the people.”

Ketchen confirmed Tuesday that his company is hiking rent for the Central Square apartments, saying the increases are meant to bring those units — featuring large stained-glass windows and views of downtown Keene — to their proper market value. Studios in the area typically go for at least $1,000 per month, he said, explaining that the building’s previous owner, Dorrie Masten, had been charging much less than that.

“The problem is the existing rent for some of them was far under market value,” he said. “[The increase] sounds like a lot, but it’s really only a lot if you were the guys at $700.”

The lack of affordable housing in New Hampshire and locally has become a top concern for many advocates and public officials. The median rent, including utilities, for a two-bedroom apartment in Cheshire County has risen by more than 5 percent, to $1,100, over the past five years, according to a new report from the independent state agency N.H. Housing. The county’s vacancy rate has dropped from 4.5 percent, which experts say is healthy, to 1.7 percent in that time, the data show.

The ongoing rehabilitation work at 1-3 Central Square also contributes to the rent increase, according to Ketchen, who said eight people left the building soon after the Commonwealth Collective bought it. Filling the vacant units, he said, has shown the demand for that real estate — even at a substantially higher rate than before.

“I have a waiting list,” he said. “I physically can’t get people into these apartments fast enough.”

Ketchen said his company plans to raise rent for all 1-3 Central Square tenants as their respective leases expire, though he didn’t know Tuesday how many will be affected at the end of this month, when a national eviction moratorium is set to expire. The firm also doesn’t know whether residents will leave instead of paying the higher rent, he said, adding that people might stay after realizing they’d had the units for well below market rate.

Tobin isn’t sure that’s an option, however.

An Elm City resident since graduating from Keene State College in 2006, she worked at a local bank before “stumbling into” part-time marketing work, which has included brand promotion and web design, several years ago. That, combined with her job at Toadstool, where she makes a $10 hourly wage while working about 20 hours a week, has typically covered her bills, Tobin said.

But with the lack of marketing opportunities recently, that arrangement could be in jeopardy.

“It doesn’t pay what you would need to afford an apartment,” she said of her work at the bookstore.

Tobin, who said the Commonwealth Collective has told tenants that it would wait for late rent payments “as long as there was a plan in place,” contacted Southwestern Community Services after getting the rent notice earlier this month. The organization, which offers social services to area residents, encouraged her to apply for financial aid from Keene’s welfare office and from a $200 million rent relief program that New Hampshire is running with federal funds.

City staff were “compassionate” about her situation, she said, and offered a monthly loan of up to $650 that Tobin said requires a lengthy application. She hadn’t filled it out as of Wednesday.

She did apply to the state’s rent relief program but noted that those requests — nearly all of which are approved — often take weeks to fulfill and that the program will expire before her new lease would. Even if she gets that aid, though, Tobin argued that it would essentially help fund the renovations on her apartment that would “ultimately force [her] to leave.”

Her options are further limited because she has epilepsy, which keeps her from driving a car, meaning she needs to live within walking distance of downtown.

“I don’t have a plan,” she admitted. “Basically, I’m trying to figure out if I can stay and if I can leave. Because at this point, I can’t do either.”

Ketchen acknowledged Tuesday that raising rent could force some tenants to leave the building, saying that “moving’s a headache.” But he called those decisions the “unfortunate side” of the real estate industry and said the Commonwealth Collective — which also recently bought Centerfold Laundry on Vernon Street and the apartments above it from Masten — needs the extra income to avoid losing money on its Central Square property.

“No one’s going to be happy,” he said. “… It’s a tough part of the business, but at the end of the day it is business. You have to do what the market dictates.”

Another tenant at 1-3 Central Square, who wished to remain anonymous, said he knows of at least three residents, including Tobin, whose rents are “going up huge” in August. Residents had been expecting a monthly increase of about $200, he said, adding that while the recent upgrades to the building have been positive, the new rates are too high.

Rock, Paper, Scissors co-owner Heather Fish said a rent hike would be “detrimental” for the salon, which has been at its Central Square location for more than six years. She hasn’t been told that the rate will go up but said the business may look for a new space if it does.

“I imagine if it’s happening for some of the residential tenants, it’ll happen for us as well,” she said.

Several of Tobin’s friends have offered to host her if she can’t afford her new rent, she said, but she worries about being forced to eventually leave Keene.

Between applying for rental aid, looking for backup housing options and tracking down her epilepsy medication, which she said often doesn’t make it from the distributor to the pharmacy, she’s not sure when she can pick up another job to supplement her income from the bookstore. Other tenants likely face the same problem, she said.

“I’ve become pretty good at advocating for myself, but it’s a full-time job. What about everybody else?”