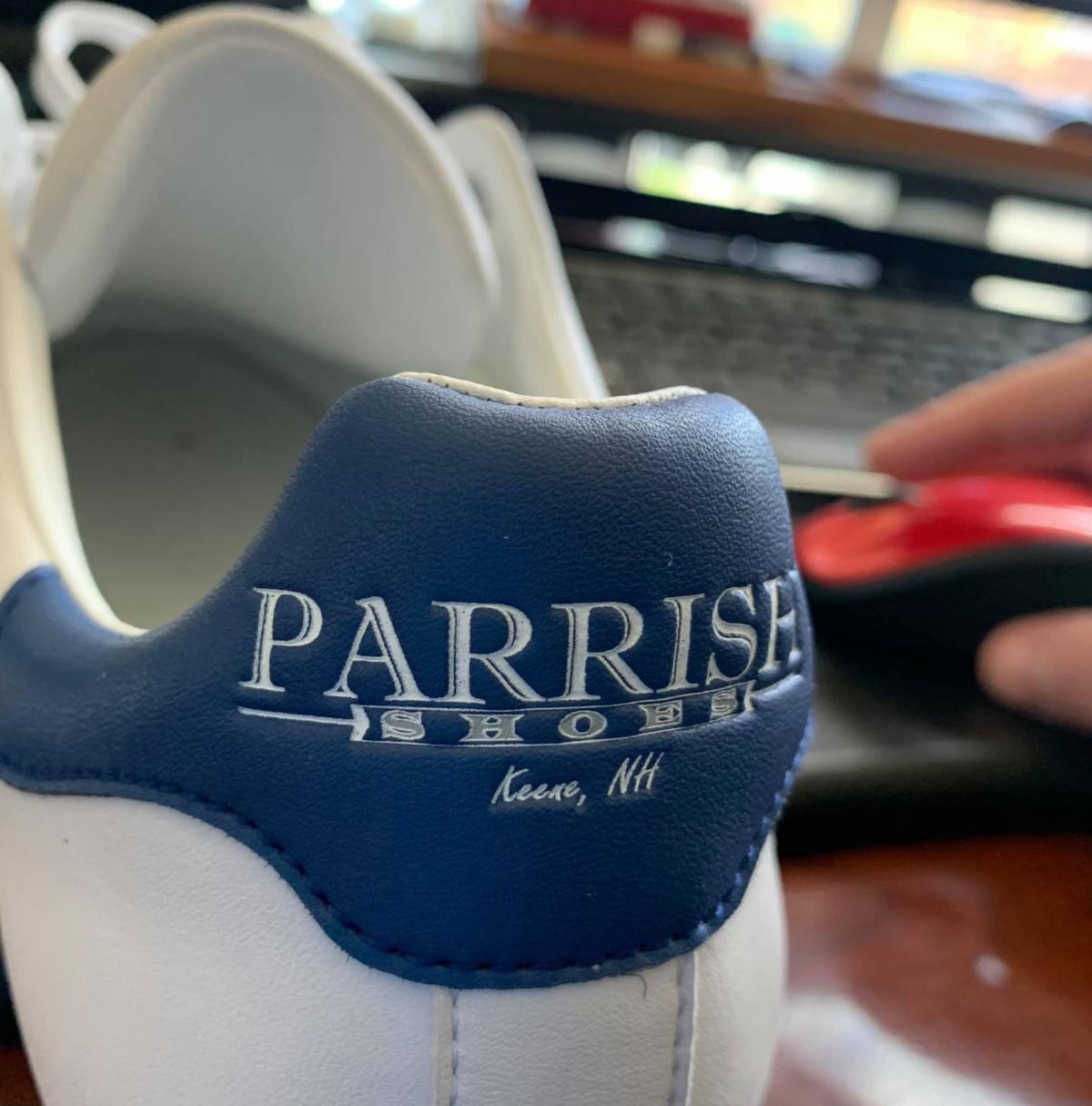 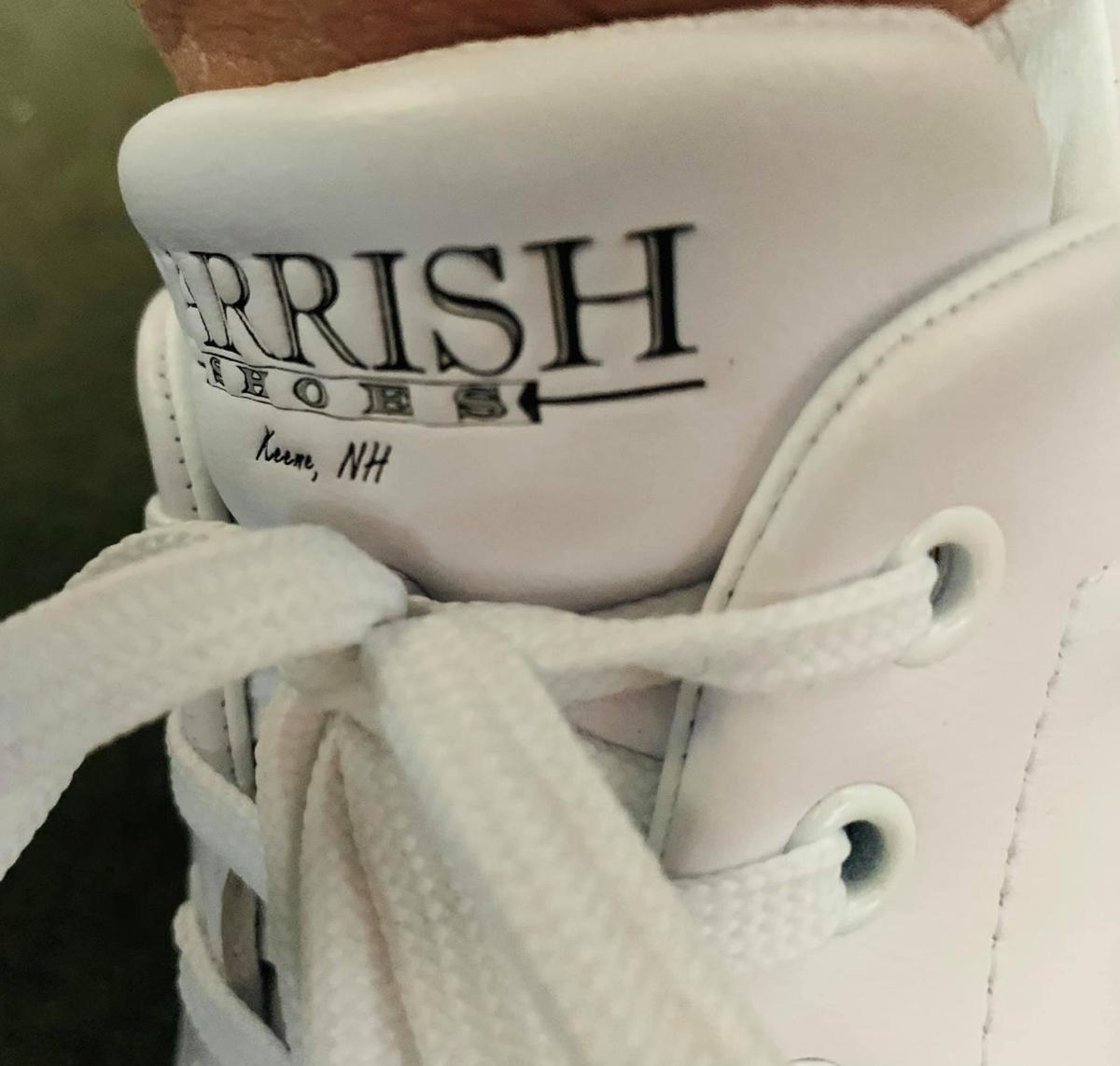 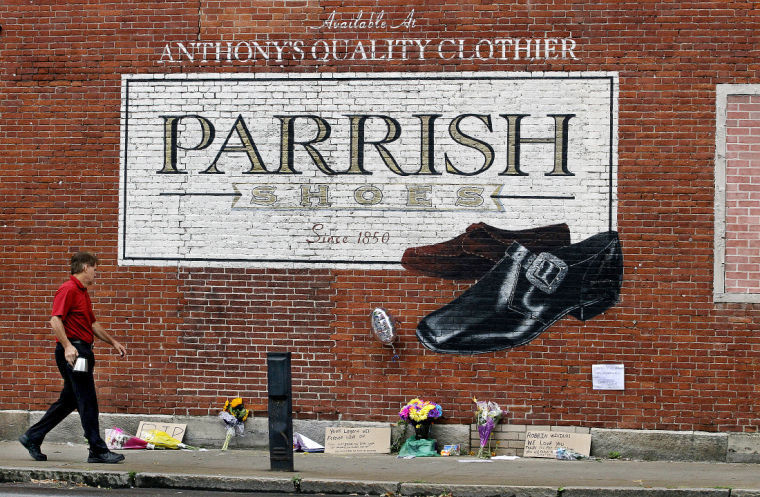 With coffee in hand, Tom Raffelt passes a makeshift memorial to the late actor Robin Williams under the Parrish Shoes sign in Keene, in this file photo from August 2014. The sign is a remnant from the filming of “Jumanji,” which brought Williams to town in 1994.

With coffee in hand, Tom Raffelt passes a makeshift memorial to the late actor Robin Williams under the Parrish Shoes sign in Keene, in this file photo from August 2014. The sign is a remnant from the filming of “Jumanji,” which brought Williams to town in 1994.

A lifelong resident of the Monadnock Region, Ted McGreer has left deep footprints in the area — often quite literally, as the owner of Ted’s Shoe & Sport in downtown Keene.

With his latest venture, a shoe company coming out with a limited-edition series, McGreer is paying homage to the city’s history of footwear manufacturing as well as its place in cinematic lore.

Parrish Shoes — named after the fictional shoe manufacturer in the 1995 adventure film “Jumanji,” parts of which were filmed in Keene — will offer 300 pairs that he designed over the past year. While that design uses the fictional company’s logo, which is also immortalized in a mural near Central Square, McGreer said the new brand is more of a nod to past shoe producers in the city, including Princess Shoe Co.

“My goal was to really celebrate our city and our heritage,” he said. “… I think it’s really cool that we have such a rich history of shoe manufacturing here in Keene.”

These shoes, though, are being produced at a small, independent factory in China, McGreer said.

With production limited due to high manufacturing costs, each of the 300 identical pairs from Parrish Shoes will have a unique identification number, according to McGreer.He said the shoes are meant to be leisure footwear and that the design is based on popular Nike and Adidas models from the late 1970s.

“It’s not bright and screaming,” he said. “It’s pretty simplistic.”

McGreer — who has consulted for New Balance’s design team for more than a decade — said his new company differs from large corporations because the shoe design is primarily functional rather than artistic, drawing on his 32 years of working with Ted’s Shoe & Sport customers.

“Shoe designers aren’t in the trenches every day,” he said. “I’ve seen so many 3-D feet.”

One of the biggest deficiencies of modern-day shoes is a lack of support, he said. As a result, McGreer is including an orthotic footbed insert that he designed for the Keene store in his entire Parrish Shoes line.

Production of the shoes, which he said are made from a water-resistant plant-based leather, began this week. McGreer said he expects to announce an online pre-sale in mid-June and to receive the full shipment by the end of July. (He declined to say what the limited-edition shoes may cost.)

They’ll be in adult sizes only.

McGreer said he will consider launching another round of production if the Parrish Shoes line proves popular and it would be financially feasible.

As for the nod to “Jumanji,” which starred Robin Williams, McGreer said the name came to him in a “lightbulb moment.”

In a side gag within the film, 1960s Parrish Shoe employee Carl Bentley (David Alan Grier) creates a visionary new concept — a modern basketball shoe — long before Michael Jordan made Nike and its competitors household names. But the prototype is accidentally destroyed and Carl loses his job.

“I just want to celebrate where I live,” he said. “… I was going to launch a shoe line either way, and I thought, ‘I’m not going to name it the Ted’s Shoe and Sport sneaker’.”