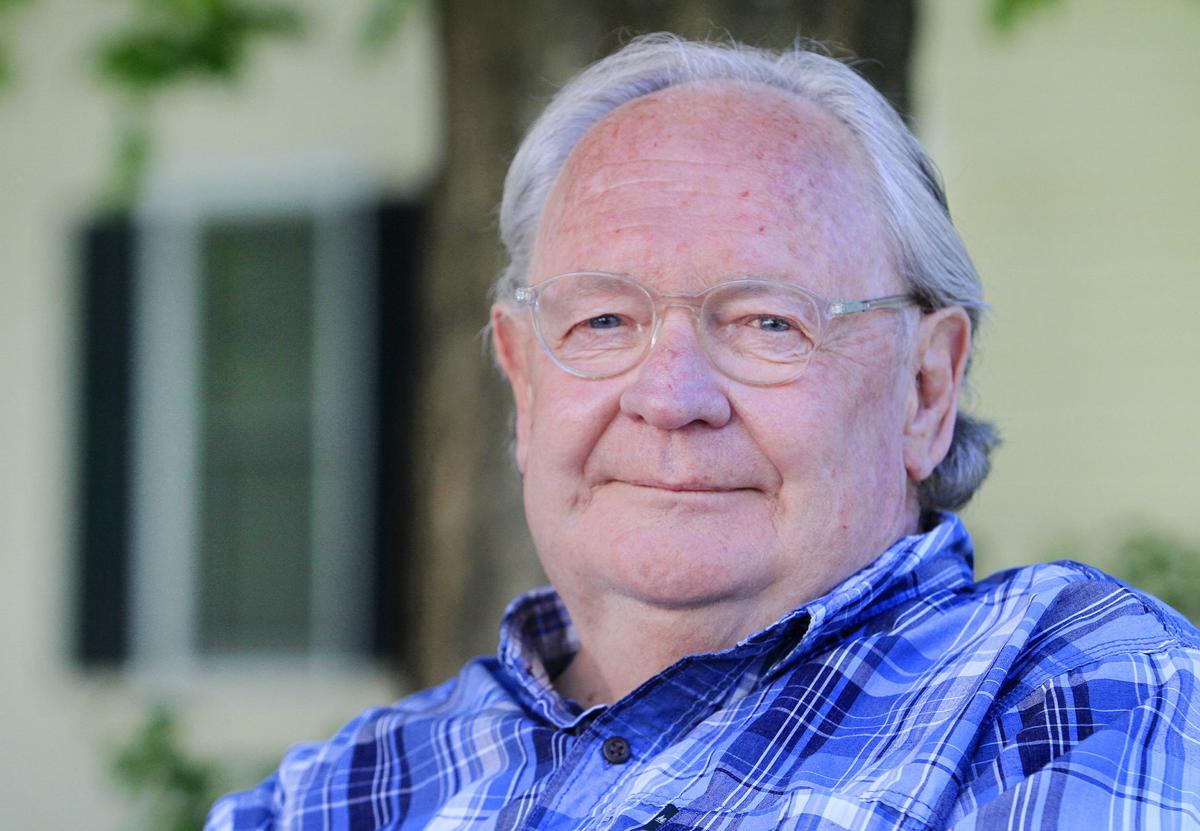 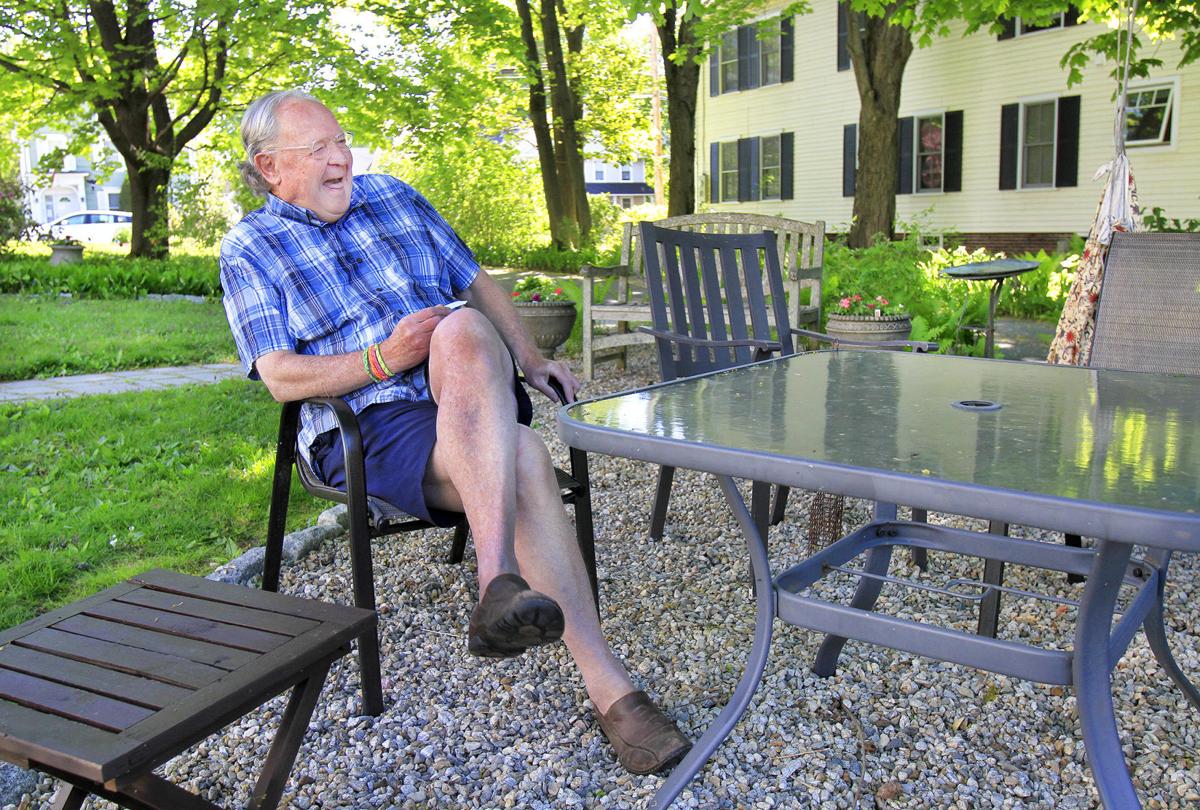 Dr. Paul Krautmann shares a laugh while being interviewed at his Keene home Thursday morning.

Dr. Paul Krautmann shares a laugh while being interviewed at his Keene home Thursday morning.

Paul Krautmann has the kind of slow, mellifluous way of talking that’s easy on the ears. It’s laden with a heavy country twang, acquired during his upbringing in rural Missouri. It’s a storyteller’s voice.

He’s a man very comfortable with himself, a man at leisure, speaking under the shade of a maple tree in his backyard in Keene on the first hot day of the year, which hit nearly 80 degrees.

“We lived in Higginsville, Mo., my mother’s family lived with us,” the 72-year-old retired pediatric dentist begins, talking of his years as a child.

He pauses, as storytellers do, then continues.

“You know, Independence, Mo., was our closest city, and we’d go there to shop from time to time.”

“Well, you know why Independence is important, don’t you?” he asks. “It’s the home of Harry Truman. And it wasn’t unusual for us to drive by Harry’s house there and see him outside in his yard. Dad was a Republican, and I don’t think he liked Mr. Truman, but I was just a kid, so what did I know?”

That’s the way Krautmann gets around to telling a story, indirectly, with little details and vignettes, eddies and swirls.

He talks about his parents.

“They met during the war; they were both in the Army. My dad remained stateside, but my mother was a nurse, and she followed the D-Day guys to Paris, then all the way to Marburg, Germany,” he says. The nursing unit to which she was assigned was scheduled to be transferred to the Pacific, but the war ended after the dropping of the atomic bombs on Hiroshima and Nagasaki.

“She never talked about all the things she must have seen during the war,” he says. “But you can imagine.”

In 1945, his parents, Mary Wanda and Hubert, married and settled in Higginsville, where his father, who had earned a degree in agriculture from the University of Missouri before the war, was hired as the cooperative extension agent, assisting area farmers. It was there that the couple had three sons, Paul the middle one.

When Krautmann was 10 years old, the family relocated to Jefferson City, Missouri’s capital, when his father was transferred there with the cooperative extension service.

He attended Elias Catholic High School in Jefferson City and, following graduation, enrolled at the University of Missouri in Columbia. He attended three years there and then was accepted after his junior year, before graduating, into dental school at the University of Missouri-Kansas City, where he graduated in 1972. At that time, dental schools would accept college students without bachelor’s degrees, if they’d attended for three years.

An aptitude for science ran in the family, as his older brother John became an orthopedic surgeon, and his younger brother, Kevin, a forensic chemist with the Missouri State Highway Patrol, the state’s top law enforcement agency. Both are now retired.

During dental school, Krautmann was recruited by the United States Army to serve a two-year military obligation following graduation. “A lot of us did that. Out of 130 graduates, probably 30 joined the Army, and some others went into the other services.”

Incidentally, Krautmann says that his entire dental school class consisted of men. “We started out with one woman, but she didn’t come back after the first year,” he says. “Now half the dentists are women, probably more than half.”

Immediately following graduation, he reported for duty at Fort Sam Houston in Texas, and commissioned as a captain in the U.S. Army Dental Corps. From there, he was sent to a base in Bad Kissingen, in Bavaria, Germany, in August 1972, where he was one of three dentists serving about 2,000 American servicemen.

It was there he met his wife, Suzy, a native of New Jersey who was teaching school as a civilian at the military base.

She describes her introduction to him.

“At first, I actually only heard his voice, not him. We all lived in an old hotel, and one night my parents called me for my birthday. Paul must have been downstairs as the officer on duty, and we only had one phone for the whole place, and I heard this guy shout out, ‘Call for Suzanne’ in this real loud, twangy accent. I met him later when I was playing pool in the officer’s club.”

The two began taking German lessons together, and started dating.

By 1977, married and then transferred to Fort Gordon, Ga., Krautmann heard from a friend about an opening at the Medical College of Georgia in Augusta for a program in pediatric dentistry.

“On the spur of the moment I went there, and they said, ‘If you can get out of the Army, you got it.’ It was all pure serendipity. That happened on a Friday, and that Saturday morning, Suzy went into labor with our first, Katie.”

He left the Army and spent two years in the residency program.

In 1979, the couple began a search to begin a dental practice, and looked at various locations that might be closer to family members. New Hampshire and Vermont were possibilities, as it was near her parents, who then lived in Wayland, Mass.

“So, we’re driving around, and we find ourselves at Four Corners in Richmond,” he says. “Remember that place? It was a general store. It’s gone now.”

“Well, anyway, we stop in that store and ask the clerk how to get to Brattleboro,” Krautmann says.

“You know what he says to us?” Suzy asks. “He says, ‘You don’t want to go to Brattleboro; go to Keene. It’s just up the road.’ So, we bought a six pack of beer and some sandwiches and drove to Keene. We saw the beautiful church on the square and loved the town. We looked in the phone book and saw there were no pediatric dentists. That’s why we’re here.”

They moved into a large home on Court Street, and he operated the practice from the front of the house. Suzy became a teacher at Franklin Elementary in 1983, and retired in 2010.

In 2000, Krautmann closed his practice. “We had plans to retire early, and I got a job in Germany as a civilian dentist with the Department of Defense.

“I was three weeks in Germany, and Suzy called to tell me she had breast cancer,” Krautmann says. He returned to Keene immediately.

After Suzy’s successful cancer treatment, Paul got a job as a pediatric dentist at a practice in Concord, operated by a friend of his. He stayed there for 12 years, retiring in 2013.

“Pediatric dentistry is a fairly intense encounter, and I got to the point where it was better that it be left to younger people,” he says. “Besides, I didn’t need the money, and I wanted to make way for younger dentists who have such high student debt to pay off.”

The military has played an important role in Krautmann’s life, he says, both his active duty in Germany and his service in the U.S. Army Reserves, which he joined in 1983 and remained in until 2005, achieving the rank of colonel. In 2004, he was deployed to active duty at a base in Iraq for four months.

Though he has spent a considerable time in the military, he is very outspoken in his opposition to war, often seen on Central Square, holding signs and banners as part of The Keene Peace Vigil, which has held these assemblies every Saturday morning since 2001. Each of his emails bears a standard “Stop War, Start Peace” closing. His letters to the editor on the topic appear in The Sentinel from time to time.

“Every once in a while, we get someone yelling at us on the square, telling us to ‘Get a job,’ but we’re not a bunch of hippies,” he says. “We really wish people would just come by and talk with us about these issues.”

Krautmann is highly critical of what he sees as an out-of-control military-industrial-congressional complex, and the nation’s yearly Department of Defense budget, which he says both Democratic and Republican lawmakers, including the New Hampshire delegation, routinely rubberstamp. The lawmakers blindly approve these budgets because they are beholden to defense contractors for campaign contributions, he says.

“Even during this COVID virus and all the money they’re spending,” he says, “nobody’s even mentioned touching the defense budget.”

At a glance: Paul Krautmann