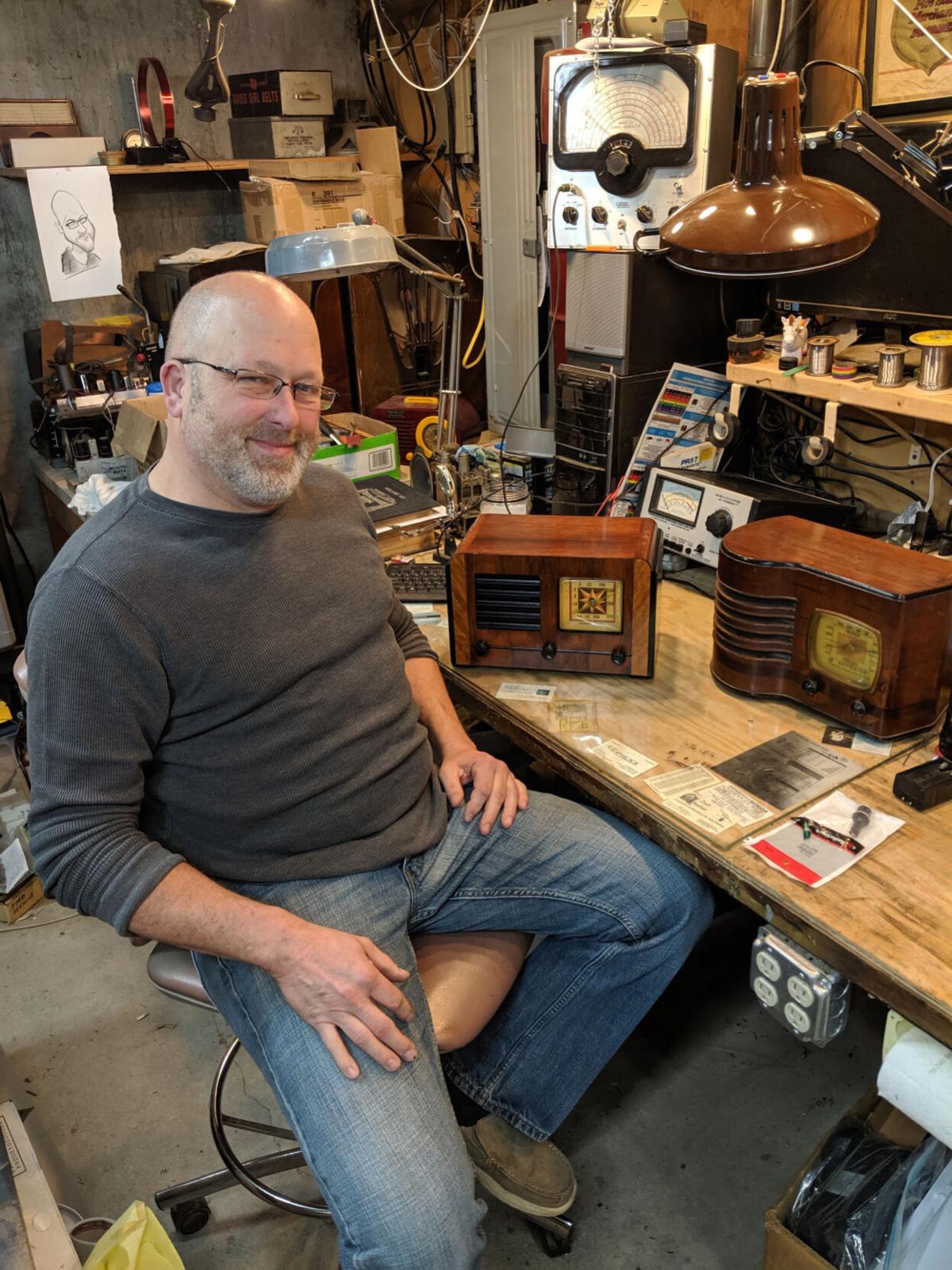 Christopher Thompson of Winchester is shown in his "shop" where he fixes and restores items in his collection. 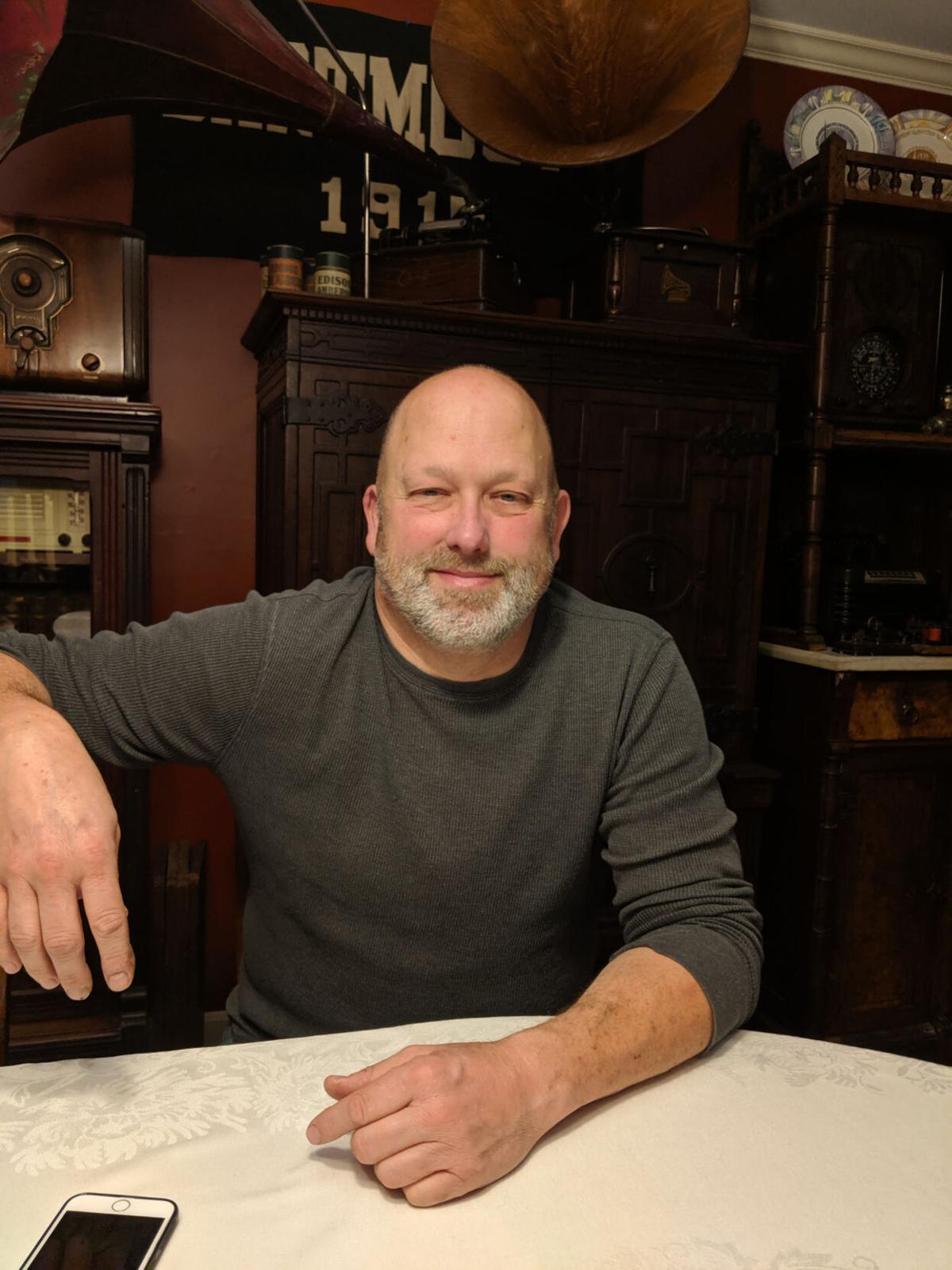 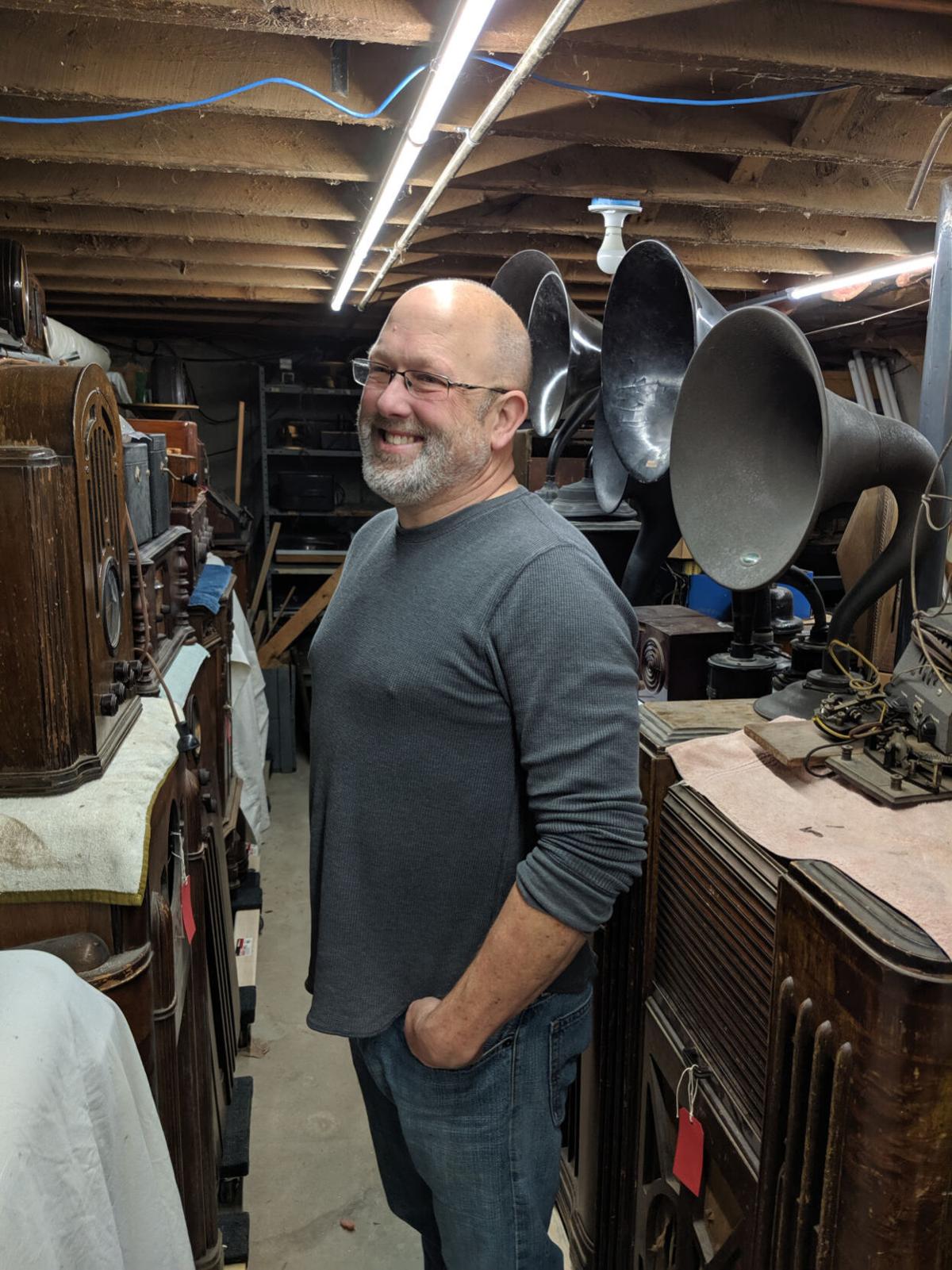 Christopher Thompson of Winchester stands in one of the aisles of his collection of antique radios. “To me, the old radios tell me about all the families gathered around their living rooms and listening together to the broadcasts," he says. "All these things tell a story about the past and about history, about where we came from.”

Christopher Thompson of Winchester is shown in his "shop" where he fixes and restores items in his collection.

Christopher Thompson of Winchester stands in one of the aisles of his collection of antique radios. “To me, the old radios tell me about all the families gathered around their living rooms and listening together to the broadcasts," he says. "All these things tell a story about the past and about history, about where we came from.”

WINCHESTER — It’s a rainy late fall morning here, a bit cold, fog wafting through the trees — easy to imagine winter is stalking the area. Christopher Thompson comes out of his house, walks past four old Mercedes-Benz automobiles he’s acquired over the years, and proceeds to an outbuilding on his property big enough to hold a couple of airplanes.

He unlocks the door and enters, switching on the overhead lights inside, illuminating an enchanting portal to the past — a vast cornucopia of articles, devices, gadgets, curios and thingamajigs from long ago that he’s collected and restored. There are old radios, player pianos, jukeboxes, partly restored antique cars, Victrola phonographs, pay telephones with rotary dials, pinball machines and a plethora of other things too many to list.

To the 56-year-old Thompson, the assemblage is not just a collection of inert relics, long past their prime or usefulness.

“To me, these objects evoke emotion,” he says. “To me, the old radios tell me about all the families gathered around their living rooms and listening together to the broadcasts. All these things tell a story about the past and about history, about where we came from.”

He glides through the tight aisles of his self-styled showroom, pointing artifacts out as a docent would in a museum, enthusiastically explaining the details of an item, its age, how it was built and its provenance.

“It’s probably obvious I wouldn’t live in an IKEA kind of world,” he says, referring to the huge stores that sell inexpensive, build-it-yourself furniture and other household items not meant to survive the wear and tear of time.

Thompson is a real estate salesman with Better Homes and Gardens The Masiello Group in Keene, and a 30-year resident of Winchester. But it’s been a lifelong passion to find, collect and restore the discarded devices of the first half of 20th-century America.

His story, like the objects he collects, has its own trajectory.

He was born in White Plains, N.Y., and raised in a number of locations both in that state and Connecticut.

“We moved a lot. My father had car dealerships, so I didn’t have the time to make a lot of friends, you know, the kind of friends who are forever and forever,” he says. “So, I became kind of self-sufficient, self-contained. In some ways, I was a loner.”

As a result, he created for himself a kid’s fantasy world of exploration and discovery. “I was very curious about the world and eager to learn,” he explains. “I’d wear the tires out on my bike, going around looking for things. I would drag things home. In middle school, we had a barn out back, and I started collecting things like jukeboxes and balloon-tire bikes. I loved mechanical things and machines because I wanted to know how they worked. In many aspects, I had the best childhood.”

Yard sales, junkyards, discarded items by the road, all were scoured by the young Thompson. As he got older, people who knew of his avid collecting would let him know where he might find more. He once bought the contents of an abandoned amusement park. He searched through advertisements and eventually the web, always seeking items that interested him.

His search for objects from the past never waned, he says, a constant in his life.

“I’m a rubbernecker; in my travels around I keep my eyes open. I look in backyards, front yards to see what people have out there.”

And, he mentions, he’s not necessarily looking for valuable items, just things that appear to him interesting, novel or different. In fact, he doesn’t sell many of the possessions he’s collected, but prefers to keep them.

“Don’t ask me what are my favorites, because they all are,” he says.

Still, he’s recognized in the Northeast as a major collector of jukeboxes and antique radios. He’s also a frequent participant in trade shows around the country.

As a youngster, too, he says, he gravitated to older people, fascinated with their histories. “My best friend was really my grandmother, Bertha Ida Thompson. She told me stories about the past, and she taught me a lot. I was attracted to self-made, self-taught people,” he says.

“I learned how a craftsman did his work, how an engineer fashioned a machine,” he says, soaking up their stories and examining the things they owned.

“Also, I learned when I was young that if I invest in people, they invest in me. I learned to talk to people on any level, and I learned to be kind to people. I’m a big believer that people are good and innately kind.”

During his late teens, his collections continued to expand, including his array of jukeboxes, which he restored. He still has many of them.

In 1981, he and his family moved from Connecticut to Walpole, attracted by the quaint village and beauty of the countryside, and he enrolled in Keene State College, which he attended for three years. During that time and for several years afterward, he worked a series of jobs, including at McAuliffe Office Products, which is now closed, and for developer Emile Legere, who at that time was renovating the old Colony Mill on West Street in Keene.

He said his outgoing nature is well suited for sales, whether it be automobiles or real estate. “I do have the gift of gab, and I’d describe myself as a consultive salesman; I’m not trying to push people to buy, but to give them all the information they need, and to help them make a decision.”

In 2009, Thompson left the car business and earned his real estate license and began working for Masiello. This kind of work fits well into his wheelhouse, he says.

“I like sticky wickets; I’m a professional problem-solver,” he says, necessary traits in the buying and selling of homes. “I love what I’m doing; I love transactions with people.”

Still, though, all his time not devoted to real estate is spent enhancing his world of relics. “I have no pre-conceived notion of what my collections will look like; I’m not trying to have the definitive collection of any one thing. I go where my interests go, and that changes.”

Last year, after returning from what he said was a particularly strenuous trade show that necessitated much lifting, he didn’t feel well, and had a friend drive him up to Dartmouth-Hitchcock in Lebanon. There, while in the emergency room, he suffered a heart attack. Three days later, he underwent a triple-bypass operation.

Lying in his hospital bed awaiting surgery, not knowing what his fate would be, he experienced an epiphany.

“Those three days [before surgery] with my family and friends there was a gift,” he says. “I realize now that life is super short. Life is so fragile, and we waste it in superficial ways and on things that are really not important.”

The trauma changed his life, redirecting him in a direction that is more contemplative, and concentrated on nurturing relationships.

“You have just a little bit of time to give your gift back to the world,” he says. “I just want to be a better person, and I’ve learned who I am. It’s a great gift at this time of life.”

At a glance: Christopher Thompson