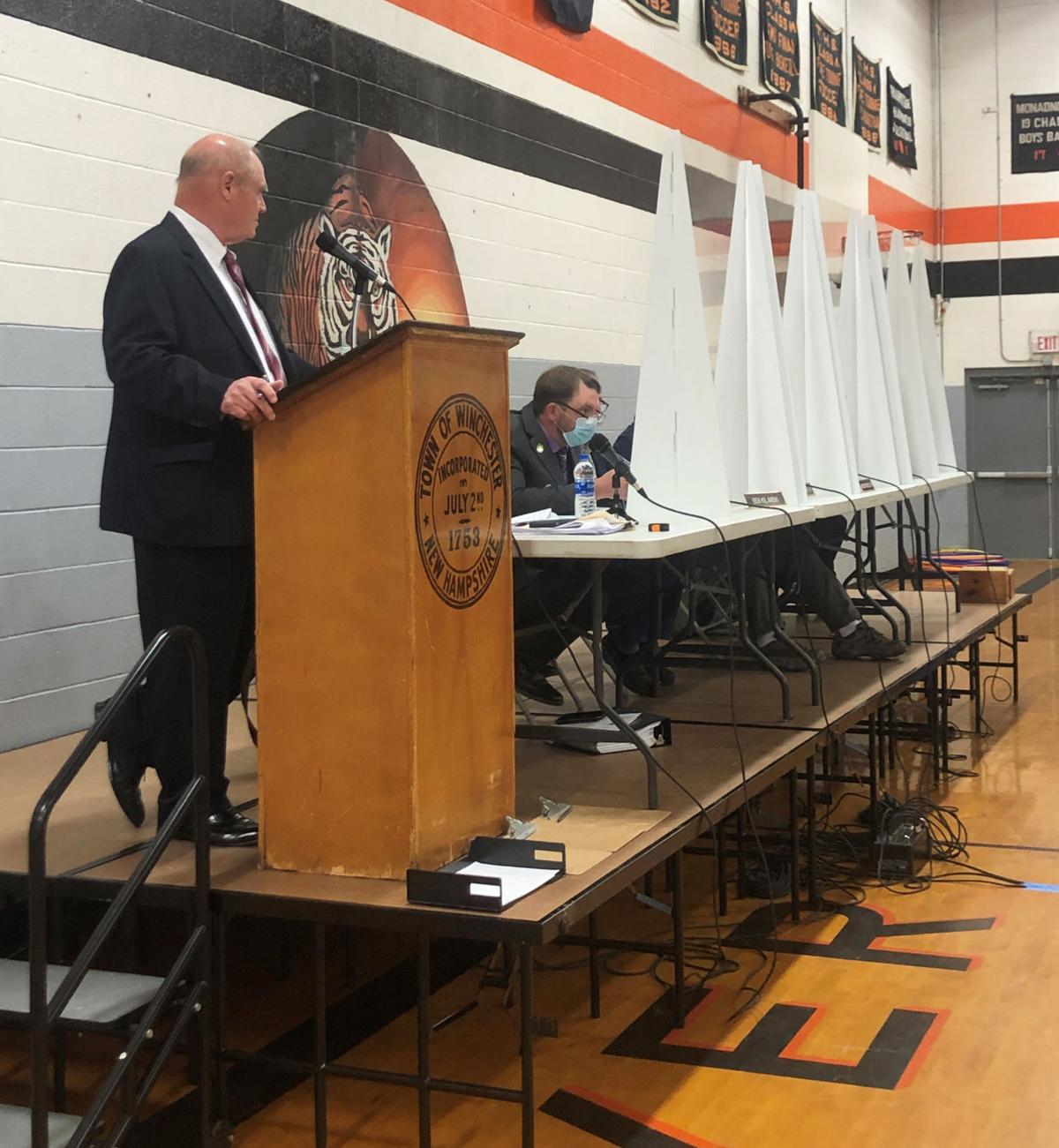 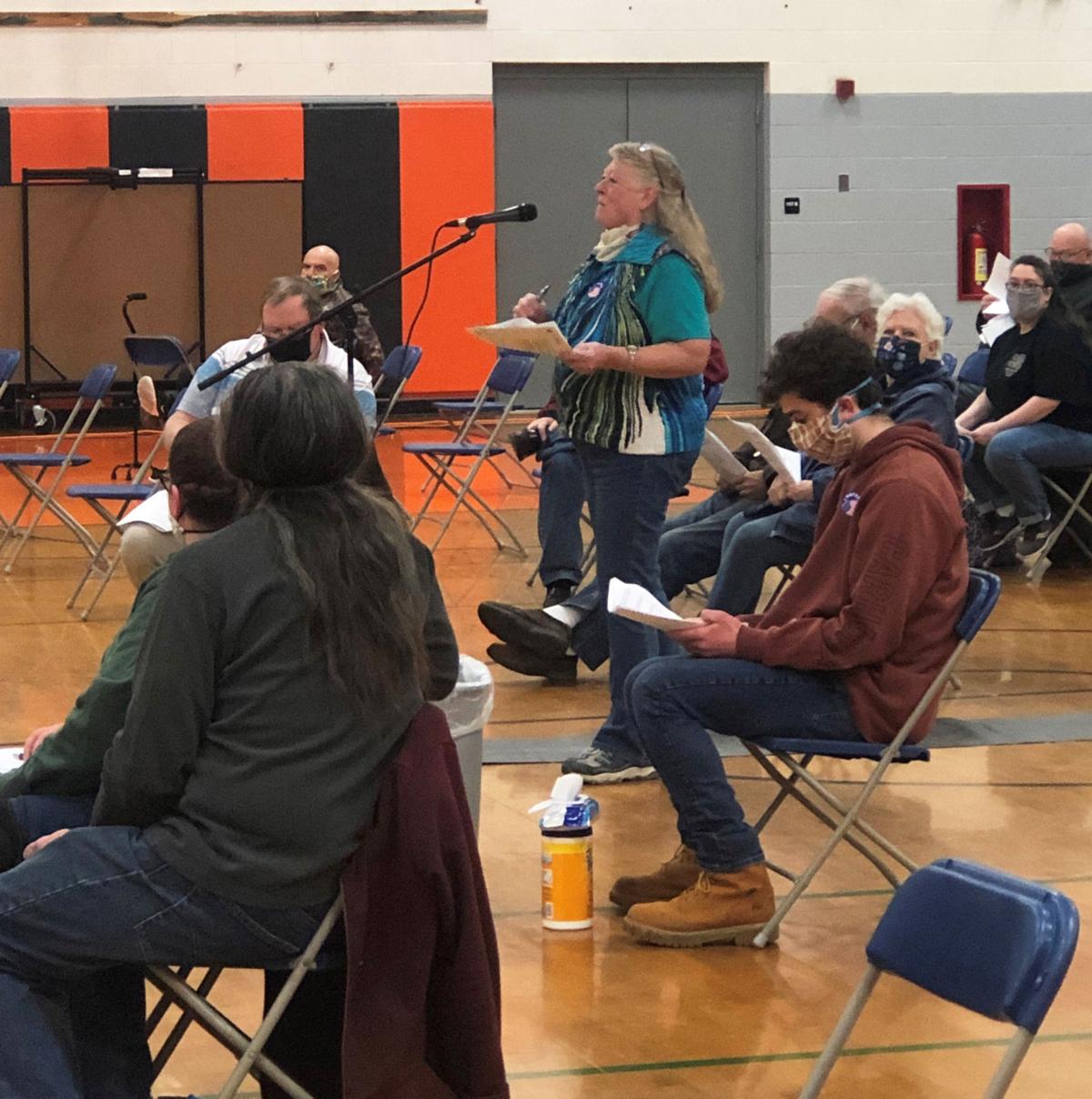 Resident Miriam Johnson asks the selectboard a question during the town’s deliberative session at Winchester School on Saturday.

Resident Miriam Johnson asks the selectboard a question during the town’s deliberative session at Winchester School on Saturday.

WINCHESTER — Town voters made few amendments and had a lengthy discussion over the police department’s plan to hire a part-time social worker during Saturday’s annual deliberate session.

About 50 of the town’s approximately 2,400 registered voters attended the meeting in the Winchester School gymnasium.

The social worker article — which yielded about an hour of discussion — originally asked if the town would raise $25,000 to hire a social worker to work 20 hours per week for police department.

The article was amended slightly by voters to allow for more flexibility in the part-time social worker’s time commitment and now reads as “approximately 20 hours a week, or as case load demands.”

The selectboard does not recommend this article, which was submitted by petition.

The position was initially suggested last fall by then-Police Chief Mike Tollett, who left in January after the selectboard decided in a nonpublic session not to renew his contract.

Instances where a social worker would be appropriate include calls of sexual abuse, domestic disturbances, drug overdoses, suicide attempts and issues surrounding homelessness.

Supporters of the article said by adding this position, people could get connected with area resources instead of jail time or ticketing, while also freeing up police officers to take other calls.

“Law enforcement officers are routinely responding to calls related to these issues, and they are expected to have instant solutions to what are very complex situations,” said resident Mary Gannon, who is a professor at Smith College School for Social Work in Northampton, Mass. “So I know our PD works really hard and responds to things that probably 10, 20, 30 years ago, they wouldn’t have to respond to. We are living in a different time now.”

Resident Kevan Whippie, who put forth the article’s amendment, added that hiring a social worker would have a positive impact for all of Winchester.

“The social worker in the town would give the police department a tool to hopefully prohibit people who made errors of judgment from destroying their lives and heading to jail, and get things sorted out and prevent police involvement in the future,” he said. “It’s something that would benefit the whole town. It’s not just those few individuals.”

Selectboard member Jack Marsh argued there are already several resources for the police department to use if needed, such as Monadnock Family Services, Maps Counseling Services and Monadnock Center for Violence Prevention.

Part-time police officer Gary Phillips, the town’s former police chief, added that those services have worked for the department in recent years, and because of that, he doesn’t see a need for the article.

Ultimately, residents decided to move the article on to voters as amended.

Voters will also choose whether to allow the selectboard to enter into a five-year lease-to-purchase agreement for a 2021 wheel loader.

The article was amended by Chairman Ben Kilanski to update the cost and type of vehicle that would be purchased, because the board didn’t realize it couldn’t use capital reserve funds for a down payment, as it had planned.

Residents will also be asked whether to raise $40,000 for the ACCESS youth program.

Saturday’s deliberative session had been postponed from February due to the pandemic. Residents will vote on the articles at the Winchester School May 11 from 8 a.m. to 7 p.m., when they will also elect town officials.

Six candidates are vying for a pair of three-year selectboard terms. Incumbents Gloria Leustek and Jack Marsh will face Lindseigh Picard, Natalie Quevedo, Theresa Sepe and Lindsey Nutting. There is also a contested race for a three-year term on the budget committee among Brenden Hubbard, Sherman Tedford and Kevin Bazan. And voters will select from five candidates for two three-year terms on the planning board: Brian Favreau, Jason Koerber, Bridget E. Pearce and incumbents Jordan Sharra and Dean Beaman, the board’s chairman.