WINCHESTER — The town’s school board says the Winchester School District will have to get rid of public kindergarten, athletic programs and student transportation to Keene High School if voters approve the proposed budget that will appear on the ballot in March.

The district’s default budget, which takes effect if the proposed budget is voted down, is $12,770,574.

Resident Tyke Frazier presented the amendment Thursday, bringing the proposed budget down to $11,270,000 — about equal to the operating budget voters approved in 2017.

He argued the budget should be the same as it was three years ago, due to the lack of improvement in the district’s educational rankings since then. The proposed budget’s impact on the town’s tax rates was also a concern.

“This is about what’s best for the children. This is about getting the school to understand that we can do more with less, and money isn’t the end-all-be-all solution in this,” Frazier said Tuesday. “... It may or may not pass when it goes through to the article, but this has drawn attention ... to the fact that the school system has had failing test scores.”

To bring the budget down to the amended figure, school board members presented cuts during their regular meeting Monday night. The reductions would include cutting the district’s kindergarten program, teaching positions on a few grade levels and transportation for high school students.

Other reductions proposed include eliminating all of the district’s athletic programs and field trips, saving just over $46,000.

School Board Vice Chairman Kevin Bazan said Tuesday that the board went through the budget line by line before making the proposed reductions.

”I’m not exactly confident there are other ways in which to cut,” he said.

Cutting the kindergarten program, along with four teachers in other grades, would save the district more than $783,000, according to the reduction proposal. 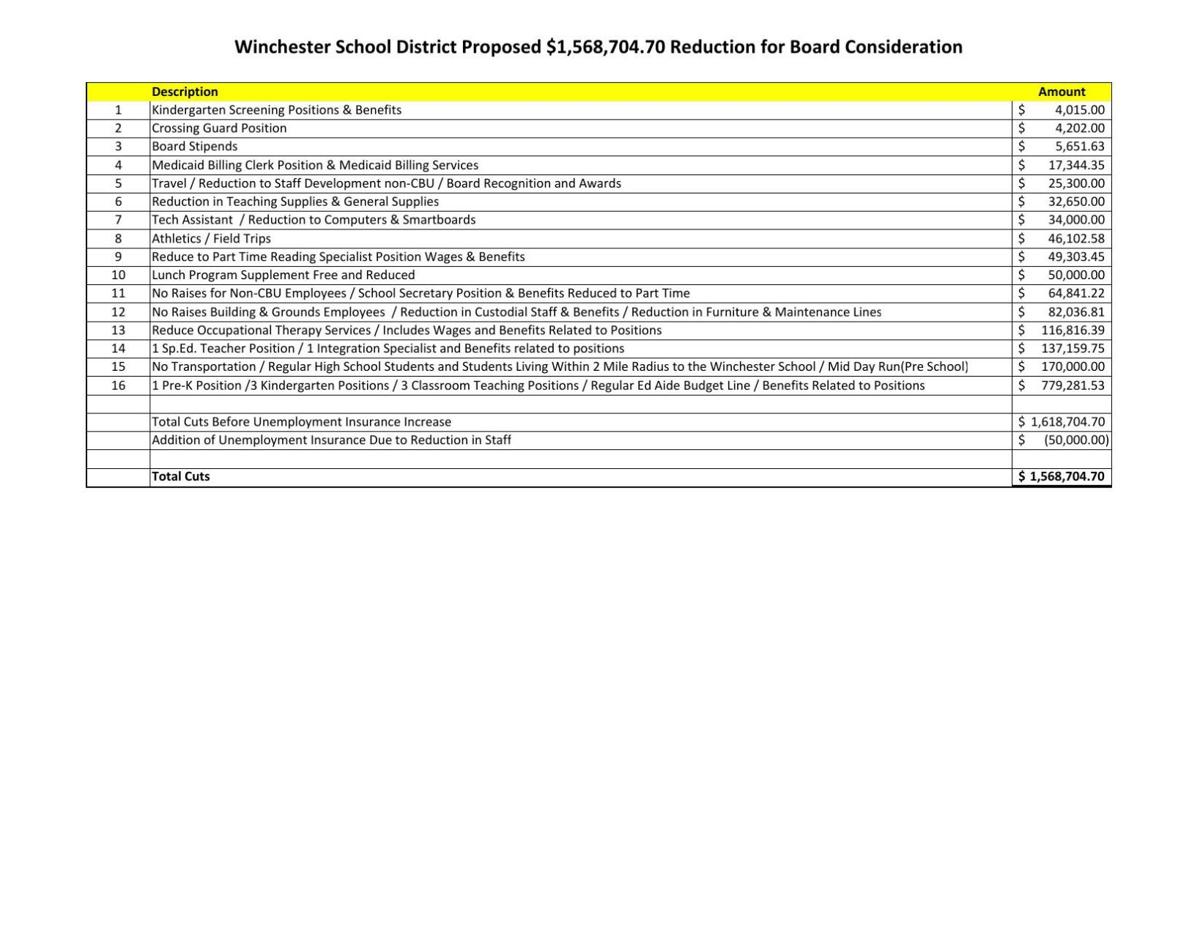 New Hampshire is one of a few states that doesn’t require full- or half-day public kindergarten. Public education is required only for ages 6 to 18, according to N.H. Department of Education spokesman Grant Bosse.

“We’ve seen the positives that [kindergarten] can bring to a student, especially one who might come in with a special need that can be addressed early,” Bazan said. “If this goes through, we won’t have that student until 1st grade.”

No longer providing busing for Winchester students who attend Keene High School would save $170,000.

“We would hate to have to ask parents and relatives to have to transport their high school-age students, and what a detriment to those kiddos to have to figure out ... who’s driving me today,” Lindseigh Picard, the school board chairwoman, said Tuesday.

The board is also proposing to cut one special-education teaching position and one integration specialist, as well as their associated benefits, totaling more than $137,000.

Other proposed reductions would eliminate a crossing guard position, stipends for school board members and raises for several employees. There would also be a reduction in teaching supplies and other materials.

While they understand the community’s frustration with high tax costs, Bazan and Picard said the proposed budget decrease is too drastic.

“Ultimately, [these cuts] undermine all the wonderful things happening in the Winchester community,” Picard said.

“The school board doesn’t support these cuts. We want people to vote no,” she added.

Residents will vote on the warrant and pick district officers on March 10 at Winchester Town Hall. The polls are open from 8 a.m. to 7 p.m.