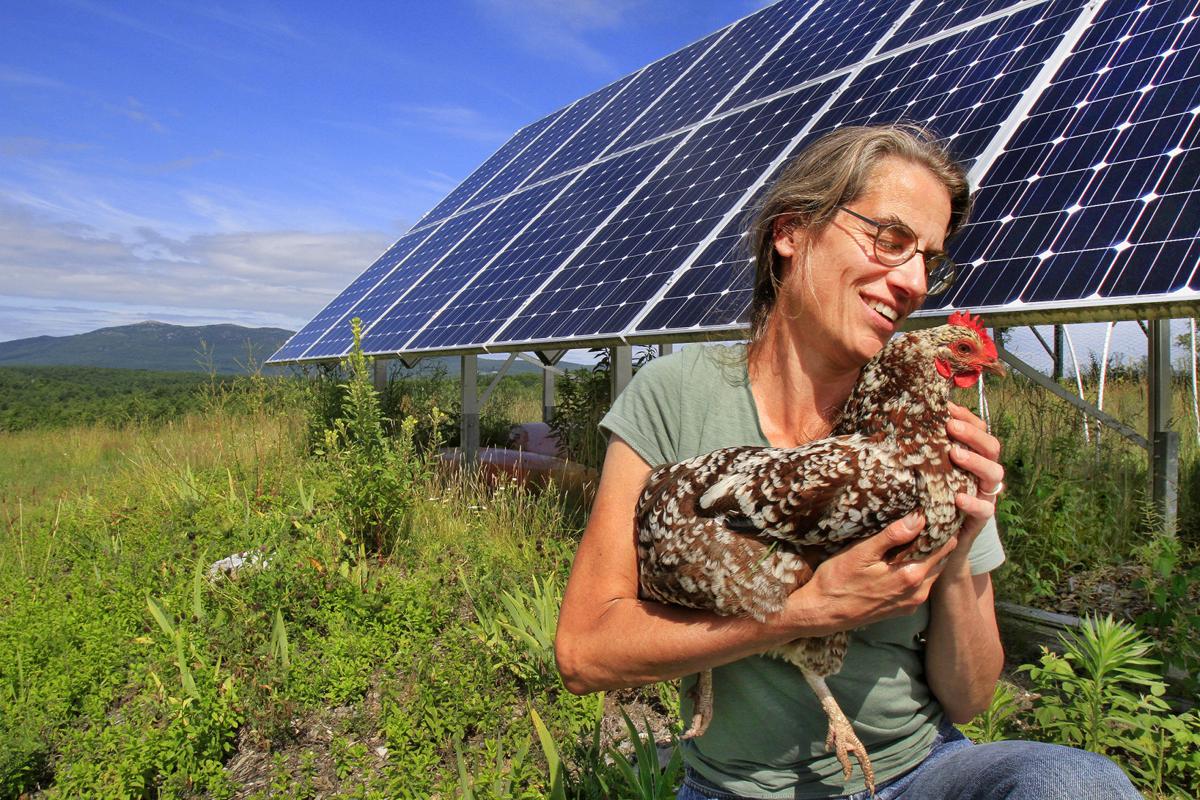 Tory McCagg, who just published a book about living off the grid, with one of her chickens and solar panels at her home in Jaffrey. 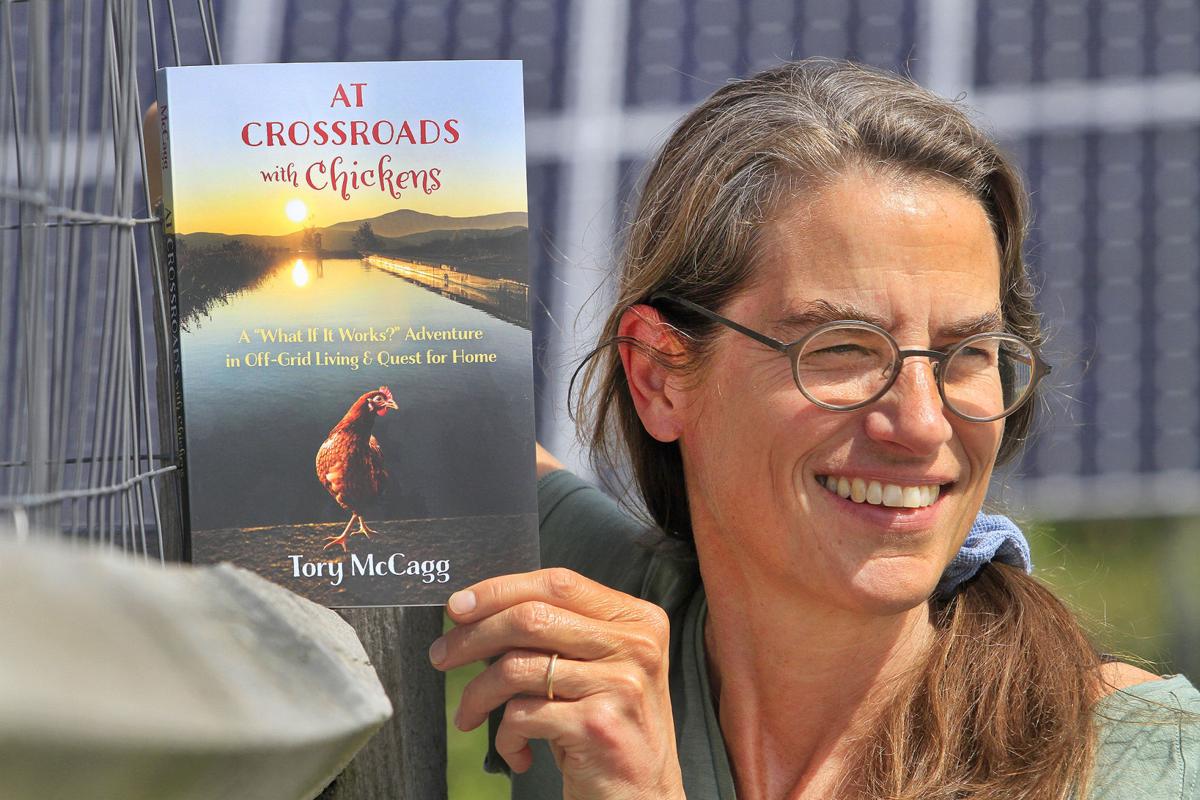 Tory McCagg, of Jaffrey, with her recently published memoir.

Tory McCagg, who just published a book about living off the grid, with one of her chickens and solar panels at her home in Jaffrey.

Tory McCagg, of Jaffrey, with her recently published memoir.

JAFFREY — It started with six chickens and the quest for “happy eggs.”

It’s become a lifestyle focused on healing a bruised and battered Earth.

And while the story is far from over for Tory McCagg; her husband, Carl Querfurth; and the hilltop home they’ve named Darwin’s View, there was already plenty of material for McCagg to begin writing a memoir.

“At Crossroads With Chickens: A ‘What If It Works?’ Adventure in Off-Grid Living And Quest For Home,” was released by Bauhan Publishing of Peterborough in June. It’s the first work of nonfiction for McCagg, an award-winning fiction writer whose published works include short stories and the novel, “Bittersweet Manor,” which was released in 2014.

McCagg, 57, grew up in Connecticut and Michigan before spending about 30 years of her adult life in Providence, R.I. That is where she met her husband, a trombonist. McCagg is a writer by trade and an accomplished flutist with a master’s of fine arts degree from Emerson College in Boston.

“I think through my writing, and that helps me clarify my very muddy thoughts,” she said.

On the surface, “At Crossroads With Chickens” is about the experience of raising chickens, exploring the meaning of “happy eggs,” and the adventure of living off the electric grid.

McCagg said she first got chickens while she was still in Providence to settle the debate for herself about what a “happy egg” is, such as whether it was laid by a cage-free hen or an organically-fed one. One of the first challenges she encountered with her flock was one of the chickens was a rooster, and roosters weren’t allowed in the backyards of Providence, she said.

With her husband originally from Peterborough, the couple often traveled to the area to visit his family. That became tiring over time, and then in 2000, her husband’s niece was born, and they decided they wanted to live closer to his family, McCagg said. In 2006, they bought a 124-acre parcel covered in woods in Jaffrey that would eventually become their new home. They hired a company to log the property, and left, she said. When they came back, they had a 320-degree view that included the Wapack Trail, northern Massachusetts and Mount Monadnock.

“That was a big mistake,” she said. “We found we had a hill that had been really damaged by the logging process.”

So she and her husband set to work trying to heal the land over time and figuring out what they should build on it, she said. They settled on a timber-frame house measuring 24-by-38 feet, powered by a solar array and battery.

Between the rooster situation and the need to make sure the solar array was working and charging, she and her husband decided to spend the winter of 2012 in Jaffrey, she said. Besides the six chickens, they also brought the two cats they had at the time, Nick and Nora. And for those first few years, they went back and forth between Providence and Jaffrey before settling in Jaffrey full-time.

She said she blogged about the experience for about two years, and then started putting what she was writing into something that resembled a book. She finished writing the book in 2017 or 2018, she said.

“The book is about getting to a place where I can call this place home,” she explained.

It also focuses on the relations between humans and nature, and draws parallels to her mother, Louise, as she lives with Parkinson’s disease, she said.

Since moving to Jaffrey, McCagg has become involved in the community, including helping to establish the Jaffrey Climate Initiative, a citizen action group promoting stewardship of the environment.

Beth Brown of Peterborough grew up with McCagg’s husband, and met McCagg through him.

She described McCagg as witty and friendly, with a passion for music and the environment. McCagg is sophisticated and down-to-earth — a “city girl” who has become acclimated to living in the country, Brown said.

“Tory is just one of those women who is as comfortable in a black velvet dress as they are in blue jeans,” Brown said. “She works to make the very best of the complicated world we live in.”

McCagg is deeply connected with the community environmentally, socially and culturally, and she has a strong desire to live responsibly, Brown said.

“She’s a doer, and she makes a difference.”

Since the original six chickens, McCagg has cared for multiple generations of the birds. By last count, she and her husband had raised 42 chickens, she said.

But eggs aren’t the only food source on the property, which also carries a conservation easement with the Monadnock Conservancy. There are a mixture of vegetable and flower gardens, and her husband is trying to grow wheat, she said. Still, she noted, living sustainably is a work in progress, and one they are far from finishing.

While it costs less to have the solar array and battery installed at Darwin’s View than to run electricity to the property, the reason McCagg and her husband decided to try living off the grid runs much deeper.

Decades ago, McCagg said she took a college course that included a discussion about water, and that despite it being a precious resource, capitalism was harming it to the point that there could be nothing left. Since then, she had sought to be mindful of her water use, she said.

But the more she read about farms and how humans affect climate change, the more she wanted to give back to the environment by doing the best she could to make intentional choices to better the planet and take responsibility, she said. That includes determining how Darwin’s View fits into that, she said.

“We’re trying to figure out what we want to do in this place,” she said. “We hope it will become way bigger than us in some way, but we don’t know how, yet.”

At a glance: Tory McCagg