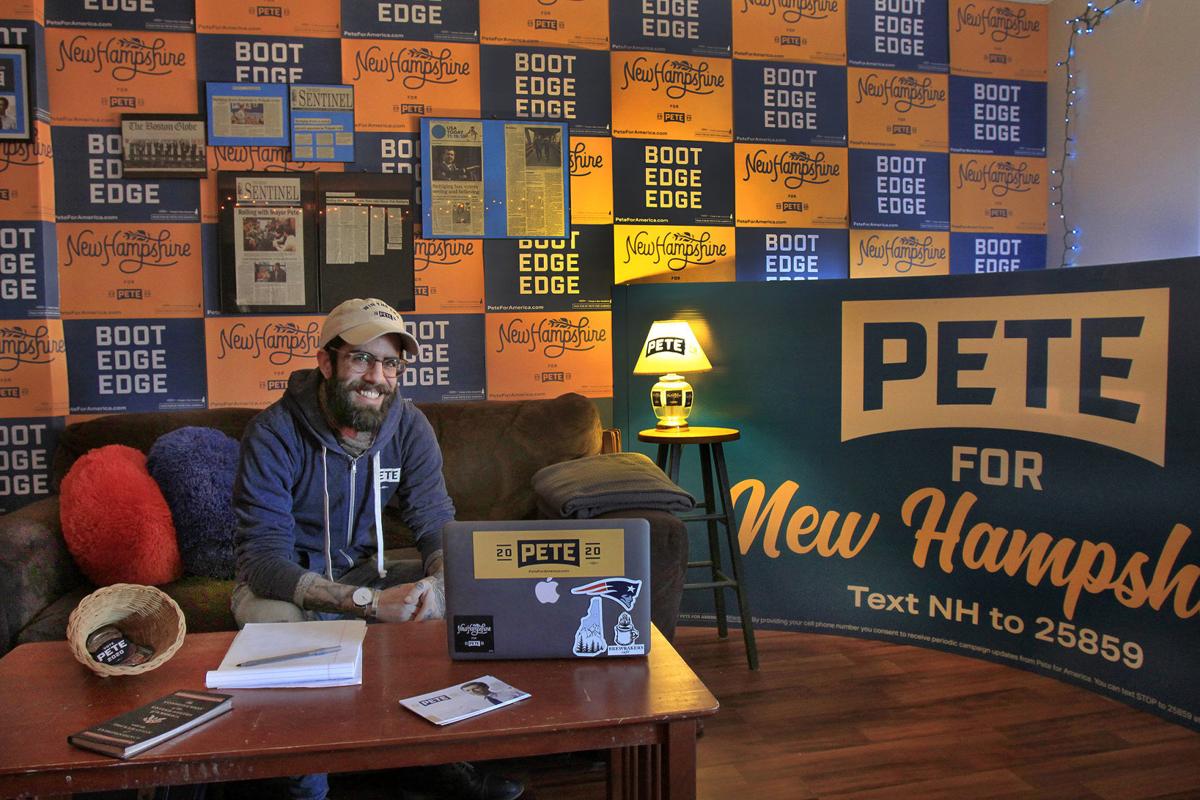 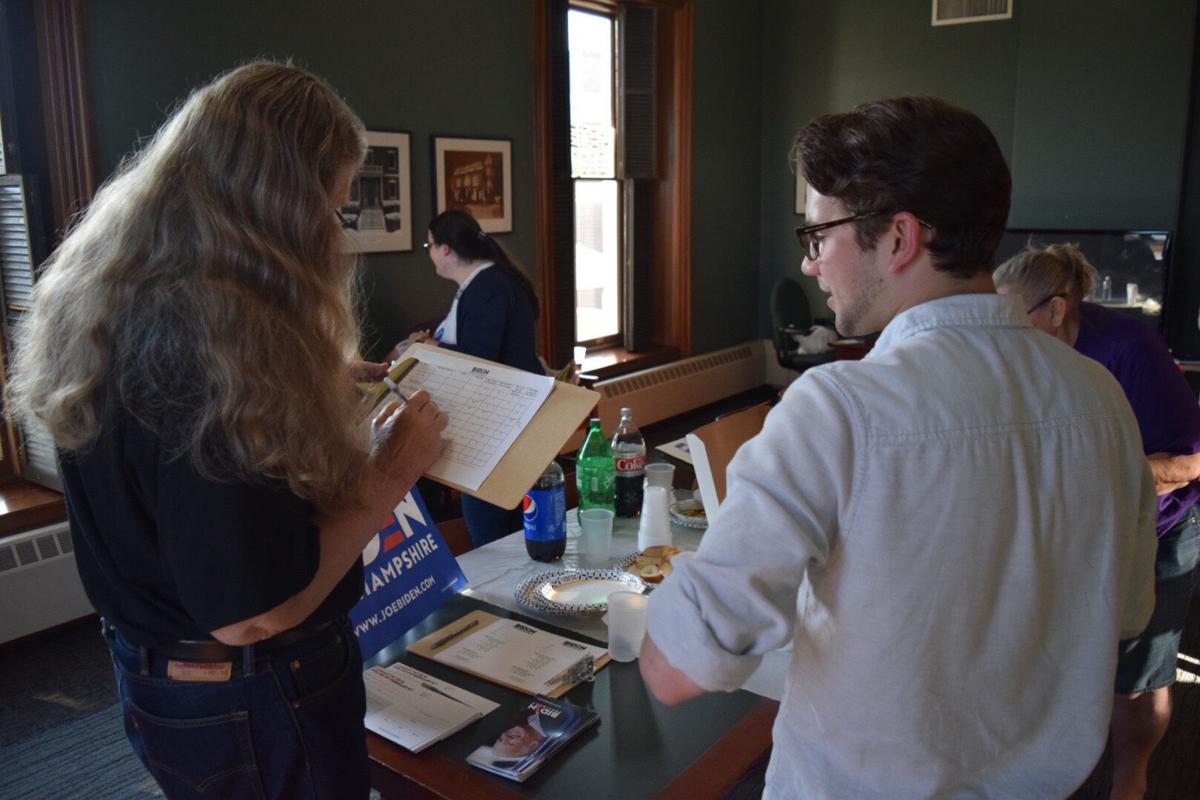 In this file photo from August, Margaret Sawyer of Keene, left, fills out a volunteer form at the Keene Public Library from organizer Jake Blaut, right, who is based in Peterborough for Joe Biden’s campaign. At the time, Sawyer said newly announced Democratic presidential hopeful Tom Steyer had caught her attention, but that she would potentially phone bank for Biden.

In this file photo from August, Margaret Sawyer of Keene, left, fills out a volunteer form at the Keene Public Library from organizer Jake Blaut, right, who is based in Peterborough for Joe Biden’s campaign. At the time, Sawyer said newly announced Democratic presidential hopeful Tom Steyer had caught her attention, but that she would potentially phone bank for Biden.

Over the summer, Adam Richardson quit his day job in Los Angeles, packed as much as he could into his 2009 Nissan Altima and drove across the country for a new gig in the Elm City.

Richardson, 35, had a steady day job as a video producer in the beauty industry and a rare rent-controlled apartment in the City of Angels, where the median rent for a one-bedroom unit is $2,362.

But a job with South Bend, Ind., Mayor Pete Buttigieg’s presidential campaign as the regional organizing director for the Keene area changed all of that.

As if finding himself in a scene from “The West Wing,” Richardson said the wheels began turning when he watched Buttigieg’s official campaign kickoff speech on TV in April with a friend.

“He delivered this one line, and he said, ‘It’s time we walk away from the politics of the past and toward something totally different,’ ” Richardson said. “And it was right around that time my friend looked at me and said, ‘You need to go work for him.’

For all of the worries surrounding workforce development in New Hampshire and its aging population — which weigh on lawmakers and business leaders trying to find new ways to attract young people to the Granite State — one constant remains.

Every four years, a crop of idealistic recent college graduates and young professionals trade the stability and familiarity of their everyday lives for long hours, an uncertain near-future and sometimes their first New England winter as staffers for presidential campaigns in the first-in-the-nation primary.

While they come from myriad backgrounds and all corners of the country, these campaign workers say what unites them is an optimism for the future of the country, a desire to be part of something larger than themselves and a fascination with New Hampshire’s civic culture.

‘Ready for an adventure’

Organizers like Richardson are responsible for implementing the so-called ground game of presidential campaigns, managing teams of junior staff and volunteers who will go door to door, hold informational sessions and conduct the vast majority of face-to-face contact campaigns will have with voters in the Granite State — no matter how many town hall forums and diner drop-ins are feasible for any candidate.

Organizing directors also knock on doors themselves and must amass a breadth of knowledge on their respective turf to level with voters on the issues.

The turnaround can be daunting.

Maddie Robbie, the new regional organizing director in Cheshire County for Andrew Yang’s campaign, has not even been in Keene for two weeks yet.

Robbie, 23, hails from the San Francisco Bay Area, and worked for a public affairs consulting firm in Seattle after graduating from Gonzaga University in Spokane, Wash.

“I guess I was ready for an adventure,” Robbie said when asked why she dropped what she was doing to come work for the Yang campaign.

Like many out-of-state campaign staffers interviewed for this story, Robbie said she had never been to the Northeast or New England before, and is still acclimating to the coldest weather she’s ever experienced.

The anticipation of touching down in the Monadnock Region can prompt copious Internet research,with first impressions of Keene falling at the whim of Google’s search algorithm.

“The first thing I found — there were two things: Keene State, so I thought ‘college town.’ And then, pumpkins,” Robbie said, referring to the trove of online articles referencing the 2014 riots outside the Keene Pumpkin Festival.

Jake Blaut, a recent Florida State University grad, took a job with Joe Biden’s campaign in May as a Peterborough-based organizer, though he also spends a considerable amount of time around Keene.

The Cincinnati native, 22, said he had already accepted a job as an immigration paralegal back home and was about to start in a week. But when the Biden campaign responded to his application, he said, he was ready to shake things up.

“I was entirely expecting to be living in Cincinnati right now, but thankfully, I’m up here in New Hampshire and working for Joe, and I wouldn’t want to be any place else,” Blaut said.

For all of the hype surrounding the first-in-the-nation primary, these 2020 campaign aides said they continue to be impressed by Granite State voters.

The civic culture in the state, they said, is part of what makes taking the leap worth it.

“All of my friends in Florida, they have so many different opinions, and they’re like, ‘Oh, I have this race figured out,’ ” said Conner Jure, a field organizer for Cory Booker’s campaign who hails from St. Petersburg, Fla. “But voters in New Hampshire, I mean they’re so undecided, and they have no idea what’s going to happen because they’ve seen how things can change within minutes.

Bradley Fuller, a 31-year-old from Fort Worth, Texas, said he has been more than pleased during the transition from his master’s program in political management at George Washington University in the nation’s capital to working as Amy Klobuchar’s lead organizer in Peterborough.

Compared to both the district and Texas, Fuller said canvassing and having genuine interactions with voters is on a whole new level in the Granite State.

“People here, they actually open their doors,” the former brand investor said. “They’ll actually have a conversation with you on their doorstep, you know?”

Another aspect of New Hampshire’s political engagement that the campaign staffers touted is the network of what’s known as supporter housing, where organizers and aides coming from out of state can stay in a local’s spare room for free.

Almost all of those who spoke with The Sentinel said they have relied on supporter housing. Richardson even went so far as to say it has allowed him to afford to hold onto his L.A. apartment, which he plans to sublet for as long as he’s on the Buttigieg campaign.

JoAnn Fenton, a longtime Keene Democratic organizer and fund raiser, said she keeps a running list of all of the Democrats in Cheshire County who would be suitable hosts for whichever campaign may need them.

During the 2004 primary, Fenton said her home ended up becoming a pop-up field office for then-Vermont Gov. Howard Dean’s campaign. This cycle, she said she has stayed neutral and put up newly arrived staffers waiting for longer-term lodging.

She and her husband, Bill, also host college-aged baseball players for the Keene Swamp Bats most summers. But she noted the political guests tend to be a bit older, out of the house more because of the long hours, and generally more tidy.

Fenton described her former guests as bright and idealistic, and a constant reminder that there are still plenty of Americans who get into politics for the right reasons.

“They could get a job somewhere else and get paid better,” she quipped.

Years later, she said she still keeps in touch with some of the campaign staff who stayed with her, and keeps opening her home cycle after cycle because of the optimism they elicit from her.

“They become family,” Fenton said. “I just love these kids.”