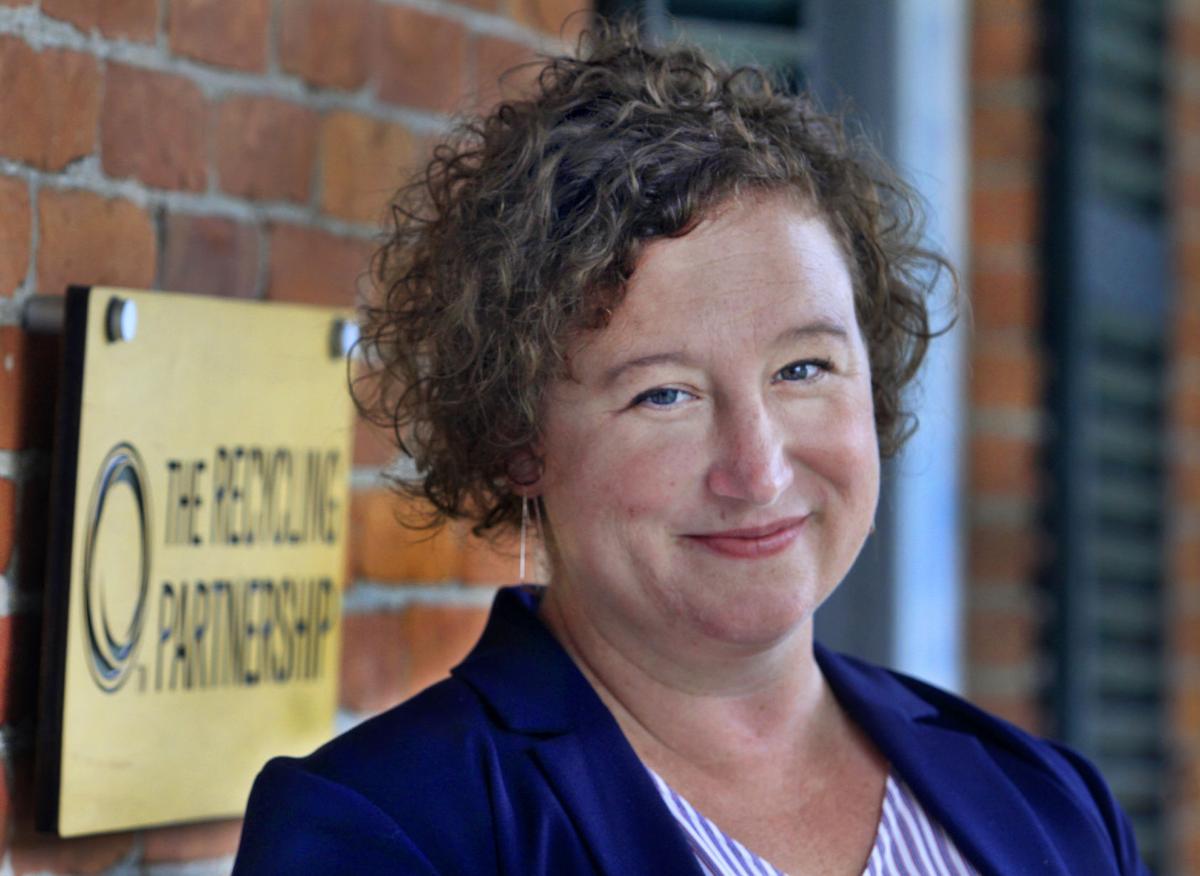 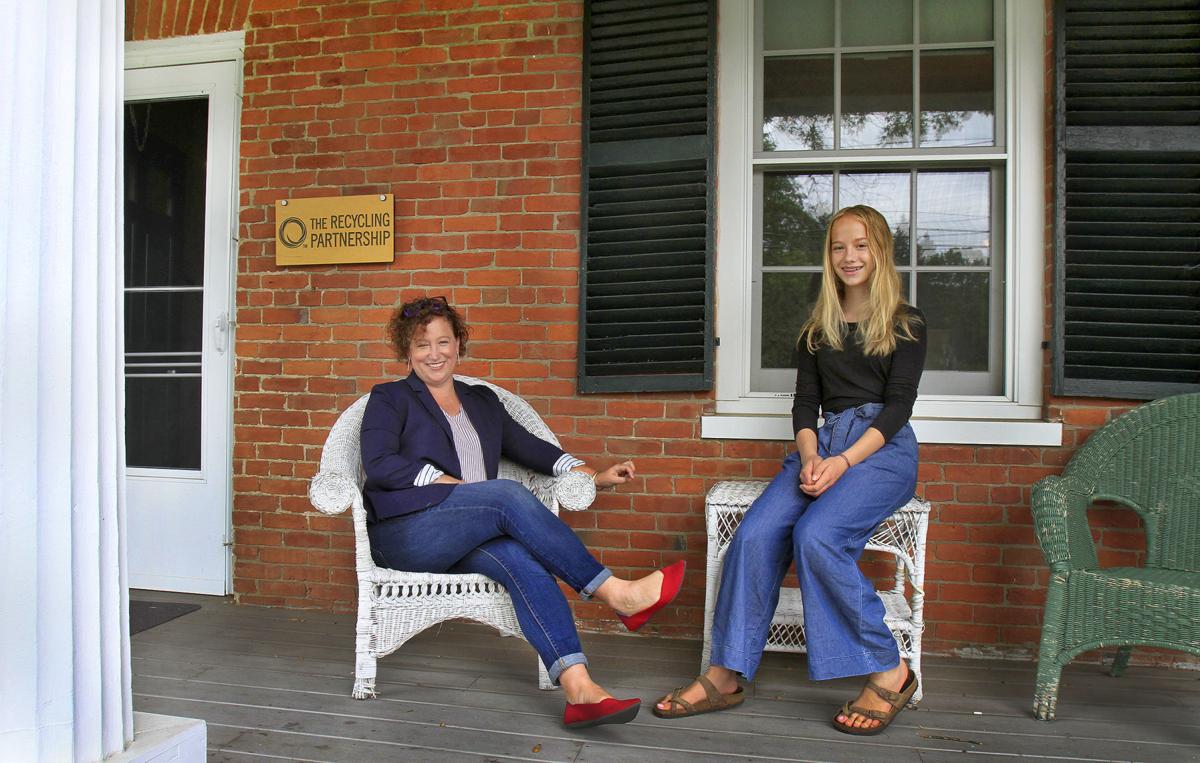 Keefe Harrison, founder and CEO of The Recycling Partnership, relaxes at the Walpole office with her daughter, Etta.

Keefe Harrison, founder and CEO of The Recycling Partnership, relaxes at the Walpole office with her daughter, Etta.

WALPOLE — Keefe Harrison sits in a white wicker chair on the front porch of the 186-year-old building that houses The Recycling Partnership, an environmental nonprofit she started in 2014. It’s a mild 70 degrees, a beautiful summer morning that will morph later into a blisteringly hot afternoon.

“This town is such a great place to live, and a beautiful place to raise a family,” says the energetic 43-year-old, who was born in Indiana, raised outside Asheville, N.C., and who moved to Walpole from Half Moon Bay, Calif., with her husband and two children in 2015.

But she’s not finished singing the praises for the burg, founded in 1736 as a fort used by early settlers.

“It’s an amazing place. I’ve met such fascinating people; there are such good global citizens here. Everyone I meet here is doing something interesting,” she adds, waving to two friends who are walking by the brick building adorned out front with a series of Doric columns. It’s known as the Griswold Place, located just a half-block from Walpole’s main intersection of Washington and Westminster streets.

She can include herself in that “interesting” category, having begun her organization on an idea and a small budget that has now expanded to what she says is a $100+ million, corporate-funded nonprofit with 46 employees in offices in Walpole, Asheville and Chapel Hill, N.C., Atlanta and Portland, Ore.

Four employees, including Harrison, work from the Walpole office.

“We’re out of control with plastic production,” she says, “and our space, our mission, is to bring everyone together to create solutions for recycling.”

The Recycling Partnership harnesses the resources — that is, money — donated from corporations to develop pragmatic solutions that municipalities can utilize to better address the issue of recycling. It also informs and lobbies corporate executives to realize and understand the enormity of the problem and its implications for the environment, and works toward modifying production methods to alleviate the amount of “single-use” plastic products.

“I like metrics and change and doing good for the world. It’s very rewarding,” she says. “But change takes money, and we need corporate help. There is no global government, but there are global companies.”

And although she works with environmental advocacy groups such as Greenpeace, Harrison says it does little good to simply rage against corporations. Better to make them partners in solutions.

Her story starts with growing up near the town of Rensselaer in northern Indiana, one of two daughters of Steve and Dale Govus, he a crop-duster and aircraft mechanic and she a stay-at-home mom and competitive carriage-driving equestrian. When Harrison was 10, she and her family moved to Forest City, N.C., to be near her mother’s relatives.

“We were an outdoorsy family,” she says in the introduction to her TEDx video lecture last year at the Stockbridge Theatre at Pinkerton Academy in Derry. “My dad loved to fish at the coast, my mom is a big horsewoman and into any sort of animal rescue. I have biologists, educators, activist family all around me. And so, from my very beginning, I knew that my life ahead of me was going to be about me doing something for the planet …”

After high school, she enrolled in the University of North Carolina Greensboro. During her time there, she worked on a logging crew in the state, researched sea turtles in Costa Rica and studied reindeer husbandry in Finland on a study-abroad stint at the University of Oulu.

Also, while at UNCG, she got a job at its recycling center, and the experience led her to change majors from biology to human ecology and natural resources, in which she earned a Bachelor of Arts degree in 2000.

At the recycling center, she met another young student, Ryan Harrison, whose job was to collect cans from the campus dormitories. The two accompanied a professor to an academic conference in Arizona, and instead of returning home right away, the couple stole away for several days of sightseeing in the desert. They fell in love and married. They have two children, daughter Etta Bea, 14, and son Miles, 12.

Harrison stayed on at the university for three years following graduation, working as sustainability director and recycling manager, before spending three years with the North Carolina Division of Pollution Prevention and Environmental Assistance. She then moved on in 2005 as a contractor to the Environmental Protection Agency working under the aegis of Booz Allen Hamilton, a management and technology consulting firm. In 2011, she started working with Resource Recycling Systems, leading a team that developed the prototype that in 2014 would become The Recycling Partnership.

At the time she founded the partnership, the family was living in Half Moon Bay, Calif., where her husband worked as a designer for GoPro, the camera manufacturer.

Although Half Moon Bay was beautiful, a colorful fishing village on the California coast just south of San Francisco, she said they found the area too crowded and congested.

Looking for a spot to relocate the family, a friend of hers from New Hampshire drove her around the state, and they visited a number of towns.

“We went to Walpole, and I remember calling my husband and telling him, ‘I think I found it.’ “

Once established in the village, Harrison found that keeping up with the staggering growth of her outfit required almost constant travel and work.

“I’m off-the-wall busy, even during the virus,” she says, and before the pandemic, she traveled extensively. “The past few months are the most time I’ve been at home in 15 years.”

Harrison emphasizes that the issue of recycling is pressing upon the world, caused by an increasing use of plastics and an inability by municipalities to recycle it.

Last summer, as part of her role as an adviser to the Ocean Plastics Leadership Summit, she participated in a week-long voyage on a 400-foot research ship in the Atlantic. It brought together scores of leaders from environmental activist groups and corporate executives of such huge corporations as Dow, Procter & Gamble, Coca-Cola, Nestlé Waters, General Electric, Colgate-Palmolive, Hasbro, Mary Kay, Kimberly-Clark and Clorox.

The ship stopped at a spot in the open ocean 50 kilometers east of Bermuda, and all aboard were outfitted with snorkels and fins to see firsthand just how polluted the sea is with plastic.

It was an eye-opening experience for the executives, Harrison says, and an opportunity for both sides, activists and corporate leaders — often at loggerheads — to rub shoulders and sit down for discussions about solutions.

An article about that trip in Outdoor Magazine in August 2019, describes the problem of plastic in the oceans:

At that rate of increase, Harrison says, by 2050 the ocean will contain more plastic than fish.

She emphasizes that there is not much time left before environmental degradation overcomes us, and it’s crucial that all parties cooperate toward solutions.

“It irks me when people pass the buck. There is no time left. It’s the virus now, but after that, it’s still climate change. I feel very driven.”

At a glance: Keefe Harrison