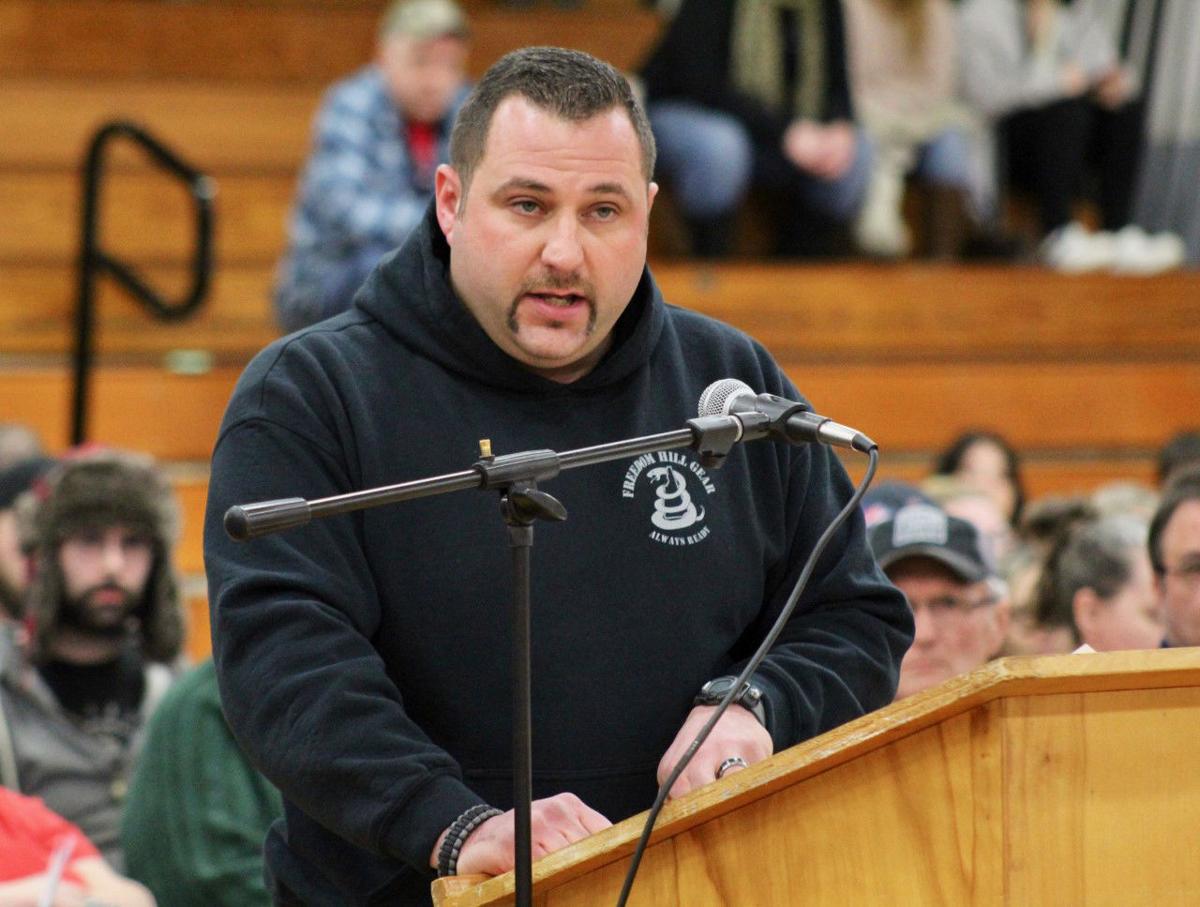 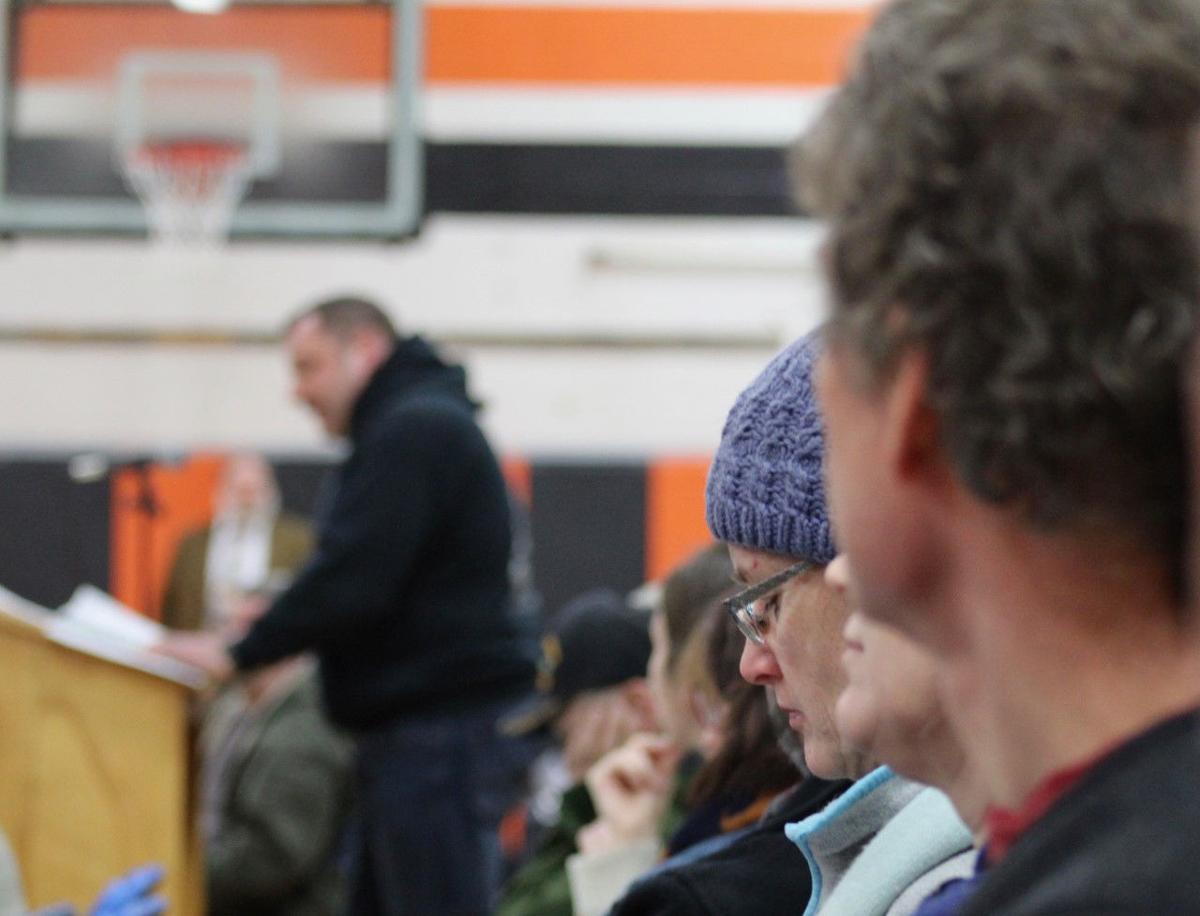 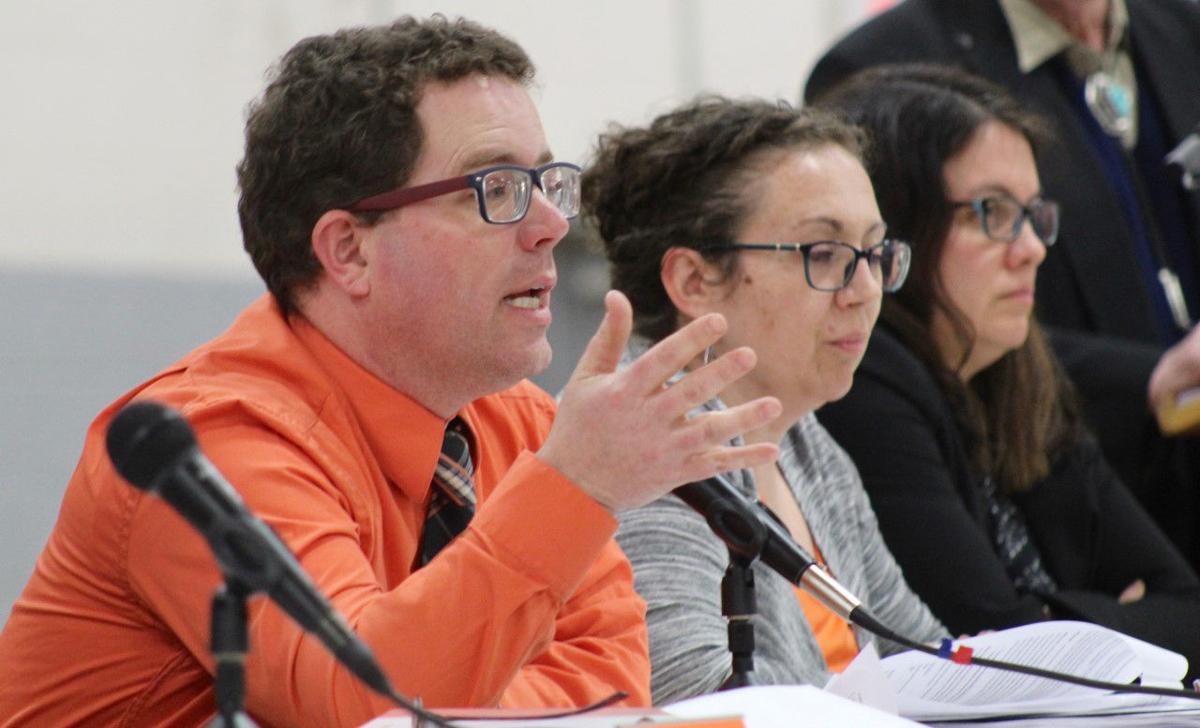 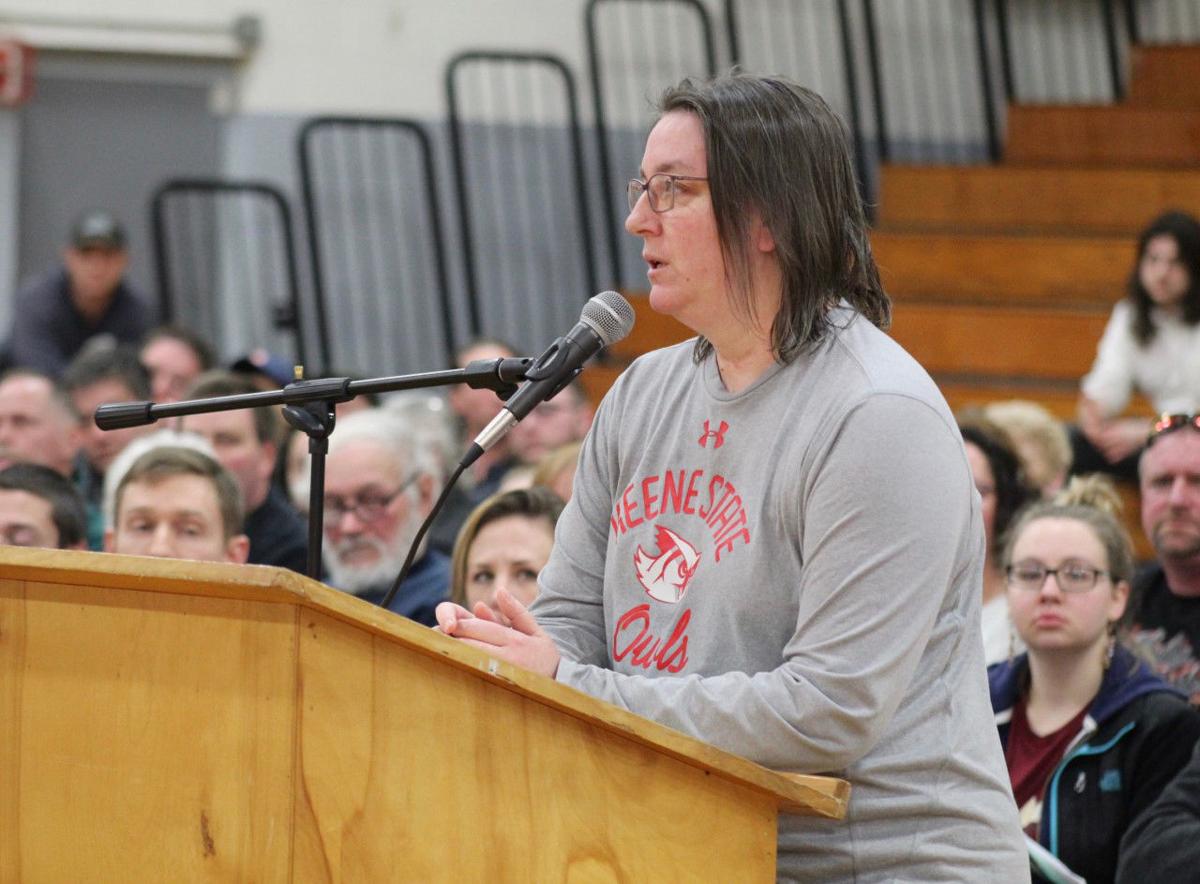 Heather Pelkey, a teacher at Winchester School, tells voters at the school district's annual deliberative session Thursday night that the proposed operating budget should not be cut.

Heather Pelkey, a teacher at Winchester School, tells voters at the school district's annual deliberative session Thursday night that the proposed operating budget should not be cut.

WINCHESTER — Thursday evening’s deliberative session for the Winchester School District brought in more voters than seen in recent years, followed by almost five hours of drama and a nearly $1.6 million cut to the budget proposal residents will consider in March.

Moderator Henry Parkhurst, who is also a state representative, noted the district ran out of the 120 previously printed voter cards and had to delay the meeting by 10 minutes to make more.

But having more voters than anticipated was just the beginning.

Of the 10 articles on the warrant, only four were read and discussed in full. Voters opted to send the others to the ballot as is, as residents grew tired of staying in the Winchester School’s gym for any more discussion past 11 p.m.

The most controversial article of the night was for the district’s proposed operating budget of $12,840,830, a sum the budget committee did not recommend.

Resident Tyke Frazier started the evening by moving to cut the proposal to $11,270,000 — about equal to the operating budget voters approved in 2017.

He argued the budget should be the same as it was three years ago, due to a lack of improvement in the district’s educational rankings since then.

“The tax people have invested, but we can’t see a return on the investment considering test scores in the district [are] being ranked nearly at the bottom of all statewide students,” Frazier said.

The impact on the town’s tax rate is also a concern, he added.

“... This could result in those with fixed incomes being forced to sell, refinance or the threat of a reverse mortgage just to float their tax bills,” he said.

Frazier’s amendment started a nearly two-hour debate among school board members and other voters.

“It hasn’t been a money problem because we keep throwing money in, and the results are worse ... I think it’s time to look out more of what’s going on,” he said.

Heather Pelkey, a 6th-grade teacher at Winchester School, said while she understands the struggle of paying taxes, the funding is necessary for the students.

“My first concern is the students. If we are to cut the budget by $1.5 million out of this budget, what is going to come out of this building [for] our preschool through 8th-grade students?” she said. “Parents and townspeople need to know what our students are going to lose, and that’s not going to help our test scores.”

These points were brought up multiple times by other voters, with a few clarification questions in between.

Following a petition for a ballot vote, the amendment passed, 99-72.

The default budget, which would go into effect if the budget proposal is defeated at the polls, is $12,770,574.

With less funding now in the operating budget proposal, school board member Kevin Bazan moved to amend the article asking for $75,000 for the building improvements capital reserve fund.

“This money is now very much needed because our budget was just cut by $1.5 million,” he argued.

Other discussion Thursday stemmed from confusion over the article asking for $550,000 for building and infrastructure improvements, to be fully funded through the state’s fiscal capacity disparity aid.

The district does not know yet whether it will receive this funding from the state, but school board Chairwoman Lindseigh Picard said district officials are confident they will get at least that much.

Picard explained that the article would have no impact on taxpayers. If the funding is not awarded, she said, the projects listed in the article will not be completed.

They include replacing the school gym’s roof and completing third-floor renovations of the former Thayer High School.

All other articles moved to the March ballot as is.

Residents will vote on the warrant and pick district officers on March 10 at Winchester Town Hall. The polls are open from 8 a.m. to 7 p.m.

WINCHESTER — The town’s school board says the Winchester School District will have to get rid of public kindergarten, athletic programs and st…