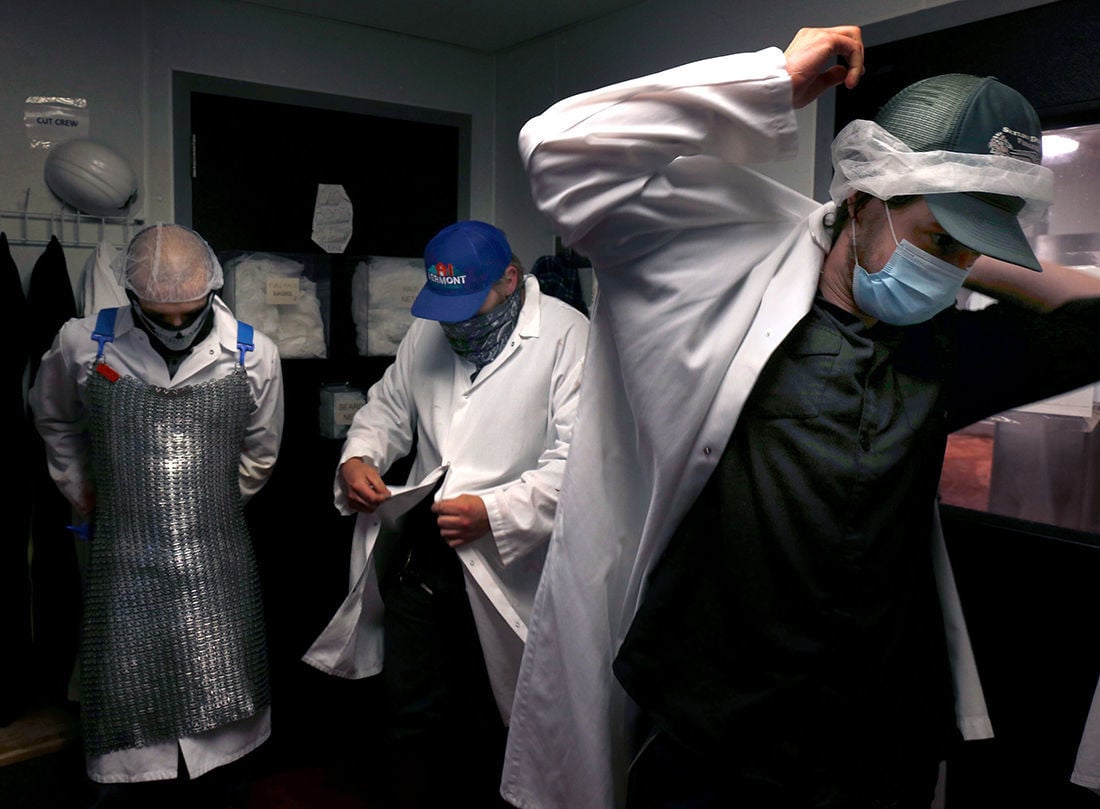 After taking a break for lunch, Chris Germond, left, Kam McIntyre and Will Mitchell suit up with others to work in the packaging room where meat is cut to customers' specifications at Vermont Packinghouse in North Springfield, Vt. 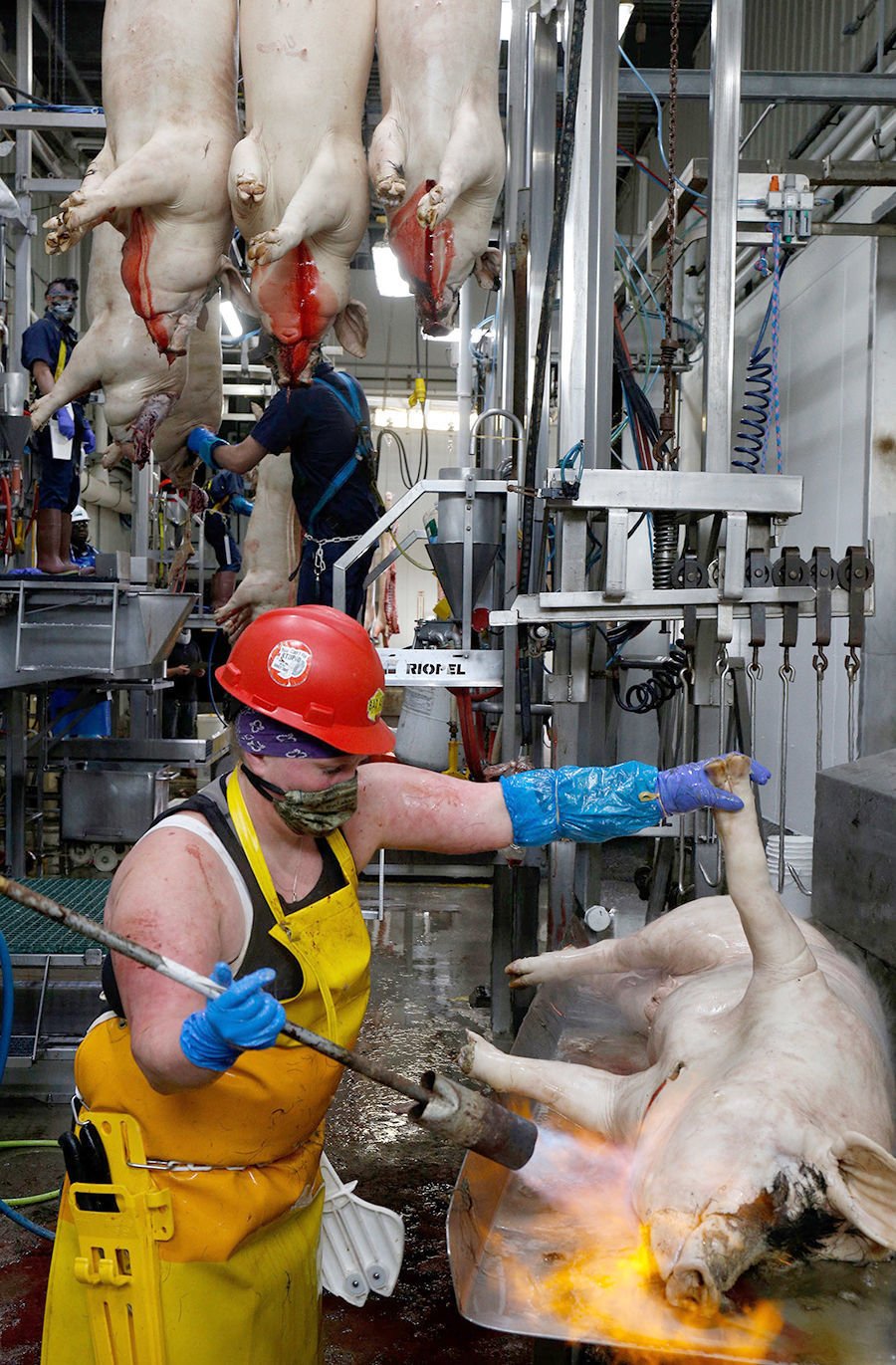 Kacey Knight singes the remaining hair from a pig slaughtered at Vermont Packinghouse in North Springfield, Vt., on May 19. Knight supervises an eight-man crew on the “kill floor” at the 30,000 square-foot meatpacking plant.

After taking a break for lunch, Chris Germond, left, Kam McIntyre and Will Mitchell suit up with others to work in the packaging room where meat is cut to customers' specifications at Vermont Packinghouse in North Springfield, Vt.

Kacey Knight singes the remaining hair from a pig slaughtered at Vermont Packinghouse in North Springfield, Vt., on May 19. Knight supervises an eight-man crew on the “kill floor” at the 30,000 square-foot meatpacking plant.

Kacey Knight says she typically hears two kinds of reactions from people when they learn she’s a supervisor on the “kill floor” at Vermont Packinghouse slaughterhouse in North Springfield, Vt.

Some people are surprised she has a job often thought of as men’s work (she oversees an eight-man crew). Others don’t want to know what goes on inside the 30,000-square-foot plant that slaughters cows and hogs and packages meat.

For the latter, Knight has a ready reply.

“I always say, ‘Where do you think your food comes from?’ ” Knight said.

With several of the country’s largest beef and pork processing facilities shut down after COVID-19 infections spread among plant workers, Knight’s question is more pertinent than ever. The demand for meat has skyrocketed during the coronavirus pandemic, as has a desire for food that is locally sourced and raised.

On May 15, Vermont Packinghouse set a record: 64 cattle were slaughtered in a single day. Normally, the tally averages about 50 per day. This month the plant is scheduling rare Saturday shifts to keep up.

(An industrial-scale meatpacking plant, such as Smithfield’s facility in Tar Heel, N.C., where 100 employees tested positive for COVID-19, will process 30,000 animals per day.)

The work on the Vermont Packinghouse kill floor — where it takes 45 minutes to an hour for a beef to go from being killed with a bolt gun, gutted, skinned, trimmed and cut in half before the sides are hung in refrigerated storage awaiting cutting and packaging — is physically taxing. Knight acknowledges it’s not for everyone and requires a certain “mind over matter” mettle.

“We just buckled down as a team,” Knight said. “They are pretty capable.”

At the same time, the consumer demand for meat and the need for slaughterhouses to accommodate the increased volume is making it difficult for Twin State farmers to get scheduled — which has to be done months in advance — to deliver their livestock to the plants for processing.

“We aren’t taking any more customers through the end of the year,” said Will Mitchell, interim general manager at Vermont Packinghouse. “We could be operating seven days a week and not get everything done.”

The price farmers pay for slaughtering and processing at Vermont Packinghouse averages about $500 per head of cattle and $250 per hog, although the cost can vary wildly depending on the animal’s weight, quantity processed, and cuts and packaging orders, according to Mitchell.

But the issue for many farmers these days isn’t the price; it’s getting in the door.

Slaughterhouses’ capacity crunch creates problems for farmers like John Lomanchinsky, owner of SpringMore Farm in Baltimore, Vt., which raises pork and poultry and sells at the farm for curbside pickup, at the Ludlow (Vt.) Farmers Market and through home delivery in the Woodstock area. His farm in southern Windsor County is only a couple miles from Vermont Packinghouse.

“I’ve been using them since the beginning, and I had six pigs I wanted to schedule for this summer. We usually bring them 40 to 50 per year. But when I called them they said they are not taking any more reservations for the year,” Lomanchinsky said.

Eventually he got on the schedule at Royal Butcher in Braintree, Vt., for both his small order this summer and the annual large one in the fall.

Leslie O’Hara, owner of Hogwash Farm in Norwich, said she also learned to her dismay that her regular slaughterhouse, PT Farm in North Haverhill, couldn’t book an extra day she needed this summer to get 27 hogs she would need processed “in the freezer by July” when she expects to have her hands full with the arrival of her second child in early August.

O’Hara sells pork and sausages at the Norwich Farmers Market, at her roadside stand and through her CSA subscription service.

“My tiny little stand is doing way more business than it ever has,” she said.

But, although O’Hara said PT Farm has “worked really hard to help a smallish producer like me, they are just swamped.” (PT Farm did accommodate other slaughtering dates in the summer and fall that O’Hara requested.)

Like SpringMore Farm, O’Hara was also able to get scheduled at Royal Butcher.

PT Farm owner Peter Roy said he had already been moving away from slaughtering livestock for outside customers but that he “accelerated” the shift as his farm’s own beef sales have tripled since the onset of the pandemic in March and he needs his slaughterhouse’s capacity for his own livestock.

“Unfortunately what we’ve had to do is put people who were in our system and take their name and say. ‘When this slows down we’ll figure it out,’ ” Roy said. “I’m telling them I can’t do it all right now. Let’s see where we are in a month.”

O’Hara’s and Lomanchinsky’s plight is familiar to Justin Sauerwein, owner of Almanack Farm in Chelsea, which sells its grass-fed beef to the Worthy Burger restaurants and Twin Farms resort in Barnard. Sauerwein acquired Royal Butcher in January from Royal Larocque, who retired after operating it since 2003.

“In March we started to see an increase in bookings and in April we were running at full capacity, which is double our normal volume,” Sauerwein said. “So we’ve been hiring.”

Sauerwein has added four employees at the slaughterhouse on top of the six he already employed. Before COVID-19, the Braintree slaughterhouse would process 15 to 20 head of cattle per week at this time of year but now is processing up to 50 head per week, he said.

“Most of our accounts are small farms who direct-market their products. There’s been at least a doubling or more in their sales. ... We’ve been able to take on some of the surplus that other plants can’t take because we had extra capacity,” he said.

Sauerwein said the increased demand is driven by a “renewed interest in local food” but also by people being unable to eat at restaurants.

There’s another reason as well: “Some people are stockpiling. Food security is an issue,” he said.

At Vermont Packinghouse, which prides itself on its reputation as a “humane” slaughterhouse by its treatment of livestock — an electrical cattle prod for an unruly animal is only rarely deployed, Mitchell said — there is the gratification that the “front-line” work they do provides an important service for both farmers and consumers.

Jeff Snide, who heads the seven-person packing department and was the fourth person hired at the North Springfield slaughterhouse when it opened in 2013, said the workload “has been a hectic and a little stressful, but we’re getting it done and getting it out the door.”

He describes himself as “exhausted and drained” after a shift, but it leaves him feeling good about what he does.

“It gives me a sense of pride that I am part of feeding America in a crisis,” Snide said.