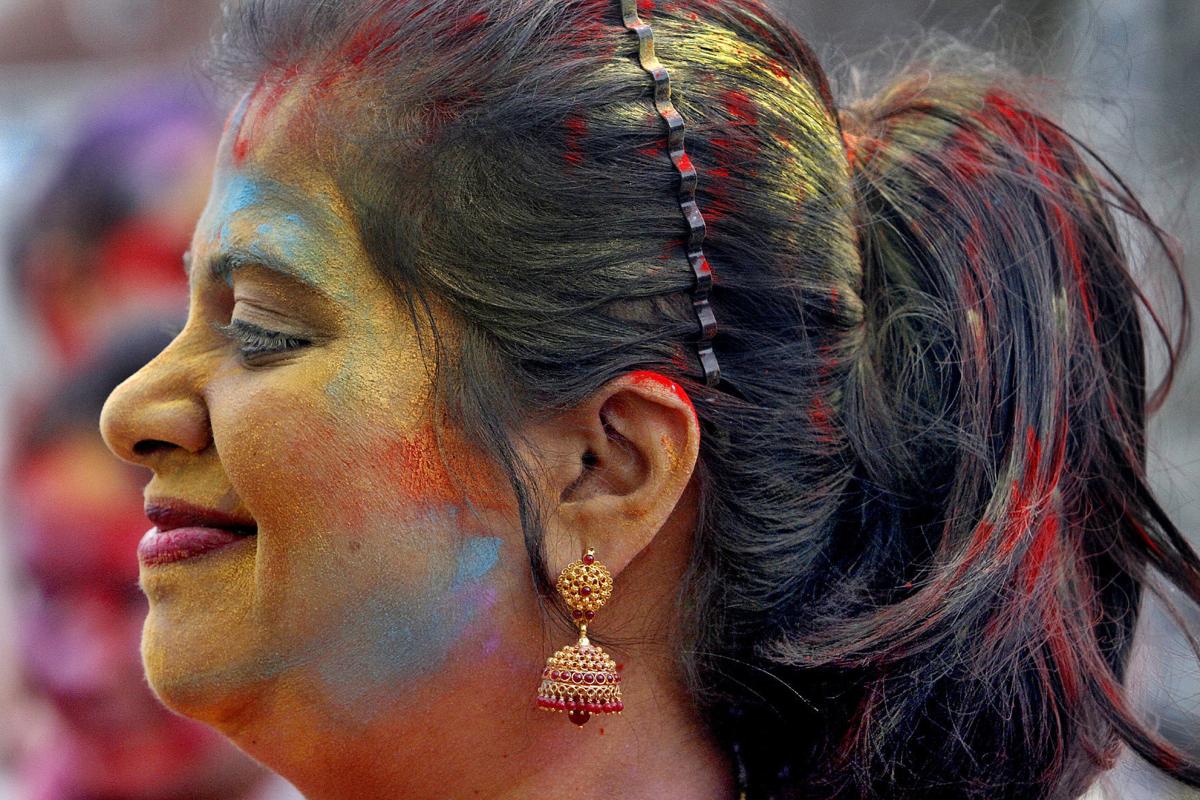 Ramya Dineshkumar of Keene is a rainbow of colors during the Holi Festival of Colors at the Historical Society of Cheshire County Saturday. 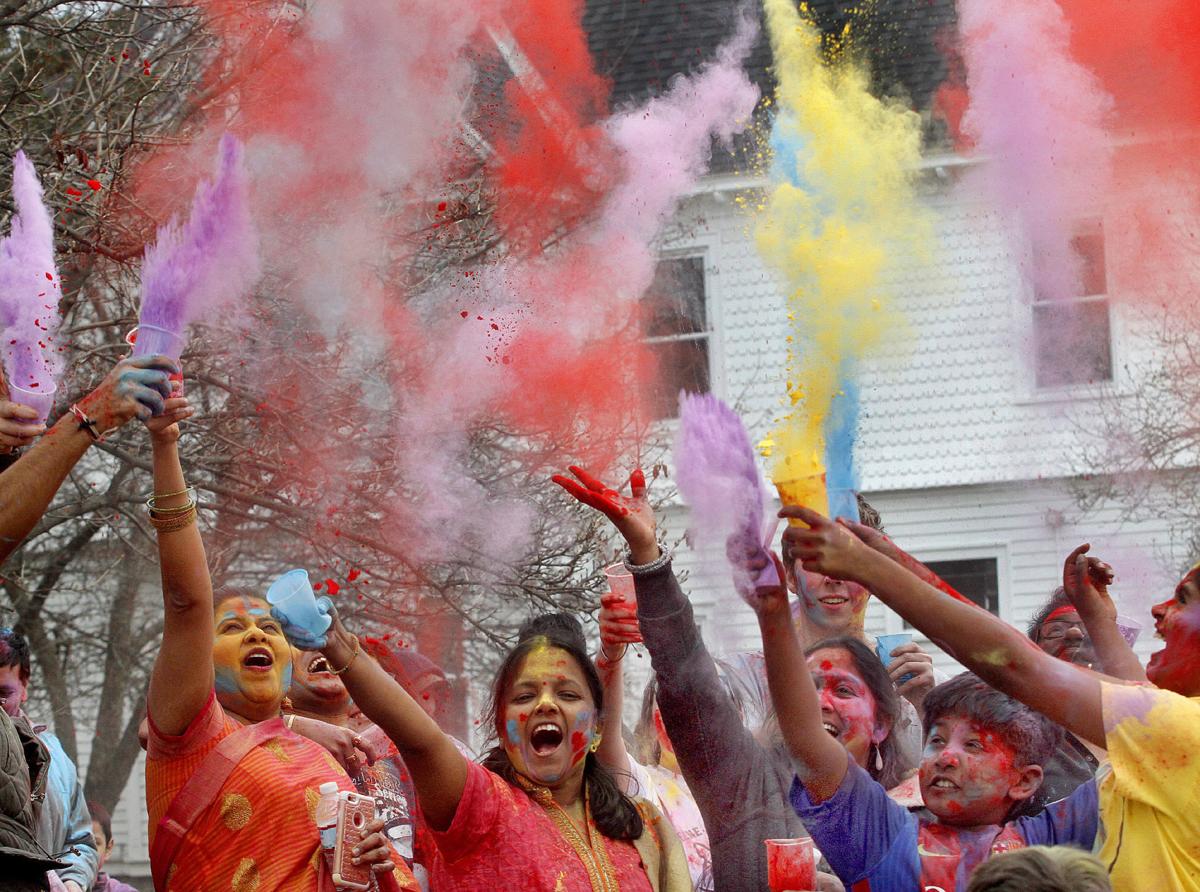 Colors fly during the Holi Festival of Colors at the Historical Society of Cheshire County Saturday. The Hindu festival celebrates the arrival of spring and victory of good over evil.

Ramya Dineshkumar of Keene is a rainbow of colors during the Holi Festival of Colors at the Historical Society of Cheshire County Saturday.

Colors fly during the Holi Festival of Colors at the Historical Society of Cheshire County Saturday. The Hindu festival celebrates the arrival of spring and victory of good over evil.

Crowded in a room at the Historical Society of Cheshire County Saturday were people of all ages, races and backgrounds.

Some were dressed in plain white T-shirts and jeans, preparing themselves for the bursts of color they would be showered with later in the afternoon, while others wore richly colored traditional Indian garb.

The crowd was there for the Holi Festival of Colors, an event in its second year at the historical society. It was co-sponsored by the Keene India Association, a group formed in December 2016 when members of the local Indian community decided to collaborate to encourage cultural exchange and community engagement, according to Ritu Budakoti, president of the association.

“Through one of the conversations, we found that everybody was doing something, but we were all doing it in isolation. So, we thought, you know, how about we combine our efforts of helping the community, sharing our culture and doing whatever we can,” Budakoti said.

Since its formation, the group has put on fundraisers to benefit The Community Kitchen in Keene, Hundred Nights cold weather shelter and the Keene Kids Collaborative, Budakoti said. Its members have also held celebrations for Indian holidays like India Republic Day and Indian Independence Day, and most recently the Diwali Festival, which was held in the fall.

The Holi event and others like it are part of an initiative to make the historical society a cultural heritage center, according to Jenna Carroll, the society’s director of education.

With the second annual Holi Festival this weekend, the Keene India Association may have seen one of its largest events yet. About 100 people showed up to the sold-out event Saturday afternoon.

The Holi Festival, also known as Holika or Phagwa, is celebrated in Hindu communities around the world. It falls in March each year and celebrates the coming of spring and the triumph of good over evil.

Part of the goal of hosting a Holi Festival locally is to preserve Indian heritage, Budatoki said.

“For our work, it’s (for) the Indian children who are living in America right now to be able to understand the story of Holi and their significance so they are close to their roots, at the same time using them as ambassadors for sharing their culture,” Budakoti said.

The children performed a short play Saturday telling the legend of Prahlada, an Indian prince whose father, King Hiranyakashyap, forbid his kingdom from worshiping anyone but him. But Prahlada was devoted to the god Lord Narayana and refused to worship his father. After the king failed in several attempts to kill his son, he asked his sister Holika to do the deed.

She lured Prahlada onto a burning pyre, where she was protected by a magical shawl. But the shawl suddenly flew from Holika to Prahlada, protecting him while she burned. The story serves as a reminder that good will triumph evil, and provides the origin for the Holi Festival’s name — in fact, effigies of the evil sister Holika are still burned in India today.

After the play, several local students of the Arya Dance Academy — an international dance organization specializing in South Asian dance — performed Bollywood-style dances for the crowd. Attendees even got a chance to join in on the celebration with the Dandiya, a traditional folk dance in which participants strike two short sticks together in a rhythmic cadence.

Then, after a meal of traditional Indian food made by members of the Keene India Association, it was time for the main event: the color throw. The seven colors used — red, orange, yellow, green, blue, indigo and violet — are the same colors of the seven Hindu chakras, or energy centers.

The colors have spiritual meaning, but they also represent a sense of “unity in diversity,” Budakoti said.

“It has now popularized in the western world, because color has no words, but you know, color kind of covers everybody. ... They are so vivid, vibrant, diverse, yet when they’re all together, it’s very beautiful,” Budakoti said, “and I think it’s a bigger message through Holi that actually we would like to share so we can make our communities, not only in Keene but in the world, much stronger.”

Events like the Holi Festival are a testament to the diversity of Keene, Budakoti and Carroll said. Both cited the upcoming Keene International Festival, slated for September, where 26 different countries will be represented, according to Budakoti. That will be another opportunity for local people of different origins to share their cultures, she said.

“I personally don’t think that there is any scarcity of cultural diversity in Keene. However, the problem that I see is with the connection, the links,” Budakoti said. “... And so things like this, what we would say is we are happy and open to share our culture with others, and at the same time we are happy and open to learn other people’s culture as well.”

To learn more about the Keene India Association, visit the group’s Facebook page.

Note: This article has been updated to correct a typo in the number of Hindu chakras and clarify that the Keene India Association put on the Diwali Festival independently.