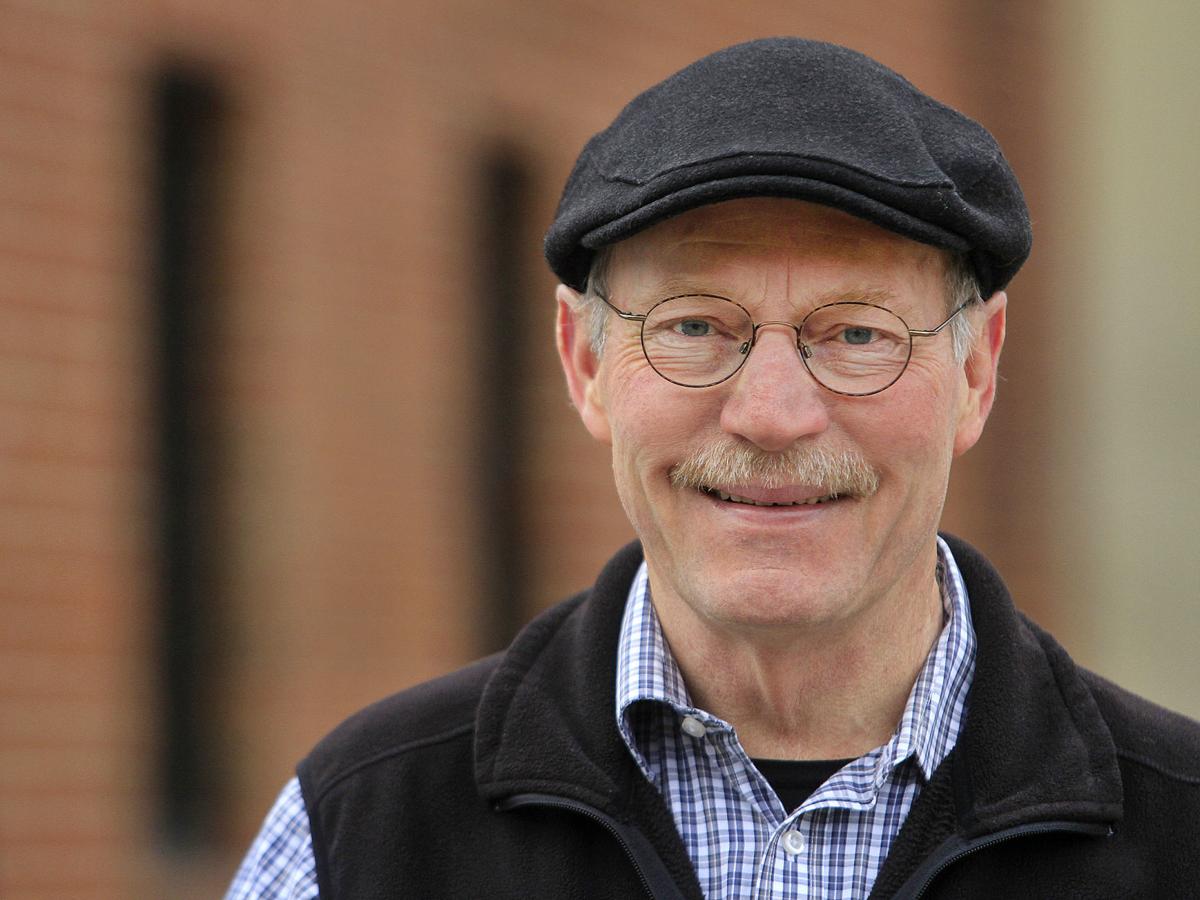 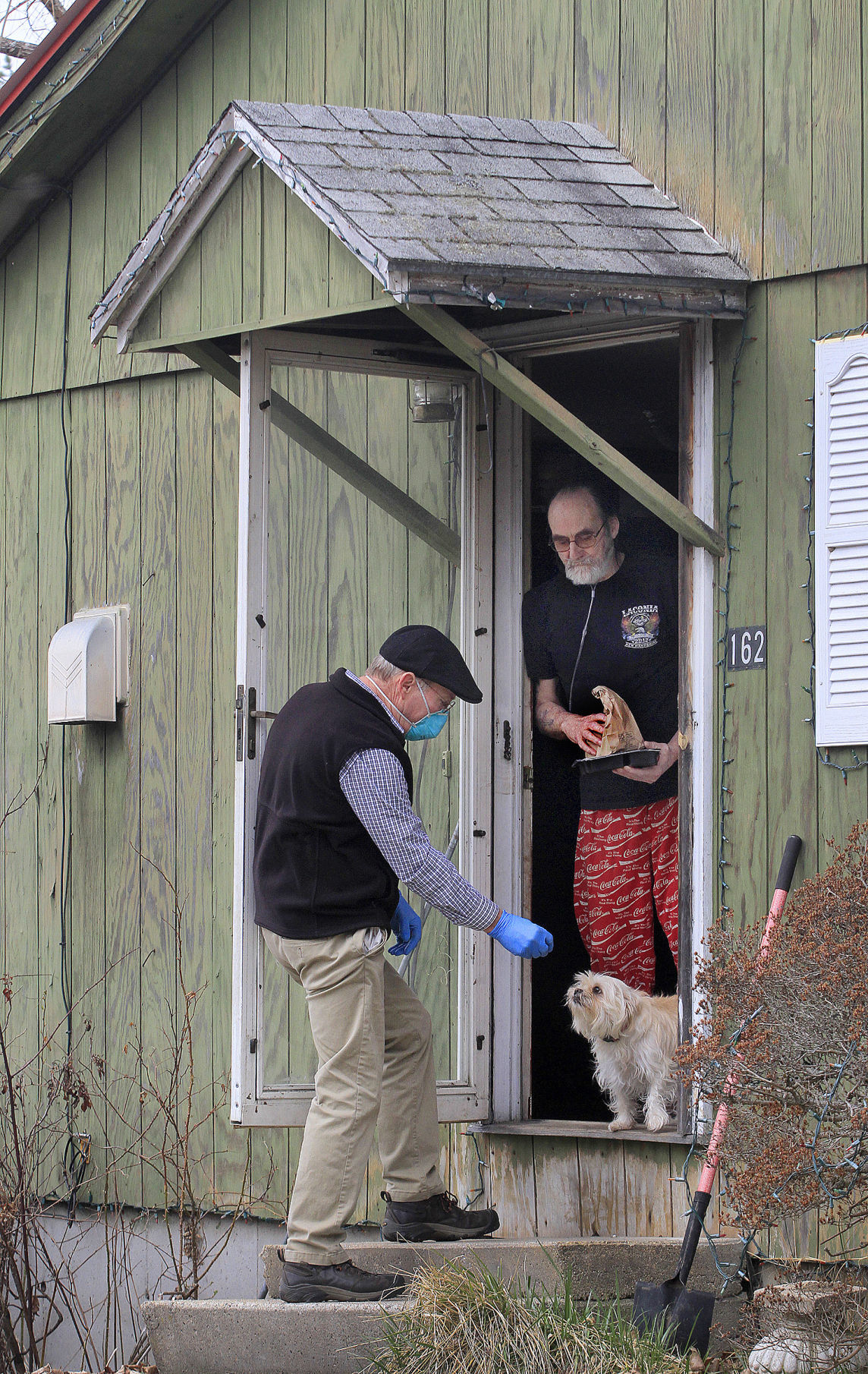 David Harlow of East Swanzey delivers a Meals on Wheels lunch and a treat to Phil Russell and his dog Koda Thursday in Winchester.

David Harlow of East Swanzey delivers a Meals on Wheels lunch and a treat to Phil Russell and his dog Koda Thursday in Winchester.

“Even if I have to wear a space suit, I will do this. It means that much to me.”

That’s what David Harlow, a Meals on Wheels delivery driver, said he told his supervisor amid spiking concerns about the spread of COVID-19, the disease that has brought much of the world to a halt and prompted people around the globe to hunker down in their homes.

To make sure his clients continue to get the meals they depend on, while also minimizing their chances of being exposed to the virus, Harlow, a 67-year-old East Swanzey resident, has taken to wearing gloves and an N95 mask while on the job. He keeps bleach wipes in his truck and said his hands are raw from all the washing and hand sanitizer.

But it’s all to protect both himself and the people he delivers to, many of whom are seniors and are likely to be at an elevated risk of severe complications if they contract the novel coronavirus disease. They’re people Harlow, who has been delivering meals for 3½ years, said have become his friends.

A graduate of Minnechaug Regional High School in Wilbraham, Mass., Harlow took some college classes after high school, but decided instead to focus on his career. For the majority of his long tenure as a construction worker, he was with Thomas Drilling and Blasting in Spofford, where he was employed for 37 years.

Harlow got his start delivering for Meals on Wheels after leaving the construction business in 2016. He made that call for a number of reasons — chief among them the fact that he needed a double knee replacement.

But he wasn’t ready to fully retire quite yet.

After recovering from his surgery, he learned that Home Healthcare, Hospice and Community Services had an opening for a Meals on Wheels driver. He originally intended to do that job temporarily while waiting for a position to open up as a driver for the organization’s City Express buses, which he was qualified for since he’d obtained a commercial driver’s license when he was working in construction.

But after three weeks driving for Meals on Wheels, he realized he wasn’t interested in the bus driver job anymore. “I fell in love with this job ... and never looked back,” he said.

Meals on Wheels brings food to seniors who are unable to either prepare their own meals or drive to the grocery store. The program is offered in 5,000 communities across the U.S., according to the Meals on Wheels website.

Five days a week, Harlow brings hot meals to the 57 people on his route.

He starts around 10 a.m. at the Home Healthcare, Hospice and Community Services facility at 312 Marlborough St. in Keene, where he loads his truck, which can hold up to 200 meals, before hitting the road to complete his route, which usually takes him until about 1 p.m.

Meals are prepared in Rutland, Vt., and brought down to Keene the day before, where they’re stored in a cooler and heated to temperature in the morning. They’re then placed in an oven in the truck Harlow drives, so they’re warm when they arrive at their destinations. Each meal also comes with milk, bread and a dessert.

Harlow said he first delivers about 50 of the meals to other drivers in Hinsdale, who handle smaller routes and deliver out of their own vehicles. Harlow then begins his own route with a few deliveries in the Hinsdale area, then makes his way east along Route 119 to Winchester, and then north on Route 10 to finish in West Swanzey.

Over the past few years, he said, the number of stops on his route has fluctuated, dipping as low as 36 and rising as high as 60.

“People come on and off the program for different reasons,” Harlow explained. “A lot of these people are rehabbing [from] a medical procedure and can’t get around. There’s many reasons that people come and go, and unfortunately the reason that some people go is because they’re gone. That’s part of the job that I’ll never get used to.”

More than a meal

Normally, Harlow would spend a couple of minutes chatting with the folks on his route about the weather or the news. But now some of them have asked that he leave their meals at their doors so they can come and get them once he leaves.

Others still welcome him inside, but now they’re practicing social distancing. He says he might leave the meal on the table, or hand it to them with an outstretched arm in an effort to preserve the space between them.

Harlow said his biggest fear is accidentally bringing the disease into one of the homes, so he’s doing everything he can, and following all the guidelines, to make sure that doesn’t happen.

Despite the stress and uncertainty, he said his clients are handling the unusual situation well enough, but many are concerned about what’s going on in the world and often ask him what news he’s heard about the spreading illness.

“They’re more curious than anything,” he said. “They watch a lot more news, I’ve noticed that lately. But because the age group is most vulnerable, they have a bigger stake in this.”

Harlow said that many of his clients seem to be in good spirits. Some of those who are old enough to remember World War II like to joke that they’ve lived through scarier times. But like everyone else, his clients are anxiously awaiting the end of the outbreak.

Harlow himself is in the age range considered to be at a higher risk of serious complications if he contracts the virus, and most of his clients are at an even higher risk. But he said he knows how crucial his job is to ensuring the health of meal recipients.

And the job goes beyond simply dropping off some food. Harlow knows he offers a sense of companionship to his clients, who often don’t see anyone else on an average day.

He said he’s been more than happy to go the extra mile during a time when most parts of life have become more difficult. He knows it’s important not only to make sure his clients get their meals, but also to do what he can to put a smile on their faces.

He plans to keep doing the job as long as he’s able.

At a glance: David Harlow