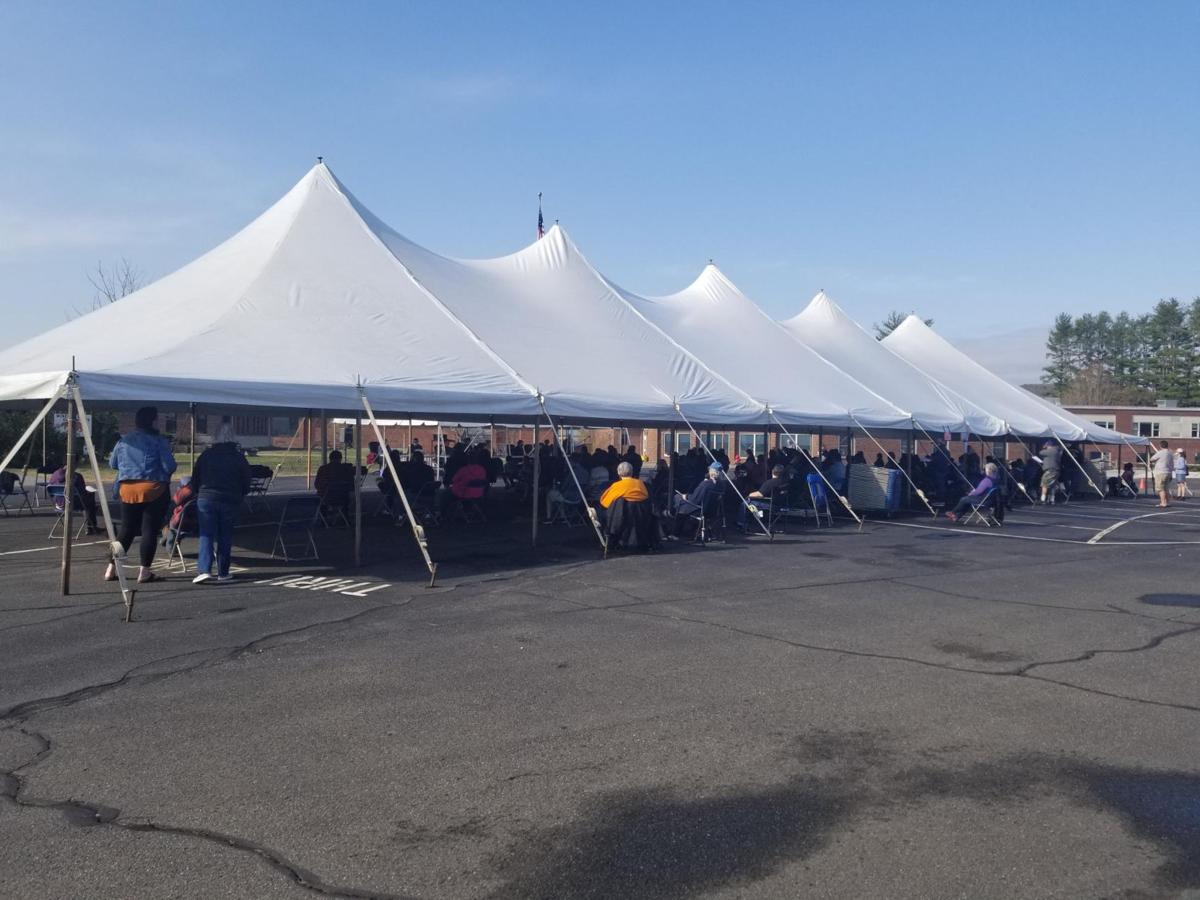 Roughly 100 Winchester residents gathered Saturday morning under a tent in the Winchester School parking lot for the district’s annual deliberative session, where voters moved the entire warrant to the May ballot with only minimal typographical changes. 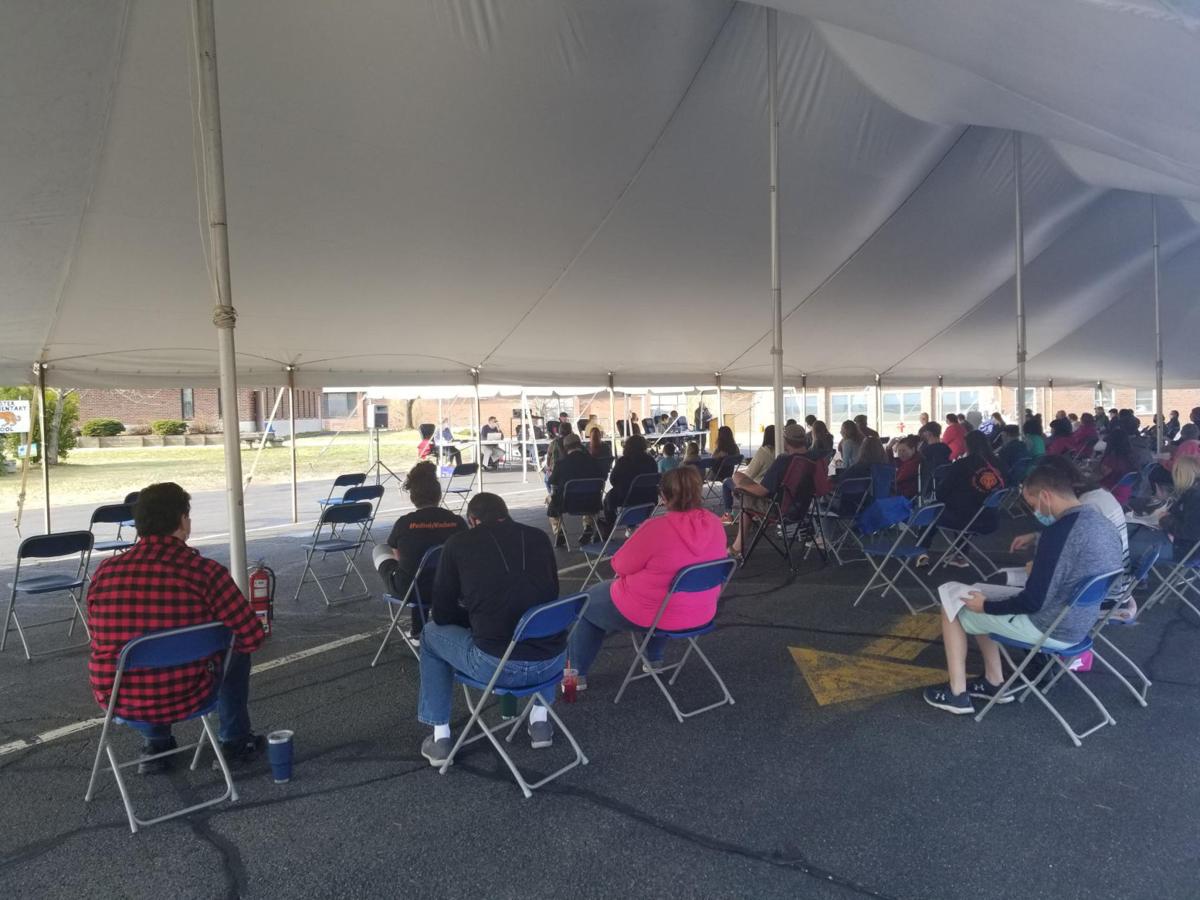 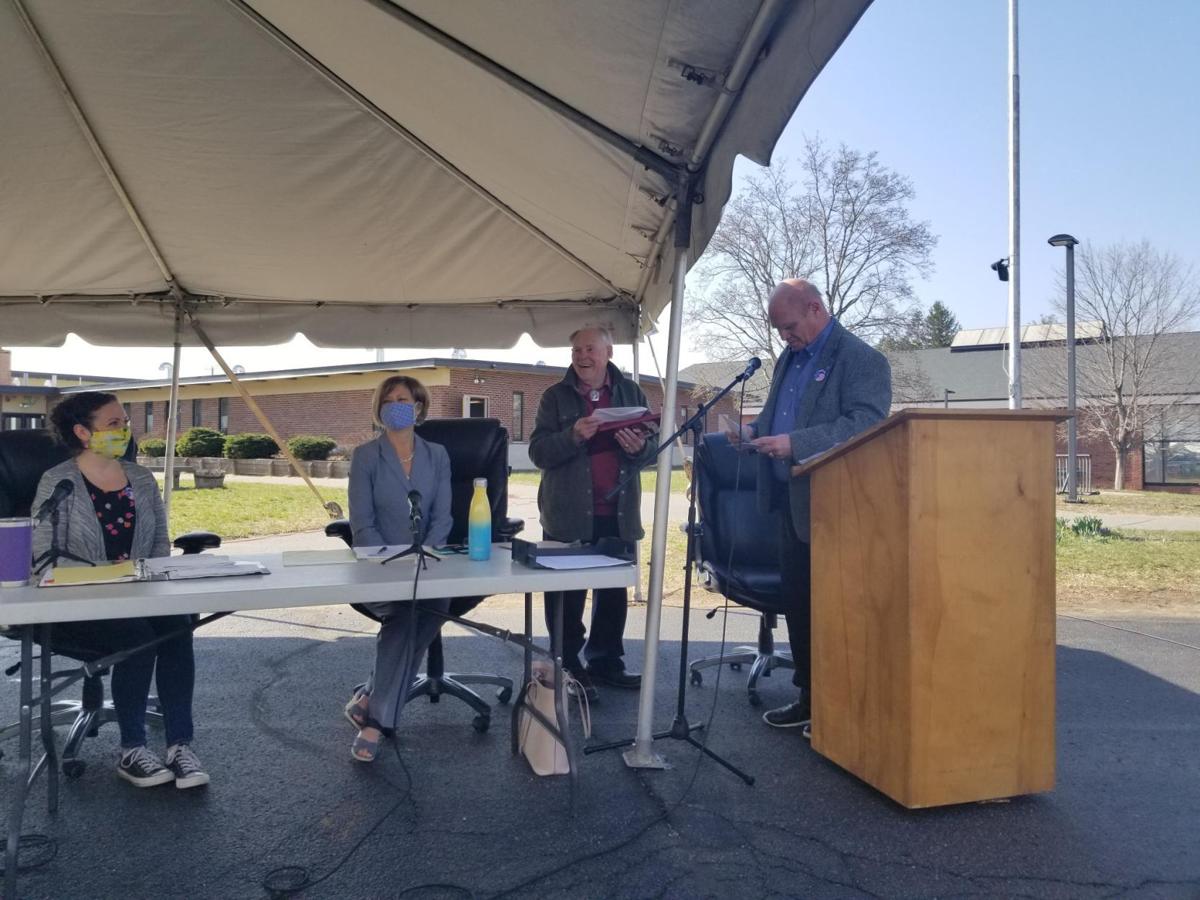 Roughly 100 Winchester residents gathered Saturday morning under a tent in the Winchester School parking lot for the district’s annual deliberative session, where voters moved the entire warrant to the May ballot with only minimal typographical changes.

WINCHESTER — Roughly 100 voters gathered under a large tent in the Winchester School parking lot Saturday for the district’s annual deliberative session, and at times the meeting matched the energy and enthusiasm of a circus performance.

Resounding applause broke out, for instance, when residents sent the district’s $12.4 million budget proposal to the May ballot with no changes. The article passed by voice vote, with only a smattering of nays.

The proposed budget restores most of the nearly $1.6 million that voters trimmed from the budget at last year’s deliberative session, and subsequently passed at the polls that March. This prompted major cuts, including transportation for students to and from Keene High School, all athletic programs and 23 staff positions.

But, school board Chairwoman Lindseigh Picard said Saturday, this year’s budget proposal restores athletics and high school transportation, along with eight jobs. That includes bringing back three of the nine teaching positions that were cut last year, four of the nine paraprofessional jobs, and one custodial job out of the 1½ previously eliminated positions.

“So, we just wanted the public to be aware that the two committees worked very hard to come to a middle agreement on some of the most important things that had been reduced from our budget last year,” Picard said, adding that both the school board and budget committee unanimously recommended the budget proposal.

Voters will get the final say on the budget, and the rest of the warrant, at the polls onMay 11, when voting will take place at Winchester School from 8 a.m. to 7 p.m. If voters reject the budget proposal, a default budget of $11,610,865 will take effect.

Aside from the budget proposal, voters on Saturday sent the rest of the warrant to the ballot with only minor typographical changes during the roughly hour-long meeting, which was postponed from January due to the COVID-19 pandemic. The article that generated the most discussion involves a request to raise $400,000 to help eliminate a $745,402 deficit, which the district confirmed last fall.

The deficit developed over the past eight years because the district did not conduct annual financial audits between 2012 and 2016, Picard said. In response to a question from town resident Jim Wallace, Picard noted that this occurred before any sitting school board members or district administrators were in their current roles.

Picard added that the deficit is not the result of the district over-spending its budget. Rather, she said, the lack of audits caused the district to overestimate the amount of money it had not spent in the budget at the end of those years, and return more than it should have to residents in the form of reduced tax rates the following years.

Wallace criticized the district’s prior lack of audits, and the impact the deficit has on taxpayers now.

“The problem is the RSA [section requiring school districts to conduct audits] wasn’t followed. No audit was done, and now as a result we’re behind [nearly] $750,000 over the course of a number of years,” he said. “... It’s pretty disheartening as a taxpayer.”

In addition to the $400,000 warrant article, the district plans to use $125,000 from the district’s Special Education Expendable Trust Fund to help pay down the deficit, after the school board voted in January to transfer that money from the trust fund. District officials anticipate being able to make up the remaining $220,402 using excess funds at the end of next fiscal year.

If voters do not approve the $400,000 warrant article, the district will not be able to use any end-of-year surpluses to lower the tax rate until the deficit is eliminated, Picard has said.

Theresa Sepe, the lone Winchester Budget Committee member who did not recommend the deficit article, said she’s opposed to it because she thinks it will lead to an unreasonable property tax burden for residents.

“As a budget committee member, I have to make a determination and take everything into account as to the taxes that people are going to be faced with,” she said.

After the meeting, Picard said she was glad that the budget, deficit article and a two-year contract proposal with the Winchester Teachers’ Association moved to the ballot unchanged.

“All of those things are needed, and we’re excited to move forward,” she said.

The proposed collective bargaining agreement with the Winchester Teachers’ Association includes wage and benefit increases estimated at $64,118 in 2021-22 and $63,903 for the following year. Additional articles ask voters whether to add up to $25,000 to the district’s expendable trust fund for special education from any unreserved fund balance available at the end of the year, and raise $125,000 for the district’s building improvements capital reserve fund.

Voters next month also will select school district officers. In the only contested race, four candidates are vying for two seats on the Winchester School Board. Picard is running for re-election, and Aaron Bittner, Lindsey Hildreth and Autumn Laraba are also seeking three-year terms on the board.

One familiar name won’t be on the ballot, though. After 23 years as district moderator, Henry A.L. Parkhurst, a retired public school teacher and longtime former state representative who also serves as Mr. Pickle, the mascot of the annual Winchester Pickle Festival, is not seeking another term.

At the end of Saturday’s deliberative session, Winchester Town Moderator Denis Murphy presented Parkhurst with a commemorative gavel, and several gift certificates, to thank him for his service.

“The one thing I was hoping you would give me would be a new knee,” Parkhurst said, drawing laughs and cheers from the crowd as the meeting wrapped up.