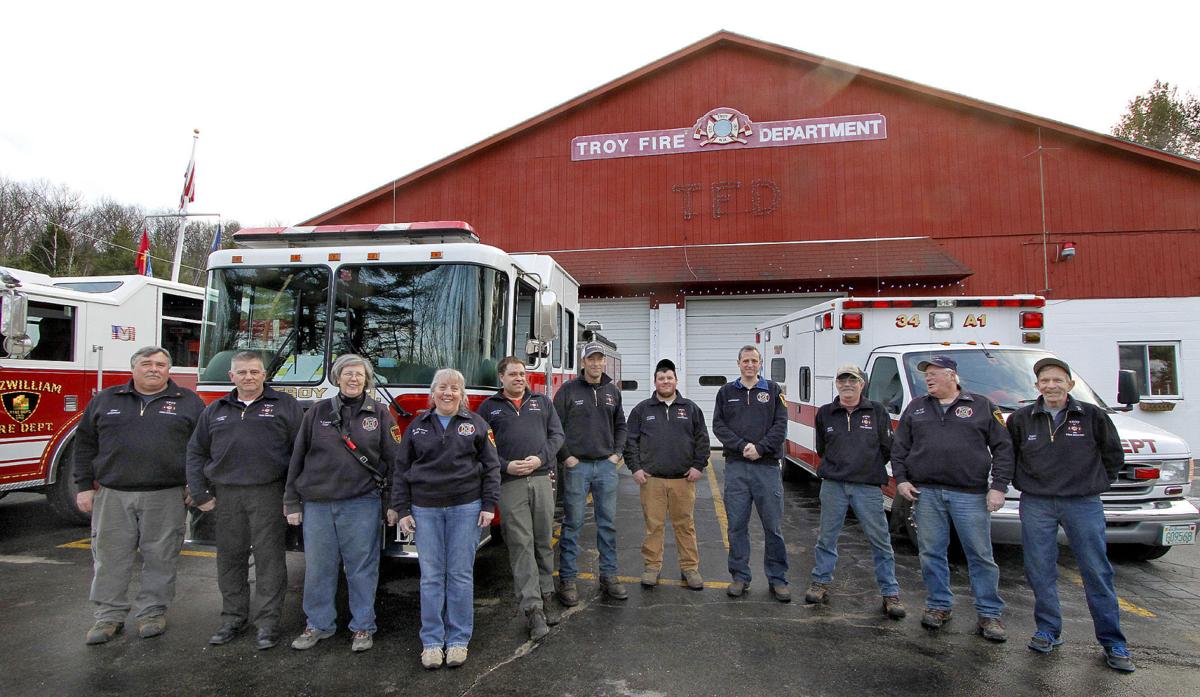 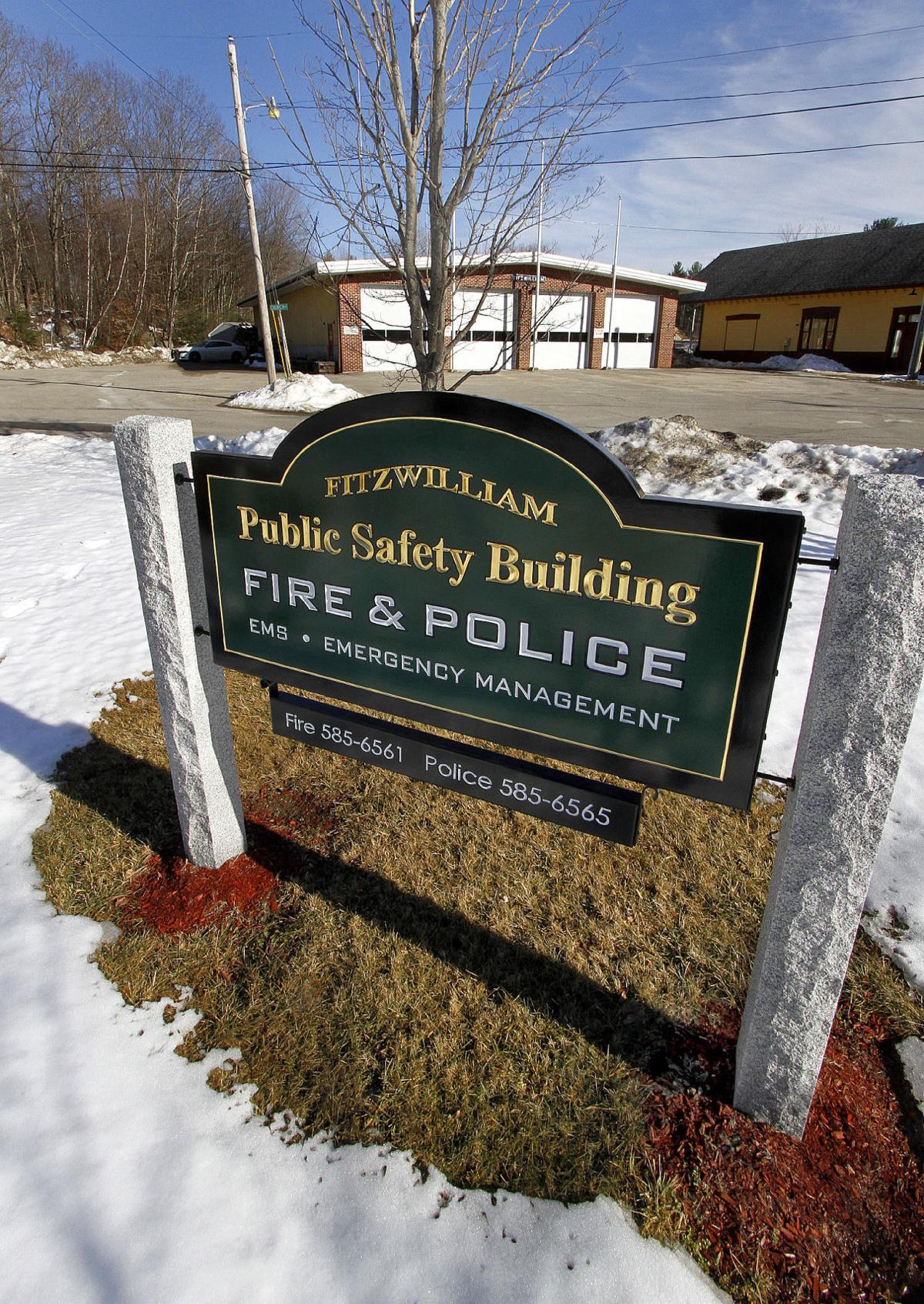 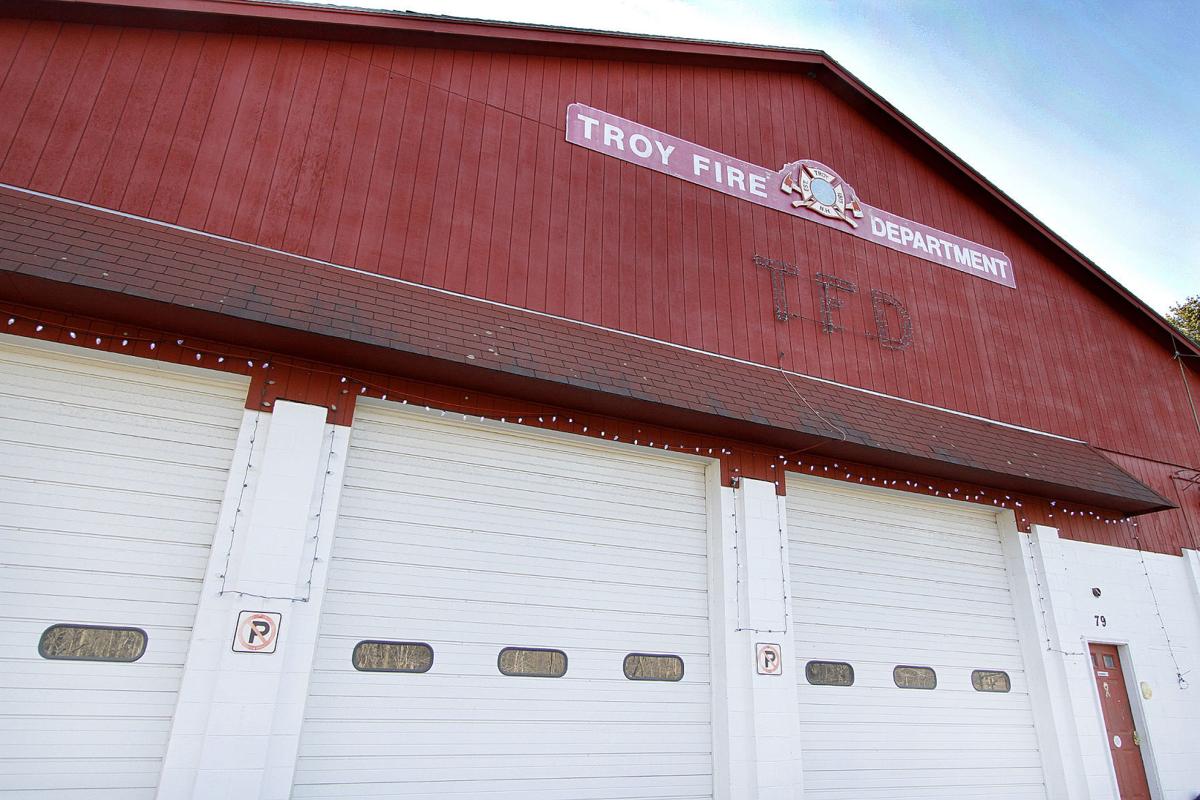 Even before taking on the town’s ambulance operations last spring, the Troy Fire Department was a first-response agency. The department has 25 members, about six of whom are cross-trained in firefighting and emergency medical care, according to Fire Chief Mark D. Huntoon.

Even before taking on the town’s ambulance operations last spring, the Troy Fire Department was a first-response agency. The department has 25 members, about six of whom are cross-trained in firefighting and emergency medical care, according to Fire Chief Mark D. Huntoon.

Where there’s a Troy firefighter or emergency medical technician, one from Fitzwilliam is probably close by, and vice versa.

That’s the way it’s been for years between the two towns’ fire departments.

Troy and Fitzwilliam share a border and have similarly sized populations. Their fire departments often train together, both have paid on-call staffs and each has one ambulance. They even share several personnel.

Their main fire stations are about 4½ miles apart, and when the Troy Fire Department had to take on operation of its town’s ambulance service last year, Fitzwilliam fire and EMS officials were there to help.

The Fitzwilliam Fire Department has run its own ambulance service since 1995.

Until May of last year, Troy Ambulance Inc., a nonprofit organization, had been the town’s ambulance service for decades.

But even though Fitzwilliam and Troy fire departments work together, they still face a problem plaguing fire and emergency medical agencies in this area and beyond: having enough people to respond to calls.

Several towns in the Monadnock Region and southeastern Vermont rely on on-call personnel and volunteers to respond to emergency medical and fire calls.

But assembling crews for those calls has been getting harder, according to area fire and EMS officials, who say they’re especially concerned about getting people out to emergency medical calls.

The situation is reaching a breaking point, they say, that could leave patients waiting longer for help to arrive and communities without coverage.

So, as Fitzwilliam and Troy fire officials have done many times before, they collaborated and came up with a solution.

For every fire call to either Fitzwilliam or Troy, both departments go at once, instead of waiting for one to determine whether it needs assistance from the other.

And for the most severe emergency medical calls — “echo” or “delta” — the ambulance and rescue crew of the town where the call originated is called first, along with advanced life support from R.J. DiLuzio Ambulance Service Inc. in Keene. If more first responders are needed to help, then that town’s ambulance and rescue crew are called again, as well as personnel from the other town’s department.

Before the changes were put in place, each agency was pretty much on its own unless there was a need for the other department to respond with mutual aid, such as for a multiple-alarm fire, or to provide specific equipment to help with incidents such as car crashes or wilderness rescues.

Mutual aid is when fire departments help one another during an emergency at no cost. It’s expected that the department providing the assistance will someday be on the receiving end.

Now, there’s no delay in alerting the other agency to incidents such as chimney fires, crashes and small brush fires, which could become more serious, said Fitzwilliam Fire Chief Nancy W. Carney, who is also a Troy Fire captain.

The automatic response for fire calls, and secondary response for severe EMS calls, began about a year and a half ago. And so far, the arrangement’s working, Carney and Troy Fire Chief Mark D. Huntoon say.

Huntoon described finding enough manpower to respond to calls as “hit or miss.”

“Sometimes you can have all the people in the world there, and other days you’re scrambling to get four guys,” he explained.

The difference now is a larger pool of people is paged immediately or soon after, which ups the odds of getting enough responders, quickly, to an incident, he said.

“We’re fortunate enough that we have people who work in town who can respond during the day. But sometimes they can’t, or we have an incident where we need more people,” he said.

Fitzwilliam faces the same problem, according to Carney.

“What this does is it gets at least a crew coming,” she said. “It’s getting calls filled.”

The Fitzwilliam Fire Department has 24 members, with about 15 cross-trained in firefighting and emergency medical care, she said.

The Troy Fire Department has 25 members, about six of whom are cross-trained, according to Huntoon.

Neither town charges the other to answer automatic response calls, and the number is about equal between the departments, Huntoon said.

Fitzwilliam had 21 automatic responses to Troy last year, according to Carney.

While he didn’t have the exact figures, the number was about the same for Troy going to Fitzwilliam, Huntoon said.

As part of the plan, each department tries to get someone to an incident quickly to determine if it’s something that can be handled by one agency, he said. If so, members with the other department are told they don’t need to respond or to remain at their station.

Last spring, a series of events led the Troy Fire Department to become the main provider of ambulance service to the town.

The court case is pending.

At the same time, selectmen directed the town’s fire department to run the community’s ambulance service.

Carney and others who help run Fitzwiliam’s ambulance service helped Troy get its own up and running, Huntoon said.

Even before taking on the town’s ambulance operations, the Troy Fire Department was a first-response agency. This means it had personnel trained in some level of emergency medical response.

Both departments have had quarterly fire training together for years, along with the Richmond and Royalston, Mass., fire departments.

And for at least the past three years, Fitzwilliam and Troy have held EMS training together and stocked their ambulances with similar equipment and in similar fashion, Huntoon said.

“That way we can work on each other’s ambulances and not delay a patient’s care because something that is in one place on one ambulance is in another place on the other,” he explained.

In 2015, emergency medical responders from the Troy Fire Department went to 35 medical calls, which was about 15 percent of the department’s 229 emergency calls that year.

The next year, emergency medical responders from Troy went to 101 medical calls, about 39 percent of the department’s 260 emergency calls that year.

Most of that increase has to do with the fire department operating the town’s ambulance service, Huntoon said.

Meanwhile, the number of emergency medical calls Fitzwilliam fire personnel have responded to since 2011 has increased about 40 percent, with the lowest number of calls being 113 in 2012 and the highest being 158 in 2015.

Carney and Huntoon said they know their departments’ automatic response arrangement isn’t a fool-proof solution to the staffing issues and other struggles their agencies face.

Going forward, Carney said she can see the Fitzwilliam and Troy fire departments working more with their counterparts in the area when it comes to training.

“We’re not trying to regionalize, but we’d like there to be more training between departments so there is a smoother transition on calls,” she said. “When you train together and spend time together, you work as a well-oiled machine.”

She can also see Fitzwilliam and Troy having one ambulance between the two towns, but said this would be far into the future.

It would also depend on what the towns’ officials and residents want to do, she said.

Such an arrangement worked in the 1970s and 1980s, but the emergency medical calls were much different and less involved back then, she said.

“Honestly, I know everyone in EMS is stretched thin. I think maybe more regionalization of EMS and fire services might be a possibility down the road, but I don’t know. It’s all an unknown,” she said.

Carney said she’d like to see Cheshire Medical Center/Dartmouth-Hitchcock Keene help create a mobile integrated health care program. Such a program would involve EMTs regularly providing basic care to people who had recently been discharged from a hospital or have chronic health problems, to try to prevent subsequent hospital visits.

“I believe this is something the region will benefit from, but, we, as individual departments, can’t do it alone,” Carney said.

In the meantime, both she and Huntoon believe the reliance on the region’s mutual aid system will increase. The system has traditionally dispatched ambulance services as part of its fire dispatching operations, but doesn’t have agreements that require ambulance agencies to respond.

“It’s how we are here,” Carney said. “If someone calls us and needs help, there is no such thing as a town or state line.”

Area fire, EMS officials begin to search for a solution to strained system