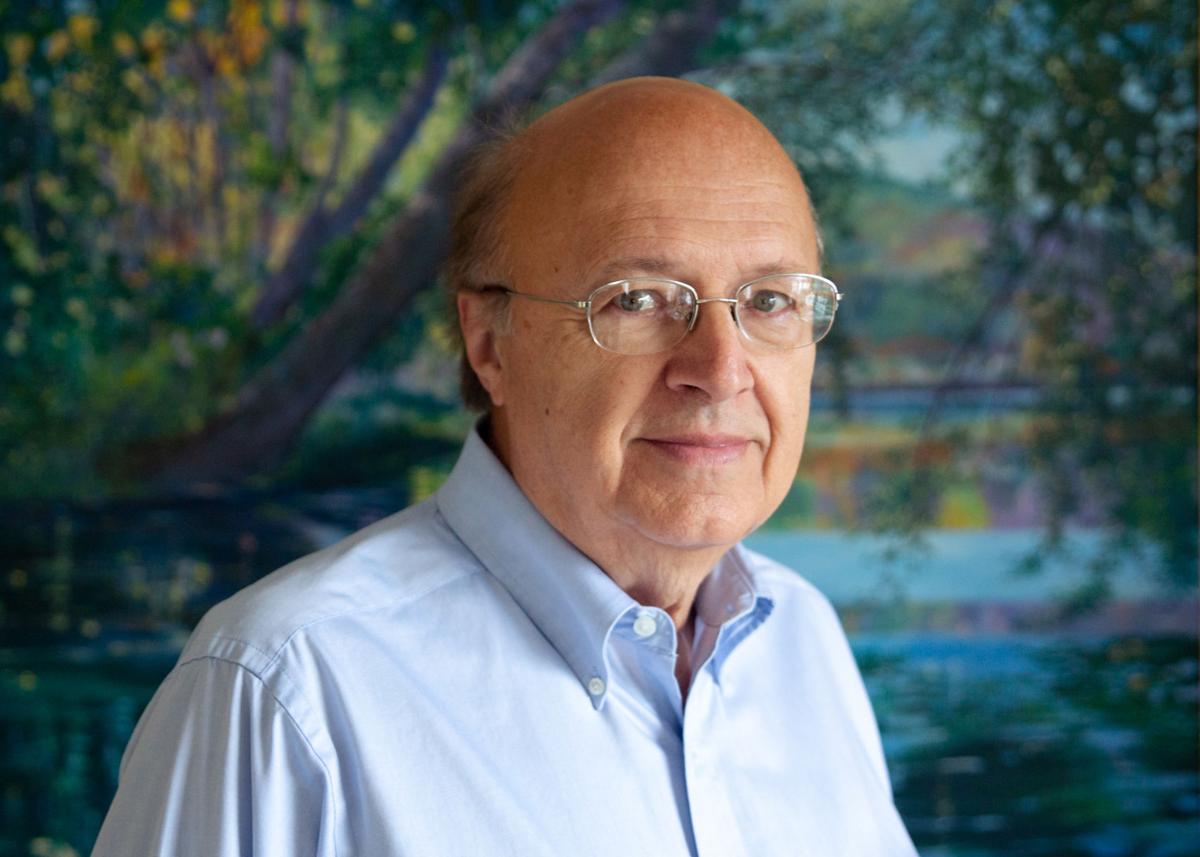 Tony Tremblay in the family room of his home, where Jonathan Daniels grew up, on Thursday in Keene. Behind him is the painting “Quiet Waters” by his father, Arthur Tremblay. 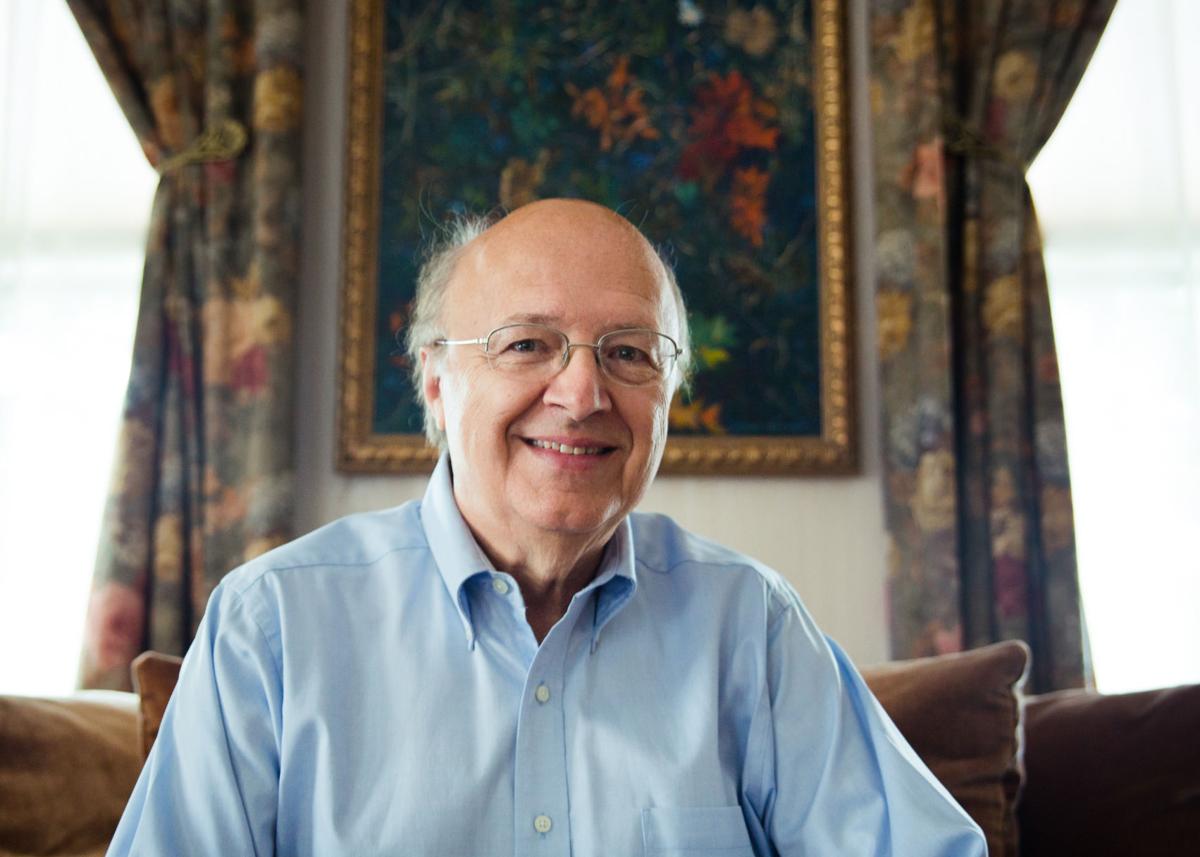 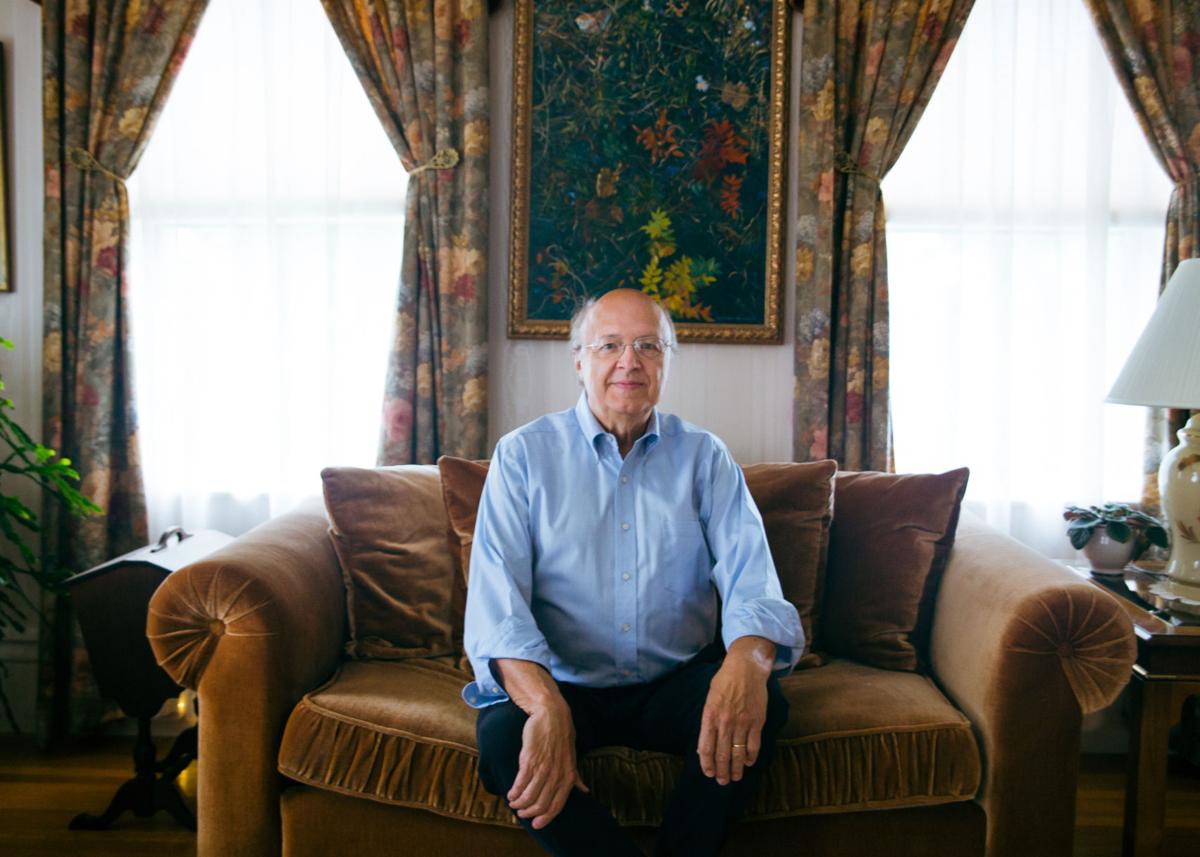 Tony Tremblay sits in his living room in Keene on Thursday, in front of the oil painting “Ground Nester” by his father, Arthur Tremblay.

Tony Tremblay in the family room of his home, where Jonathan Daniels grew up, on Thursday in Keene. Behind him is the painting “Quiet Waters” by his father, Arthur Tremblay.

Tony Tremblay sits in his living room in Keene on Thursday, in front of the oil painting “Ground Nester” by his father, Arthur Tremblay.

Tony Tremblay, 76, is a compelling narrator. He starts at the beginning of a story and proceeds in a logical sequence in a steady cadence — practiced no doubt from years of persuasive conversation carefully honed as a successful professional fundraiser. His friendly and soothing style invites one to listen.

He tells his own story in this manner.

“When I was 9 years old, we moved to Keene,” he begins, from the parlor of his restored Gothic-style home on Summer Street, the residence where civil rights martyr Jonathan Daniels grew up. In fact, he notes, the place where he sits was once the examination room where Jonathan’s father, physician Phillip Brock Daniels, practiced.

“Dad was an artist and had worked at a newspaper” in Maine, he explains of his own father, Arthur. That paper, the Bangor Commercial, was owned by Jim Ewing, and folded in 1954. Ewing then bought The Keene Sentinel (then the Keene Evening Sentinel) that same year and brought six of the Commercial’s employees with him to the Elm City. Among them was Tony’s father, who began working in The Sentinel’s advertising department.

For the Tremblay family — his father, his mother, Lucy, and three sons, with Tony the eldest — Keene was their first opportunity to live separately from Lucy’s large extended family.

“My mother was the oldest of eight — with six brothers and a sister — and when she was 14 years old, her own mother died, so she helped raise them,” along with her father, Andrew Gallant.

The entire clan, the Tremblays, all his mother’s siblings, plus grandfather Andrew, lived in the same home in Bradley, Maine, near the Penobscot River.

“We were a very close family,” Tony says, in both senses of the word.

Once relocated to Keene, the Tremblays purchased a home on Pearl Street.

“Keene was such a great place for a kid,” Tony Tremblay recalls. “We had free rein; we could ride our bikes anywhere we wanted to go. Back then, Keene had railroads, and the railroad buildings were here, and they were very intriguing to me. We had three theaters, and for a quarter you could see a movie.”

When he was 13, he began a job as a delivery boy for The Sentinel, his route a coveted one on Main Street.

“It was a wonderful way to get to know everyone. I collected the money, and it taught me responsibility,” he says. “I loved it and I loved the independence it gave me by having my own money.”

He graduated from elementary school at St. Joseph’s and then attended Keene High School, which was to prove formative.

“My high-school teachers were phenomenal,” he says. “I can’t tell you enough about the power of those four years to shape your life. It was very formidable.”

School satiated his fierce thirst for knowledge, he says. Already, he was building upon his natural curiosity about the world, a trait he says has remained throughout his life.

“I fell in love with languages,” he says, learning Latin, French and German. He joined the acapella choir and drama club.

“I was pretty well known as a singer, a soloist.”

“Neither of my parents graduated from high school. They didn’t have two nickels to rub together, but their dream was for us to graduate from college.”

It was also at Keene High where he met his future wife, Barbara.

After high school, Tremblay enrolled in Georgetown University’s School of Language and Linguistics, earning both a bachelor’s and master’s degree. While there, in 1968, he and Barbara married. She got a job at the National Security Agency, and he became a language teacher at Chevy Chase High School in Maryland.

After two years, “we wanted to move back to the area,” he says, “not in Keene itself so as to be too close to family, but close enough.”

Fortuitously, in 1970, Tremblay was hired by Franklin Pierce College in Rindge, then a relatively new institution that had been founded in 1962. The couple bought a home in Peterborough, and he became head of the school’s language department and also director of special programs and continuing education. Two years later, they moved to Rindge as he continued working at the college.

The family grew while they were in Rindge, as the couple welcomed two sons and a daughter — Andrew Tremblay, now a family physician at Cheshire Medical Center in Keene; Adam, a physician at the Veterans Affairs Ann Arbor Healthcare System in Michigan; and Suraiya Gobeil of Old Orchard Beach, Maine, senior technology project manager for Ascension, a nationwide network of hospitals.

After Franklin Pierce, Tony Tremblay was hired by Cedar Crest College in Allentown, Pa., to become associate dean for continuing education and community services. There he established the institution’s “Weekend College” and a successful bachelor’s degree program for registered nurses called “RNs to BSNs,” which rapidly grew to 300 students.

“I really didn’t want to do it, but I found out I was very good at it,” he says. “It was a wonderful learning experience and very exciting.”

But he and his wife “again felt the call of New Hampshire.” And by a lucky happenstance, Keene State College was looking for a development director in 1984 to lead a capital campaign, the first of its kind in the college’s history. He got the job.

“I loved it,” he says, appreciating the fact that it fit a career pattern where he was the first in a position, rather than following in someone’s footsteps. “I’ve always chosen jobs where I had an opportunity to build something, rather than maintaining things.”

Wanting to try his hand at the private sector, he then joined Cheshire Builders and Brickstone Masons as marketing director for housing projects they were building in the area. That ended when the housing market took a turn for the worse during a recession.

Next, he became the development director for the Massachusetts Society for the Prevention of Cruelty to Children, commuting daily to Boston from Keene.

“It was a fabulous job. I loved it,” he says, the position requiring coordinating seven local chapters around the state in a capital campaign. “I really got to know Massachusetts very well.”

In 1989, he left there to become director of development at Springfield College in Massachusetts, where he spent five years. He was then recruited to become the first-ever development director for the American Association for Cancer Research. He was tasked with building its fundraising infrastructure.

“It was a great opportunity,” he says, with worldwide travel and rubbing shoulders with some of the most distinguished cancer researchers in the world. The association is based in Philadelphia, and he commuted weekly there from his Keene home.

In 2006, he left the association and began working as development director at Crotched Mountain School, and wasn’t there but five months when the CEO of the National Foundation for Cancer Research contacted him and asked him to come work for that organization as chief fundraiser.

Tremblay negotiated an arrangement with the foundation that allowed him to work from home, with occasional visits to its headquarters in Bethesda, Md. He worked there for six years.

“It was a forerunner of the kind of working at home that COVID brought on,” he says. “But from my experience, there is something lost working at home. When you’re not physically interacting, something is lost. Over time, it became harder to make those visits to Bethesda more fruitful. Whether this Zoom technology works, I don’t know.”

After that, he joined Mount Ascutney Hospital in Windsor, Vt., leading it through two capital campaigns.

In all, fundraising was an invigorating and interesting career, he says, albeit one that “can be an all-consuming kind of pressure” since little can happen in a nonprofit organization without outside financial support. It also involves meticulous preparation and careful cultivation of donors and prospective donors.

And, fundraising is still in his blood. Although officially retired, Tremblay maintains a robust volunteer life, assisting in fundraising consulting at Home Healthcare, Hospice and Community Services in Keene, Monadnock United Way, Keene Family YMCA, Cedarcrest Center for Children with Disabilities and the Historical Society of Cheshire County.

Reflecting back on his life and long career, Tremblay again returns to his years at Keene High and the critical importance of influential teachers and mentors.

“My father was an artist; he had the innate ability to see something where others didn’t,” he says. “Scientists have that ability; good teachers have it. They can see the potential in people.”

He ends with sage advice to young people.

“You need to find out what is worth spending your life on. You have to understand that where you start is not likely to be where you end up,” he says. “You can’t be passive and expect things to come to you. Life is hard and you have to work. You have to find something that inspires you. And you have to be willing to forge ahead.”

At a glance: Tony Tremblay