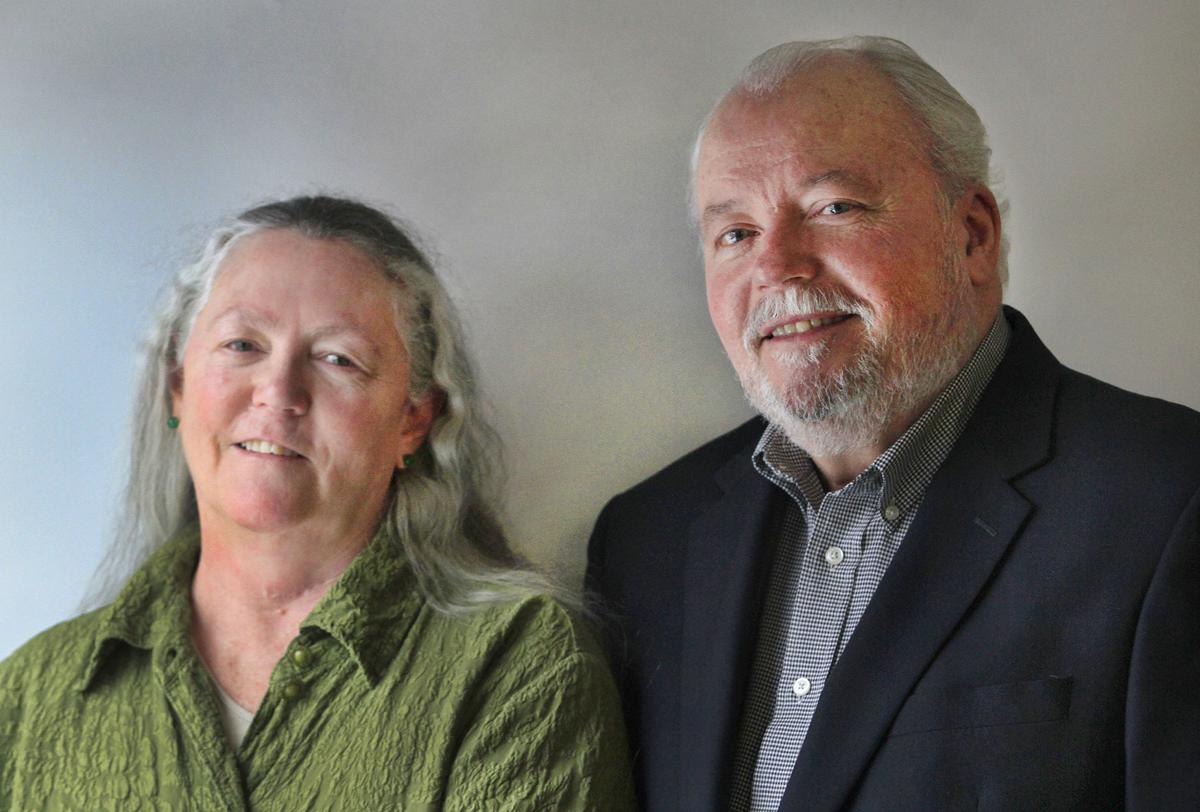 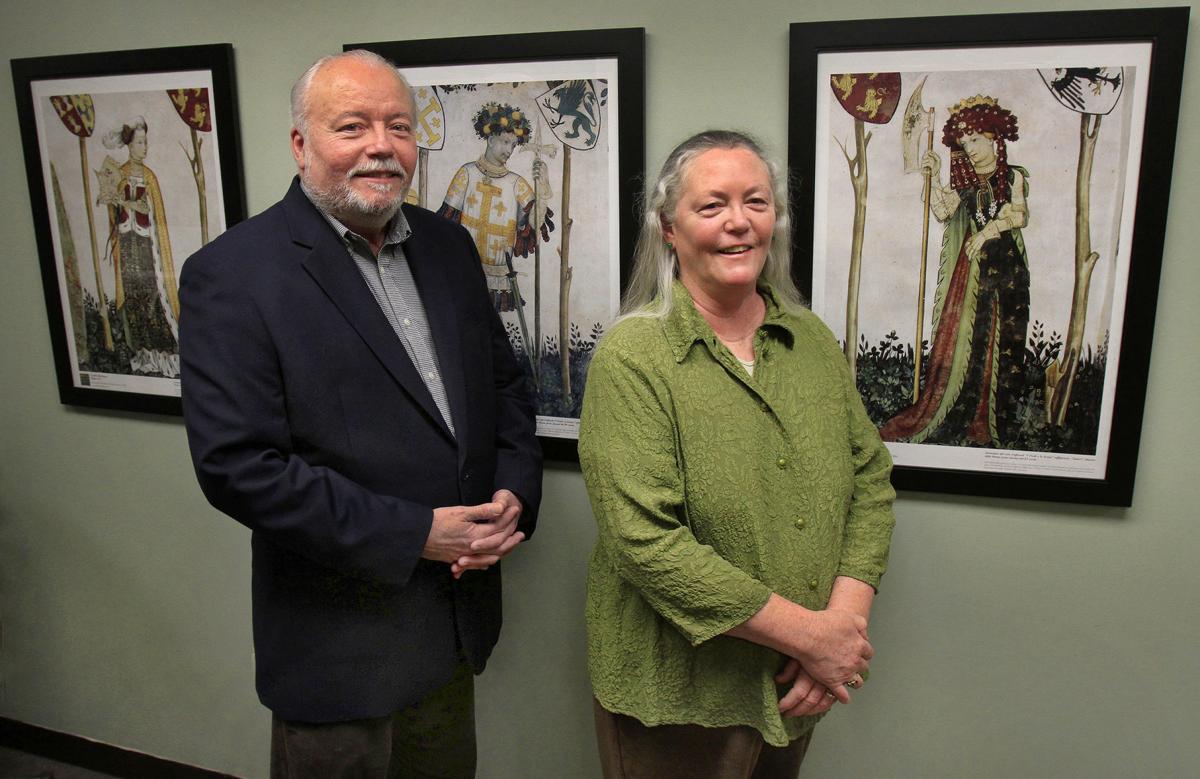 Eos Study Tours co-founders Todd Nielsen and Patricia Dooley, next to framed prints showing figures that are part of a fresco cycle decorating the walls of a 12th-century castle in northern Italy.

Eos Study Tours co-founders Todd Nielsen and Patricia Dooley, next to framed prints showing figures that are part of a fresco cycle decorating the walls of a 12th-century castle in northern Italy.

WALPOLE — In a warren of offices above the Restaurant at Burdick’s, the world unfolds in all its vastness and majestic history.

It is the headquarters of Eos Study Tours, where more than a thousand specialty group treks abroad have been conceived and organized during the past 26 years. The destinations have ranged from such exotic locales as the desert ruins of ancient Egypt to the prehistoric painted caves of Europe and the South African veldt, where humankind may have originated.

Eos is the creation of Walpole residents Todd Nielsen and Patricia Dooley, a married couple who began it in 1993. The company offers voyages to historical sites worldwide, guided by experts in such fields as archaeology, paleontology, anthropology, ancient history and architecture.

Eos was recently honored as the “Best Outbound Education Travel Specialist 2020-Northeast USA” at the fourth annual Travel and Tourism Awards hosted by LUX Life Magazine, a publication that bills itself as targeted to affluent readers.

“Travel is the opportunity to learn, and traveling with experts in the land you’re visiting is even better,” says Nielsen, a 66-year-old Manhattan native. He brims with enthusiasm as he relates the many anecdotes gleaned from a life of not only exploring the world himself, but assisting thousands of others to do the same.

“I’m a lifelong learner,” he says.

The story of how the two met, married and happened to choose Walpole as the location of both their home and business has many components. It begins in the New York metropolitan area.

Both are progeny of parents they describe as progressive. Nielsen’s father, Bob, was a Manhattan architect and his mother, Billie Jane, an accomplished artist. Some of her works now adorn his office walls. Dooley’s father, Bernard, owned a Chevrolet dealership in Somerville, N.J., and her mother, Marguerite, worked as an aeronautical engineer before becoming a homemaker who raised a family of five children.

Both sets of parents exposed their children to the arts and travel, and emphasized education, sending them to prestigious private schools. Nielsen attended elementary school in Manhattan at the exclusive Friends Seminary, founded by the Quakers in 1786. He then graduated from high school at the Collegiate School in New York City, the oldest school in the United States, which was founded by the Dutch in 1628. Dooley, 61, graduated high school from Gill St. Bernard’s in Gladstone, N.J.

“My parents schooled me in all the art galleries and museums in New York City,” Nielsen says, and a conversation with him demonstrates his encyclopedic knowledge of ancient history, literature and archaeology.

Nielsen’s and Dooley’s parents also traveled, and often included their children in the trips. This, the two contend, is where their itch to see the world originated.

In 1978, Nielsen became the travel director for the American Museum of Natural History in New York, and led its discovery tours and cruises to become an award-winning educational travel program.

After her college graduation, Dooley went on to design and develop study tours for a series of nonprofit organizations in the United States, working from Washington and New York.

The two met, briefly, in Beijing, in 1987, in connection with their respective jobs. But it wasn’t until 1988 that they became better acquainted in Wuhan, China — known lately as the city where the novel coronavirus was first identified. Both were there inspecting river boats for prospective tours.

The next year, although working for different organizations, they shared a memorable, albeit exhausting, experience in Wuhan, dealing with tours that were all set to begin when the Tiananmen Square massacre occurred in Beijing and all travel was prohibited by the government.

“That included a couple days of hectic calling to cancel everything,” Dooley says.

The two moved in together in New York City and married in 1991, on the island of Nevis, which is part of the Leeward Islands in the West Indies.

While living in New York, they visited New England frequently because a couple of Dooley’s siblings had settled in parts of Vermont and New Hampshire near Walpole. The couple fell in love with the town.

“I thought, ‘Why not do in Walpole what I was doing in New York?’ ” Nielsen says.

So, in 1993, they moved to Walpole and started Eos Study Tours from a small cabin they rented on the Cold River. Eos is the name of the Greek goddess of the dawn.

In 1996, their son, Erik Nielsen, was born. And in 1997, they moved the firm to its current location, the long complex of joined buildings in downtown Walpole that was originally Craft’s Tavern and Wentworth Hotel in the 1800s and an IGA supermarket later.

The company employs eight, including Nielsen, who is director, and Dooley, its business manager.

“I’m the extrovert,” Nielsen admits, but that’s abundantly obvious with his animated and enthusiastic storytelling. He tends to the sales and marketing of the firm, while Dooley sees to the seemingly endless logistical and financial aspects of a company that organizes myriad group trips around the world.

They designed the firm to offer a niche product of small-sized tours, rarely larger than 15 participants, with durations of between 10 and 17 days. Each tour is guided by a professional, usually a college or university professor, or staff member of a museum. In all, Eos employs more than 50 lecturers who accompany the trips.

Nielsen says that their tour guides are carefully selected. “Not all experts are good teachers. We don’t want them to just lecture; we want them to engage and mix with those on the tour. They have to be sociable and friendly.”

The firm also employs indigenous guides in the countries being visited, as well as local contacts who can be relied upon in case of special circumstances or emergencies.

Tours are divided between those that primarily take place on land, and those that occur on “small-ship cruises,” vessels that call at various ports and carry far fewer passengers than the conventional tourist ships that transport thousands.

Scheduled tours for the remainder of 2020 include “Treasures of the Holy Land,” “The Silk Road of Central Asia,” “Ancient Empires of the Amalfi Coast,” “Prehistoric Cave Art of Spain and France” and “The Legacy of Ancient Rome.” In all, Eos organizes about 50 trips per year, comprising about 600 participants. Prices for the tours can range from $4,000 to $10,000 depending on the duration and travel distance, Nielsen says.

The planning and execution of these tours is an exacting process, he notes, involving many variables and moving parts.

“Travel is a like a wild animal, a beast, and you have to guide it,” he says.

“I closely monitor the international news,” he adds, and mentions that the latest developments in the coronavirus outbreak in China will have a yet-to-be-gauged impact on worldwide travel and tourism. Also, local political conflicts and wars, as well as natural disasters, must be taken into account.

“The attacks of 9/11 really pulled the rug out from under our company,” Nielsen says. “The travel industry virtually ceased operation, and many tour and travel companies folded. We hung in there, but we had to lay off half of our people.”

Other facets of organizing these journeys are insurance, cancellations, unexpected changes in lodging and air and sea travel, and meeting the needs of older participants.

“Some of our tours can involve a lot of walking or hiking, so I tell people to spend time preparing by getting in shape,” Nielsen says.

Another issue they take into account is the increasing overcrowding of tourist destinations around the world. “We try to schedule trips on the shoulder of the off-seasons, so there aren’t the big crowds,” he says.

Nielsen boasts that about 45 percent of the travelers who participate in their tours are repeat customers, some having taken as many as 10 trips through Eos.

The couple has no intention of throttling back, now that the firm has established a national reputation based on word-of-mouth recommendations, he says.

But although work keeps them busy in Walpole, they manage to take two vacations a year.

Where? “Anywhere we want to go,” Dooley says.

The two are luggage enthusiasts, she adds.

“Our basement is a graveyard of suitcases and garment bags. Todd can’t pass up a luggage store.”

At a glance: Todd Nielsen and Patricia Dooley