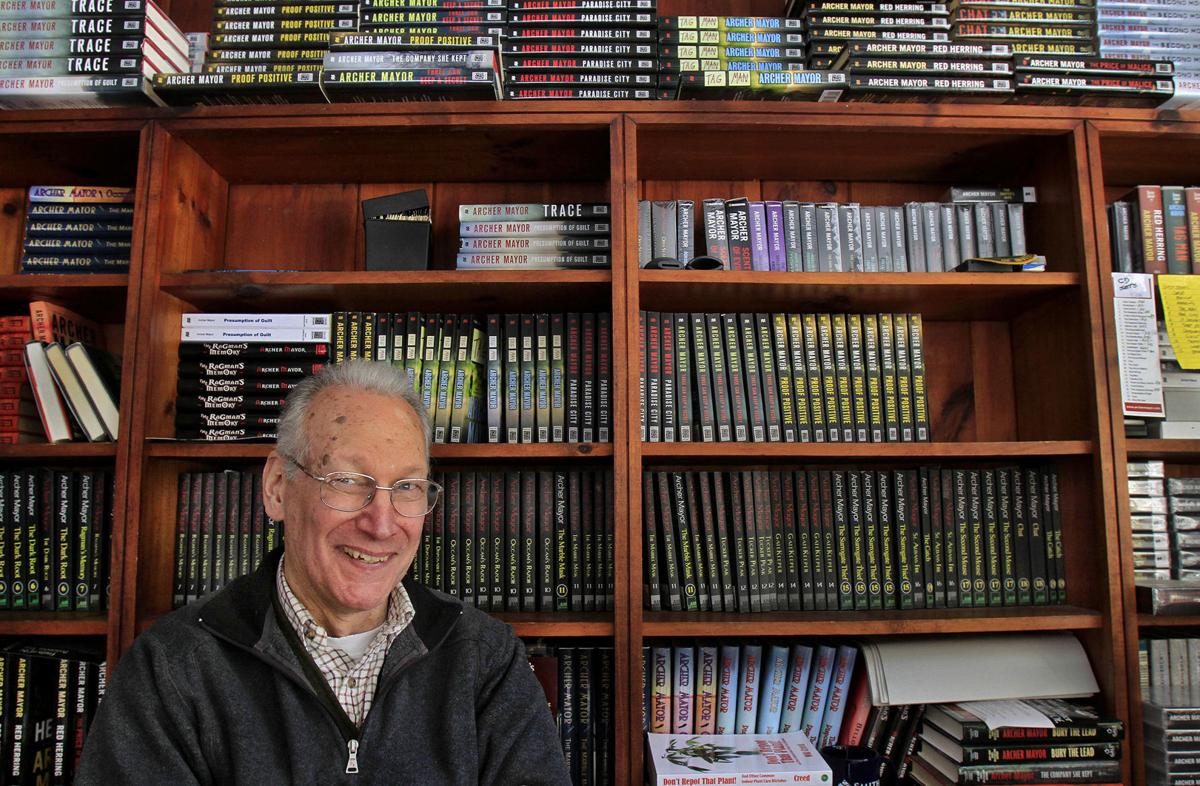 Author Archer Mayor, with an assortment of his novels at his home in Newfane, Vt., Tuesday. 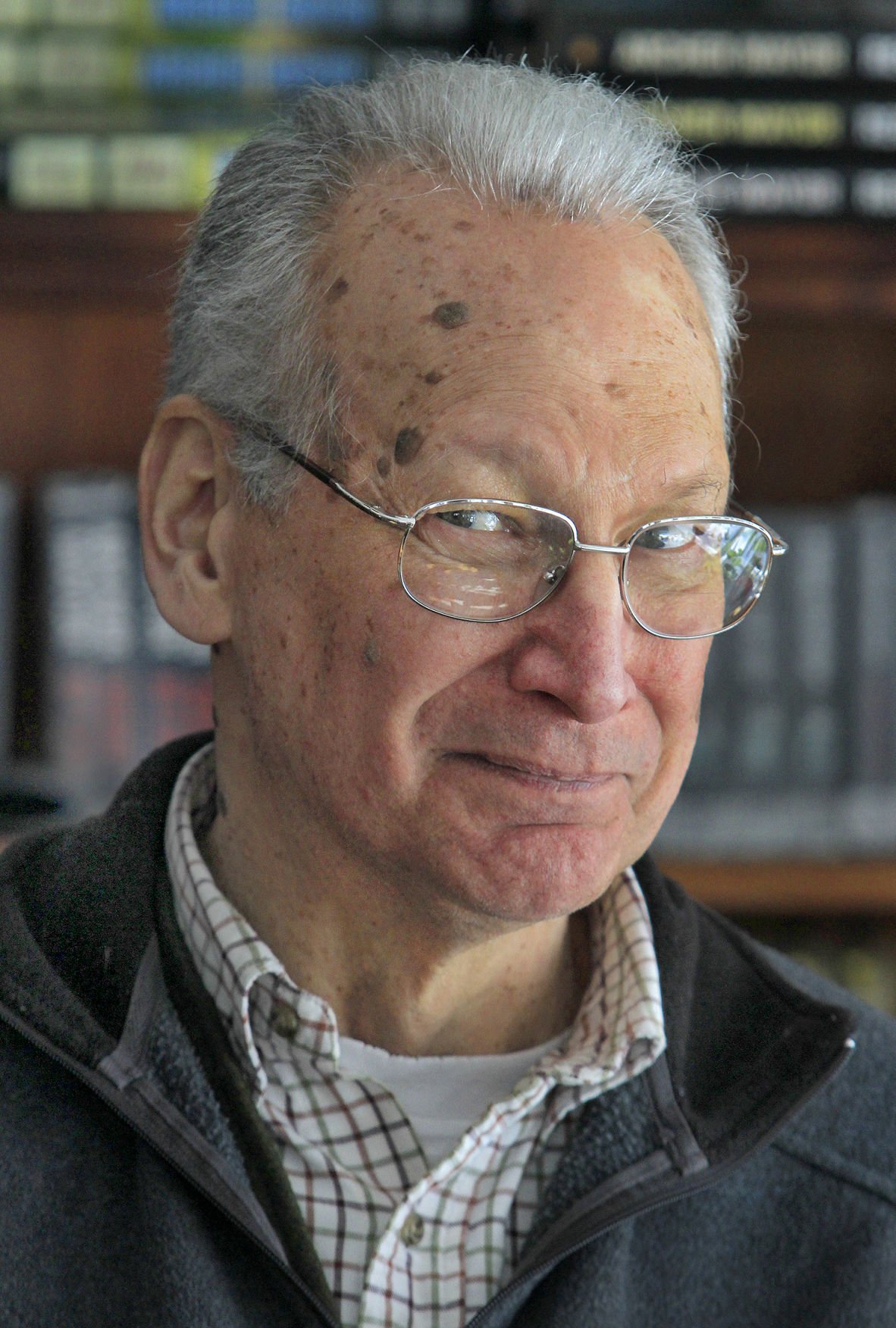 NEWFANE, Vt. — There’s a heavy blanket of snow on the landscape, certainly not an unusual sight during a Vermont winter. But the sunlight is so bright its reflection off the ground makes one squint, even through sunglasses.

It’s hard to see it at first because of the blinding sunlight, but a pickup truck rattles down Wardsboro Road here past a row of houses and backs into the driveway of a residence. Its driver exits and then reaches in and pulls out a sizable and apparently heavy black case.

It turns out that what he’s carrying is known in police parlance as a “corpse kit,” containing the tools of the trade for those who examine dead bodies — in Vermont what’s known as a “death investigator.”

This can’t be good.

Actually, it’s not what it seems. There’s no cadaver in the house, no mysterious story or nefarious deed. It’s just a man coming home from an appointment with an attorney friend in Brattleboro.

But this man’s not just any guy; he’s Archer Mayor. And he’s the author of 29 nationally popular novels in the Joe Gunther series, which fans and critics alike say are perhaps the best examples today of “police procedurals” — stories of violent and vexing crimes and how heroic or anti-heroic detectives go about solving them.

The black case is no prop. The 68-year-old Mayor is an actual death investigator for the Office of the Chief Medical Examiner of the Vermont Department of Health, covering a large area in and around Brattleboro. By his reckoning, he’s shown up after the demise of more than 800 people in these parts over the past 17 years, to try to ascertain the circumstances surrounding their deaths. There’s not much he hasn’t seen in this line of work.

He’s also a former cop, having served as one for 16 years, first as a patrolman in Bellows Falls and then as a detective with the Special Investigative Unit of the Windham County Sheriff’s Office.

“I never wanted to look in the mirror and just see a writer,” he says.

But it’s said that authors should write what they know, and Mayor’s done just that. He’s melded his many experiences as a police officer and death investigator with a vibrant imagination and well-honed writing talent to conjure up a complex protagonist who faces confounding cases peopled with colorful characters. His readers have come to know well both Joe Gunther and the stories’ settings — primarily Brattleboro and the towns around it.

Mayor is a slender but sturdy man with large hands yet delicate fingers, who keeps himself in shape by exercising and lifting weights. This is partly because he often must move bodies, some of them of considerable heft.

He’s also a man perhaps even more interesting and complex than his books’ main character.

The youngest of six children, Mayor was born in Westchester County, N.Y., on a “gentleman’s farm” his parents operated. His father, Brantz Mayor, was an executive with Time Life Inc. in New York City, serving as the right-hand man to the famous Henry Luce, who founded the publishing empire.

“My father was a guy who worked in a suit,” Mayor says, a concise descriptor befitting what a talented novelist would think to say.

During Mayor’s upbringing, his peripatetic family moved 30 times, including stints overseas, as his father worked with Time Life and then Boeing Corp.

“Moving that much made me adaptable, made me a quick study,” Mayor says.

He graduated from Yale University in New Haven, Conn., with a degree in history, a subject for which he’s held a lifelong interest. In fact, although he occasionally reads fiction and mysteries, his preference is nonfiction — particularly history and science.

After college, he worked a series of jobs — as a researcher for Time Life Books, a political advance-man, a theater photographer, a newspaper writer and editor, and a medical illustrator. He moved to Newfane 38 years ago from Thetford Hill, Vt., north of Woodstock.

It was in Newfane that he got the itch to become a cop. He enrolled and graduated from the Vermont Police Academy in Pittsford and then joined the Bellows Falls Police Department.

Since 1978, Mayor says he has chosen to work always as a “contract” employee, because it gives him flexibility and freedom to write. “I can sell myself out to available agencies. I cost no one for medical insurance, or holidays, or sick leave. At the peak of my career, I had three full-time jobs — a cop, death investigator and a writer.”

He’s also a man with a rather unconventional view of financial planning.

“I don’t own much. I don’t have any retirement, no savings account, no portfolio. I own the house and my truck and a couple of motorcycles, and that’s it. What I get is what I make.

“I’m a self-supporting writer, which is rare,” he says, citing a statistic that the average full-time author or freelance writer in the country earns only about $12,000 annually. He does much better than that, as his books have sold more than a million copies. He writes one a year, and his 30th novel is in production.

His wife, Margot Zalkind, is his business manager and tends to the marketing of his books.

Mayor says he’s “realistic and flat-footed,” about his position in the world of mystery and detective fiction, but admits to being vexed by the fact that his books haven’t been even more successful. “I’m not complaining; I make a good living, but I’ve wondered why I don’t sell more,” he says. With more popular authors, he explains — those in the range of Stephen King or John Grisham — some mysterious “alchemy” occurs in their careers that springboards them into the stratosphere of publishing. It could be something like a very favorable feature story in The New York Times or an appearance on a television show. That propellant, he says, seems to occur at random.

Some have told him that perhaps the reason he hasn’t sold more is because he’s mined the character of Joe Gunther for too long. “Some people have said I should write what’s fashionable, what’s hot,” he says, citing as an example a novel about zombies or vampires, which have been popular for the past few years.

But he’s not finished with Joe Gunther, because Gunther is him.

“With these books, I’m on the road to self-discovery. I’m writing about myself, to give some form of explanation to my life. ... I don’t tire of Joe Gunther, just as you don’t get tired of your day. This is my conduit of self-examination and exploration of my species. This is my spirituality.”

He says he was probably born a writer.

At age 11, Mayor experienced what he describes as a major trauma, which he declines to describe because “I don’t want to be labeled as a victim.” However, he says, the experience “soured me in an absolutely concrete way.

“I internalized my world at that age, and I carried stories around with me. I had to rebuild myself on my own. You build your armor with what you got to work with. It’s what you walk away with.”

Though affable and certainly able to mix with people, he says that’s not really him.

“I look at the world and its inhabitants with a healthy degree of skepticism. My work in Bellows Falls and with the Special Investigative Unit — of which about 80 to 90 percent is crimes against kids — does not expose you to the best elements of society. Cops do very unpleasant work; it’s tiring work that demands an extraordinary amount of patience.”

From this crucible, though, has come a prolific writer with a deep dedication to the craft. On his author’s website, it’s noted that The Chicago Tribune described his work as “the best police procedurals being written in America,” and The New York Times praised them as “among the best cop stories being written today.”

Mayor is the past winner of the New England Independent Booksellers Association Award for Best Fiction, the first time a writer of crime literature has been so honored.

In 2011, his 22nd Joe Gunther novel, “Tag Man,” earned a place on The New York Times bestseller list for hardback fiction. His books are regularly ranked among the top 10 for detective fiction in various national publications.

His novels don’t originate with notes, or an outline, but simply ideas. “They’re malleable, they have misty origins. I talk with a lot of people. I go a lot of places.”

And he says he’s a careful observer of people and their behavior, a skill he’s honed over his years in law enforcement. As an investigator, he says, he’s learned not to pre-judge people or situations. “You have to be a blank slate, taking in everything around you. You have to be accessible and open-minded.”

His selection of Brattleboro as the locale of his novels was no accident. “I chose it very consciously. It’s ornery and independent. You can have your Walmart over in Hinsdale, but not here; we’re not going to die under that weight.”

Keene and other places across the river in Cheshire County sometimes appear in his books, but for the most part, they’re based in Vermont.

So, for now, Joe Gunther will continue to inhabit almost every part of Windham County, as does Mayor, who sums up his life as a writer concisely: “I’m a storyteller.”

Archer Mayor’s book are published by Minotaur/St. Martin’s Press and are available on Amazon, at Barnes & Noble and IndieBound as eBooks, audio books and paperbacks, as well at all local bookstores.

At a glance: Archer Mayor