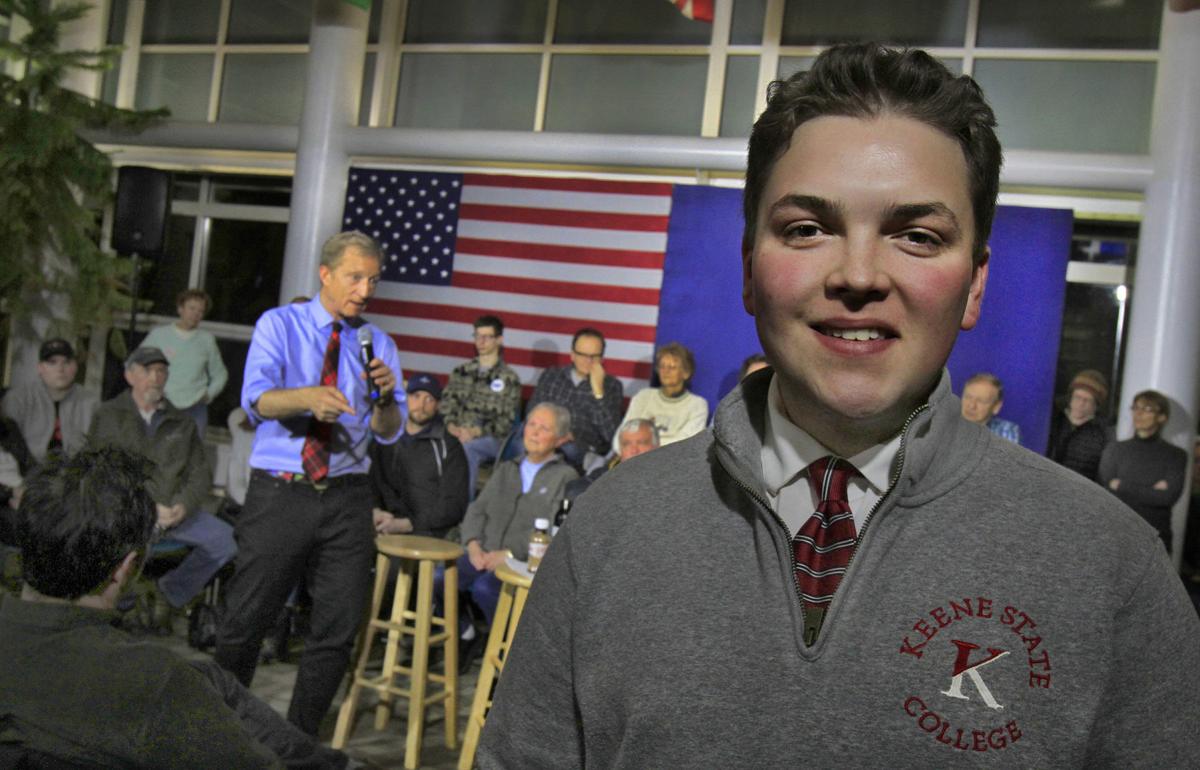 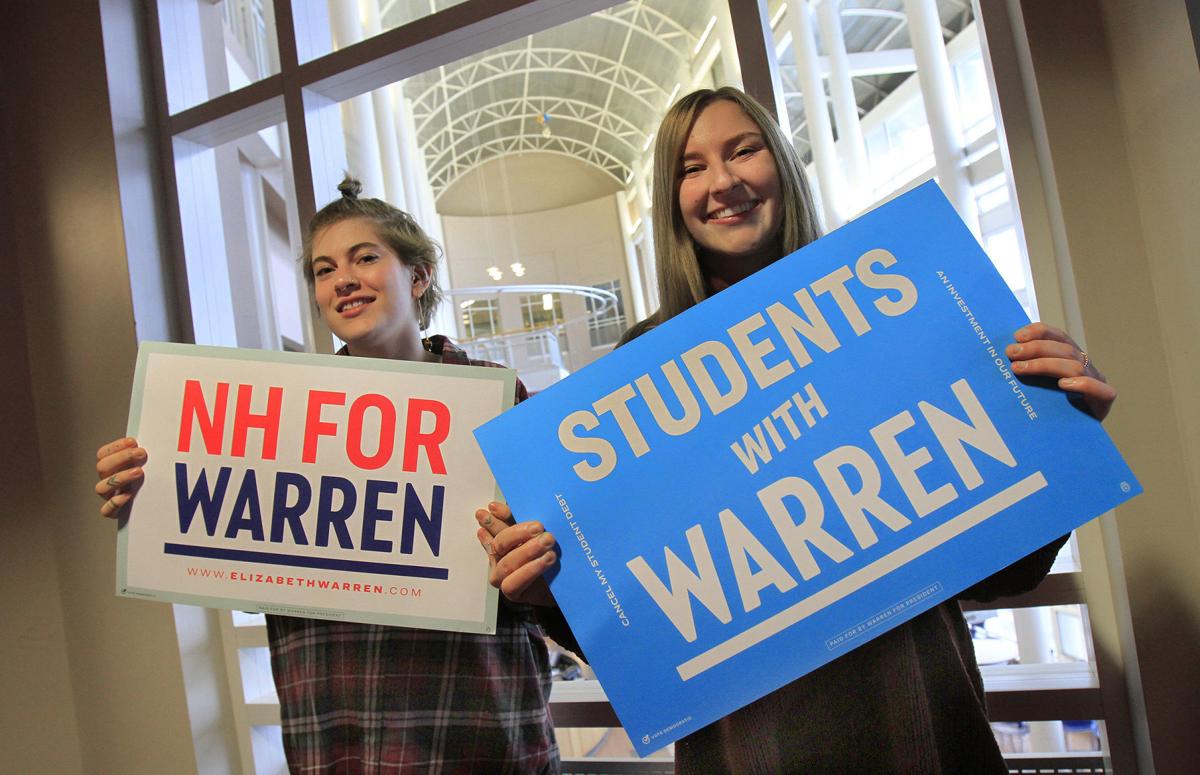 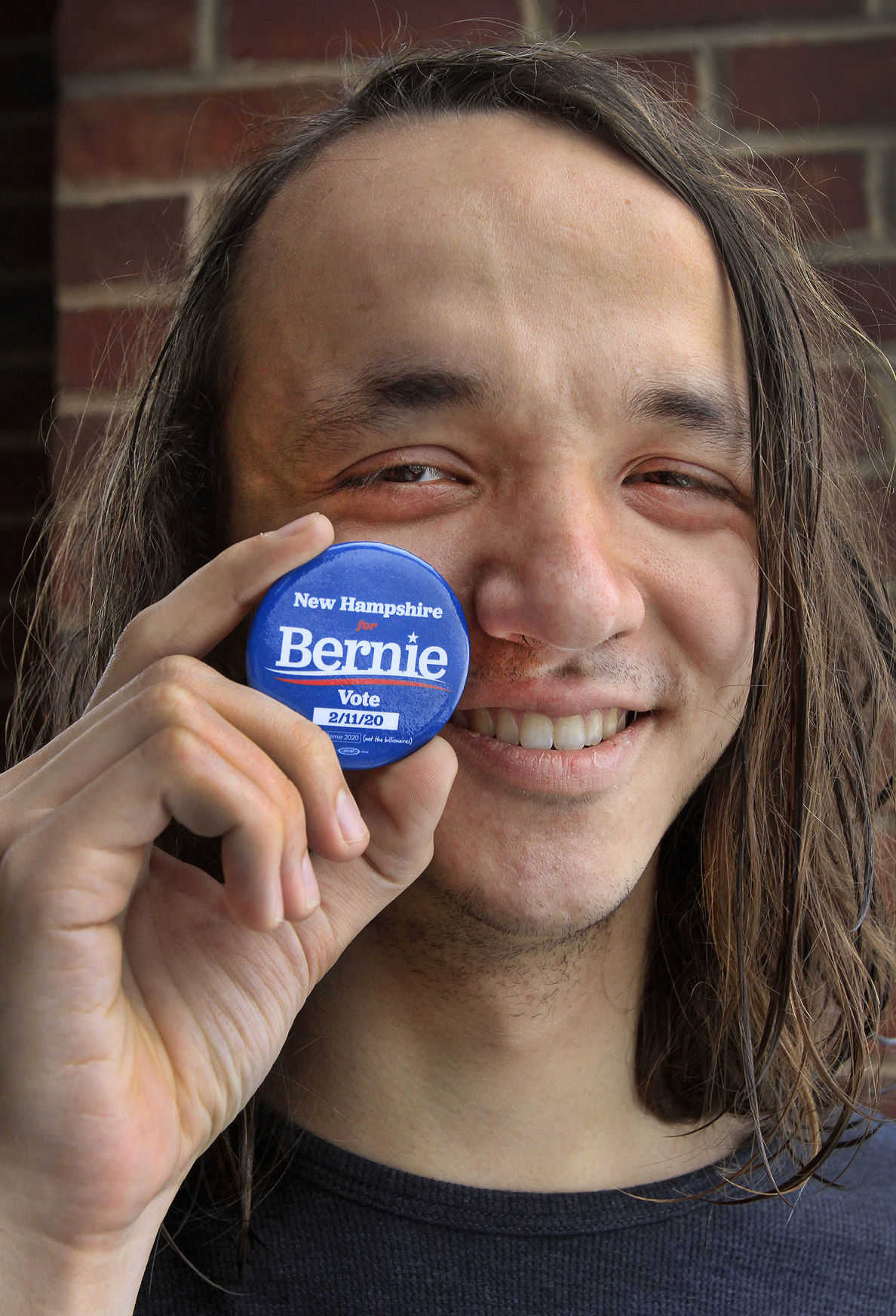 Although 33 Democratic presidential candidates will appear on the New Hampshire primary ballot Tuesday, only two reign supreme on the Keene State College campus.

“I hear nothing but Bernie or Warren,” said Madison Shimko, a junior, about the campaigns that have been the most vocal and visible at the college.

In the week before the N.H. Primary, Shimko and Roll, both still undecided voters at that point, agreed the campaigns of U.S. Sens. Bernie Sanders of Vermont and Elizabeth Warren of Massachusetts have the most energetic presence — and adherents — on campus.

Generation Z, those ages 18 to 23, now represents one in 10 voters nationally, and more than 69,000 eligible voters in the Granite State have reached voting age since 2016, according to data from the University of New Hampshire Carsey School of Public Policy. Of those ages 18 to 24 across the U.S., nearly 60 percent say they’re Democrats, while only a third identify as Republicans, according to analysis from the Pew Research Center in 2019.

In the 2018 state midterm elections, this voting bloc turned out to vote in higher numbers than in past elections, which means the support of young voters could portend well for candidates in Tuesday’s primary.

With clipboards outside the cafeteria and from tables inside Keene State’s student center, organizers for both the Warren and Sanders campaigns have repeatedly tried to lobby students to their candidates, according to Shimko and Roll. The senators have also been among the slew of 2020 contenders who have held events on the college’s campus.

More than two dozen students interviewed in the Young Student Center echoed Shimko and Roll’s conclusion about the perceived front-runners among their peers.

“Bernie is definitely popular among college students, and so is Warren. [Andrew] Yang and [Pete] Buttigieg supporters are fewer and far between, but at least you hear them mentioned, unlike the other candidates,” Tristan Slicer said.

Slicer graduated from Keene State last May but stuck around to work as an organizer for the N.H. Youth Movement, a progressive group advocating for free college and medical care and measures to address climate change.

“Like most college campuses, I think it seems to be more liberal than not, so there’s definitely a big presence of Bernie and Warren supporters for sure. Pete pulls in support, too, and may be in the top three, and more recently Yang is being talked about,” said Bernstein, a junior, who added he’s staying neutral until after the primary.

Michael Parson, president of the New Hampshire College Democrats and a student at Dartmouth, predicted Sanders, Warren and Buttigieg will be the top three candidates at college campuses throughout the state.

Midday Friday, Bernie Sanders volunteer Alex Harvey, a senior at Keene State, sat in the entrance of the student center at a table littered with Sanders literature and paraphernalia.

“I think he’s the most trustworthy. He’s consistent and has the most integrity. He’s held the same positions for 40 years,” said Harvey, adding Sanders’ focuses on addressing climate change and income inequality are important to him and other Gen Z voters.

Of all the Democrats in the race, Harvey said Sanders, 78, is best positioned to beat President Donald Trump because his supporters are the most passionate and — most importantly — he has the momentum needed to win in the general election.

This month, the N.H. Youth Movement announced it had endorsed Sanders, and Slicer said that as an organizer for the group, he agrees with the choice.

“His campaign is funded by small donors who are looking to make the fundamental change needed in this country,” including government-sponsored universal health-care coverage, free college, and a robust program of government programs to create jobs in green energy, Slicer said.

Over at Franklin Pierce University in Rindge, sophomore Paul Lambert, a member of the school’s Politics FitzU organization — a student group that facilitates events for candidates — said Sanders has the largest weekly student group meeting on campus of any candidate.

“A lot of people I talk to are Sanders supporters and frankly, he’s popular across the board with young people,” Lambert said.

“I feel like she fights for the younger generation and the middle class, which are both very important to me,” said Erin McNemar, a senior and intern for the Warren campaign.

A Massachusetts native, McNemar said she has been a fan of Warren, 70, since her arrival in the U.S. Senate in 2013. Warren’s plan for free public college is important to her because McNemar said the expense of higher education is forcing her to finish her degree in three years.

While both visible on campus, McNemar said there’s little contention between the Warren and Sanders camps. Most students on either side “agree to disagree,” she said, and say they’ll bind together behind whoever is the eventual nominee.

Atlas Weil, a volunteer with the Warren campaign and a Keene State senior, said she was a big Sanders supporter in 2016 but decided to go for Warren this cycle after a campaign volunteer approached her on campus.

“I ended up agreeing with a lot of Warren’s political ideas as well as her policies and ways to enact those policies,” said Weil, noting Warren’s plan for free childcare and college, and her platforms to protect LGBTQ rights, drew her in.

“I didn’t have any major political turmoil; it’s just a slight difference between Warren and Sanders, but I really appreciated that on her website and in her speeches, Warren lays out specific plans and talks transparently and openly about how to get them done,” Weil said.

She said she also believes Warren has the most wide-reaching and demographically diverse base of any candidate, which she predicted would enable the Bay Stater to win in the general election.

After Sanders and Warren, many at Keene State — along with Parson at Dartmouth — said Buttigieg comes in a close third in terms of visibility and support from students.

“I’m currently more of a Buttigieg person because I think we need someone more middling,” Nora Marcinuk, a Keene State sophomore, said, of the former mayor of South Bend, Ind. “I think we need to take baby steps to get things done. People are very extremist right now, but if they go to the opposite left or right end, we’re not going to make change. We need to start with something we can agree on.”

Marcinuk said she first saw commercials for Buttigieg, 38, several months ago and researched his platform.

“He still stands for climate change and equal rights, but he’s not screaming it as much as the others, which is why I think more conservative viewpoints will support him,” Marcinuk said.

“The only negative thing I’ve heard is he’s too young, which I don’t think is much of a downside.”

Also in the student center Friday was Aliza Cilley, 24, a University of New Hampshire graduate who now lives in Keene and works in the Keene State admissions office.

For the past year, Cilley has volunteered for the Buttigieg campaign.

“It’s a generational thing for me. I love Bernie and Liz, but I think we need to get someone younger. I also think it would be great to have a president who’s gay,” Cilley said.

She said she was drawn to Buttigieg for his plans to make college and medical care more affordable, but not fully government-funded as proposed by Sanders and Warren.

Mentions of the other candidates, including the leader in the national polls, former Vice President Joe Biden, were conspicuously absent on the Keene campus.

But some said tech entrepreneur and philanthropist Andrew Yang was gaining traction among students, and posters with Yang’s slogan, “Not left, not right, forward,” were scattered throughout the student center, along with ones for Warren and Sanders.

“In our country, there’s a huge partisan divide and I think he could heal that,” Keene State senior and Yang campaign volunteer Bryce Bodie told a reporter at the candidate’s town hall at The Colonial Theatre Wednesday night.

Student energy is an important marker of which candidates will come out on top Tuesday. The ultimate outcome, however, will remain opaque until the results are in, said Dan Bristol, press secretary for NextGen New Hampshire, an organization focused on climate issues and young voter registration that was founded by billionaire Democratic candidate Tom Steyer.

“It’s really anyone’s game when it comes to young people,” Bristol said. “It’s easy to say that one candidate has more support than another, but I think that also depends on who’s the loudest, and there’s quiet supporters of every candidate out there as well.”