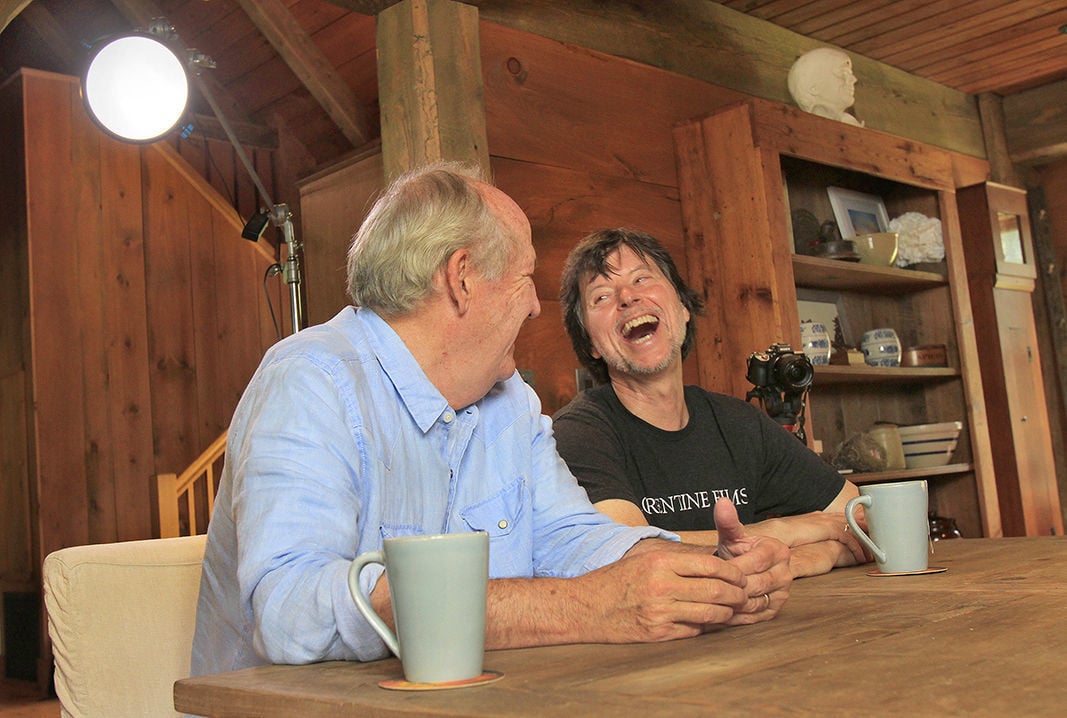 From left, Dayton Duncan and Ken Burns share a laugh in Walpole prior to an interview with The Sentinel last Thursday. 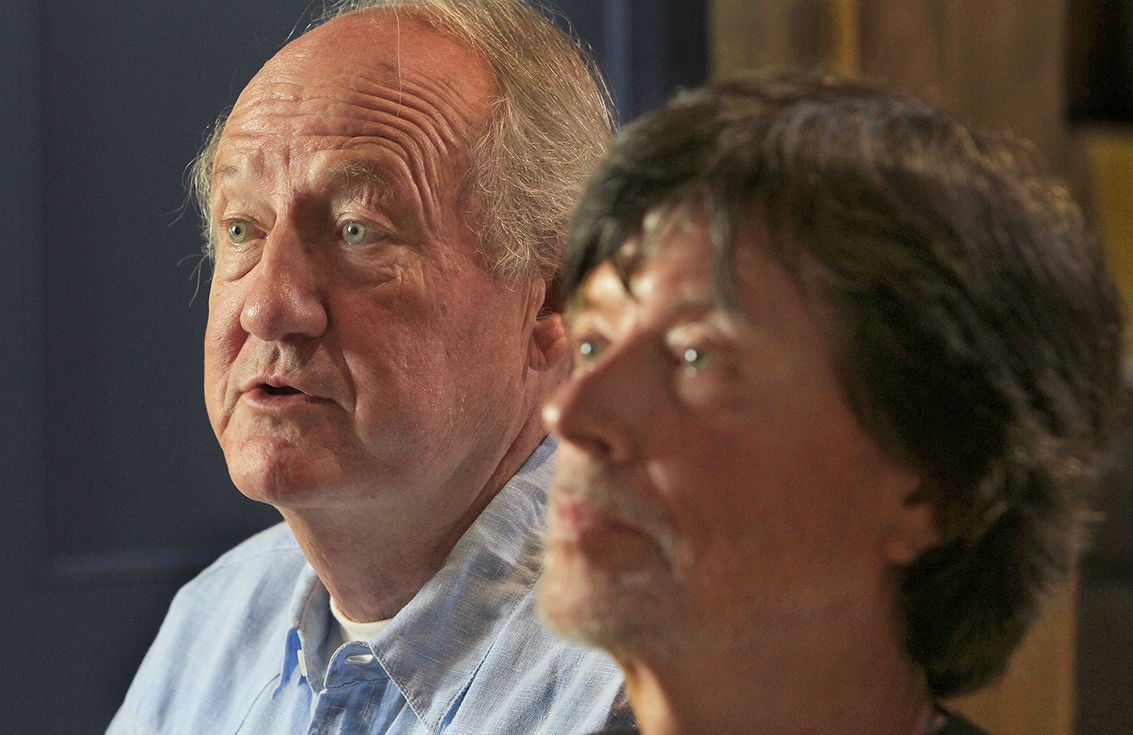 From left, Dayton Duncan and Ken Burns, shown here during an interview with The Sentinel in Walpole last Thursday.

From left, Dayton Duncan and Ken Burns share a laugh in Walpole prior to an interview with The Sentinel last Thursday.

From left, Dayton Duncan and Ken Burns, shown here during an interview with The Sentinel in Walpole last Thursday.

WALPOLE — They met here, in Americana, some 40 years ago, and never left town.

Storytellers Ken Burns and Dayton Duncan, nationally renowned for their depth, detail and innovative style in their array of history documentaries, fix cups of tea for themselves and place them on coasters on a wooden table. It’s a sunny summer morning a little more than a month before their latest project, “Country Music,” debuts on PBS, and a few unobtrusive New Hampshire PBS cameras are here. It’s all simple and rustic — no product placements, unless you count Burns’ Florentine Films black T-shirt. The all-wood décor is the star here.

Their homes and studio barn are nondescript, nestled in a rolling-hills landscape, whose color and personality changes with the season. Visitors poking along local rural roads couldn’t pick out the Burns and Duncan properties from any others in the community, unless they knew where to look.

Why Walpole? Why not art enclave New York City? Film capital Los Angeles? Why not Montana and the boundless breadth of the West, beloved by both?

“My answer to this, as I was asked by N.H. Public Television just after ‘Brooklyn Bridge’ was nominated for an Academy Award (in 1982), I just said, ‘Look out the window,’ ” says Burns, who sweeps his arm toward the kitchen window, where thick grass shimmers in the sunlight, where hillside apple trees are on the verge of producing ripened fruit.

“This is a beautiful, beautiful God’s country. We like the West, and our hearts are out there a lot — spend a lot of time there — but in the immortal words of Dorothy Gale, ‘There is no place like home,’ ” Burns says.

“This is it. I’ve lived here for 40 years, in the same house, in the same bedroom; it’s my home. It’s given me the cover to do the kind of in-depth work that we’ve done. It’s very labor-intensive work, so I don’t think we could have made it with the distractions of the big city, or the overhead necessary, to do all the stuff we’ve done.”

Burns, who just turned 66, and Duncan, who celebrates his 70th early next month, are sages at producing documentaries that chronicle our past through film, music, interviews, documents, descriptive writing, old photographs — especially old photographs. They unhurriedly guide viewers along, usually in two-hour chunks.

Their works will endure in U.S. history archives, and are staples in school libraries. The New York Times once categorized Burns’ documentaries into three groups: snack-sized Burns (films an hour or two, such as “Brooklyn Bridge” and “The Central Park Five”), entrée-sized Burns (five to eight hours, such as “The Dust Bowl” and “Prohibition”) and the full-tasting menu (11 hours or more, such as “Baseball,” “The National Parks: America’s Best Idea” and three war documentaries).

“Country Music” falls under full-tasting menu with its eight episodes and 16 hours that begin Sunday, Sept. 15, on PBS.

On Wednesday, The Colonial Theatre in Keene will host a first look at the series, with portions of all eight episodes screened. Burns and Duncan will answer questions from the audience afterward. It’s the climax of “Ken Burns Day,” as designated by N.H. PBS, and includes numerous Burns-themed events in Keene, from art to dance.

Duncan, producer and writer of “Country Music” and author of a dozen books, has been with Burns almost since he got started, and this is his final big project. A native of Iowa, Duncan’s writing career began at The Sentinel, through a friendship with author Ernie Hebert of Westmoreland. In 1971, Duncan was doing a two-year hitch in the storeroom of Elliot Hospital in Keene for his alternative service obligation as a conscientious objector to the Vietnam War, and Hebert was a sports reporter. Hebert told Duncan they needed a stringer to cover Keene High baseball and track.

“He taught me in one car drive the basic principle of writing hard news,” Duncan says of Hebert. “The hard news story is a murder mystery in which the first sentence is, ‘The butler did it.’ In other words, you start with the important stuff.”

Duncan eventually became a Sentinel staff reporter and kissed graduate school, where he planned to earn a Ph.D. in American literature, goodbye. He was already a history and politics savant, and jumped at the opportunity to become Gov. Hugh Gallen’s chief of staff. That’s how he and Burns met in 1979.

“We got a call from somebody claiming to be a filmmaker who had moved to Walpole, New Hampshire, and had an assignment from the BBC to ask four questions on camera to the governor of New Hampshire about a program we’d started to help revive small mill towns,” Duncan says. “He said his name was Ken Burns and wanted to set up a time to see the governor. And this kid walks in and, I figured, well, this was the intern, but, no, it was Ken Burns …”

Burns was working on “Brooklyn Bridge” and Duncan says, “I remember thinking, as an ex-reporter, OK, that’s really interesting, a film about the making of a bridge in New York by a guy who’s living in New Hampshire.”

A few years later, Duncan accompanied Gallen to Hollywood because “On Golden Pond,” which was filmed in New Hampshire, was nominated for an Oscar.

Duncan says: “Get a phone call, it’s the kid, ‘Hi, this is Ken Burns.’ Back of my mind, yeah, the bridge. ‘Just wanted to let you know that film I’ve been talking about has been nominated for an Academy Award.’ ”

“Two things happened,” Duncan says. “We went to the screening, he and I became friends and — I guess three things happened — and I never misjudged his sense of a good story for the rest of my life.”

The pair have been collaborators ever since, a relationship based on trust and respect, cemented in long car rides across Montana while filming “Lewis & Clark.” They can’t think of any serious disagreements they’ve had in 40 years, other than quibbling over who drives. Duncan had to prove to Burns he was a good driver. Both are even “map guys” who know the back roads — and know how to fold maps. They’re liberated from the tyranny of GPS, Duncan says. It’s a salient metaphor for their work.

“We are two people who now trust each other driving — very few people I would say that about in the world,” says Burns with a grin in describing their adventures. “Big thing: There’s a town coming up in 25 miles. I’ll have the Vichyssoise soup, escargot, filet mignon, crème brulee.

“And then Dayton will pause a little bit and go, ‘So what are you going to have on your cheeseburger?’ ”

“We clicked, you know, from the start,” Duncan adds. “When he came to interview Governor Gallen in 1979, I could tell this guy was good. We just have some of the same passions — storytelling, American history, our families, this weekend, the road, the journey.”

There are times when one or the other will want something in a film that the other frowns upon. It’s all predicated on making the film better, and they never lose sight of the big picture. Burns says if they both put in their two cents worth, they have four cents. “It’s not my two, it’s not his two, it’s ours, and suddenly it’s doubled in value. That’s been the great thing about it, and it is passionate,” Burns says.

“These are films that make us cry, and they make our audiences cry and because (the amount of material) is like maple syrup — there’s so much sap, and we’re down to just a fraction of it at the end — giving up stuff is hard for everybody. It’s hard for the editors, it’s hard for the writer, it’s hard for the filmmakers, it is hard.”

Unbeknownst to the other, every Fourth of July they would read aloud the Declaration of Independence and still do. Duncan says it was another moment when they knew it was a tight friendship.

“I have never not done it. I have never not done it,” Burns says quietly. He describes the document as some of the finest words ever written. “I can’t get through it without catching my voice, and it’s really important, particularly these days, to reinforce we’re very lucky as a country. We know exactly when and where we were born, we know exactly what our catechism is …”

Duncan tells the story of Benjamin Franklin coming out of the Constitutional Convention and being asked by a woman, What kind of government have you given us? “ ‘A Republic, ma’am,’ ” Duncan continues. “ ‘If you can keep it.’ In other words, they knew this was an experiment, nothing like it before, and if it continues or not, it’s not guaranteed. It requires certain things to happen in terms of citizens and other things, and that’s a very timely lesson, I would say.”

After Wednesday’s screening, the pair will be on the road for much of the fall promoting the series and giving interviews. Burns and Florentine Films are already at work on a project about author Ernest Hemingway; Duncan will reduce his workload to writing but isn’t planning on completely retiring. He reflects on his career that began at a newspaper, how Sentinel editor Ken Zwicker would give letter grades to reporters’ stories.

“Everything I’ve done since then has been writing magazine stories, writing nonfiction books and working with Ken; it’s the same thing,” he says of the process of reading as much as he can and talking to as many people as he can.

“I’m just a former cub reporter for The Keene Sentinel who works with the best documentary filmmaker in America. Plain and simple.”

Steve Gilbert is a Sentinel columnist.