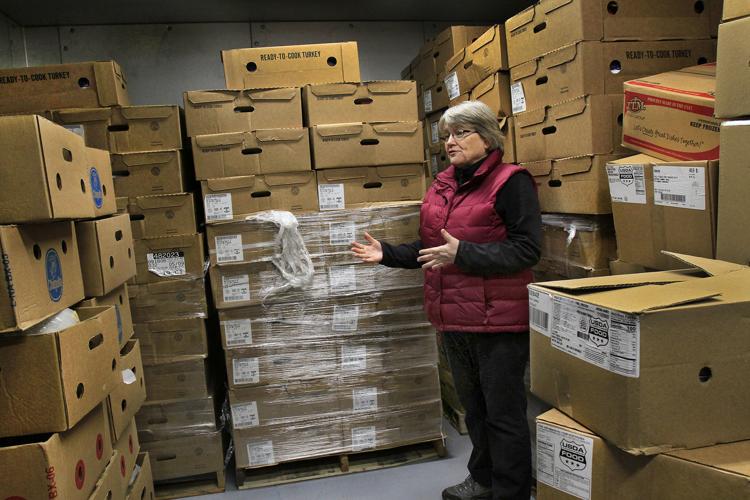 Phoebe Bray, executive director of The Community Kitchen in Keene, stands beside some of the frozen turkeys the organization was preparing to distribute for Thanksgiving dinners in 2019. 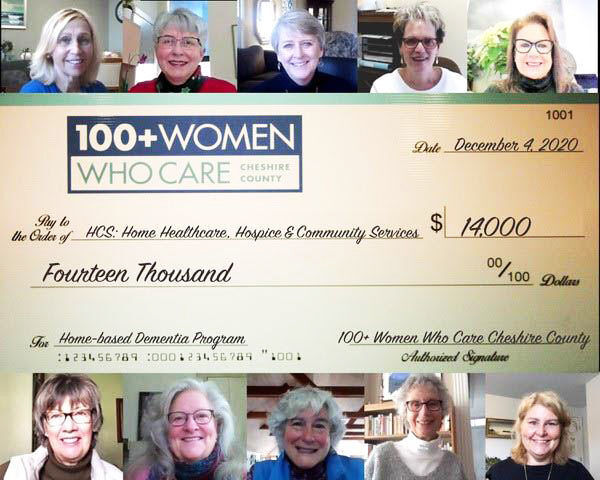 Jane Shapiro, pictured at the bottom left, was named citizen of the year Thursday at the Greater Keene & Peterborough Chamber of Commerce awards ceremony. She is one of the founders of 100+ Women Who Care. 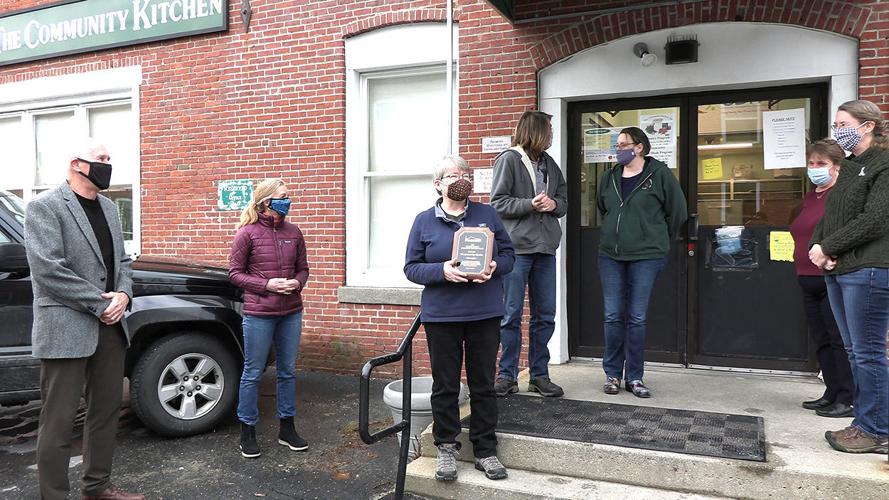 Phoebe Bray of The Community Kitchen of Keene is given the business of the year award by the Greater Keene & Peterborough Chamber of Commerce. The winners were announced via a virtual gala Thursday night. 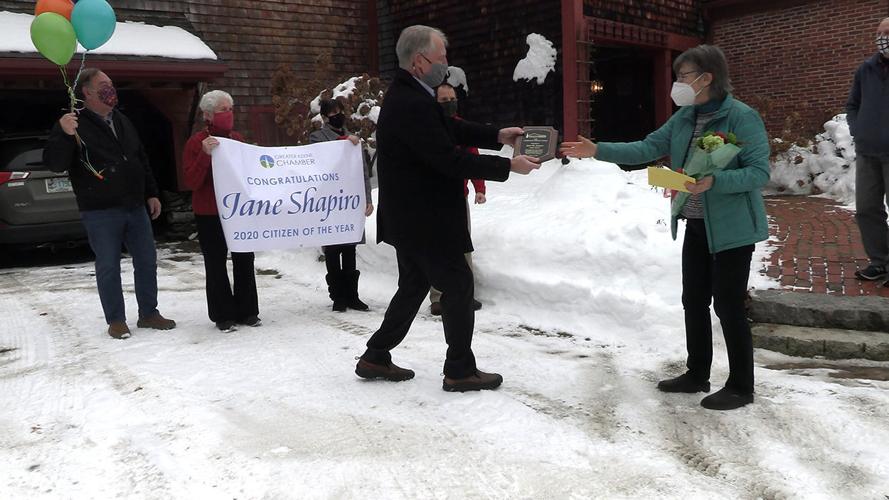 Jane Shapiro accepts the citizen of the year award from the Greater Keene & Peterborough Chamber of Commerce.

Phoebe Bray, executive director of The Community Kitchen in Keene, stands beside some of the frozen turkeys the organization was preparing to distribute for Thanksgiving dinners in 2019.

Jane Shapiro, pictured at the bottom left, was named citizen of the year Thursday at the Greater Keene & Peterborough Chamber of Commerce awards ceremony. She is one of the founders of 100+ Women Who Care.

Phoebe Bray of The Community Kitchen of Keene is given the business of the year award by the Greater Keene & Peterborough Chamber of Commerce. The winners were announced via a virtual gala Thursday night.

Jane Shapiro accepts the citizen of the year award from the Greater Keene & Peterborough Chamber of Commerce.

The word “resilience” has taken on a deeper meaning since early 2020.

This year’s community awards gala for the Peterborough and Keene chambers of commerce was the first hosted virtually, a symbol of the resilience needed to weather the global pandemic that arrived last winter. Normally, the Peterborough and Keene events draw hundreds of people to the Shattuck Golf Club in Jaffrey and the dining commons at Keene State College, respectively. Most of Thursday night’s audience watched from home; rather than a sit-down dinner, their ticket price included a $25 gift certificate to a local restaurant.

One element that didn’t change was announcing the Windsor Brooks Business of the Year Award and Community Service Award — colloquially known as the citizen-of-the-year-award.

The Community Kitchen of Keene was honored with the business award and longtime local volunteer Jane Shapiro was recognized as the citizen of the year.

A lot more was different about Thursday’s awards ceremony, live-streamed via Zoom and produced by Stoddard-based Caddigan Films. It marked the first held in The Colonial Theatre’s new venue, Showroom — where emcee Phil Suter introduced pre-recorded speakers before a small audience — and it was the debut event of the new Greater Keene & Peterborough Chamber. The Keene and Peterborough chambers joined forces late last year, and the merged organization now has close to 700 members.

“It will be a challenge and a great opportunity for the region,” said Suter, president and CEO of the merged chambers.

Even though this year’s annual gala looked much different, it was still a chance for local businesses and residents to come together to celebrate their accomplishments.

Treadwell spoke about Keene State’s resilience in dealing with COVID-19, largely thanks to investments in testing technologies.

“It was a big part of our ability to early on identify cases and move rapidly into isolating so there was no transmission of virus,” she said, noting that Keene State has had the lowest incidence in New Hampshire’s university system of secondary transmission of the virus.

Treadwell was the first of the evening to talk about “silver linings” amid the pandemic.

“If there was a silver lining to all this, we’ve rethought teaching and partnerships,” she said, citing the working relationships the college developed with the city of Keene, Cheshire Medical Center and local businesses and nonprofits. “Those learning moments hold us in good stead going forward.”

In the next speech, Joanne Conroy, president and CEO of Dartmouth-Hitchcock and Dartmouth-Hitchcock Health, talked about the resilience of staff in their hard work to deliver health-care services to the community in a manner safe for both patients and employees over the past year.

As examples, she pointed to the expanded COVID-19 testing practices the health-care system adopted and the enhancement of telehealth services.

Meanwhile, she said, the health system mitigated reputational risk by protecting its most important asset: its people. No employee was laid off or furloughed as a result of the pandemic, according to Conroy.

“We told [people] every day we needed them for our recovery,” she said.

Conroy said she realizes our community was forever changed by COVID-19. “I think however we are a much stronger organization than we were a year ago,” she said.

After a pre-recorded presentation by Lisa Scoville about her photography project, Unsung Heroes, honoring health-care professionals and other essential workers during the pandemic, the annual Windsor Brooks Award was introduced by Tedd Benson.

The honor, first presented in 2002, goes to member businesses in operation in the area for more than three years. Among other criteria, they offer innovative products and services and demonstrate economic support for the local business community. The winners of the citizen and business-of-the-year awards are chosen by committees of the previous five award winners, and the recipients’ names are not publicly revealed until this annual winter gala.

“The landscape erupted with exponentially increased impoverishment overnight,” Benson said of the pandemic’s arrival. “It’s fitting the one whose mission it is to help those in need is a standout to receive this award in these trying times.”

In the months since the pandemic started, The Community Kitchen made several changes, including increasing its hot meals program by more than 25 percent, launching a meal takeout program and partnering with local agencies to deliver meals.

The organization also kicked off a campaign to install 150 solar panels on the roof of its building on Mechanic Street to reduce energy bills and dependence on fossil fuels.

“We are all individually and collectively reliant on each other,” Benson said. “When we embrace and celebrate that reliance by giving back to our community and to those in need, that’s how we transcend and lift ourselves. That’s how communities go from surviving to thriving with nobody left behind.”

Benson handed the award plaque, in a pre-recorded presentation, to Community Kitchen Executive Director Phoebe Bray, on the organization’s front steps, with her staff watching.

In another pre-recorded speech, Joe Tolman, owner of Bulldog Design in Keene, talked about his Great Grey Tee Project, which he started last spring as a fundraiser for local businesses.

Bulldog emblazoned the logos of 100 area businesses in his catalog of graphics on gray T-shirts, giving $10 in profits from each shirt to the corresponding business. In a few months, Bulldog Design raised $100,000. With national coverage of the story, others followed suit and using that model raised $2 million around the country for small businesses affected by the pandemic, according to Tolman.

“Resilience is just not giving up,” he said. “It’s being determined not to lose everything you’ve worked so hard for.”

The second award of the evening, the Community Service Award, was presented by last year’s winner, Michael Chelstowski.

Much of it is in community health education at Cheshire Medical Center, where she served as community health coordinator. In that position, she initiated many changes, including programs in tobacco prevention, combating childhood obesity and providing no-cost medication assistance. She also launched Dental Health Works, which provides dental care to Cheshire County residents who have limited access to oral health services. It includes Cheshire Smiles, a dental-care outreach program at the region’s elementary schools.

Among her many other community service contributions are founding 100+ Women Who Care, a group that gathers four times a year to donate money to a selected charitable organization.

So far, the group has generated a quarter million dollars for local initiatives that benefit housing for the homeless, fight childhood hunger and provide COVID-19 relief, according to Chelstowski.

He read a quote from a friend of Shapiro describing their relationship.

“[Friendship] is a lifelong commitment on her part. If you’re ill or need support, she is there — even before you call for help.”

“She treats our community as she does her friends,” Chelstowski said of Shapiro, who accepted her award in a pre-recorded presentation.

The market, which recently completed an expansion project to meet increasing demand, launched a curbside pickup service during the pandemic and is in the process of hiring more full-time staff in time for a grand reopening this spring.

“We survived and we thrived,” Risley said in her pre-recorded presentation.

She talked about her gratitude for the chamber and the open dialogue she’s had with staff and member organizations about best practices that she said have been especially helpful during an unprecedented year.

“Resilience is getting up in a way that doesn’t knock down other people,” she said. “I hope we see a lot more silver linings this year.”