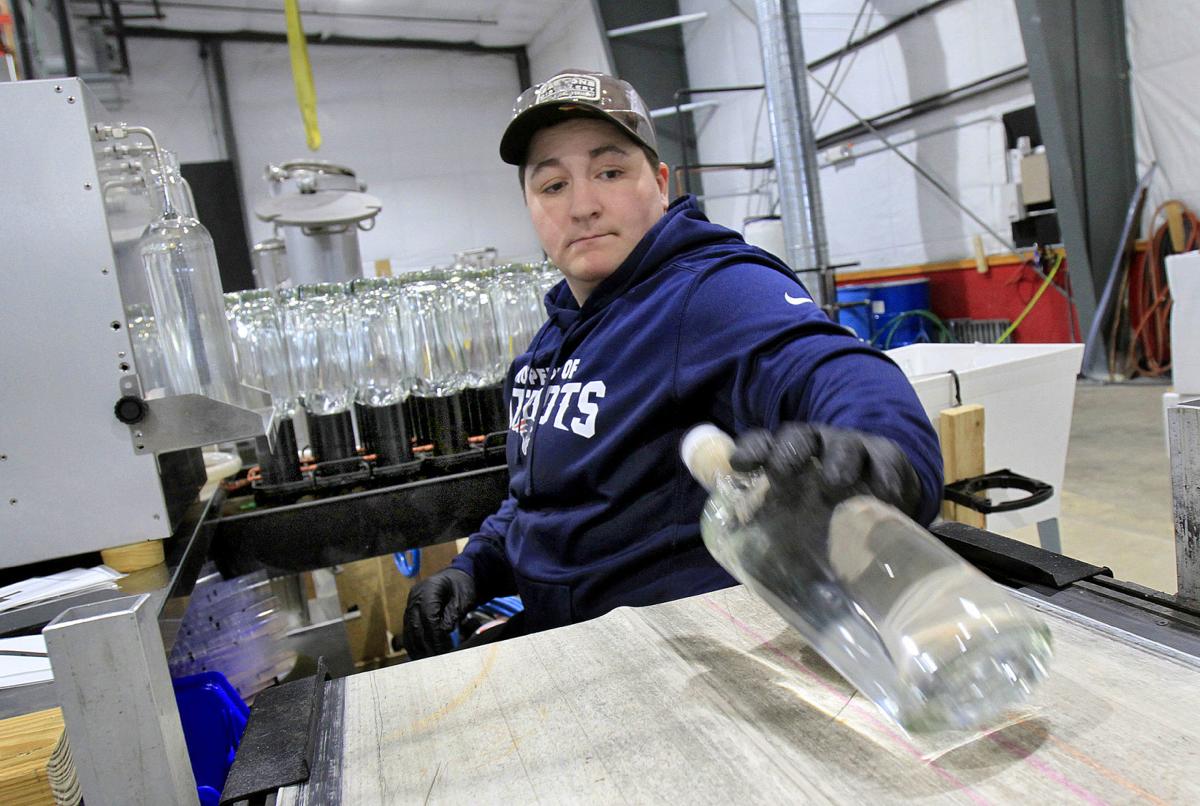 Alicia Porter, production assistant at Saxtons River Distillery in Brattleboro, bottles alcohol to be used as a sanitizer at the plant Wednesday. 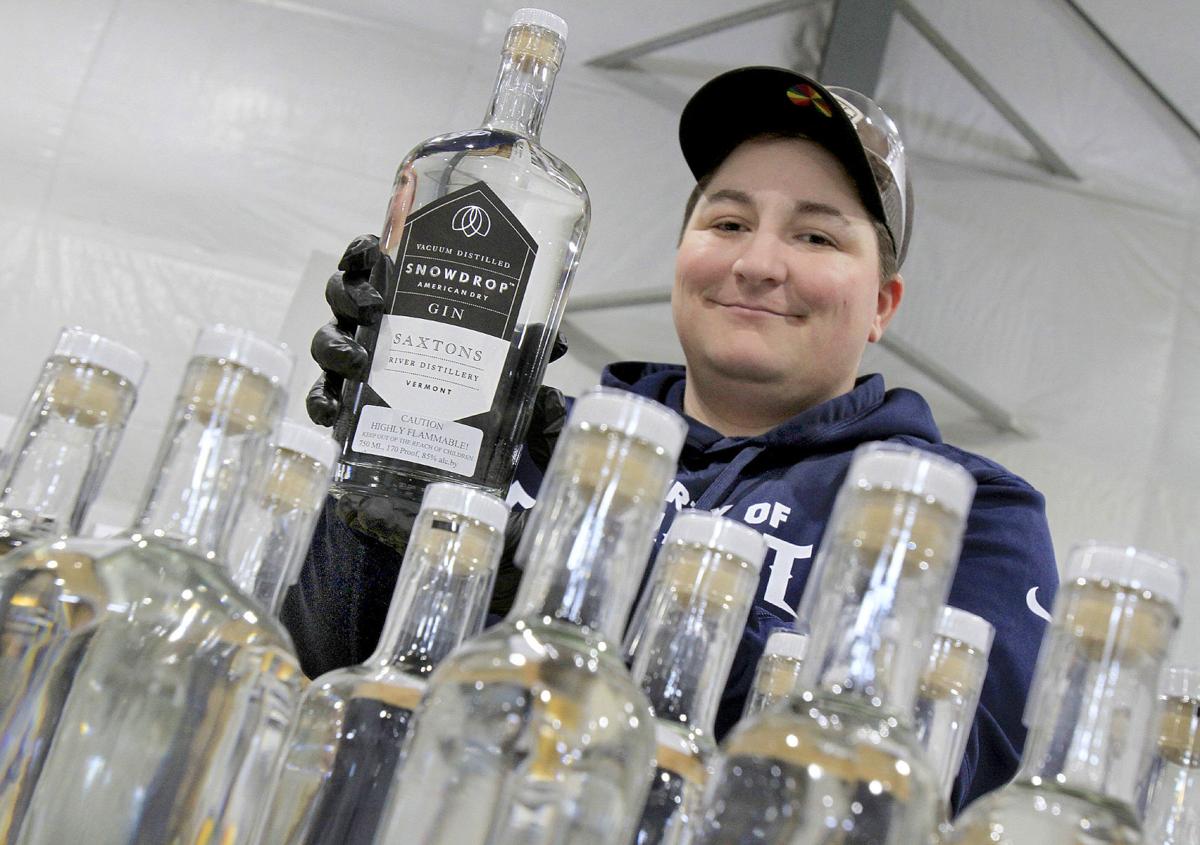 Alicia Porter, production assistant at Saxtons River Distillery in Brattleboro, with gin being bottled for use as a sanitizer.

Alicia Porter, production assistant at Saxtons River Distillery in Brattleboro, bottles alcohol to be used as a sanitizer at the plant Wednesday.

Alicia Porter, production assistant at Saxtons River Distillery in Brattleboro, with gin being bottled for use as a sanitizer.

In an innovative solution to the sanitizer shortage, area distilleries are using their alcohol to make disinfectant.

Responding to the COVID-19 pandemic and the resulting run on hand sanitizer, the U.S. Food and Drug Administration released a policy Friday that temporarily lifts restrictions on its production, which is typically limited to licensed or registered drug manufacturers. The document includes labels for the product and the recipe, pointing to recommendations from the World Health Organization.

Copper Cannon Distillery spent Saturday distilling 40 gallons of alcohol to create a hand sanitizer, which is available for free at the West Chesterfield facility in a fill-your-own-bottle format, limited to 8 ounces per person.

Tastings and tours are on pause, owner Blake Amacker said, but he’s still selling spirits by the bottle, noting there’s been a slowdown since the outbreak.

“I’m pretty fortunate that I have another job,” Amacker, an employee of Corning Specialty Materials in Keene, said. “If I was depending just on this, it might be a different story.”

The distillery is accepting donations for the sanitizer, which Amacker said will go directly to local bartenders and restaurant staff whose jobs have been affected by the virus. Some establishments that carry his product have closed, he said, and he wants to help the employees.

As of Wednesday, Amacker said he had donated about $600 to area restaurants.

The governors of New Hampshire and Vermont have prohibited on-site food and drink consumption at restaurants, bars and similar establishments, limiting them to takeout and delivery. Additional orders from the governors allowed delivery sales of beer and wine, as well as cocktails in Vermont.

A Facebook post by Copper Cannon Monday afternoon asked for donations of sanitizer ingredients, due to high demand, including unopened packages of sugar and hydrogen peroxide.

Saxtons River Distillery in Vermont has been making a 170-proof version of its Snowdrop Gin. A post on the business’ Facebook page nearly two weeks ago gauged interest in an alcohol that would be strong enough to be used as a sterilizer, and the idea was well received. The product isn’t denatured, which means it’s technically drinkable, though the distillery doesn’t recommend it.

Company owner Christian Stromberg wrote in an email that, as a kidney recipient, he has to be vigilant about not getting sick, so the lack of availability of disinfectants hit home.

The distillery is selling the 750-milliliter bottles of Snowdrop Gin for $21 from its Brattleboro tasting room, and Stromberg said he’s contacted area health providers to let them know the product is available.

While the effect of the COVID-19 outbreak on the wholesale market remains to be seen, Stromberg said his retail business has taken a significant hit.

“People have asked why we aren’t giving it away, but I’m trying to keep people employed,” he wrote Friday. “... I wish we were bigger, that we could offer to give it all away.”

A Facebook post Sunday said that because of the positive response to the product, Saxtons River is able to donate some of its gin to Meals on Wheels “in an effort to keep them safe while they do their amazing jobs.” Any interested nonprofit organizations can message the company on its Facebook page at facebook.com/SaxtonsRiverDistillery, the post says.

This weekend, New England Sweetwater Farm and Distillery will offer its own high-proof alcohol to first responders.

Robert P. Spruill, the owner of the Winchester distillery, said ambulance personnel, police officers, firefighters, health care providers and “anyone who’s on the frontlines right now” can bring their own glass jar to be filled at no cost.

And to fill the rest of the community’s immediate need for hand sanitizer during the crisis, the distillery is exploring a potential partnership with W.S. Badger Co. in Gilsum, maker of organic skincare products.

Spruill said Friday’s news from the FDA seemed like an indicator of how bad the shortage is, and he thought, “Oh my God, what if the cops and the firefighters and the ambulance drivers can’t get enough of this stuff?”

Sweetwater is using its moonshine recipe and running the alcohol through its stills three times for a product that Spruill said will be between 160- and 190-proof.

He doesn’t have the capability to order glycerine at the necessary quantities to make a complete hand sanitizer, he said. Plus, he quipped, he’s not aiming for something to “make your hands silky smooth.” The alcohol is meant to quickly disinfect hands and surfaces.

Spruill urged any first responders who have questions to contact him directly by emailing nesweetwater@gmail.com or calling or texting his cell, 617-980-1860.

“If your cops are sick, and your ambulance drivers are sick, and they can’t help everybody else,” he said, “that, to me, would be a worst-case scenario.”