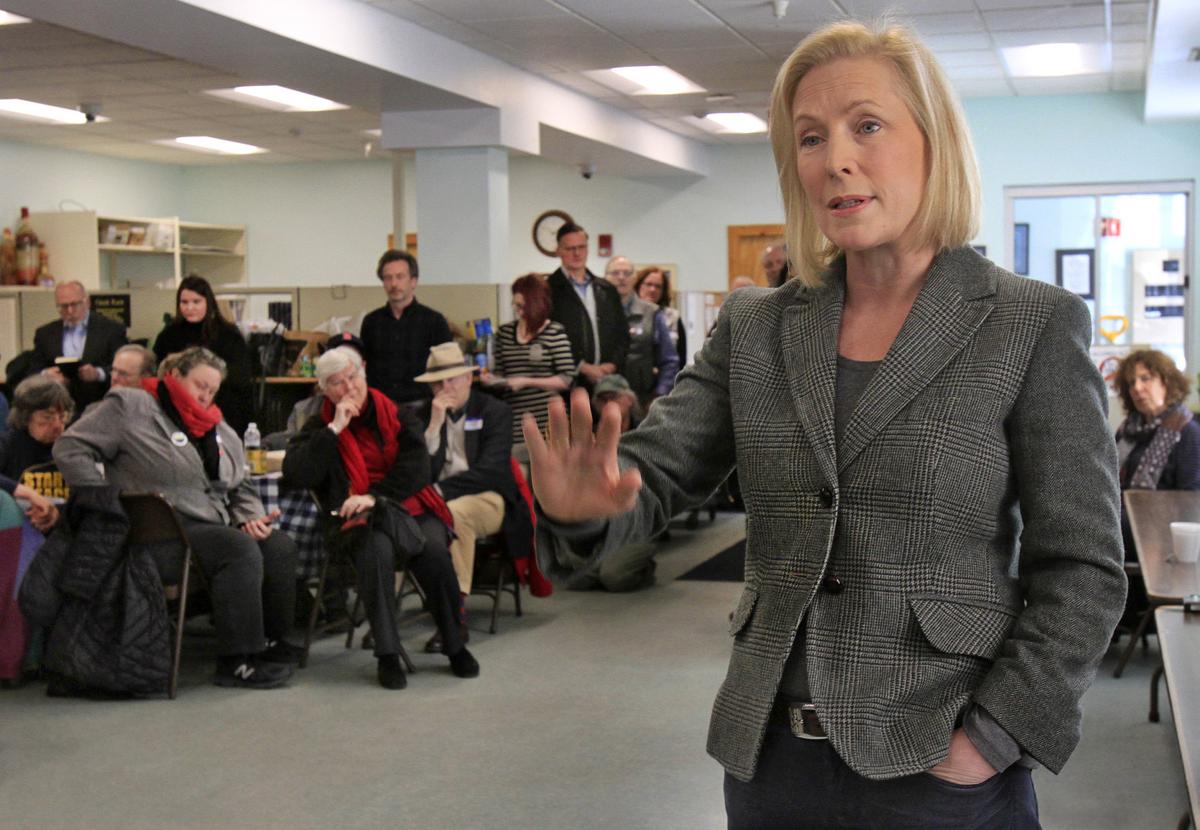 U.S. Sen. Kirsten Gillibrand of New York, who has formed a presidential exploratory committee, answers a question from a member of the audience during a meet-and-greet at The Community Kitchen in Keene Saturday afternoon. 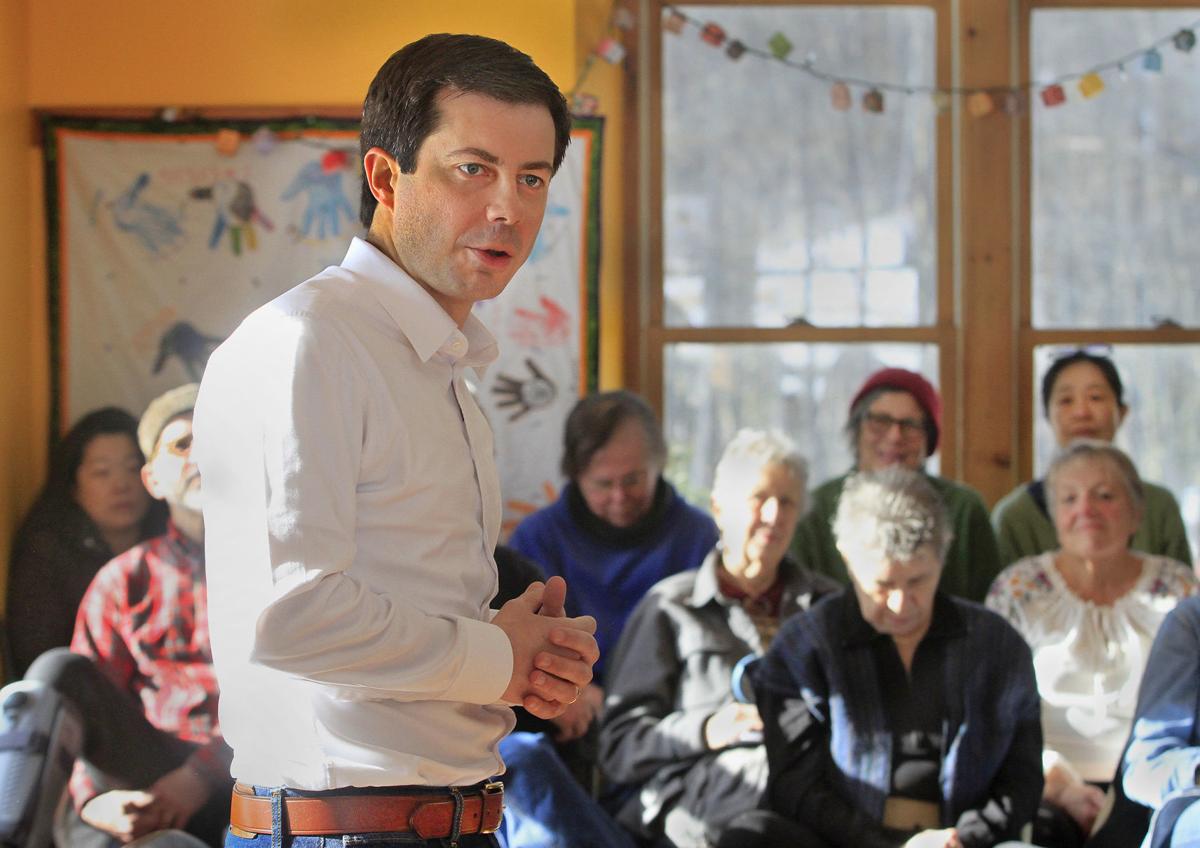 Pete Buttigieg, the Democratic mayor of South Bend, Ind., tests the presidential waters with a stop at the Orchard School in East Alstead in February. Buttigieg has formed an presidential exploratory committee. 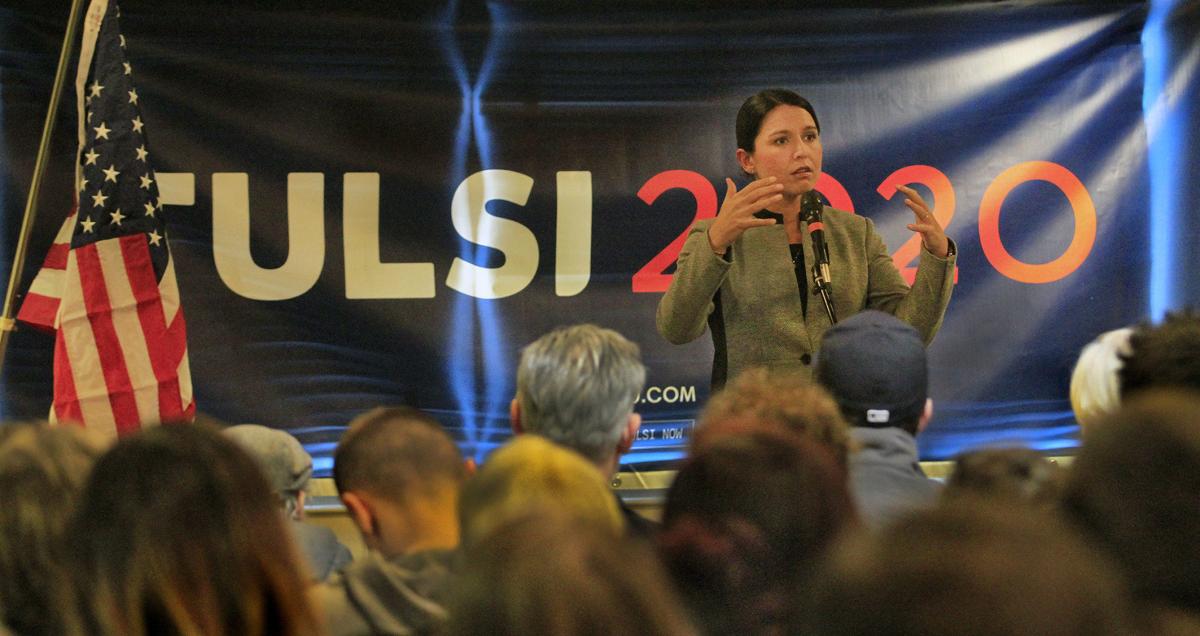 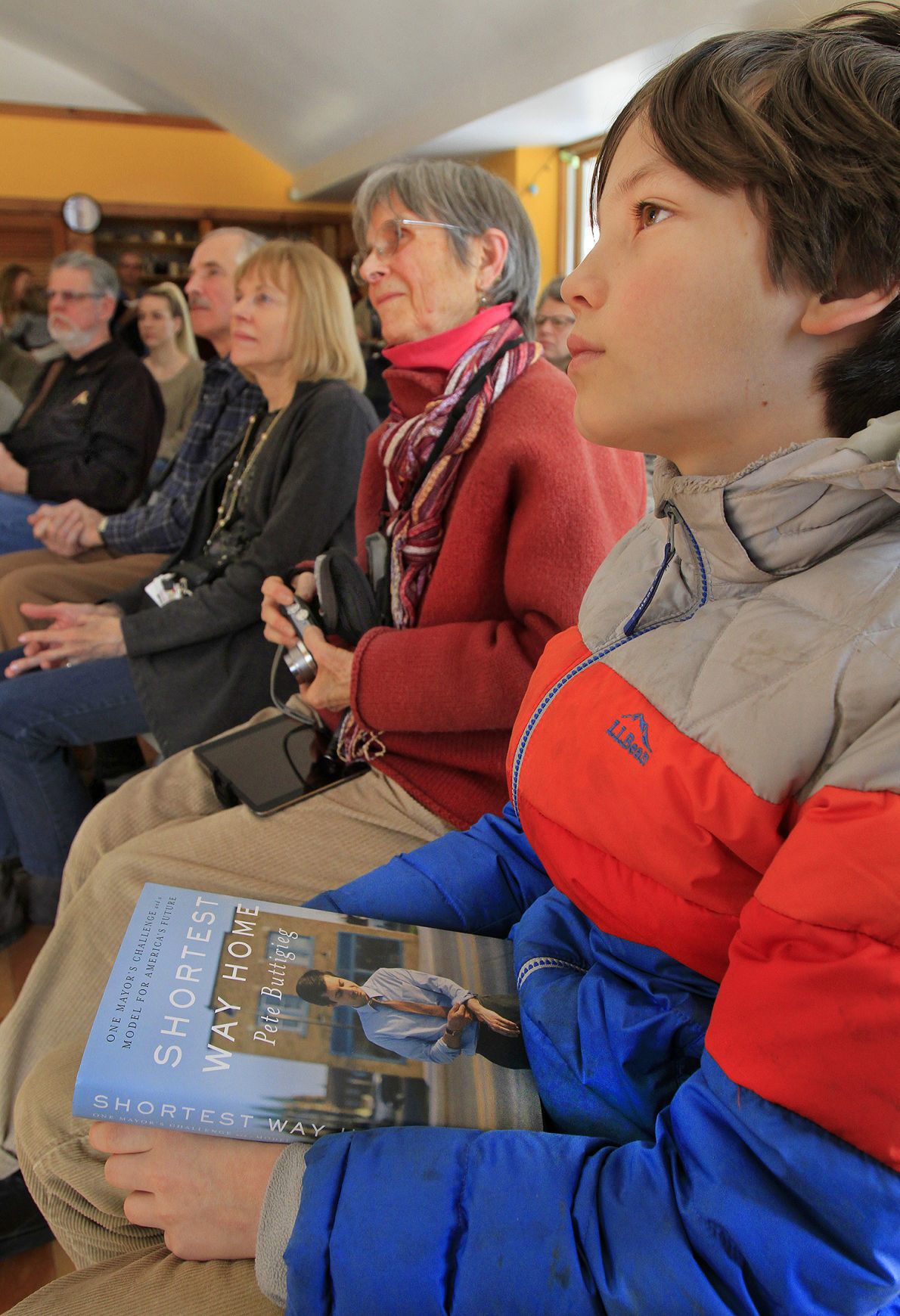 Quinn Mitchell, 10, of Walpole said he has an interest in seeing and hearing all the 2020 presidential candidates as he waits for the opportunity to have his copy of Pete Buttigieg’s book signed by the South Bend, Ind., mayor at the Orchard School in East Alstead Saturday morning. Buttigieg has formed a committee to explore a Democratic presidential run.

U.S. Sen. Kirsten Gillibrand of New York, who has formed a presidential exploratory committee, answers a question from a member of the audience during a meet-and-greet at The Community Kitchen in Keene Saturday afternoon.

Pete Buttigieg, the Democratic mayor of South Bend, Ind., tests the presidential waters with a stop at the Orchard School in East Alstead in February. Buttigieg has formed an presidential exploratory committee.

Quinn Mitchell, 10, of Walpole said he has an interest in seeing and hearing all the 2020 presidential candidates as he waits for the opportunity to have his copy of Pete Buttigieg’s book signed by the South Bend, Ind., mayor at the Orchard School in East Alstead Saturday morning. Buttigieg has formed a committee to explore a Democratic presidential run.

Nearly a year from the first-in-the-nation primary election, three Democratic presidential hopefuls stopped in the Monadnock Region Saturday during tours through the Granite State.

Each candidate pitched their platform to a standing-room-only venue, leading with a stump speech and some personal background before taking questions from the audience. While the three events were structured similarly, they were each defined by a distinct vibe.

Pete Buttigieg, the mayor of South Bend, Ind., stood in the Orchard School and Community Center in Alstead in jeans and a button-down Saturday morning, answering questions while intermittently petting an attendee’s dog that had taken up residence at his feet. In a casual atmosphere that invited practical questions about his policies and plans, Buttigieg stressed that his perspective as a 37-year-old Navy Reservist and leader of a city of 100,000 prepares him for the job in the Oval Office.

At The Community Kitchen that afternoon, U.S. Sen. Kirsten Gillibrand of New York faced a high-energy crowd ready to talk about ousting President Donald Trump. She focused on her passion for public service and women’s rights, including several mentions of believing women who step forward with accusations of sexual assault or harassment, and built on her record and experience in the Senate.

U.S. Rep. Tulsi Gabbard of Hawaii led with a much more somber-toned speech that met with eruptions of applause from an audience armed with “Tulsi 2020” signs. A member of the National Guard, Gabbard spent the majority of her time at Willie Mac’s in Keene speaking fervently against U.S. involvement in regime-change wars. She recognized the veterans in attendance during her initial address and hugged several of them afterward.

Buttigieg (pronounced BOOT-edge-edge) told the crowd he is part of a new generation of leaders, of people who were in high school during the shooting at Columbine High School in Colorado, those who will be on the receiving end of climate change and will potentially be the first in history to make less money than their parents.

“I think (it) means that our generation, which produced most of the troops after 9/11, oughta produce more leaders in political space, too,” Buttigieg said.

He talked about the need to reframe democracy and what it means to live free, clarifying that it’s not just about freedom from government overreach.

“I don’t believe that you’re free if a county clerk gets to tell you who you oughta marry based on their interpretation of their religion. By the way, allow me to introduce my husband, Chasten, who’s joining us here today,” he said to applause, smiling.

Buttigieg spent a tour in Afghanistan with the Navy, specializing in counter-terrorism.

“We have got to put an end to endless war,” he said. “There’s also a way to do that that safeguards American interests.”

The troops in Afghanistan should be pulled out sooner rather than later, he said, but those conversations need to include the Afghan government to avoid repeating history and eventually leading to a return.

He also condemned the “saber-rattling” over Venezuela and the United States tendency to wander into regime-change conflicts.

“I think about the men and women I served with and whether we have a president who takes their lives seriously,” he said.

Emphasizing the devastating effects of climate change, Buttigieg said his city of South Bend suffered a 1,000-year rainfall and a 500-year flood within an 18-month span.

“Now, either I’ve got some ridiculous luck as mayor, or things are changing around us,” he said.

Also acknowledging the flooding that ravaged Alstead in 2005, Buttigieg said the country’s leadership has had plenty of warning about climate change without taking action.

He suggested a need for more federal funding for research and development of green technologies. Though he admitted that he and no one else has all the answers yet, he said there’s no reason the U.S. can’t take the lead there globally.

Tackling the issue of gun violence from the perspective of a mayor and as someone with weapons experience, Buttigieg noted that the nation has the Second Amendment as well as a tradition of hunting and self-defense with firearms.

“Responsible, safe gun ownership is not a problem. The problem is that we’re unwilling to take some basic steps that would help keep weapons out of the wrong hands,” he said.

Buttigieg supports universal background checks and policies that would impose hurdles to gun ownership for people at risk of suicide or who have been cited for domestic violence.

His other stances include campaign finance reform and “Medicare for all who want it,” a version that would be available on the public exchange and would pave the way to Medicare for all.

Gillibrand, who attended Dartmouth College as an Asian studies major and worked as a lawyer in New York City, said she always had her eye on public service.

Putting an emphasis on resisting the hostility in the political climate, Gillibrand, 52, said she’s faced her fair share of negativity from opponents in the past. But she said she’s ready to move forward and focus on the issues.

Gillibrand called global climate change the most important issue facing the country. She has come out in support of the Green New Deal, a nonbinding resolution introduced by New York Rep. Alexandria Ocasio-Cortez and Massachusetts Sen. Ed Markey earlier this month. Among other sweeping reforms, the resolution calls for the U.S. to achieve net-zero greenhouse gas emissions within 10 years. Pointing to a university in upstate New York that focuses on training students for jobs in green energy, Gillibrand said it will take bold leadership and a commitment to inspiring such innovation to make progress.

A mother of two boys, Gillibrand included several references to the #MeToo movement, in which women have come forward with allegations of sexual harassment and assault against public figures within the past two years.

“I’m a mom of boys. I was having conversations with my 15-year-old, Theo,” she said, adding that she used the moment to teach her son about sexual consent. “... My decision in that was to not remain silent, and that was my choice.”

When asked about her policies regarding the Middle East, Gillibrand said one of the worst things the United States has done is fail to address the refugee crisis caused by the Syrian Civil War. She also said she supports Israel as an ally and a two-state solution to its conflict with the Palestinian people. Lastly, she said Saudi Arabia should be held accountable for the murder of Jamal Khashoggi, a journalist.

Gillibrand also supports Medicare for all and gun reform, which she said Congress can’t pass because of the National Rifle Association and financial contributions from gun manufacturers. She supports early voting and said Election Day should be a federal holiday.

A member of the National Guard since 2003, Gabbard, 37, was assigned to medical unit during her first deployment to Iraq. After her personal experiences, she said she became outraged because she felt that politicians in Washington, D.C., didn’t lie awake at night like she did, thinking about the soldiers who sacrificed so much in the wars overseas.

“I’m running for president to end our regime-change wars, to work to end this new cold war and to walk us back from the precipice of this dark threat of nuclear war, because our very future is at stake,” Gabbard said.

She spent most of her time Saturday arguing against meddling in other countries’ affairs, noting that money spent on such conflicts could be reallocated domestically to infrastructure, health care or a number of other items.

Someone in the audience asked for her plan to specifically address these issues. In the position of commander-in-chief, Gabbard said, she will have the power to end these wars.

One of the most pressing issues looming over the country is the nuclear threat from North Korea, she said, noting that it’s all too real in Hawaii.

Gabbard is also in favor of criminal-justice reform, Medicare for all, universal background checks for gun purchases and a $15 minimum wage. She said climate change will require a global strategy and suggested the Paris accord didn’t go far enough, though she noted that the U.S. should not have withdrawn. Gabbard said she is still reviewing the Green New Deal, but she hasn’t signed it yet because she has reservations about its vagueness.

This article has been amended to correct the branch of the armed forces in which Buttigieg serves.