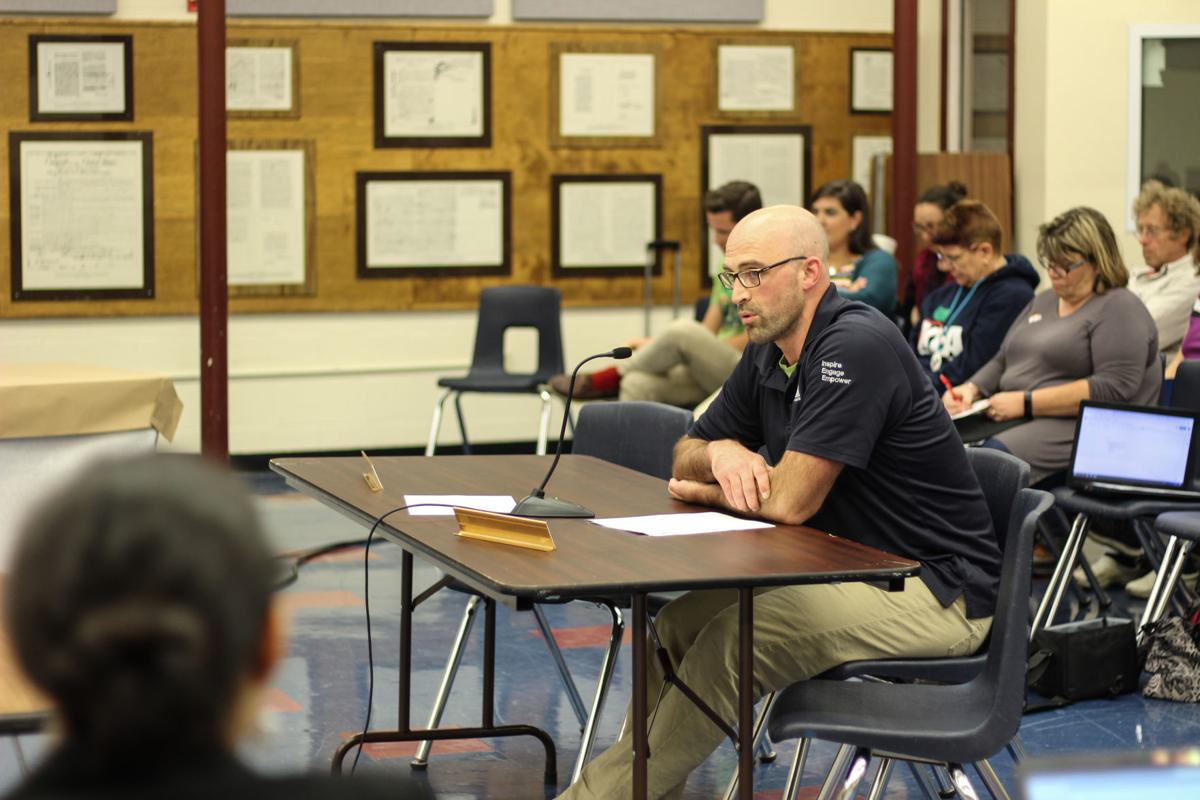 William Gillard, president of the Keene Education Association, presents the union’s six recommendations for creating safer schools at a meeting of the Keene Board of Education Tuesday night. 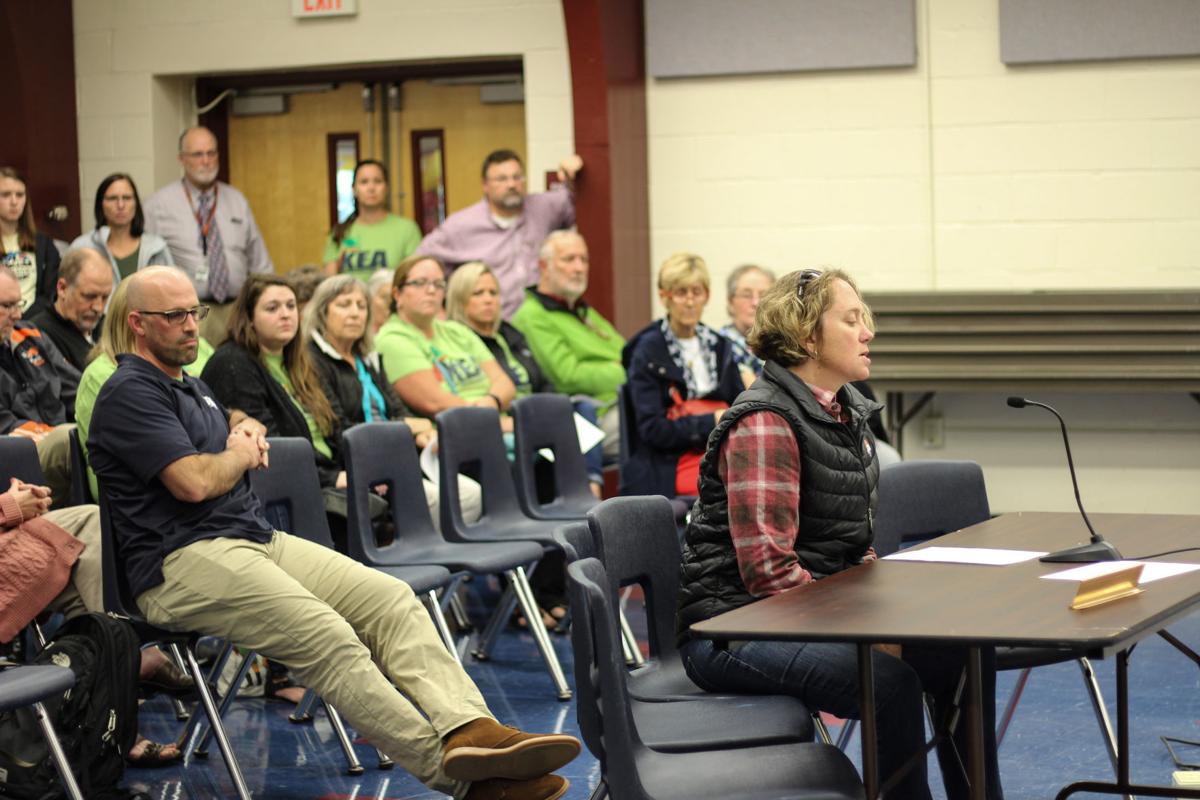 Keene resident Jenna Spear tells the Keene Board of Education about her concerns that teachers are hesitant to report safety incidents to district administration. Spear was one of about 50 people who attended Tuesday’s school board meeting at Keene High School.

William Gillard, president of the Keene Education Association, presents the union’s six recommendations for creating safer schools at a meeting of the Keene Board of Education Tuesday night.

Keene resident Jenna Spear tells the Keene Board of Education about her concerns that teachers are hesitant to report safety incidents to district administration. Spear was one of about 50 people who attended Tuesday’s school board meeting at Keene High School.

Recent controversy about workplace culture in the Keene School District bubbled up during a meeting of the Keene Board of Education Tuesday, with members of the public speaking in support of staff who are reportedly hesitant to bring forward safety concerns.

About 50 people attended the meeting at Keene High School, many of them wearing T-shirts for the Keene Education Association, the union that represents the district’s teachers.

The union has been working to address a rise in reported employee injuries in recent years, which a school board member and administrator have attributed to increased efforts to encourage reporting of these incidents.

The association contends this disciplinary action has interfered with union activities by discouraging other employees from reporting workplace safety concerns.

The district has denied the allegations, arguing that the two employees violated FERPA — the Federal Education Rights and Privacy Act that governs access to student education records — by communicating personally identifiable information about students to people who were not authorized to receive the information.

Both LaRocca and Gillard were flagging incidents at Fuller Elementary School, according to the union’s complaint. After LaRocca used an online form to tell Gillard she had observed a student bring ammunition to school and make a threat that made her feel unsafe, Gillard sent an email, with a representative from NEA-New Hampshire copied, asking for a safety evaluation of the student, the complaint says.

He also emailed parents at Fuller Elementary about organizing a meeting about the administration’s handling of safety concerns, which listed specific incidents he said had happened at Fuller recently. He clarified in the email that he was writing it as a parent of students at Fuller.

According to Gillard, who is a math teacher at Keene High, the underlying issue is an increase in safety incidents involving employees. Reports of employee injuries have risen sharply in the district since 2016, when 15 injuries were reported. In 2018, 103 injuries were reported, according to data included in the union’s complaint and confirmed by the district in its response.

Gillard was one of several people who spoke during the public input portion of Tuesday’s agenda. He presented recommendations developed by the union for creating “safer schools,” such as providing more training to all faculty and staff, creating an anonymous reporting mechanism and holding listening sessions where administrators are not present.

Above all, the district should make student and faculty safety its first priority, the union argued in the recommendations.

“If students and teachers do not feel safe, they cannot learn or teach. Do not say that safety is a priority. Make it a priority through the actions of the Board and Administration,” the document reads. “Demonstrate to the public how you have done so.”

John McMahon, a retired Keene Middle School teacher and former union officer, praised the employees for speaking up about their concerns.

“Ms. LaRocca and Mr. Gillard saw something and said something — see something, say something — to their credit, and they were punished,” McMahon said. “... I would just like to thank those two whistleblowers.”

Jenna Spear advocated for the union’s sixth recommendation — to hold listening sessions without administrators — and said she’s heard teachers and tutors in the district say that safety concerns raised with administrators go into “a giant black hole.”

“I am not a teacher. I am not a member of the KEA. But I am here to support every single one of these teachers that care about our student safety,” Spear said. “This is a really upsetting thing to know that my kids and my husband are in buildings where safety doesn’t seem to be taken seriously.”

“I agree with the previous commenter about, that there needs to be a form where teachers can feel safe and appreciated and supported to make these comments, because at the end of the day, it’s really the teachers on the ground that know what’s going on in the classroom,” Traviss said. “And so they have to feel that ability to be able to speak out so we can all work forward as a community to solve these problems.”

George Downing, chairman of the school board, thanked those who spoke and said the board will take their comments into consideration. He emphasized that per board and district policy and procedure, the district does not discipline employees for reporting safety issues.

He called the increase in incident reports a “direct result” of administrators’ efforts to standardize the reporting process across all district schools.

“If it continues to double, then the problem is very different than the one that we thought we had. If it goes down, then the efforts are working. If, as I expect that they will stay roughly the same level as we will have just started implementing new safety procedures, then it means that the new reporting system is working,” Downing said.

“And then we would have to get ahold of the data and figure out what it’s telling us and what actions to take and move forward.”