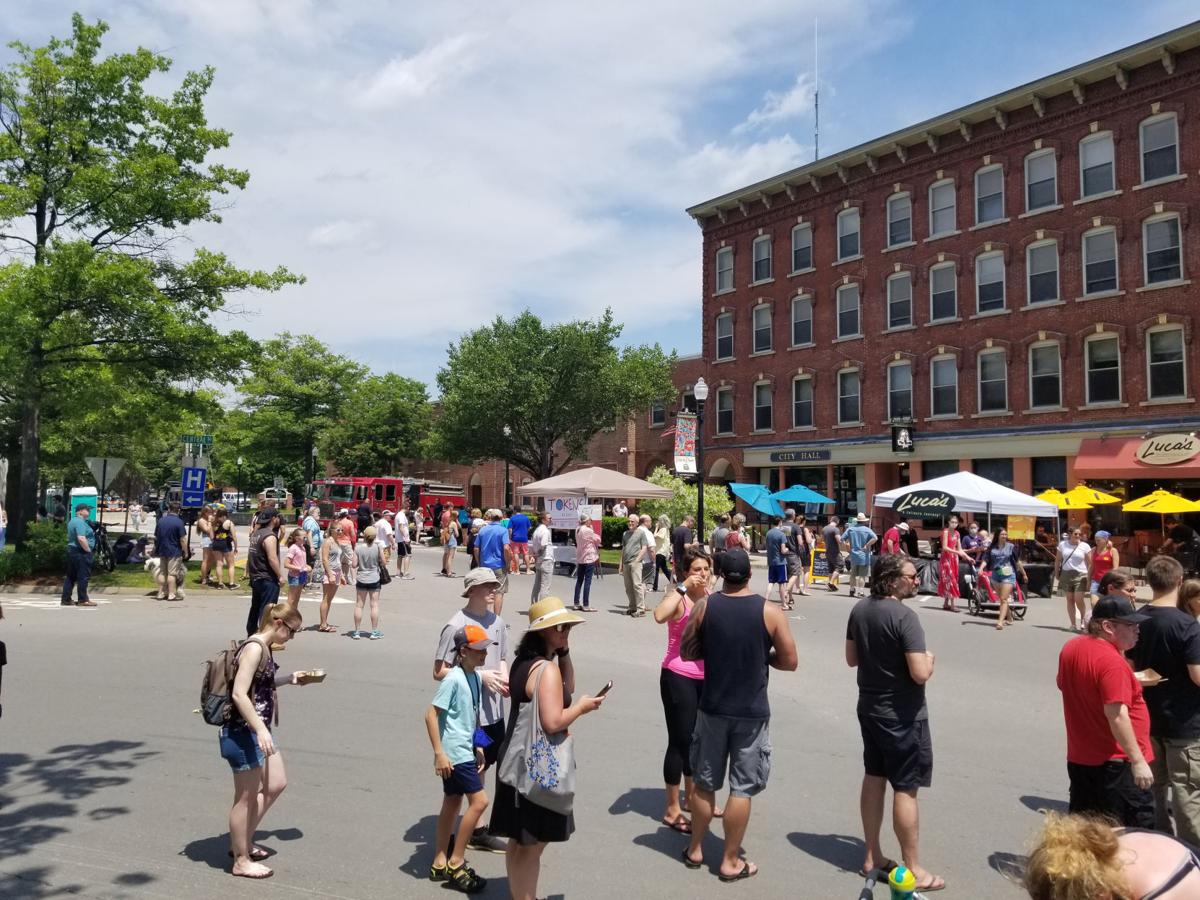 Well over 1,000 people came to downtown Keene on Saturday afternoon for the first-ever Taste of Keene. 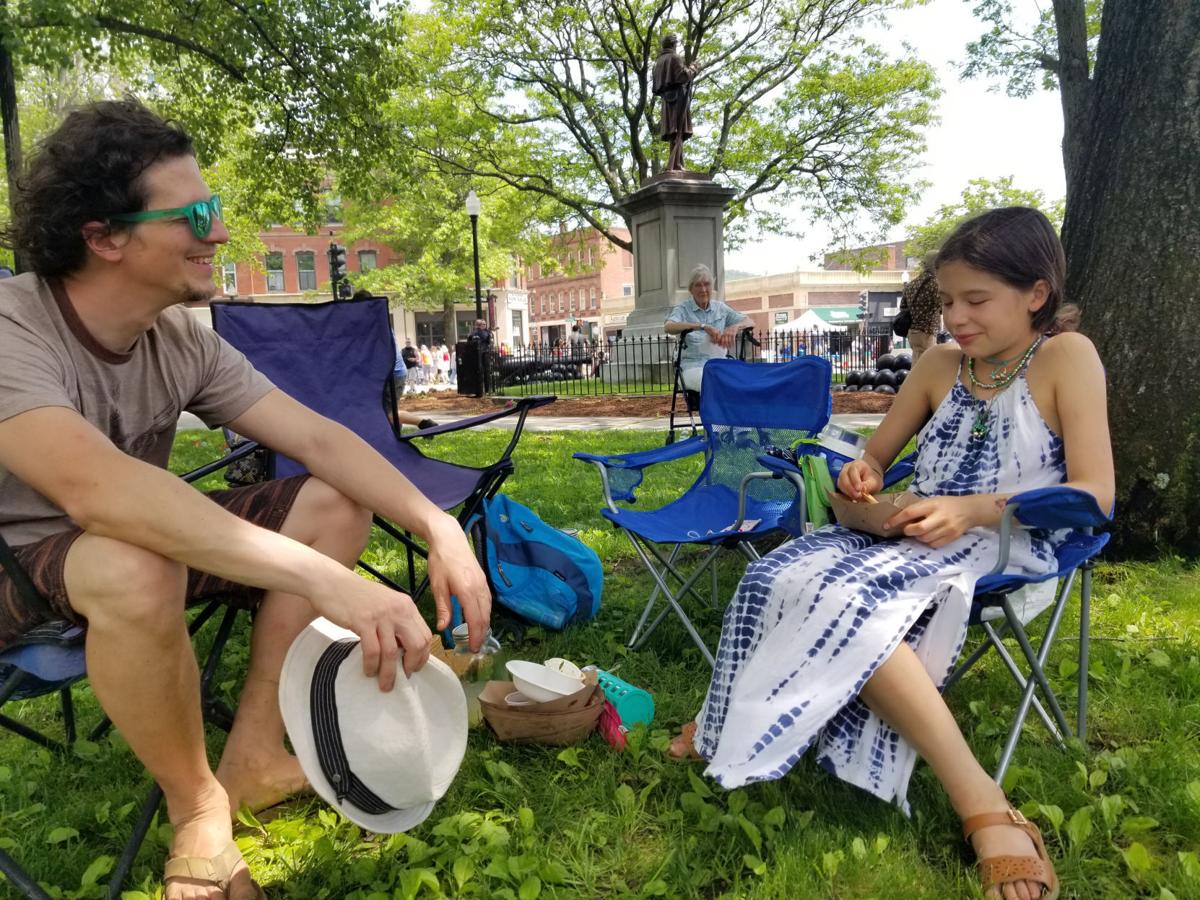 Jordan Cannon of Alstead and his 9-year-old daughter Estrella enjoy a spot in the shade in Central Square on Saturday afternoon during the Taste of Keene. 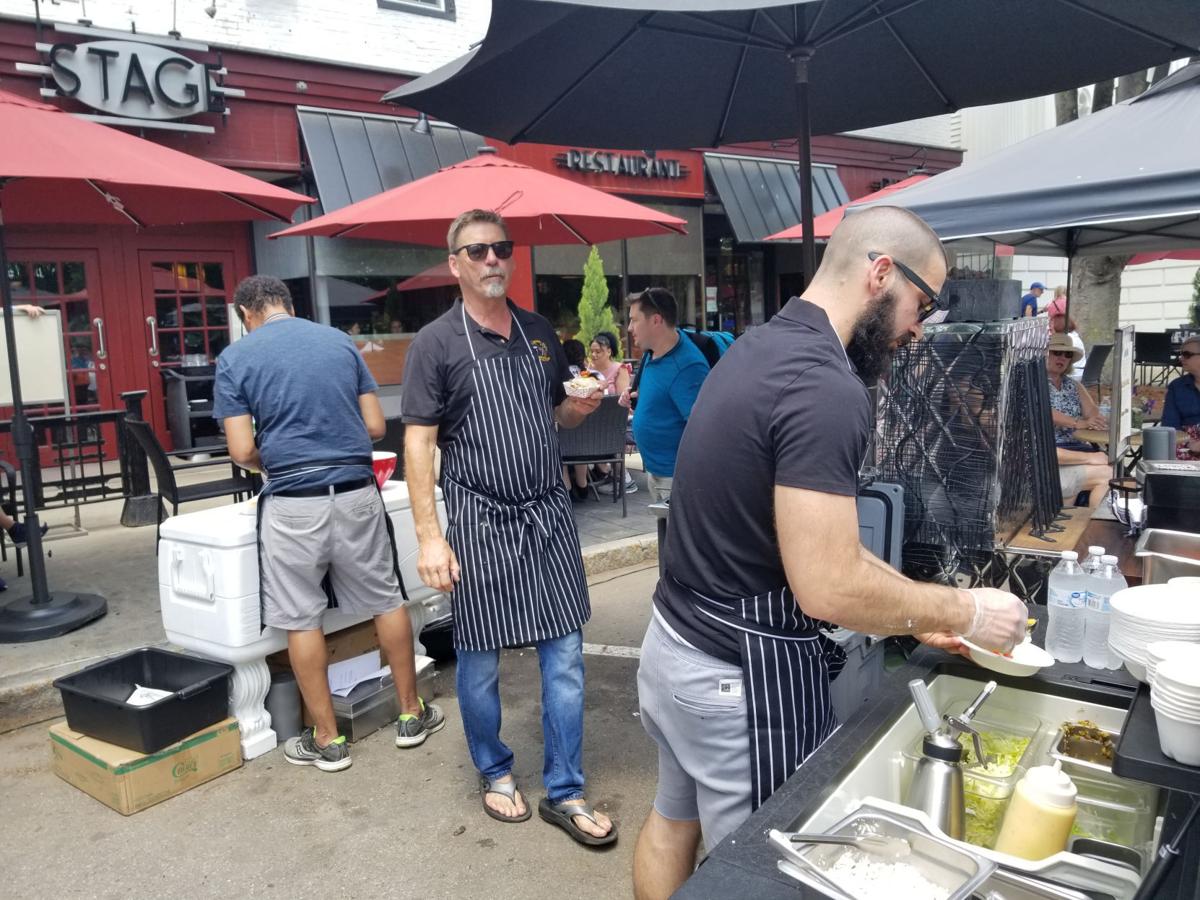 George (left) and Rudy Benik, whose family owns The Stage restaurant, serve up some food Saturday afternoon during the Taste of Keene on Central Square.

Jordan Cannon and his family don’t eat out often, but when they do, they typically make the trip to Keene from their home in Alstead.

“Our whole family loves to eat, and there’s lots of good restaurants here in Keene,” Cannon said Saturday afternoon during the Taste of Keene festival, adding that Thai Garden is a family favorite. His 9-year-old daughter Estrella sat opposite him on a camp chair in the shade of Central Square, snacking on Pad Thai from the nearby eatery.

The Cannons joined well over 1,000 other people for the food festival, which featured more than 20 local eateries, breweries and distilleries. Central Square was closed to traffic throughout the afternoon, allowing restaurants to set up tents in the street, and the crowd to stroll around and sample different food and drink.

“We come to Keene fairly often, and this is busier than it’s been since before [the pandemic],” Jordan Cannon said. “I can’t think of another community event that’s happened.”

The event started at noon, and by 1 p.m., it had already exceeded sales projections that predicted about 1,000 people would attend, according to Mike Remy, a city councilor and events coordinator for the Keene Young Professionals Network, which organized the food festival.

In the lead-up to the event, Remy said organizers envisioned it as a “grand reopening for downtown.” And under clear blue skies Saturday, he said the event lived up to that billing.

“It definitely feels like it,” Remy said. “It’s great to see people out and about and enjoying the outdoors, enjoying Keene’s downtown.”

Danielle Heeran of Spofford, who attended the event with several friends, agreed.

“It’s the first, like, normal thing that we’ve been able to do,” she said. “And it doesn’t feel uncomfortable because it’s outside. It feels safe, and good.”

Keene resident Chris Brehme was at home with his wife, Kristina Wentzell, Saturday afternoon when he got hungry, and she reminded him the festival was happening.

“We’re vegetarian and we found plenty to eat,” Brehme said. The couple added that they munched on a veggie plate from Yahso Jamaican Grille, cauliflower mac and cheese from The Farm Café and bar snacks from 21 Bar & Grill.

The event was free to attend, while food cost one to three tokens, which were $2 apiece. Restaurants offered small samples of their dishes, which allowed for festivalgoers to try multiple eateries. A beer garden was set up in the Hannah Grimes Center for Entrepreneurship parking lot on Roxbury Street, which also had a stage where several bands performed. Alcohol tastings were $2 each.

But more than the food and drink, Wentzell said, the atmosphere made the event.

The event drew more than just restaurant patrons. About two hours into the festival, a group of roughly 15 protesters marched through Central Square, waving Palestinian flags and chanting and speaking in support of freedom for Palestinian people living in Israel, after violence reignited in that region last month.

Beyond providing a safe and enjoyable community event, Remy said Taste of Keene was designed to spotlight local restaurants and bars, which have suffered during the pandemic. The festival raised more than $40,000 that will be distributed to the participating establishments, Remy said Saturday night.

“I think it’s really important to help people break the ‘I need to stay home mentality,’ and get out and really start to enjoy the food that we have to offer in Keene again and really get excited about what we have to offer,” he said. Remy added that Taste of Keene coincided with Keene ArtWalk, which began Friday and is celebrating its 30th year highlighting local artists with events through next Saturday.

With these events, and the warm weather, Eileen Benik, co-owner of The Stage restaurant on Central Square, said she was thrilled to see so many people out and about downtown.

“We’ve had a good showing. You never know with a new festival,” she said. “... I think people are ready to get out. We’re still just seeing now with the vaccines, we’re seeing customers we haven’t seen in a year come back now. So it’s been great. Some people came back right away, but to see our regulars come back after a year now that they feel safe has been wonderful, because we’ve missed a lot of our regulars.”