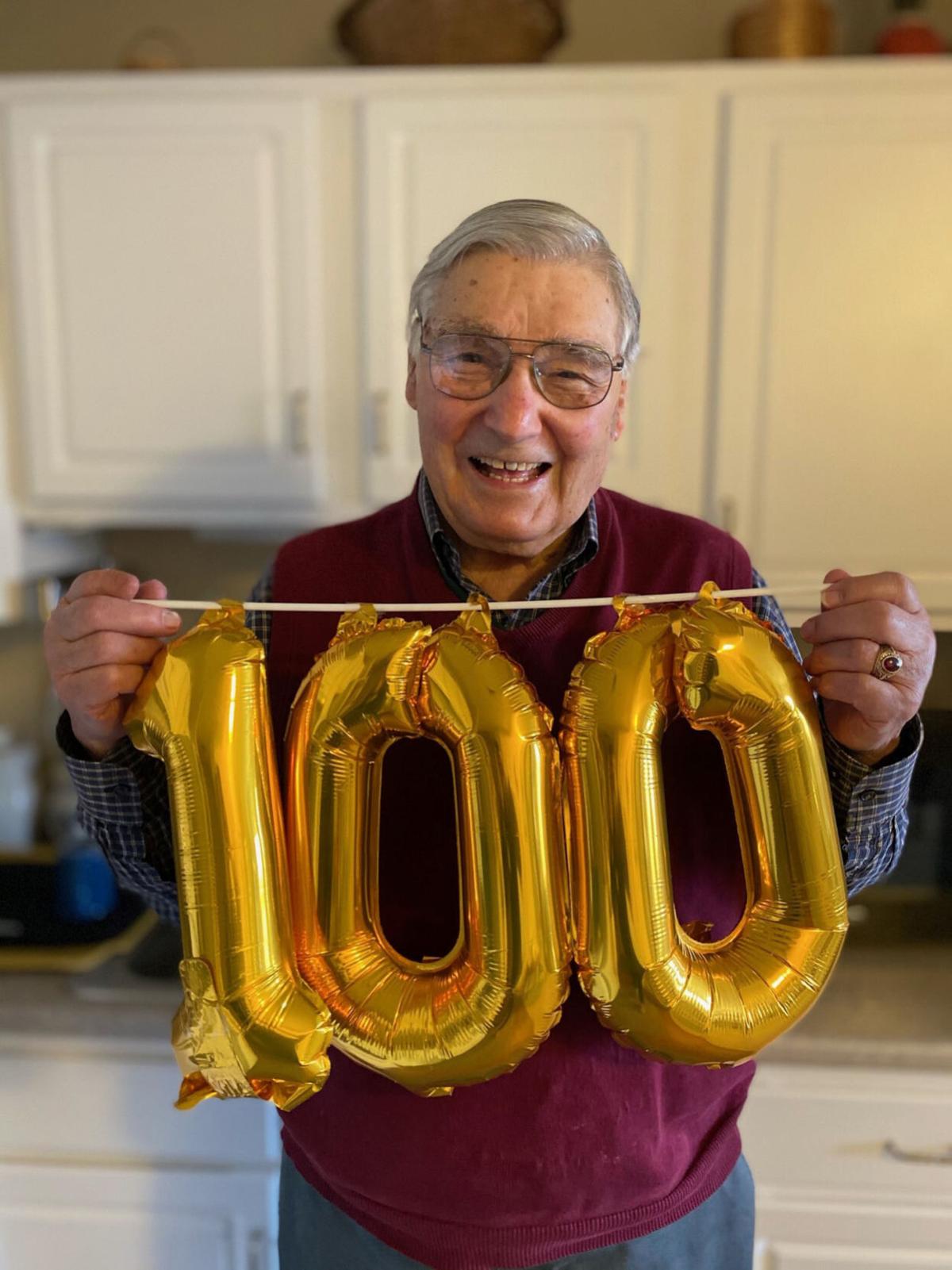 Julius Hof, who turned 100 on Dec. 4, credits his longevity to his mother’s good genes and positive outlook.

Sitting outside American House in Keene, Julius Hof waves to people who helped him ring in his 100th birthday on Dec. 4. 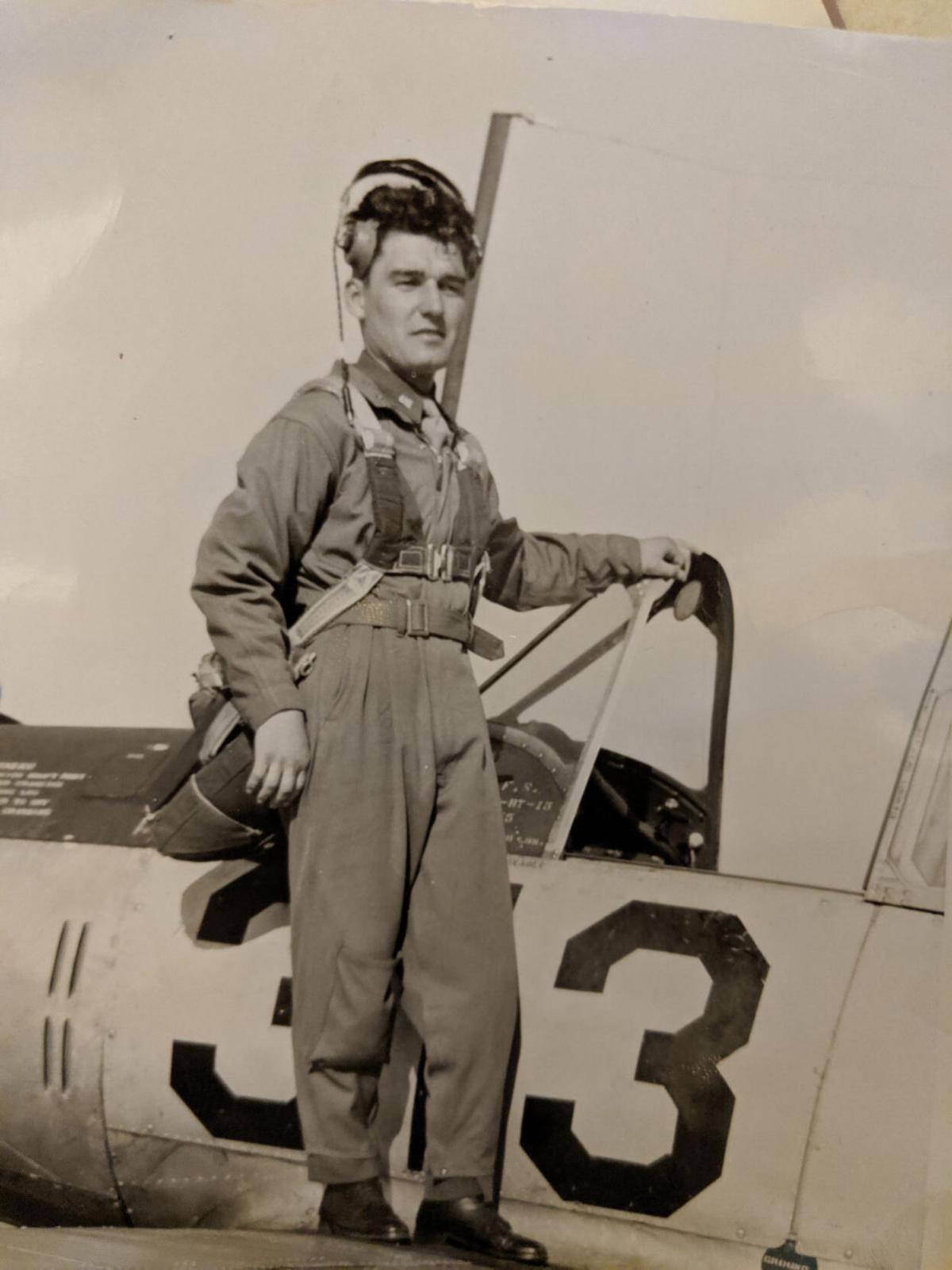 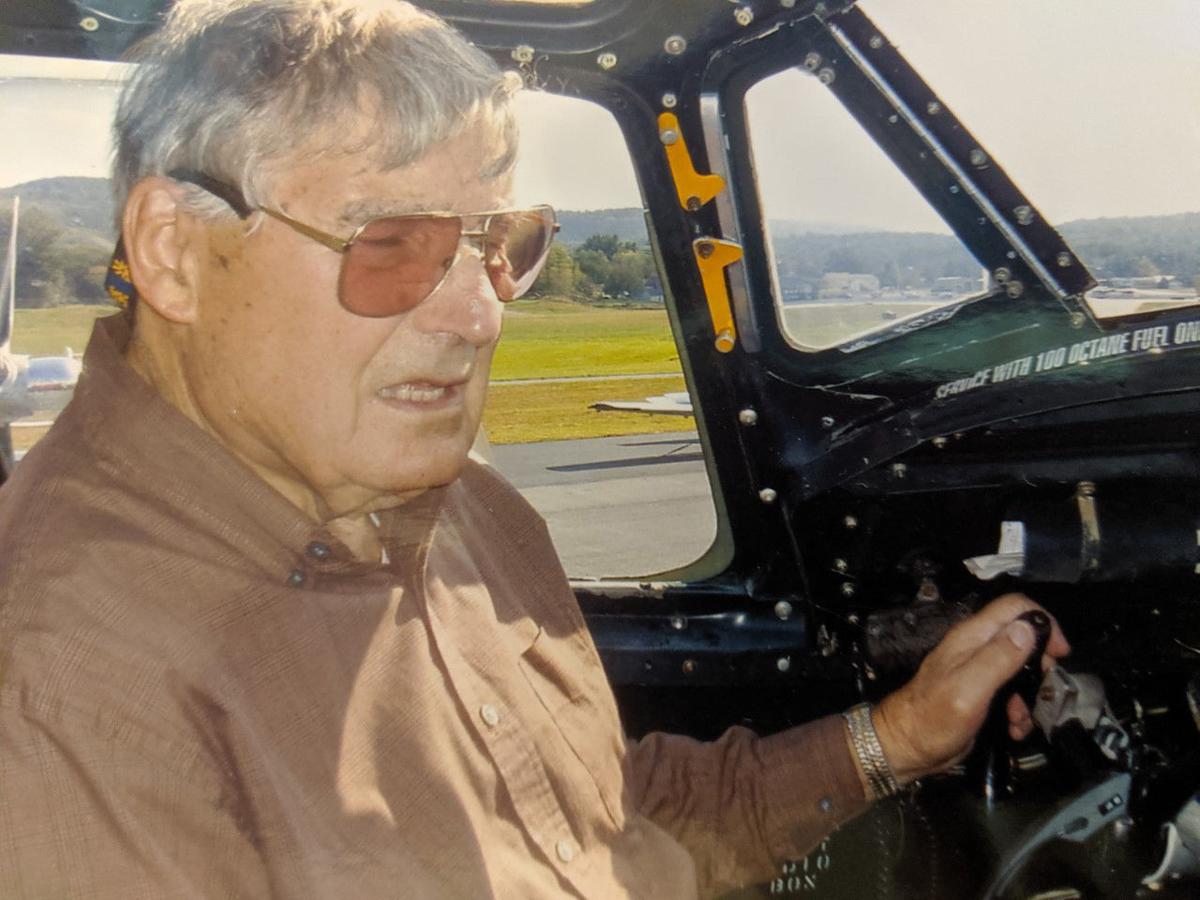 Julius Hof, then 96, sits inside the cockpit of a restored B-24 while it was parked at Keene’s Dillant-Hopkins Airport in North Swanzey four years ago.

Julius Hof, who turned 100 on Dec. 4, credits his longevity to his mother’s good genes and positive outlook.

Sitting outside American House in Keene, Julius Hof waves to people who helped him ring in his 100th birthday on Dec. 4.

Julius Hof, then 96, sits inside the cockpit of a restored B-24 while it was parked at Keene’s Dillant-Hopkins Airport in North Swanzey four years ago.

Last Friday, shortly after the lunch hour, Julius Hof seated himself in a comfortable chair outside the entrance of the American House retirement community in Keene, his son Bob standing proudly by his side. A car slowly rolled up in front of them, horn honking, festooned with balloons and signs wishing a happy birthday to the now-100-year-old.

Then another car drove by, followed by about 20 vehicles all decked out with well wishes for Hof, who waved to family and friends as they paraded by. Staff members of American House stood nearby — at a safe distance, of course — celebrating the birthday of one of their favorite residents. All was done in a manner compliant with the COVID restrictions in place at retirement communities.

“Oh, my gosh, they gave me such a big celebration,” Hof said in a telephone interview the following morning. “I’m still tired from it all.”

Despite his age, Hof is still in amazingly good shape, both mentally and physically. He needs no walker or wheelchair, lives independently at American House, and his mind is as sharp as when he was 40 years younger, family members say. He gave up driving only a month ago.

“You can’t put anything past him,” says Bob, 73 years old and a Keene resident.

As would be expected of someone who’s lived for a full century, Hof has a compelling story to tell that reflects back upon some of the major events in modern American history.

It begins by dialing back to Dec. 4, 1920, about 250 miles south of Keene in Hoboken, N.J., where he was born in a small apartment in the city that was, at the time, a gritty seaport crowded with immigrants from across Europe.

His father, Julius George Hof, had been born in Stuttgart, Germany, in 1898, and immigrated to the United States in 1914 at age 16, where he got a job with a tool-and-die manufacturer in Camden, N.J. His mother, Johanna Fabits, was born a year earlier in Austria near its border with Hungary. She arrived in the United States in 1913 to join her older sister Theresa in Philadelphia. Theresa would perish in the influenza pandemic of 1918.

Hof’s parents met at the German-American Club in Philadelphia, he says, and married in 1919. When he was 3 years old, his mother took him back to Germany to be with family there.

“At the time, there was a horrible housing shortage in the United States caused by the aftermath of World War I,” Hof explains. “My mother took me back for nine months while my father looked for a good place to live.”

Although his stay in Germany was short, the toddler learned to speak German while there. And when brought back to a new home his father had secured in Springfield, N.J., the child learned Italian from a playmate who lived downstairs from them.

During the 1920s, the family prospered as Hof’s father did well as a master craftsman in the tool-and-die industry, and they moved to a single-family home on three acres in Chatham Township, N.J.

But tough times lay ahead. In 1929, with the onset of the Great Depression, his father lost his job. His mother got a job at a grocery store on weekends, and his father could barely get even sporadic work, sometimes staying unemployed for up to six weeks at a time.

Hof has vivid memories of those years.

“Once, my father got a check for $25 for some work he’d done,” Hof says. The money was a godsend for the family, and they bought a holiday turkey, Christmas tree, presents and some badly needed clothes.

“The check bounced. We had to pay back everything.”

Another time Hof had secured a pair of old football cleats and cut the spikes off so he could wear them to school, “for want of anything better.” Occasionally, his mother would bring home a big block of cheese from the grocery store where she worked, and they’d keep it in the basement to preserve it longer. “When the cheese got down to the last chunks, it was hard as rock,” he recalls.

Hof eventually grew to detest kohlrabi, a cabbage-like vegetable that his mother grew in the garden and preserved for serving throughout the winter months. However, he says, he’s retained a lifelong love affair with cheese.

Despite the hardships, the family opted not to receive government assistance. “We were too proud to apply for it,” he says.

Because of these years of deprivation, Hof developed a lifelong sense of frugality.

“It takes me a long time to throw things away,” he says. His son backs him up.

“He’s very generous with others, but not himself,” Bob says.

After graduating from Chatham High School in 1939, Hof worked with his father in a factory producing cutlery. But in early 1940, he decided he’d enlist in the United States Army Air Forces, because it was offering a program to train aircraft mechanics. He was sent to a base in Rantoul, Ill.

“Everyone knew that we’d eventually be involved in a war,” Hof says.

After his training there, he was assigned to a base near Chicago, and then slated to be shipped to Pearl Harbor. But instead of ending up there, he’d taken an aptitude test, and it was decided he was better suited for flight school at Shaw Airfield near Florence, S.C. There, during training, he showed considerable talent piloting the Army’s small bomber, the twin-engine B-25, nicknamed the “Billy Mitchell” after one of the pioneers in American military aviation.

While stationed there, he met his future wife, Doris “Dot” McClam.

“We had a day off, which was very unusual, and a friend asked if I’d like to go with him to Florence; he’d met a girl up there at a USO dance. So, we went, and this girl had a friend with her, and that was Doris,” he says.

“I remember exactly what she was wearing — a letter sweater and a blue skirt and bobby socks. She looked like a high-school cheerleader. My friend, he got left out in the cold, but I met my wife.”

The two struck up a relationship, and Hof was introduced to the McClam family at their farm in nearby Lynchburg, S.C., where her father joked that Hof was the first “New York Yankee” to visit their home.

After Pearl Harbor, there was a desperate need for military pilots, and Hof was sent in June 1942 to an airfield in Liberal, Kansas, to train prospective aviators in flying the new long-range B-24 bomber, better known as the “Liberator.”

The couple conducted a long-distance relationship while Hof trained pilots. In all, he spent 3,000 hours flying B-24s, training new pilots. The experience was not without some panicked moments as novice co-pilots made some horrible mistakes — including once when one applied the brakes instead of the throttle midway through takeoff. According to the Warfare History Network, during World War II more than 13,000 American aviators lost their lives in training accidents at home before they ever faced the enemy. The B-24 in particular, ridiculed by pilots and crew members as the “Flying Boxcar,” was a very difficult plane to fly because of its awkward aerodynamics, Hof says, and it was prone to accidents.

In 1944, Dot boarded a train and traveled to Kansas, and the couple was married July 9. A year later, two months after VE Day, a daughter, Karen, was born. Twins Bob and Philip were born in 1947.

Hof remained on active duty in the United States Air Forces until 1947, and was mustered out at the rank of captain. Among his duties after the war was ferrying surplus B-24s to scrap yards. (A total of 18,000 of the aircraft were manufactured.)

Hof remained in the Air Force Reserves until 1975.

“Not bad for someone who enlisted as a buck private and ended a career as a lieutenant colonel,” he says.

At the end of active duty, Hof contemplated a future career as an airline pilot.

“My wife said there’d be no more flying for me,” he says, “so that was that.”

Instead, Hof went into partnership with his father and brother Arnold and started a tool-and-die company, Julius Hof & Sons, in Berkeley Heights, N.J., in 1947.

The business prospered in the post-war years, Hof says, with much of its activity related to cutlery. One of its big breaks was a close relationship with Charles Revson, founder of the Revlon Corporation, who asked the Hof family if it could begin manufacturing dies for Revlon’s manicure division. This work eventually led to producing highly specialized surgical equipment.

By 1974, their company began entertaining offers from larger companies, and they decided to sell to Johnson & Johnson.

After staying on for another five years managing the firm for J&J, Hof and his brother retired in 1979.

In 1980, his twin sons, who had worked at their father’s company, purchased the forging division of Millers Forge in Keene, renaming it New Hampshire Forge, and both moved to the Elm City. The company was first off Pearl Street and then relocated in 1998 to its present site at Black Brook Industrial Park in West Keene. It remains a leader in the tool-and-die and manufacturing industry for both the cutlery and surgical tool markets.

Julius and Dot moved to Swanzey in 1985 to be closer to their sons and grandchildren. The couple also became involved in the antique business, operating estate sales and maintaining a booth at the Colony Mill Antique Store.

As they entered their late 80s, Dot Hof began to develop serious medical issues, and Julius became her caregiver. Eventually, they moved to Bentley Commons (now American House). Dot died in July 2016, at age 92, and Julius has maintained a steady schedule of visiting her grave at Monadnock View Cemetery in Keene four times a week.

Hof is content with his life, and proud of his longevity, which he credits to “my mother’s good genes and her very positive outlook on life,” he says. “She was an optimist.” She lived to age 98.

And Hof has some advice for younger people.

“Two things: Get a good education; they can’t take that away from you. And don’t try to rule the world. Just take care of yourself and help other people.”

At a glance: Julius Hof