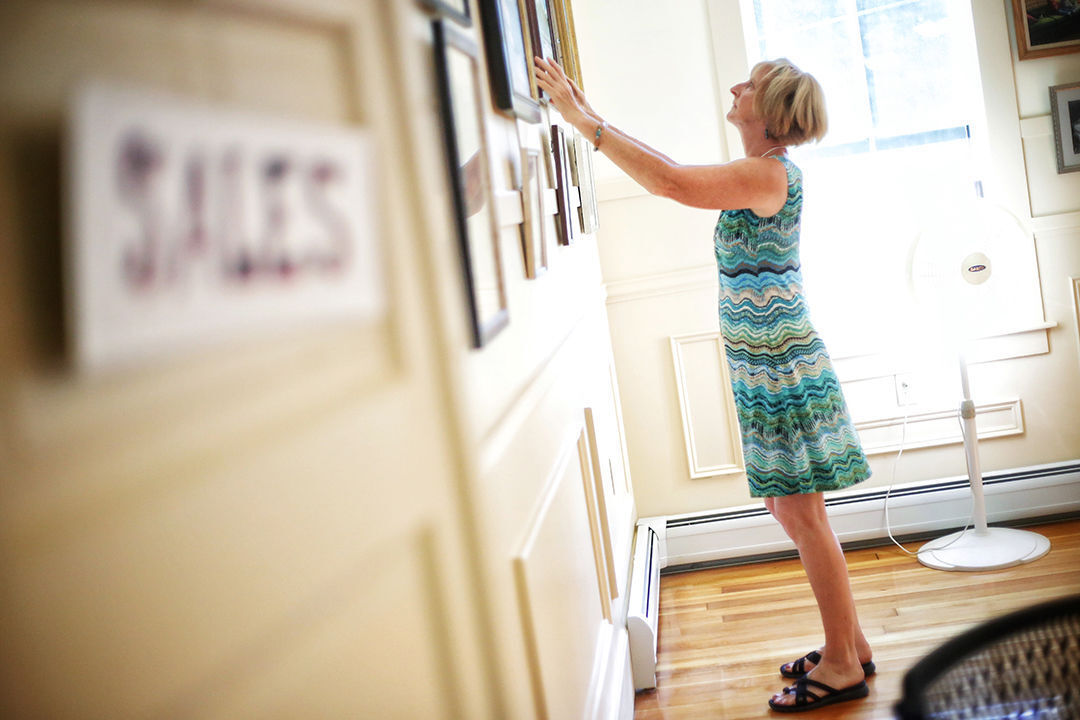 Jeanne Thieme puts the finishing touches on an art exhibit in Swanzey’s Chapman Hall in this file photo from August 2016. The exhibit featured the work of artist Deb Crowder, and Thieme was in charge of sales for the event. 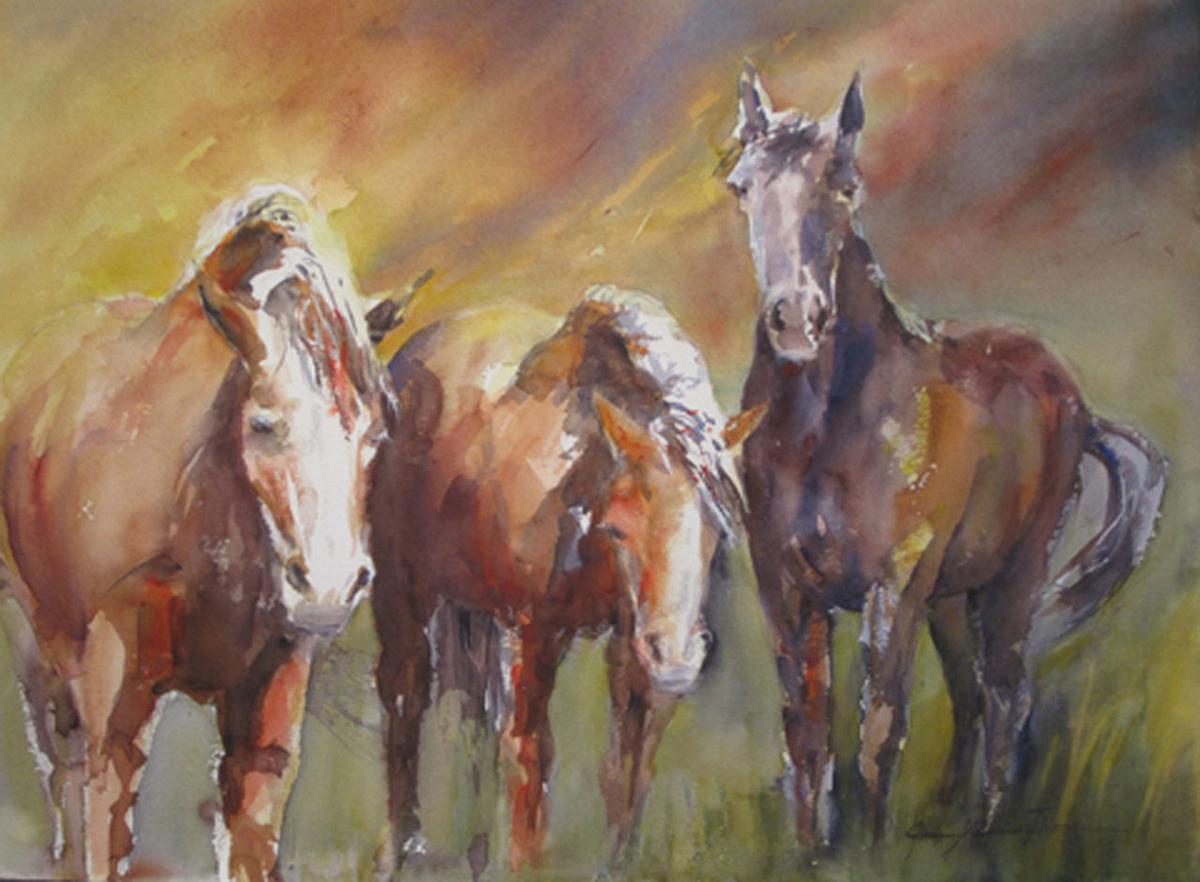 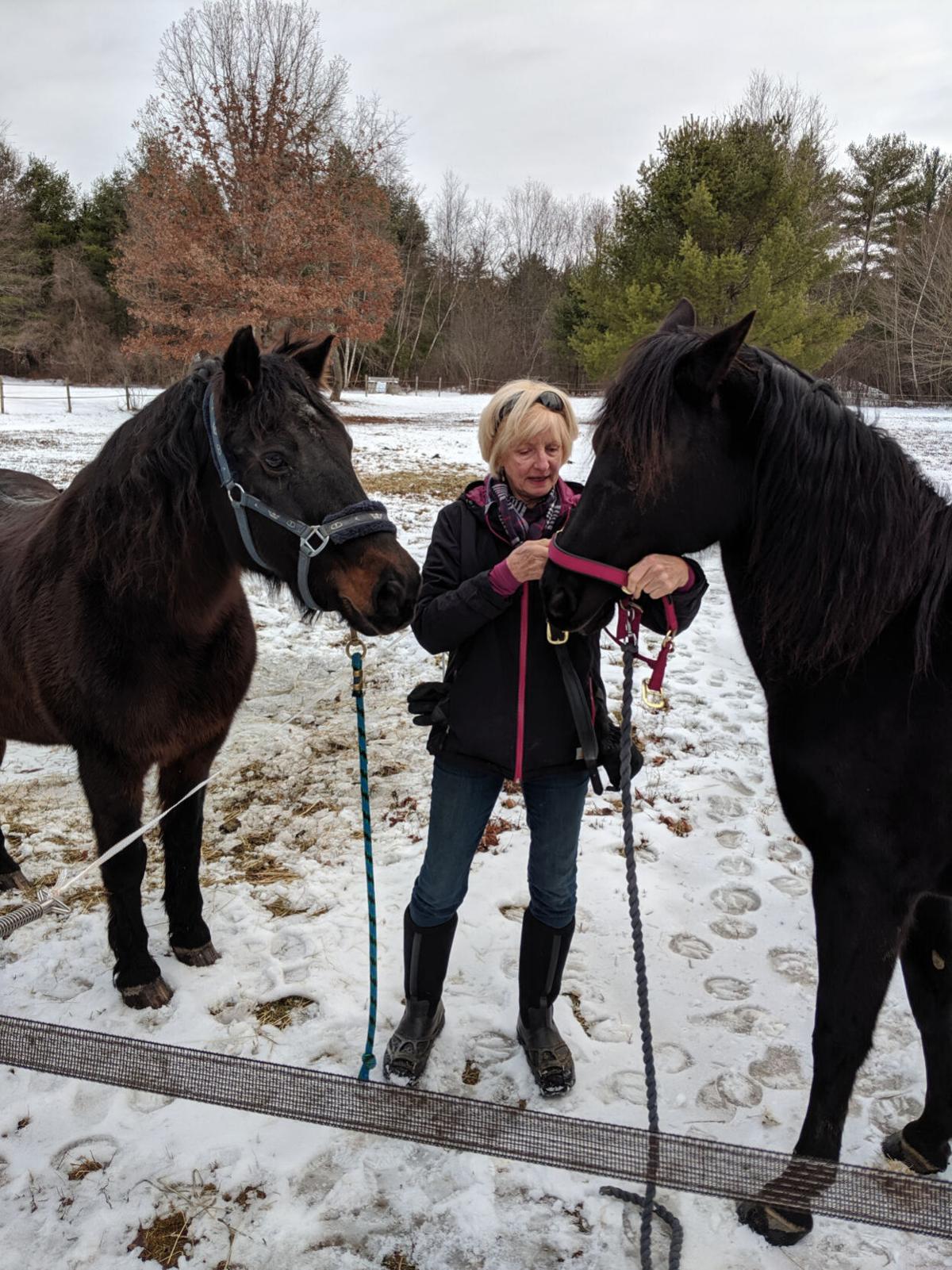 “When I was a kid, all I wanted to do was draw horses and live on a farm,” says artist Jeanne Thieme of Swanzey, shown here with horses Mick and Inga. 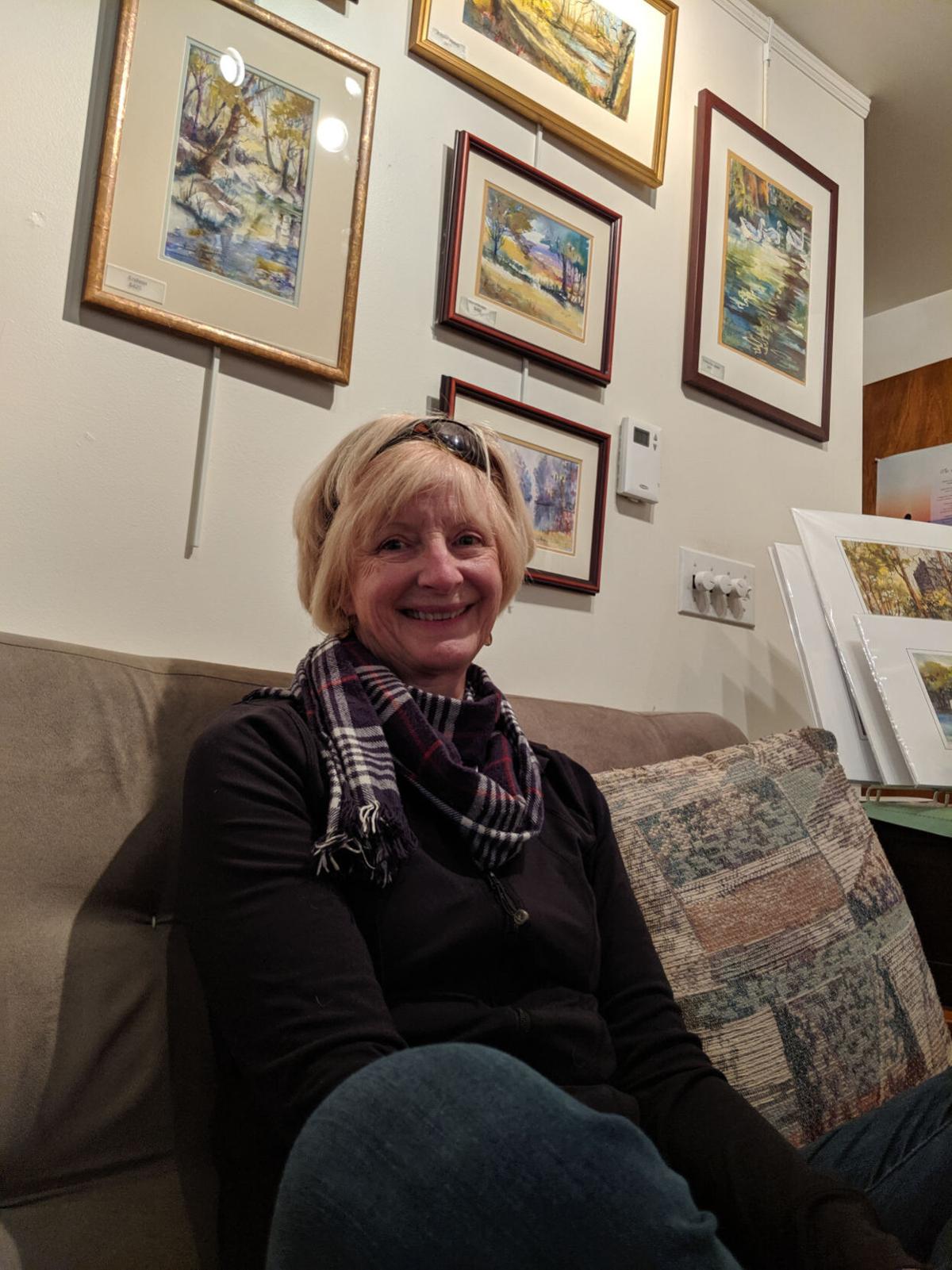 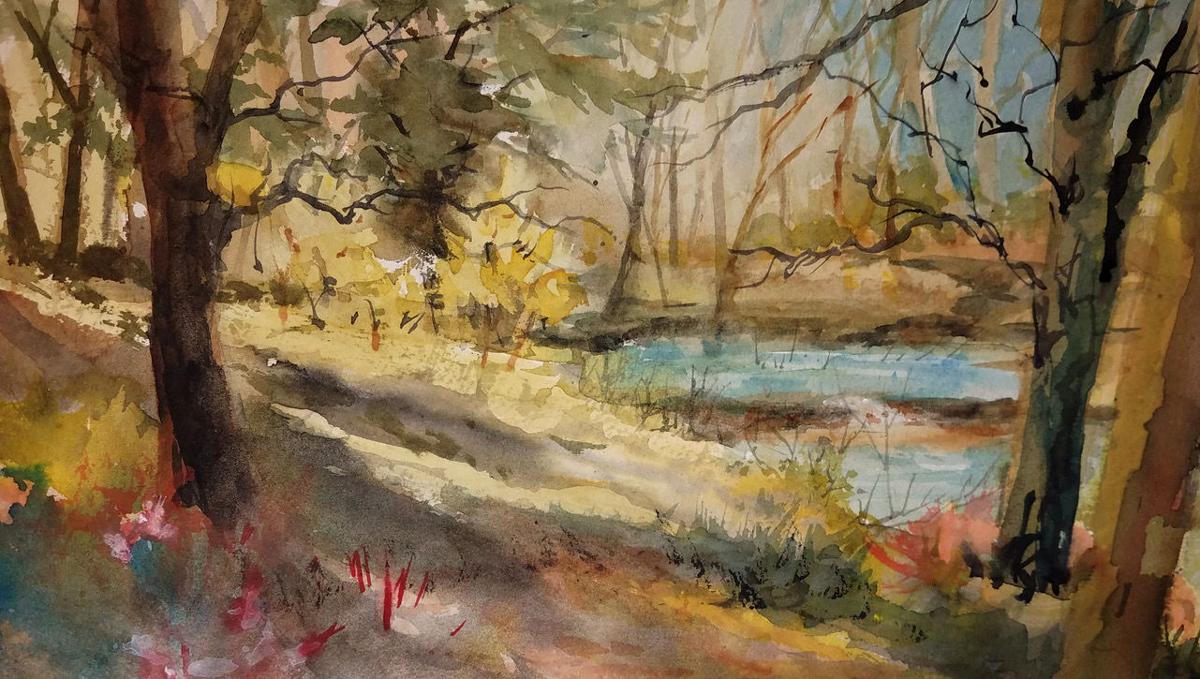 Jeanne Thieme puts the finishing touches on an art exhibit in Swanzey’s Chapman Hall in this file photo from August 2016. The exhibit featured the work of artist Deb Crowder, and Thieme was in charge of sales for the event.

“When I was a kid, all I wanted to do was draw horses and live on a farm,” says artist Jeanne Thieme of Swanzey, shown here with horses Mick and Inga.

SWANZEY — Jeanne Thieme walks onto the snow-covered field across from her home here. The sun will set in about a half hour, and her two horses mosey on over to her, knowing it is time to be led to the barn for the night, safe from the winter’s chill, anticipating their nightly feeding.

“There, there,” she says as she gently leads Mick, a 27-year-old Morgan into the barn, followed by Inga, a younger Morgan.

She then returns to her house, the place she and her husband, Mike, bought when they first arrived in Swanzey in 1981 from New Haven, Conn., a young couple yearning to leave the big city and start a life together in a bucolic, rural setting. They named it Pipe Dream Farm for what it represented to them — a fanciful idea for their future.

“When I was a kid, all I wanted to do was draw horses and live on a farm,” says the lithe and vibrant 70-year-old, a long-time regional artist who has established a national reputation as a watercolorist and operates Pipe Dream Studio from her home.

The evolution of how this all came to be involved many steps, starting with her formative years in the suburbs of Chicago, where she developed an overwhelming urge to draw, especially scenes with horses.

“When my parents saw my appetite for drawing, they asked an artist friend about it, and she told them to just wind me up and let me go and provide plenty of paper and pencils.”

Thieme, the eldest of six children of Raymond and Joan Maguire, continued to draw after the family moved to Stamford, Conn., when her father was promoted by Champion International Corp., now part of International Paper Co. She was 10 years old at the time.

“I don’t know where my interest in art came from,” she says. “My parents weren’t artists, and none of my brothers or sisters showed any interest.”

Nevertheless, her love of animals and of art continued to expand in tandem.

“In Stamford, I used to ride my bike for miles to see a horse,” she recalls.

When she was 12, she submitted one of her paintings — of flowers — to an art show in Stamford. “I remember going with my dad to go pick it up after the show, and the lady at the table handed me $10 and said it had been sold. I was shocked, amazed, delighted. I went right home to paint some more. There’s nothing like selling a painting to motivate you to paint again.”

Her interest in art continued through high school, and she elected to attend a fifth year at Stamford High School in a special program for budding artists. After graduating, she enrolled in Southern Connecticut State University and earned a bachelor’s degree in art education. Then she supported herself by waitressing and doing freelance work with local art studios in New Haven, then onto a job as production manager at a weekly newspaper in Stamford.

It was in Stamford where she met her future husband, who at the time was working with his father, who owned a plumbing company. They married in 1979, and the two began working as caretakers at an estate in the area.

“We found the area too expensive to buy a house, and we both had this rural thing going on. We had good friends in Westminster, Vermont, and my aunt [Frances Reinke, now deceased] lived in Keene, so we came here. We just left Connecticut.”

A Keene real estate agent showed them the Swanzey property, located near the Richmond town line.

“We just stretched and stretched; we had no jobs,” she says, but a local banker agreed to give them a mortgage because he felt the couple’s background — she as a graphic artist and he as a plumber — made them an acceptable credit risk.

As her husband established his plumbing business, she took on freelance jobs with local art studios as they raised two daughters, Emily and Molly. They expanded their home, added a barn, and purchased a pasture across the street for use by their horses.

“We had chickens, rabbits, sheep, gardens. It was just what I envisioned at 5 years old.”

She was hired by Keene High School to teach two art courses, and eventually was asked to work there full-time.

“I discovered that I was really good at teaching, and I learned a lot from the teenagers. I learned everybody has a creative side; everyone can pick up a paintbrush and do something with it,” she says. “I loved to see the lightbulb going on in the kids’ heads. In teaching high school students, I had to develop a culture in the classroom so everyone could feel safe in creating; you need a culture that is open.”

After 13 years there, at age 50, she quit to pursue a career as a professional artist.

She began by building up an inventory of paintings and then with the help of her husband, started the arduous task of marketing her work at exhibits throughout New England, New York and New Jersey.

Her first show on the road was a humbling experience.

“I brought my work and thought it just looked beautiful. I sat there for two days and didn’t sell anything,” she says.

She persevered, though. “We took our tent, and I entered juried shows, and I learned about pricing, framing and marketing.”

Then, gradually, her work started to sell, although it remained hard labor in sometimes difficult settings.

“I was displaying my work at a flower show in Providence, and they placed me next to a booth where a guy was shouting from a microphone, selling potato-peelers. I don’t have anything against potato-peelers, but it wasn’t such a good place to sell my paintings.”

Even the best artists encounter fallow times when it comes to selling their work, she explains.

“Sales can be heartbreaking,” she says. “But the sign of a true professional artist is the ability to keep painting even when there are no sales. Artists call this ‘painting the blues,’ and nobody rides for free; even the great artists go through that.”

Eventually, what she calls the “missionary work” of marketing her paintings began to pay off. She started to win awards — including the Thomas Moran Memorial Award for outstanding work in watercolor at the 36th annual Painting and Sculpture Juried Exhibition in 2014 at the Salmagundi Club in New York City, one of the oldest and most prestigious art organizations in the United States.

“I started to develop a following,” she says, with customers seeking her out, showing up at her studio to view her work. This allowed her to throttle back on the number of shows where she displayed her paintings. During this time, too, she began offering classes to novice painters, which she still offers.

Although she has painted with oil, she’s predominately a watercolor artist, her works reflecting scenes that display her love of nature and animals in rural settings, many of which are based upon the local environment in and around Swanzey.

“Many scenes are from what I see on horseback,” she says. “I ride a couple times a week, and there is nothing better than seeing things from a horse. It’s a very private experience; you are part of the environment.”

She favors painting outside — what is called plein air painting.

“… when artists step out into nature we are transformed,” she writes on her webpage. “Here we become more aware, our sense of smell, hearing, sight and touch are all heightened by everything that surrounds us.”

She sells only original paintings with the exception of reprints she’s produced of works inspired by scenes from her travels to Ireland.

“My prices aren’t so high that people can’t own an original,” she says.

She also encourages people to critique her paintings.

“I love to get feedback on my work; I’ll drag someone in off the street and ask them what they think,” she says. “You don’t have to be an artist to give feedback to an artist.”

Thieme paints primarily in the morning and early afternoon, and often has two or three paintings in the works simultaneously. “You live with it for a while, then look at it again.”

Many customers ask her how long it takes to paint a particular piece.

“I tell them 50 years. It’s really about sweat equity; you really have to put work into it.”

At a glance: Jeanne Thieme