Patrick Roche, director of innovation for Good Energy in New England, listens while Emily Manns, community power consultant for Standard Power, delivers her part of their presentation at Swanzey’s first of two public hearings to draft their power plan at Whitcomb Hall on Wednesday evening. 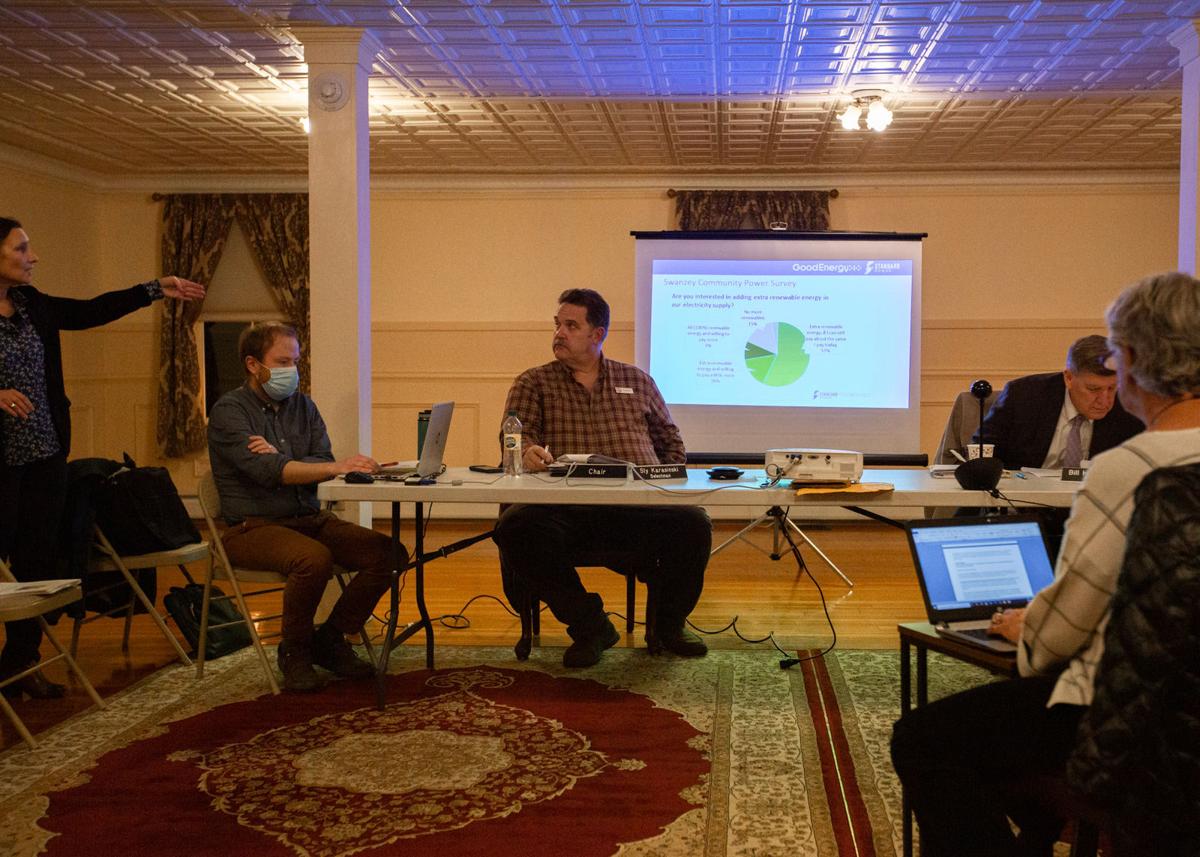 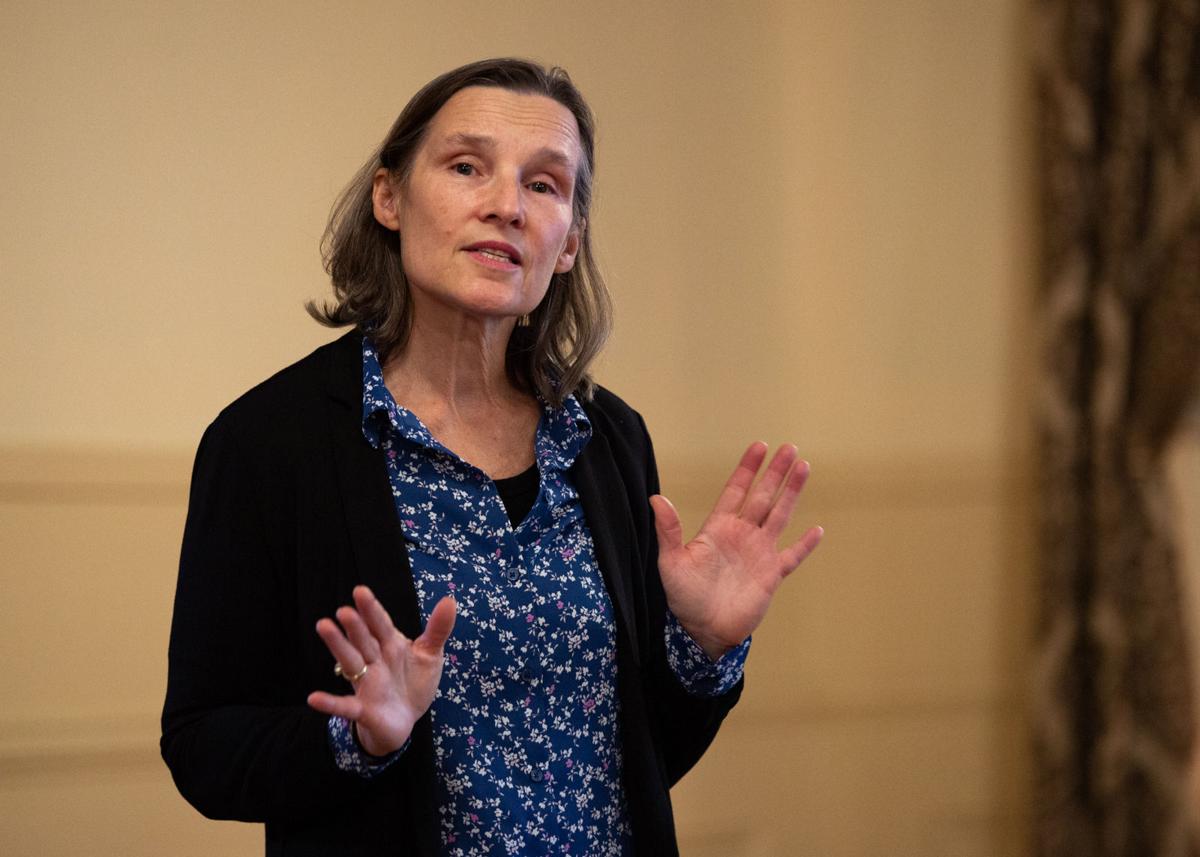 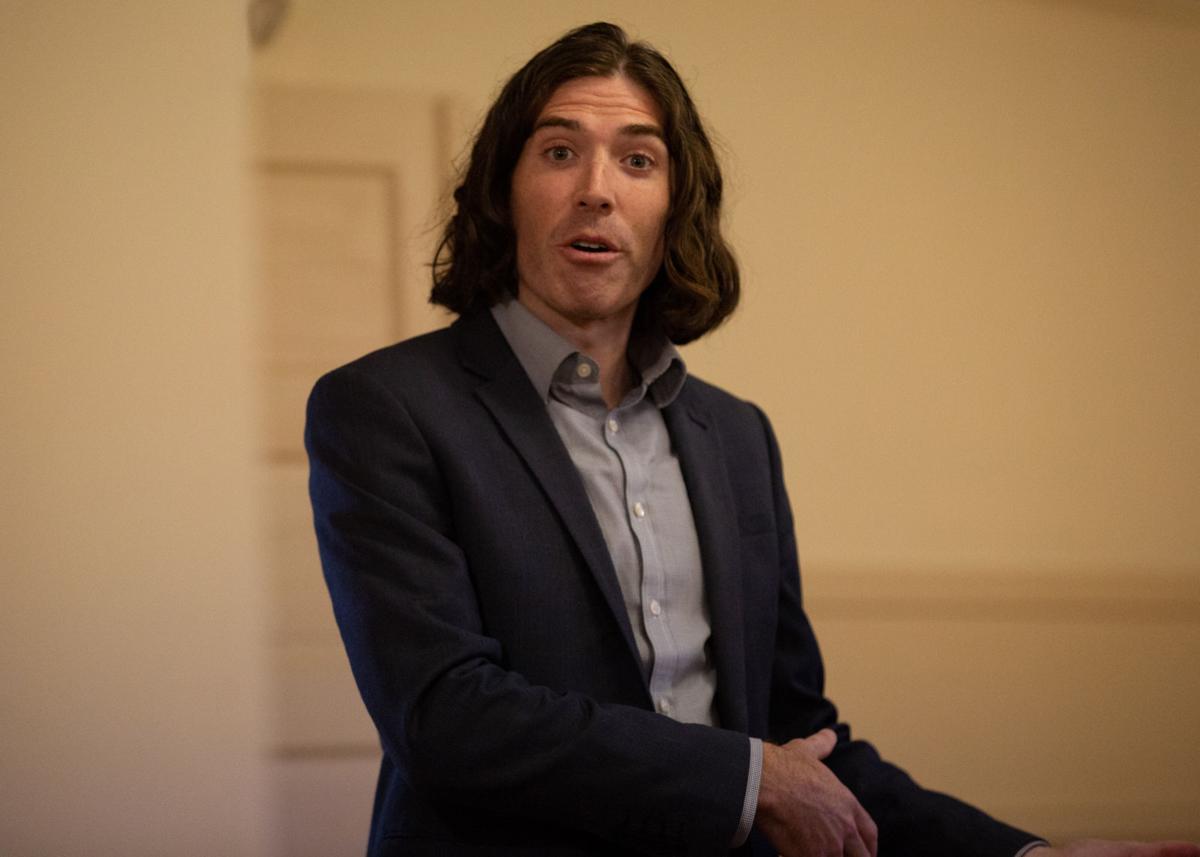 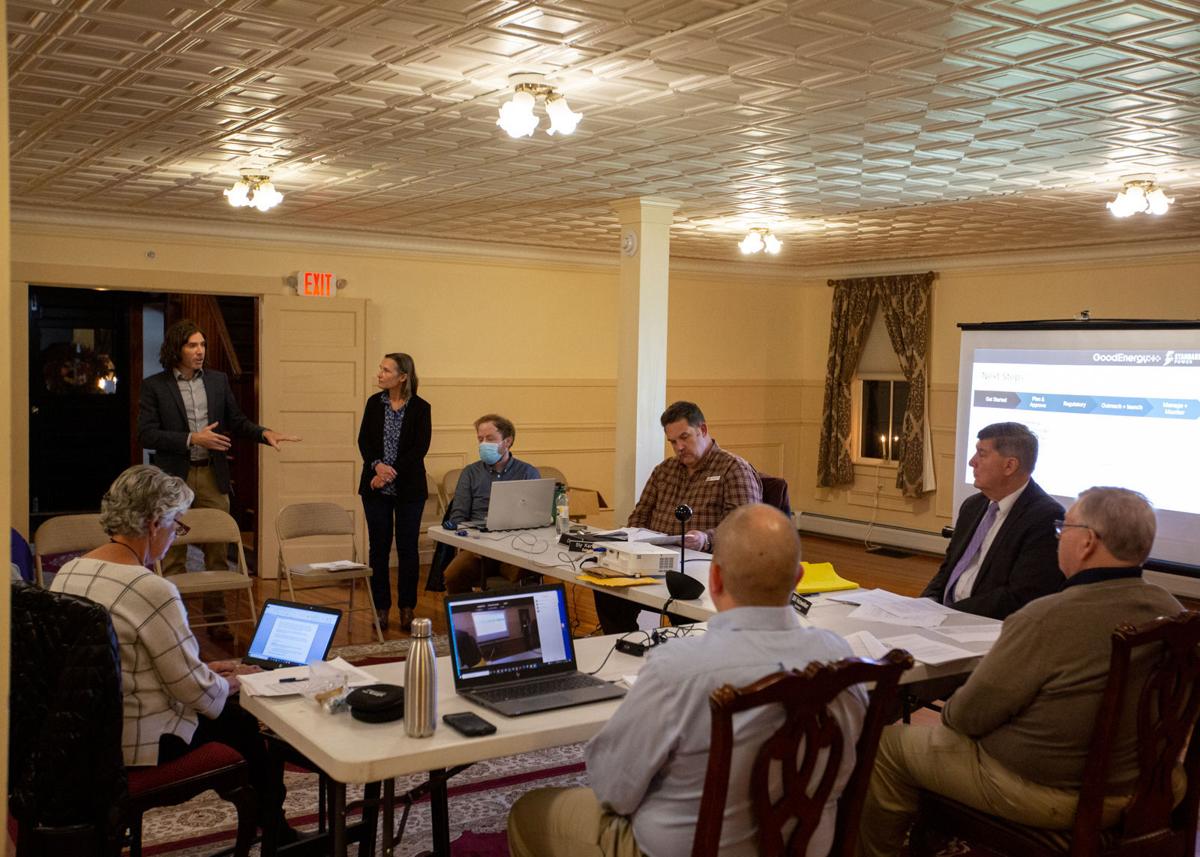 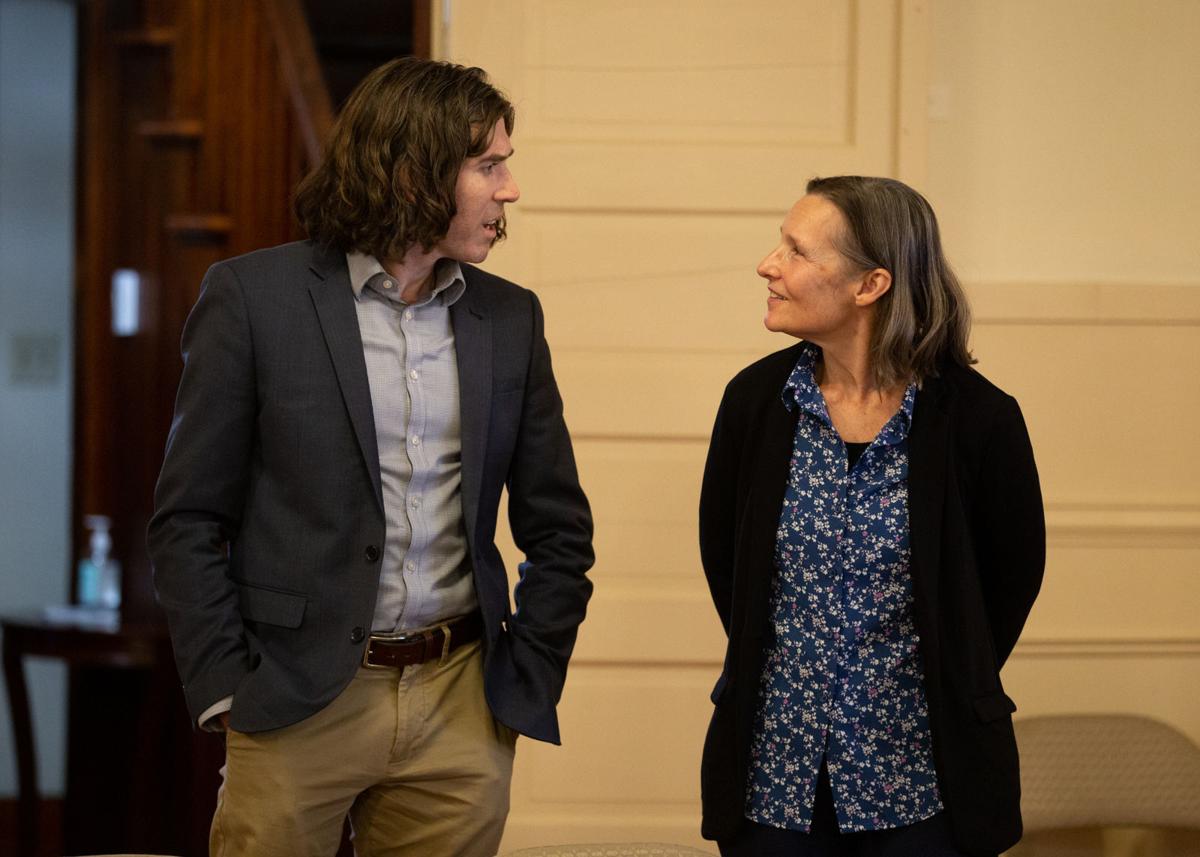 Patrick Roche, director of innovation for Good Energy in New England, listens while Emily Manns, community power consultant for Standard Power, delivers her part of their presentation at Swanzey’s first of two public hearings to draft their power plan at Whitcomb Hall on Wednesday evening.

WEST SWANZEY — What should power homes and businesses in Swanzey? That question could be on the town meeting ballot in March.

Like many other municipalities in New Hampshire, Swanzey is considering adopting a community power aggregation plan. That would make the town the default electricity provider for local customers.

“This is a new program in New Hampshire, but there are hundreds of programs around the country and dozens of programs in New England,” Emily Manns of the Nashua-based consulting firm Standard Power, which is working with the town, said at a public hearing Wednesday evening.

She explained that communities like these programs for two main reasons: competitive prices and the ability to add more renewable energy to the mix.

Swanzey’s volunteer Community Power Committee, formed by the selectboard, has been meeting since March. Working with Standard Power and another consulting firm, Good Energy, the committee conducted a survey and developed a draft plan.

After considering public input from Wednesday’s session and another public hearing — scheduled for Dec. 8 — the committee will submit a final plan to the selectboard. If the board approves, it would go to the voters in March.

While a utility like Eversource is the default supplier of power, customers have the option of selecting a different supplier — but don’t have much leverage on their own, said Patrick Roche of Good Energy, who was also at Wednesday’s hearing.

With community power, the municipality pools the demand from all those customers, giving it more purchasing power. Customers are automatically enrolled, though can opt out. (The utility continues to deliver the electricity and manage the infrastructure.)

The default product would have a rate comparable to Eversource, while including a bit more renewable power than the utility is required to under New Hampshire law — around 22 percent this year. Swanzey’s default product is expected to include an extra 5 to 10 percent more than that.

Another product, the “basic” option, would be the cheapest. It would include only the required amount of renewables, at a more competitive price.

For customers who want more clean energy, two other options would come with substantially more renewable energy — up to 50 and 100 percent extra, respectively — at somewhat higher rates.

The Community Power Committee’s work was informed by its survey of residents, Manns said. One question asked whether they wanted more renewable energy.

Those categories correspond to the four choices described in the draft plan, she said.

Another question asked what residents hoped to get out of a community power plan. The top reason, listed by 78 percent, was lower electric bills; 57 percent said local control and 56 percent said more renewable energy.

About eight people, including members of the Community Power Committee, attended Wednesday’s hearing, which lasted a little over a half-hour. It was held at Whitcomb Hall and also streamed online via Zoom.

Manns and Roche fielded a handful of questions on details about the proposed program.

Asked how rates might compare to Eversource, Roche pointed to the example of Somerville, Mass. That city’s default option has tended to be cheaper than the utility’s default rate, despite containing more renewable energy.

“We’re looking to be lower over the term of our contract,” Roche said. “… There may be a six-month period where we are not lower than the utility, but looking over the term of the contract, we come out ahead.”

In the event of an outage, Manns noted, customers would still call Eversource. “The infrastructure remains with the utility,” she said.

Electricity bills would also come from Eversource, but the supply portion would say Swanzey Community Power.

Since the N.H. Legislature opened the door to community power programs in 2019, multiple Monadnock Region municipalities have shown interest.

In May, Keene became the first in the state to adopt such a plan, followed closely by Harrisville, though the plans will require approval from the N.H. Public Utilities Commission before becoming operational. That hasn’t happened yet; the PUC began the rule-making process for community power aggregation plans last month.

Marlborough has formed a Community Power Committee that is gathering feedback from local residents with a community power survey. Peterborough, which has committed itself to transitioning to 100 percent renewable electricity by 2030, has its own Community Power Task Force.

Meanwhile, Cheshire County recently joined with 13 New Hampshire towns and cities — including, locally, Harrisville and Walpole — to form the Community Power Coalition of New Hampshire, a so-called joint powers agency. Members intend to benefit from economies of scale, including by sharing administrative services and pooling their bargaining power to solicit bids, while keeping local control over their own power programs.

The next public hearing on Swanzey’s draft community power plan is scheduled for Dec. 8 at 6 p.m. in Whitcomb Hall. Written comments can also be submitted to Matthew Bachler, director of planning and economic development, at mbachler@swanzeynh.gov.