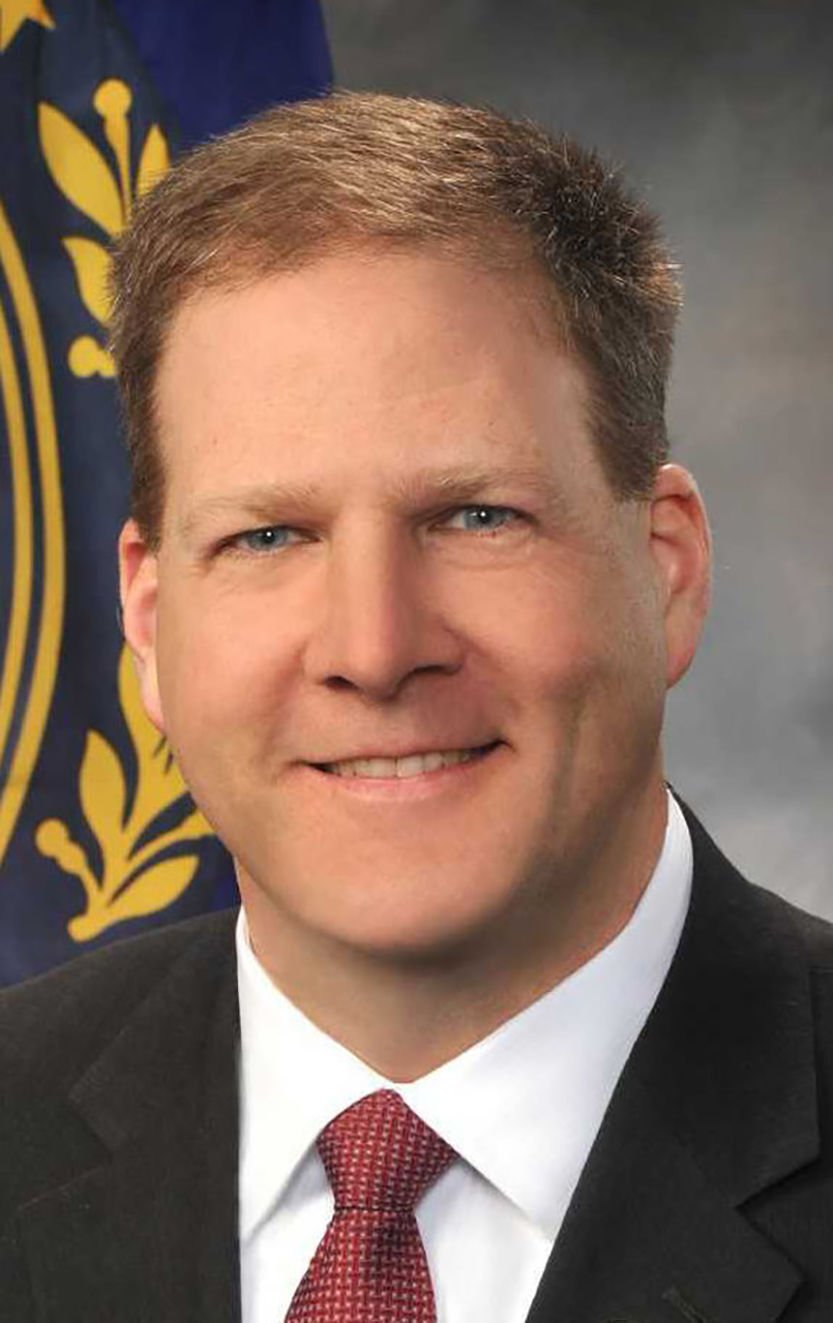 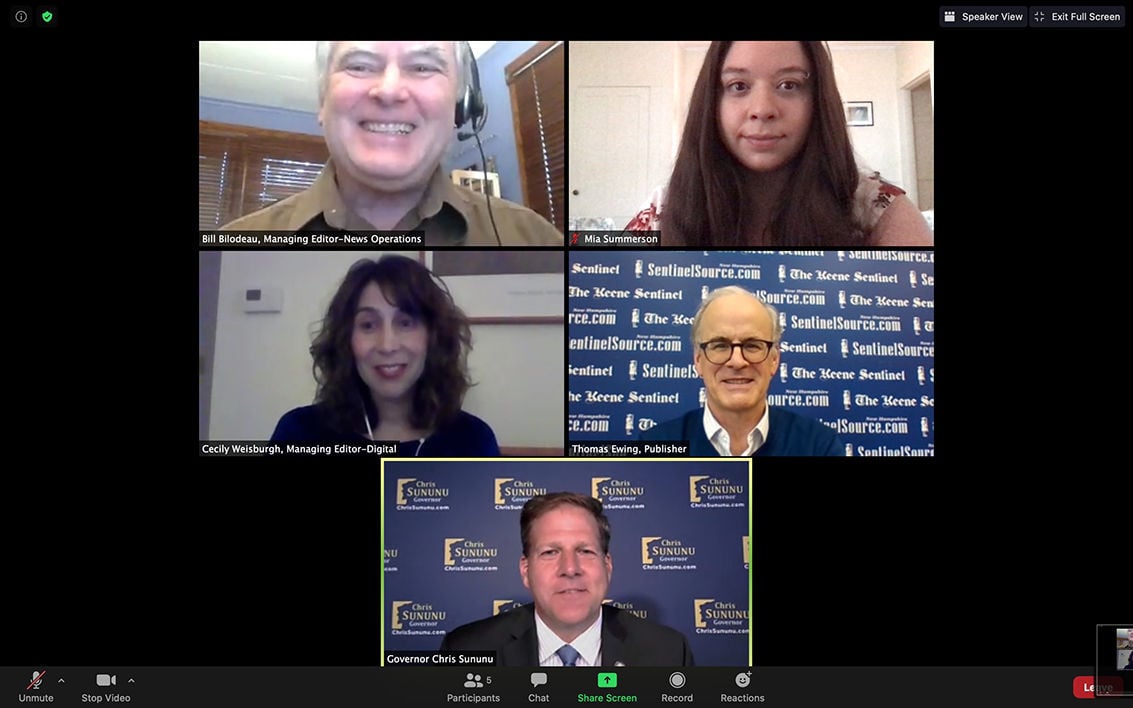 Gov. Chris Sununu said it was the urgent need for quick relief that caused him to bypass traditional procedures to authorize state spending when it came to distributing New Hampshire’s CARES Act money.

The Newfields Republican has come under fire for his decision to establish the Governor’s Office for Emergency Relief and Recovery to appropriate $1.25 billion in federal relief funds rather than running those spending plans through the Legislature or Executive Council. State Democrats challenged the move in a case pending in Hillsborough County Superior Court.

During a virtual meeting with The Sentinel’s editorial board Wednesday, Sununu defended the decision, calling on the age-old notion that bureaucracy simply takes too long. In trying to secure resources from other countries, such as gloves and masks, he said, he had to act fast or miss out.

The governor also defended his decision not to issue a statewide mask mandate, making New Hampshire an outlier in New England. Despite not having a face-covering requirement, he said, the state has done a decent job of keeping its COVID-19 case count low and residents have done an equally good job of practicing safety protocols on their own.

Sununu, who’s seeking his third term as governor, is running against state Sen. Majority Leader Dan Feltes, D-Concord, in the Nov. 3 election. Darryl Perry, of Manchester, will run as a Libertarian.

Sununu is a graduate of the Massachusetts Institute of Technology in Cambridge, where he earned a bachelor’s degree in civil and environmental engineering, and he worked as a civil engineer for a decade.

He served on the N.H. Executive Council before being elected governor in 2016. He is the son of former New Hampshire governor and White House Chief of Staff John H. Sununu and the brother of former U.S. Sen. John E. Sununu, who lost his seat to Jeanne Shaheen in 2008.

In addition to the state’s COVID spending, Sununu has also recently been criticized for vetoing more than 20 bills this year, including one that would have established a paid family leave system by levying a 0.5 percent payroll tax. While Sununu said he supports a paid family leave program, he said he does not support taxing income and noted that he’d put forth a paid family leave plan that didn’t require any taxes.

“They knew I would veto an income tax. I think every governor, Republican or Democrat, should be vetoing an income tax. That’s one of the reasons why we’re such a desirable place to be for families and businesses,” he said. “They knew I was going to veto it, but that’s the one they passed. Their priority was the income tax, not paid family leave.”

The pandemic has brought long-running concerns about the accessibility and affordability of health care to the forefront. Sununu said he’s in support of taking steps to lower the price of medications and encouraging competition among both insurers and health-care providers.

A major part of increasing health-care options for Granite Staters is building out the state’s medical workforce, he said. He pointed to the reintroduction of a licensed nursing assistant program at New Hampshire’s community colleges earlier this year, after he pushed for funding for the program in the state budget.

He also addressed the opioid crisis during Wednesday’s discussion, including the hub-and-spoke model to refer and connect people to treatment that he launched in 2019. Though it has been in operation for a fairly short time, Sununu said his Doorway program has already made significant progress in the fight against substance abuse prior to the start of the COVID outbreak.

However, Sununu said there’s still more to do.

“Already we’re getting great results, the numbers are continuing to go down,” he said. “We got a ways to go to be sure, making sure that that rural access to care keeps getting enhanced and those small providers ... that they’re there for those individuals in all those different communities.”

In addition to the COVID-19 crisis, Sununu has been faced with other issues of national interest during his time in Concord’s corner office. In the aftermath of the May 25 death of George Floyd, a Black man, in Minneapolis police custody, Sununu established a commission to research and make recommendations about how to improve police accountability and address issues of bias.

On Wednesday, he issued an executive order implementing 20 of the 48 recommendations, which range from enhancing training to raise implicit bias awareness to requiring that N.H. State Police officers use body cameras. He said additional recommendations that couldn’t be implemented by executive order will be sent to the Legislature in the form of a bill he’s drafting.

The commission saw “law enforcement and Black Lives Matter really coming together, not butting heads, but coming together as one, saying we all agree this can and should be done,” he said. “I think it was awesome, and I think that report is just a phenomenal product; they worked so hard to do it. We led the charge, and now we’re actually taking action.”

An interview with Gov. Chris Sununu, running for re-election