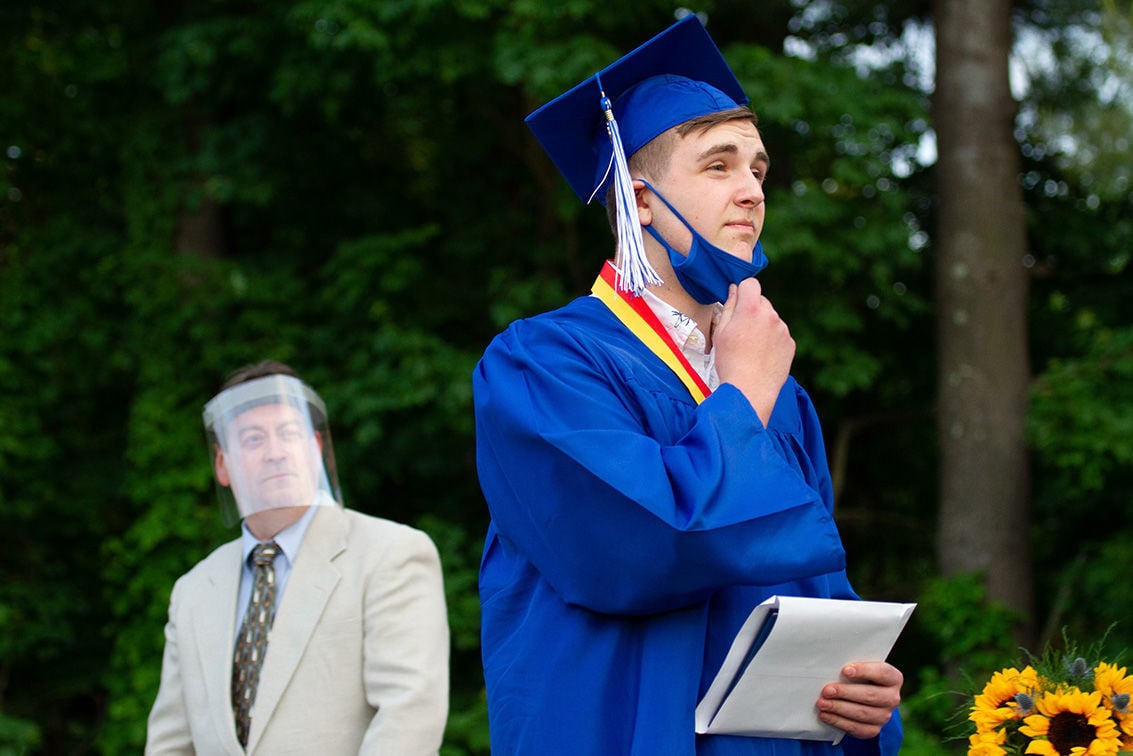 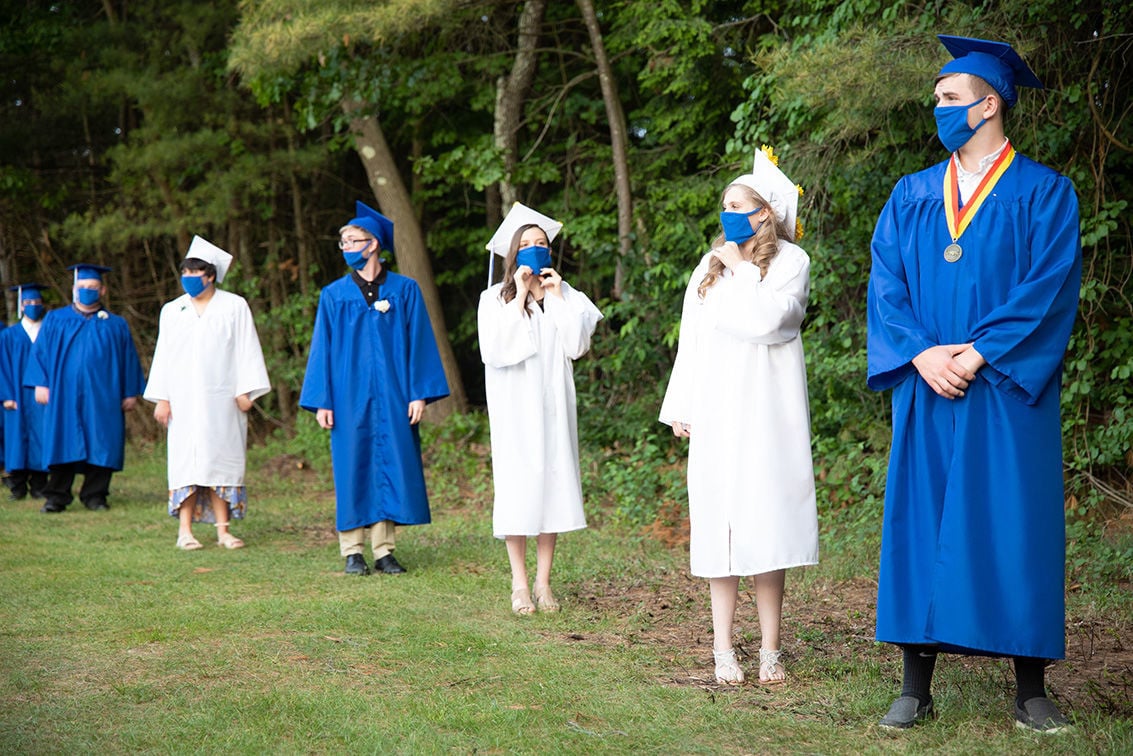 Hinsdale seniors practice social distancing while waiting to receive their diplomas during the Hinsdale High School Class of 2020 graduation ceremony. 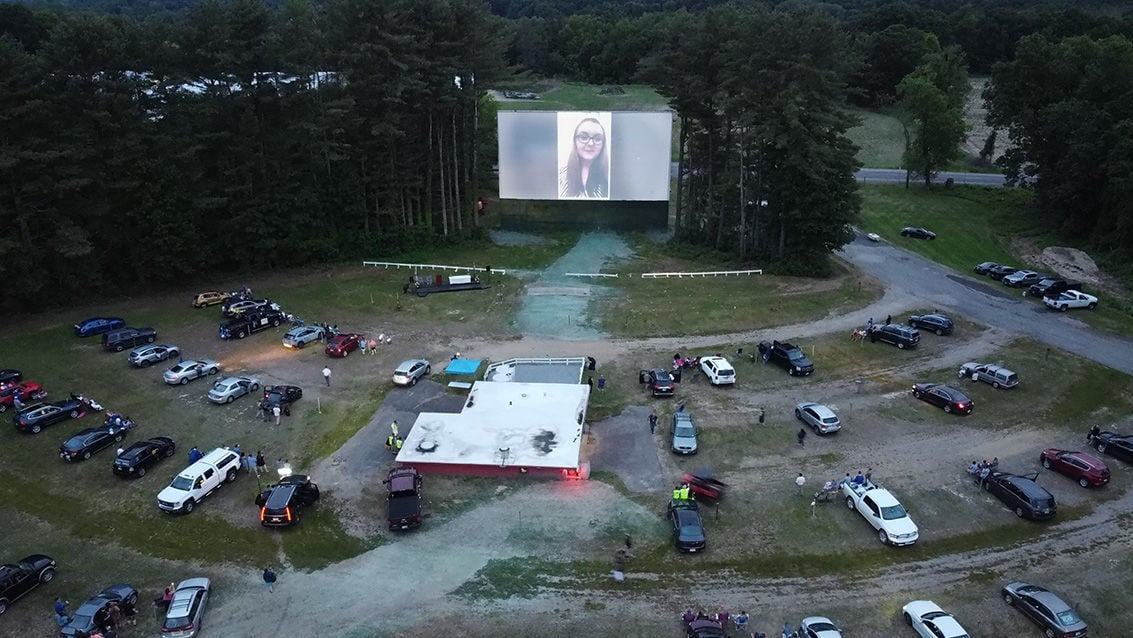 Hinsdale seniors and family watch a pre-recorded graduation video during the Hinsdale High School Class of 2020 graduation ceremony at the Northfield Drive-in. 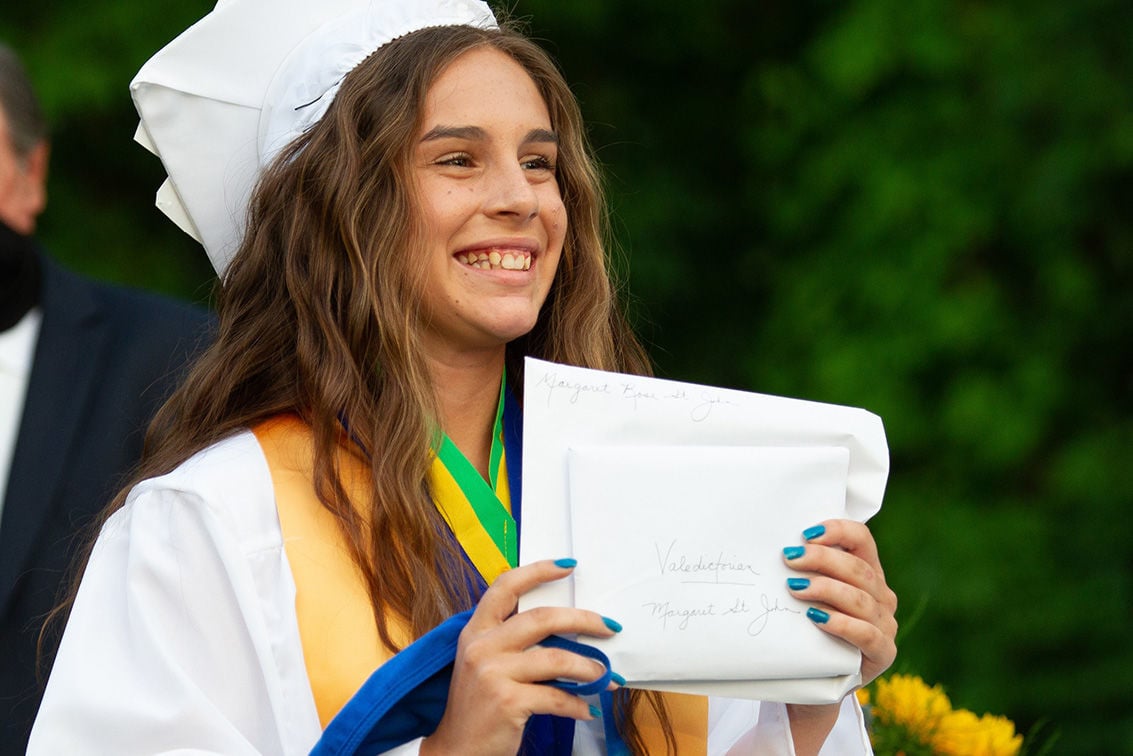 Class Valedictorian Margaret St. John accepts her diploma during the Hinsdale High School Class of 2020 graduation ceremony in Hinsdale Tuesday. Receiving 10 scholarships, she will be attending the University of New Hampshire. 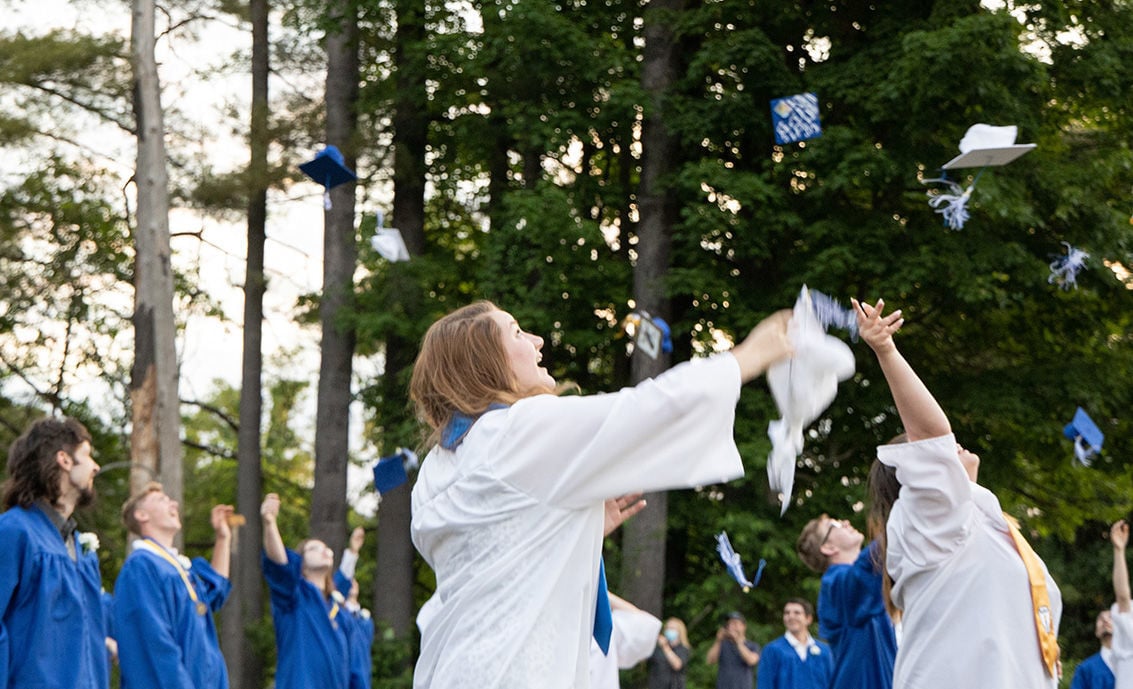 Hinsdale seniors practice social distancing while waiting to receive their diplomas during the Hinsdale High School Class of 2020 graduation ceremony.

Hinsdale seniors and family watch a pre-recorded graduation video during the Hinsdale High School Class of 2020 graduation ceremony at the Northfield Drive-in.

Class Valedictorian Margaret St. John accepts her diploma during the Hinsdale High School Class of 2020 graduation ceremony in Hinsdale Tuesday. Receiving 10 scholarships, she will be attending the University of New Hampshire.

“We didn’t get the traditional end to senior year like most classes, but there’s nothing traditional about our class,” St. John said in her valedictory address. “We are a special and exceptional group of people, who have been fighting challenges our whole lives. And living and graduating through this pandemic, nothing has changed.”

Here comes the class of 2020! pic.twitter.com/w4XiRQQy0j

St. John’s speech, along with all of the customary graduation remarks, were delivered via pre-recorded video, projected onto the big screen at the Northfield Drive-In. Car horns joined the chorus of applause after each of the 32 graduates walked across the stage, wearing masks in addition to their caps and gowns, to receive their diplomas.

The event began with a parade of decorated vehicles led by the Hinsdale police and fire departments from the school to the drive-in, which sits on the New Hampshire-Massachusetts state line.

The unorthodox graduation, which was also live-streamed online, allowed graduates and their families to maintain social distancing during the COVID-19 pandemic. The ceremony itself was a testament to the class’s ability to adapt to new situations and overcome adversity, Hinsdale School District Superintendent Wayne Woolridge said.

“The class has tremendous grit in regard to the way they quickly pivoted and tried to come up with a plan for graduation once they knew the traditional graduation was out of the picture,” he said shortly before the ceremony.

Woolridge added that students worked with a group of parents, school staff and school board members to plan their graduation.

“There’s not very much that you could say that’s coming out of this pandemic that is of great value, but this unique problem-solving that the kids went through to come up with this venue, I think, will serve them well in the future,” Woolridge said. “I’m happy for them.”

And though the graduation, the 138th in the history of Hinsdale High School, did not follow the usual format, plenty of traditions remained. Students still tossed their caps in the air after receiving their diplomas. “Pomp and Circumstance” provided the soundtrack for the video, which also included senior quotes and a list of scholarship and award winners. And, of course, parents were still beaming with pride.

“I’m just very proud, especially with it being so different, having so much taken away from them,” said Theresa Girroir, whose twin daughters Juliana and Alexandra Yialiades graduated Tuesday. “ ... Your senior year, you build so many memories you take with you through life, and then you look back upon all your friends and all the different things that you did. They missed out on [that].”

To see our virtual yearbook for Hinsdale High School, as well as other local schools, visit www.sentinelsource.com/graduation_2020/

Despite missing out on other senior year traditions like prom and a class trip, graduation made the challenges of the end of this year worthwhile, Juliana Yialiades said. “Just getting here to this point and being able to do this in this way just means the world,” the salutatorian and class president said.

In her video address to the class, Yialiades also spoke of the difficult circumstances she and her classmates have overcome to reach graduation. They accomplished this, she said, by finding joy in small, meaningful moments like cheering on friends at sporting events, hosting dances for Hinsdale middle schoolers and eating lunch together in the cafeteria.

“We have all experienced individual challenges, and we knew how to come together to enjoy the little things with great optimism,” she said.

Moving forward after graduation, St. John added that the Class of 2020 should continue to embrace adversity and even failure, and use these as opportunities to grow.