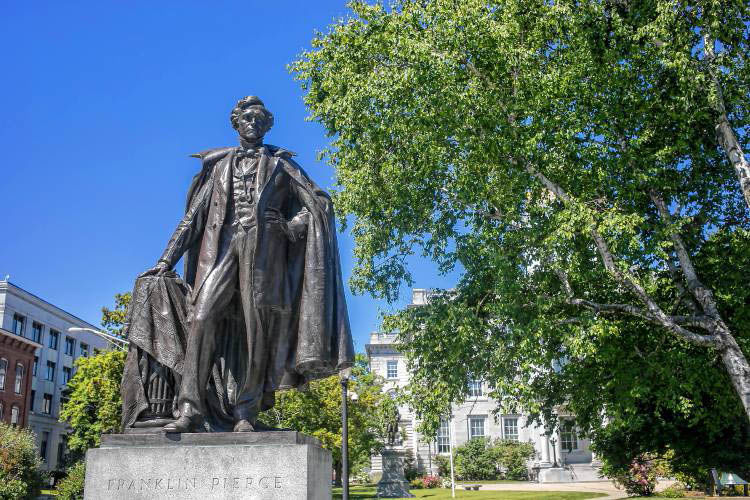 A statue of President Franklin Pierce adorns the Statehouse grounds. Pierce’s legacy is under fire for his stance on slavery. 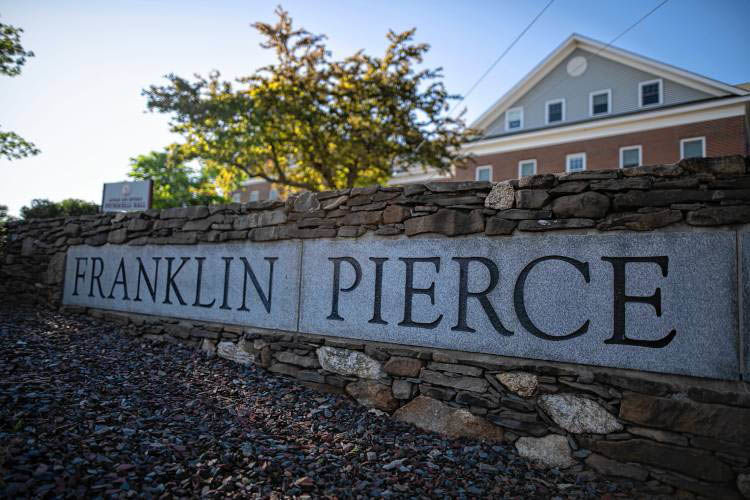 A statue of President Franklin Pierce adorns the Statehouse grounds. Pierce’s legacy is under fire for his stance on slavery.

Students and alumni are calling for universities bearing the name of Franklin Pierce, the only president from the state of New Hampshire, to change their names, as part of the national conversation and greater scrutiny of celebration of historical figures with ties to racism.

Chelsea Leach, a Southern New Hampshire University student who studied at Franklin Pierce, started a petition to change the name of the university on Monday, on the site Change.org.

“While the University has changed its name once in 2007 from ‘College’ to ‘University’ I am asking you to change the name from a man who condoned egregious criminal acts and the enslavement of African American lives. Please consider changing the name of your University to represent the diversity and inclusion that is present in our society today,” Leach wrote in her petition request.

In a statement issued to the Ledger-Transcript on Tuesday, the university was receptive to opening a dialogue with students about its namesake.

“Franklin Pierce University continues to grieve the killing of George Floyd and the painful reminder it, and so many other senseless deaths, offers of the systematic racism that plagues our nation,” the statement read. “Prior to Mr. Floyd’s death we finalized a new Diversity and Inclusivity statement as a key focus of our new five-year strategic plan, and today we continue to call on our community to join the virtual gatherings we created to share ideas, heal and identify actions we can take to bring about real change.”

While the statement did not outline any formal process for the discussion of a name change, it did leave the door open for those discussions to occur.

“We will be equally thoughtful in any formal process we put in place for our students, faculty, staff, trustees and alumni to discuss any concerns related to the namesake of our university, the 14th president of the United States. Most importantly, we will remain steadfast in our commitment to send students into the world who are committed to justice and equality for all — regardless of race, creed, gender identity or sexual orientation,” the statement read.

The petition about Franklin Pierce University’s name comes on the heels of the discussion about changing the name of another “Franklin Pierce” institution: The UNH Franklin Pierce School of Law. Students have mobilized with letters to the administration, and on social media, using the hashtags “#UNHLoud,” a reference to a racial justice movement at Michigan Law School.

The Franklin Pierce Law Center, as it was originally known, nearly lost the moniker when it joined the University of New Hampshire in 2010. However, just last year, the school renamed its law branch as the UNH Franklin Pierce School of Law, a blended name for its recognition value and to appease alumni who wanted to see the name carry on. At the time, the National Black Law Student Association in Washington, D.C. protested the re-adoption of the name, based on Pierce’s racist policies, in a statement published by the National Jurist, according to the Concord Monitor.

Now, however, UNH is taking a harder look at the name, after letters sent to the institution in early June, asking for the name to be removed, the Concord Monitor reports.

In a statement to the Concord Monitor, Meghan Carpenter, dean of UNH Franklin Pierce School of Law, expressed support for the student’s requests to change the name of the law school, writing, “Our school has an incredible opportunity to become a meaningful part of the national dialogue happening at this moment. I’m personally inspired by the voices within our school community who are expressing their feelings on this issue. The school will gather input and engage discussion on a variety of issues related to racial justice, diversity and inclusion, and the Franklin Pierce name will of course be a significant part of these discussions.”

Associate dean of administration for the school, Leah Plunkett, also told the Monitor she was open to starting a discussion about changing the organizations’ names.

Franklin Pierce, the 14th president of the United States, was a northern Democrat, and while not a slave owner himself, was a pro-slavery northerner who opposed the abolitionist movement and signed several significant laws that perpetuated the practice.

Doug Ley, an associate history professor at Franklin Pierce University, said among historians, Pierce’s legacy isn’t impressive. There may not have been a politician at the time who could have eased tensions enough to avoid the Civil War, but Pierce’s tenure didn’t improve matters any, Ley said.

“As far as Franklin Pierce being problematic, I think he is, and have long thought that,” Ley said. Ley said that though the university has not taken serious consideration of a name change in the past, he has suggested to past presidents that other New Hampshire political figures, such as Pierce contemporary and adversary, John Parker Hale, an anti-slavery activist and Senator, would be a more appropriate choice.

Ley said Pierce had a tragic personal life, losing all three of his sons before they reached adulthood, and had little corruption in his White House, as well as maintaining his original cabinet throughout his presidency. But his political legacy overshadows those points dramatically.

Notably, Pierce approved the Kansas-Nebraska Act in 1854, which decreed settlers in a territory could decide the issue of slavery. The act effectively overturned a previous decision, the Missouri Compromise, which created a latitude line as the boundary between free and slave states, and could have allowed slavery to creep into the northern portion of the country. The Act was so controversial, it led to bloody fighting in Kansas as settlers on both sides rushed to move in and create a majority, and was one of the factors that helped form the new Republican Party.

The Kansas-Nebraska Act inflamed tensions between the north and the south and was one of the factors that set the stage for the Civil War.

Pierce also continued to enforce the Fugitive Slave Act, and dispatched federal troops to enforce the recapture of an escaped slave named Anthony Burns, who had made it to Boston, an act which enraged many northerners.

While those are some of the notable facts of his presidency, Ley said that in his earlier political career, Pierce also was part of the committee that wrote a gag rule that prohibited discussions of slavery in the legislature. That was 20 years before he won the nomination.

“His goal was always to just not talk about slavery. I don’t think he was unusual as a political leader in being racist. Most were, by our standards today,” Ley said.

His vice president, William King, was from Alabama, and his family was the largest slaveholding family in the state.

Pierce, a compromise candidate in his first term, lost the confidence of his northern Democrat supporters, who ultimately did not nominate him for a second term, instead nominating James Buchanan Jr. He and Buchanan both often rank at the bottom of historians’ analyses of the most effective presidents.

“He’s useful only in that he’s useful to explain what a disaster he was. I don’t know any historian that touts him as an effective leader,” Ley said. “I don’t see any reason we should be wedded to Franklin Pierce as a name.”

Perhaps due to his lack of popularity in his native north when he left the office, there is only one monument to Franklin Pierce in the state. In 1913, the state legislature agreed to erect a statue of Pierce on the state house lawn in Concord, which was put into place in 1914 and remains there today.

Ley, who is also a state representative, said it’s notable that the statue isn’t located inside the stone courtyard at the Statehouse.

“Times change, culture changes, and the ways people think change,” Ley said. “Decisions on who to commemorate and memorialize are not unchangeable, and we have to recognize that, and I don’t think that’s a bad thing.”

This article is being shared by The Granite State News Collaborative. For more information visit collaborativenh.org.