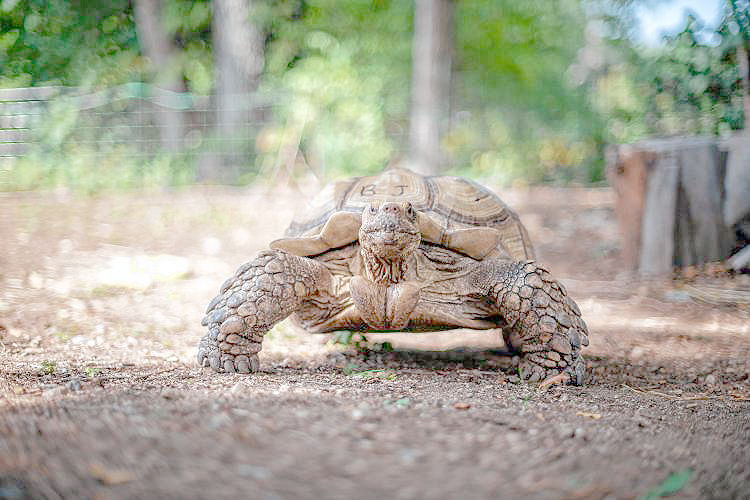 BJ the tortoise is a refugee at the Hancock Inn due to the coronavirus pandemic. 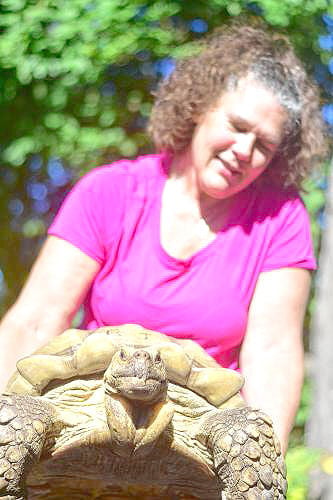 Marjorie McAlister Hynes holds her tortoise BJ outside the Hancock Inn in August.

BJ the tortoise is a refugee at the Hancock Inn due to the coronavirus pandemic.

Marjorie McAlister Hynes holds her tortoise BJ outside the Hancock Inn in August.

HANCOCK — The Hancock Inn’s longest-tenured guest this summer was a refugee of the COVID-19 crisis. While waiting for his moving paperwork to clear, 22-year-old BJ spent the summer sunbathing and clearing some brush behind the inn. “He has a lovely personality,” Hancock Inn owner Marcia Coffin said, “as well as a beautiful shell.” BJ is an 80-pound spiny thighed African tortoise.

BJ’s owner is Marjorie McAlister Hynes. She was in the middle of moving to Maine around St. Patrick’s Day when she stopped for a couple days in Hancock to visit her sister, the Hancock Inn’s front of house manager Jean Marie Cowhig — right when the state issued the stay-at-home order. Moving plans now upended, McAlister Hynes rode out the stay-at-home orders with Cowhig in the emptied inn, and was able to retrieve BJ once restrictions lifted, installing him in a fenced-in area behind the Inn in July. In the meantime, the original permits she’d been granted for moving exotic pets to Maine expired (she also has a parrot). McAlister Hynes has spent the rest of the summer redoing the paperwork necessary to move exotic pets to Maine, negotiating odd office hours and finding a vet prepared to examine an unusual species in an unfamiliar state during a pandemic — while splitting time between Hancock and a friend’s house in Maine.

BJ had previously been staying in Virginia with two other tortoises belonging to one of McAlister Hynes’ friends, since there was no suitable place for him where she lived, she said. The process of moving him — an involved one even without the pandemic’s contributions — began earlier this year after one of the other tortoises started being aggressive towards him, she said.

Spiny thighed African tortoises, also known as sulcata tortoises, are native to Africa. They can’t digest their food unless their body temperature is between 90 and 105 degrees, McAlister Hynes said, and she’s had to put down mats to keep BJ from burrowing under a rhododendron bush in his enclosure, the way he would in the wild. BJ has access to a heating pad and lamp, as he will in the indoor-outdoor enclosure prepared for him in Maine. “It’s not as simple as traveling with a dog,” she said.

Although she’s currently looking for work, McAlister Hynes previously worked as an educator, bringing reptiles and other animals to classrooms throughout New England. She used to run the Rhode Island Herpetological Association with her late husband, who one year gave BJ to her as a hatchling for Mother’s Day. “He was about the size of a golf ball,” McAlister Hynes recalled. She continues to use her husband’s name, McAlister, for anything related to animal education in his honor, she said.

Caring for a tortoise is an inter-generational commitment: BJ could live to be 100 years old, McAlister Hynes said, and she’s already willed his care to her son and grandson in Florida. “They have agreed they will ensure his safety when I’m gone,” she said. For now, McAlister Hynes said she’s grateful for BJ’s interim home at the Hancock Inn. “They have been so gracious and so considerate,” she said. Earlier in the summer, BJ received a visit from local author Sy Montgomery, who took pictures for an upcoming book. BJ, on his part, has seemed to relish his summer vacation in Hancock: a short period in an already long life, marked by devoted care.