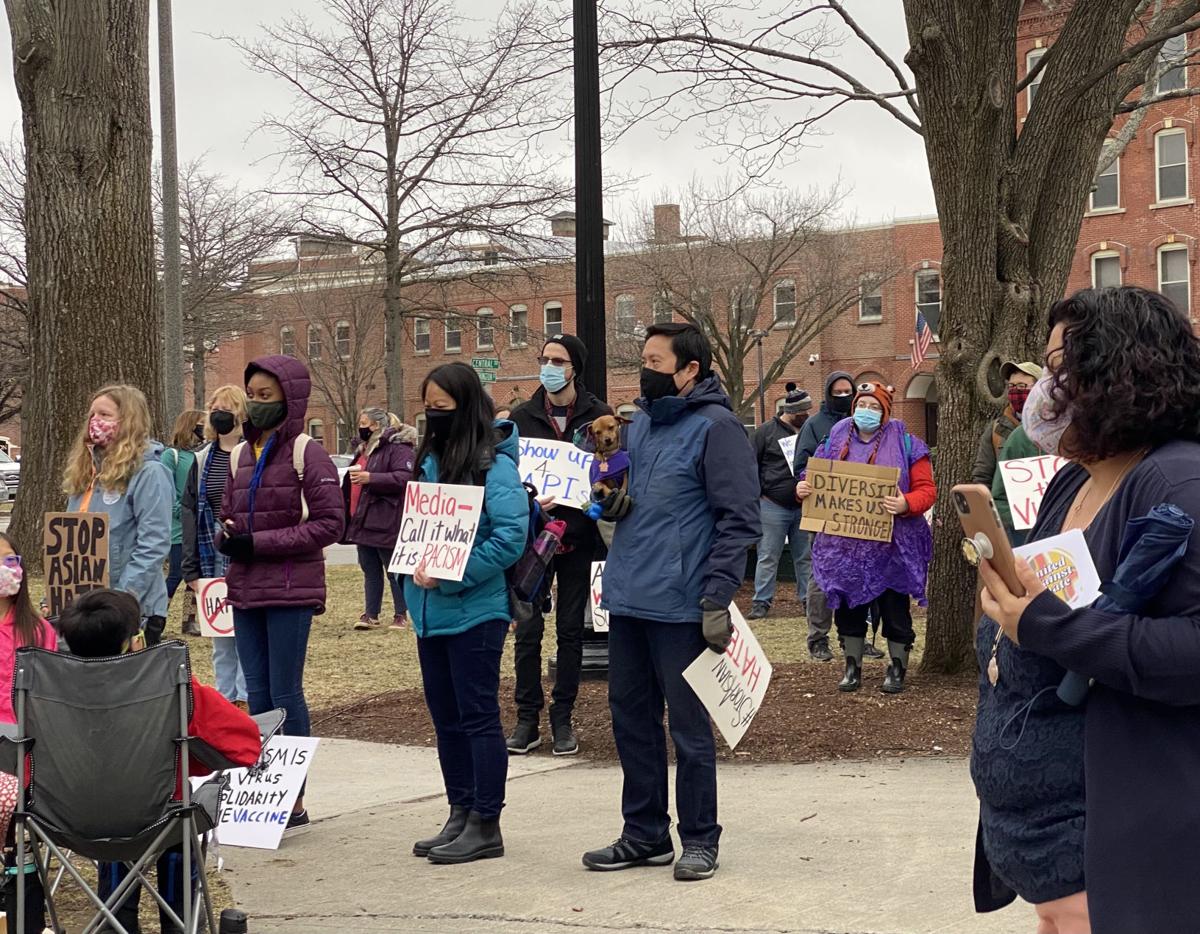 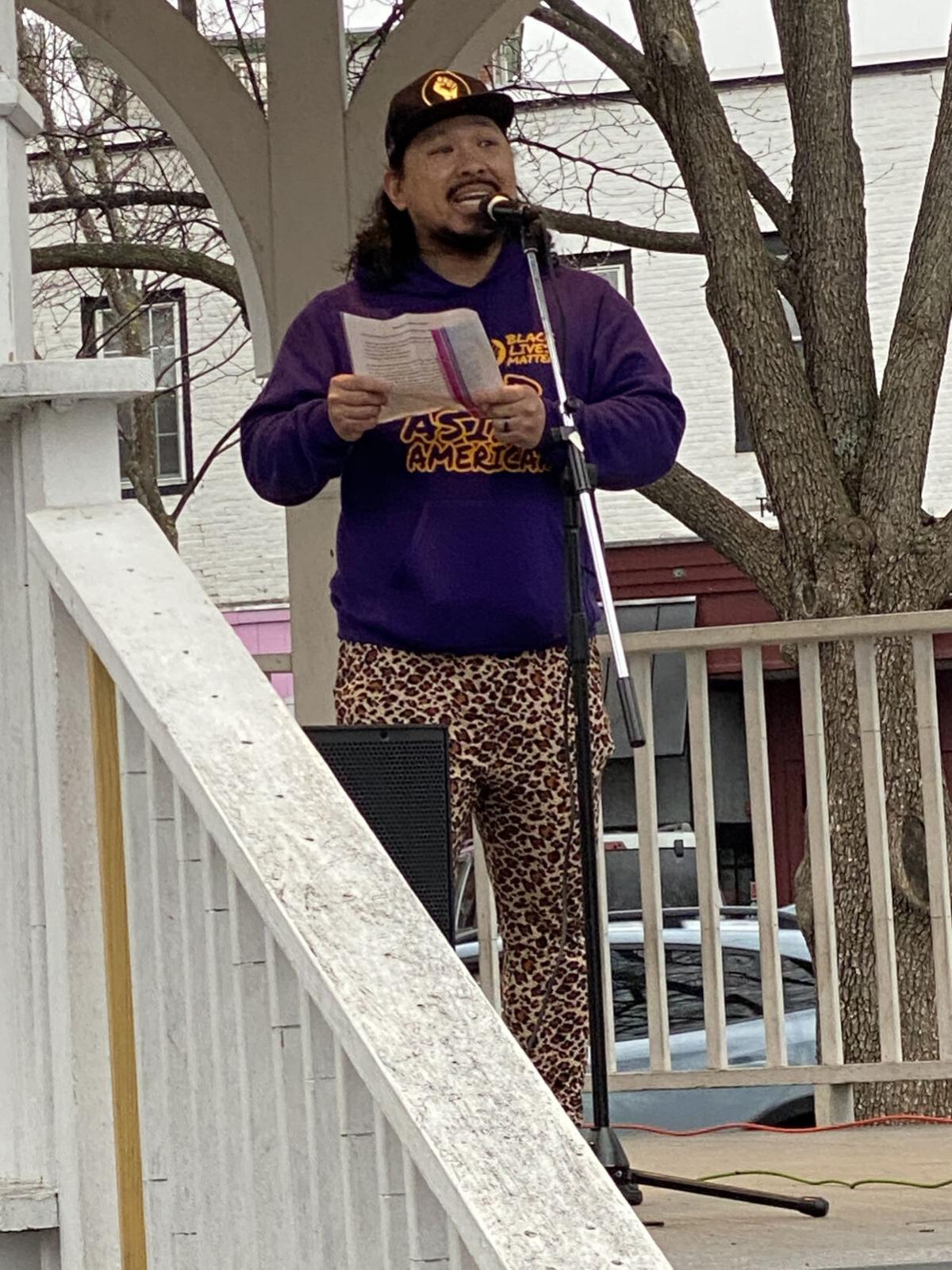 addresses the crowd that gathered Sunday 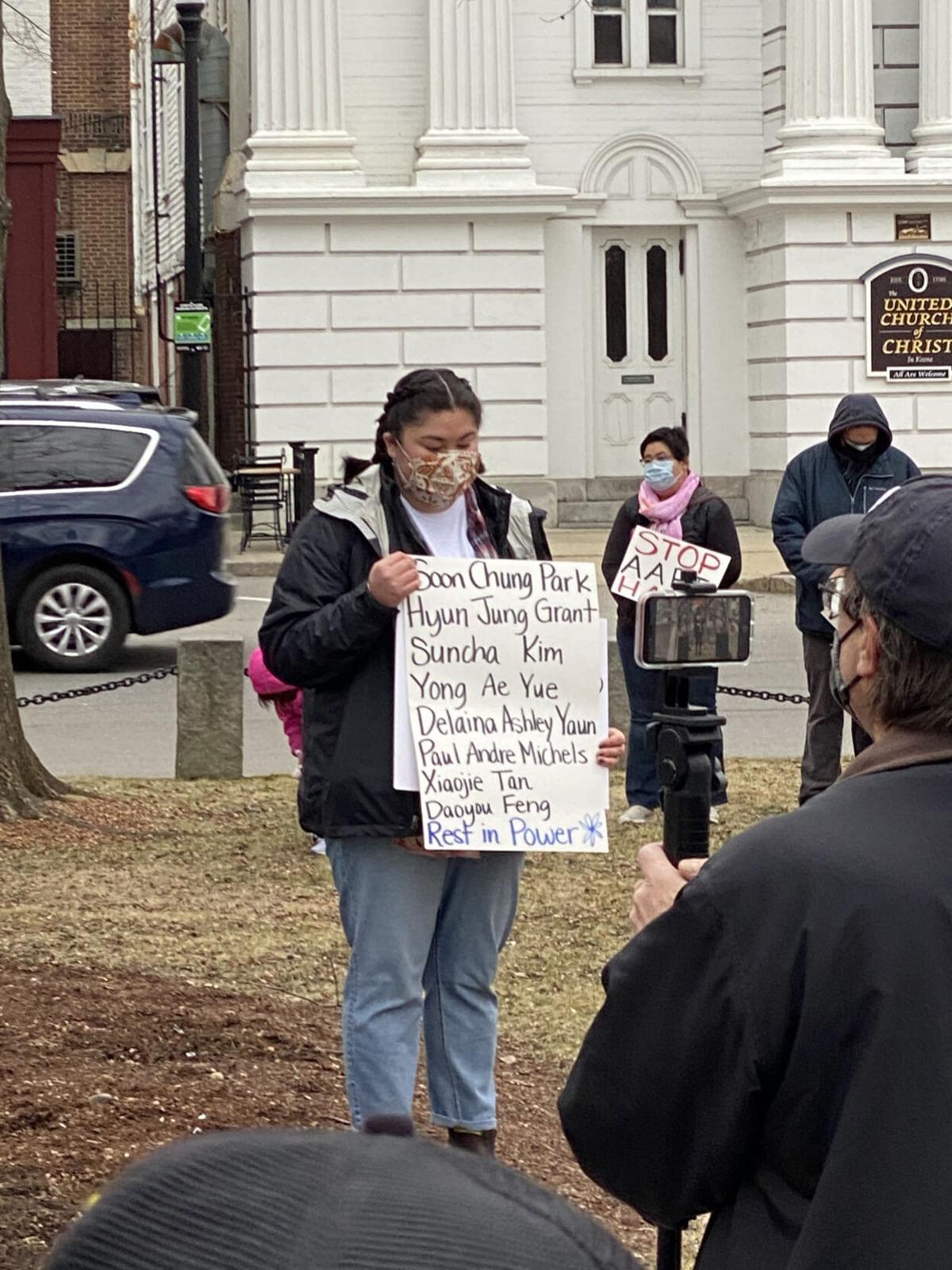 Jamie Melvin of Keene holds a sign with the names of the victims of the Atlanta shootings.

A steady rain Sunday afternoon didn’t stop dozens of people from gathering in Keene’s Central Square to take a stand against racism toward Asian Americans.

The square was packed with people holding signs bearing messages like “Stop Asian Hate” and “Diversity Makes Us Stronger.” Event organizers and guest speakers spent more than an hour sharing their stories, visions for change and messages of hope.

Event organizer Jamie Melvin of Keene described herself as biracial and said she struggled with her identity growing up. She said there was a pressure to erase her Asian heritage, which caused her to “absorb the white narrative.”

“Unlearning these cultural biases within myself has been a journey, one that I’m not finished with yet,” she said. “I still have work to do, I admit it. Society still has work to do, we must admit it.”

She pointed to research done by the group Stop AAPI Hate, which found nearly 3,800 reports of hate crimes against Asian Americans between March 2020 and February 2021. She said these crimes have spiked since the start of the pandemic.

The protest was planned in response to a shooting spree in earlier this month in the Atlanta area, which claimed the lives of eight people, including six women of Asian descent. A collage celebrating the lives of the victims was on display, and their names were read aloud, along with brief comments on who each person was, by co-organizer Pauline Moll of Keene.

Melvin said she teamed up with Moll after meeting her in a group chat for local Antioch University students. She said they bonded over their shared life experiences, and when Melvin learned there wasn’t a local response planned to the Atlanta killings, she asked Moll to help her organize Sunday’s rally.

Much of Sunday’s conversation dealt with the idea of Asians as “the model minority.” It’s a notion that Moll said started after World War II in an effort to “save face” following the U.S. government’s policy of imprisoning Japanese Americans in internment camps.

“The model minority myth then came of age,” she said. “The idea that Asians are the model of what a minority should look like: hard-working, law-abiding, studious, quiet, obedient. And everyone else — especially Black people — were painted as lazy, incompetent, reckless and chaotic.”

Moll said this narrative has contributed to stereotypes about Asian Americans and has also been used to pit Asian American communities against Black communities. In an effort to dispel that narrative, representatives from Black Lives Matter Nashua also spoke during the protest and advocated for solidarity.

Ben Chan, who identified himself as Chinese American and a New York City native who came to the area last summer, said Keene and New Hampshire may not necessarily be known for being racist, but examples of the impact of racism on policymaking do exist.

He spoke about the use of city planning to segregate city communities, or in the case of Keene and New Hampshire, he argued, to keep minorities out all together. He called on the Keene and New Hampshire governments to do better, contending that restrictive policies that keep affordable housing from being built have effectively preserved “Keene’s white identity.”

“This did not happen by accident, it’s not a natural outgrowth of free-market capitalism,” he said.

Chan said Keene‘s white residents need to become aware of the ways that racism impacts the community and take a stand against it. He said that while people in the city may say Keene is welcoming to all and reject the idea that the city lacks diversity, he said they’d be unable to point to a specific action they’ve taken to fight racism.

“Until enough people in Keene and New Hampshire choose liberation, anti-racism,” he said, “the term ‘live free’ won’t be a real option for white people, but an unattainable fantasy.”