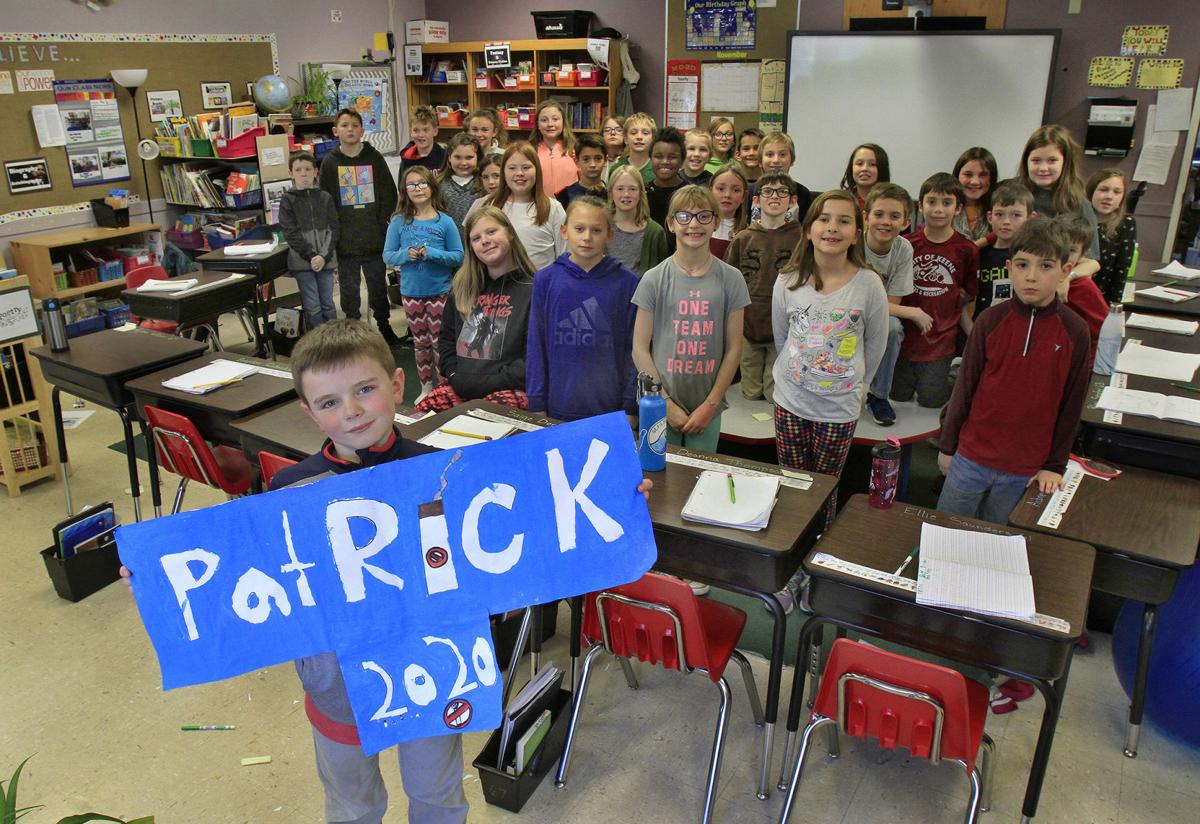 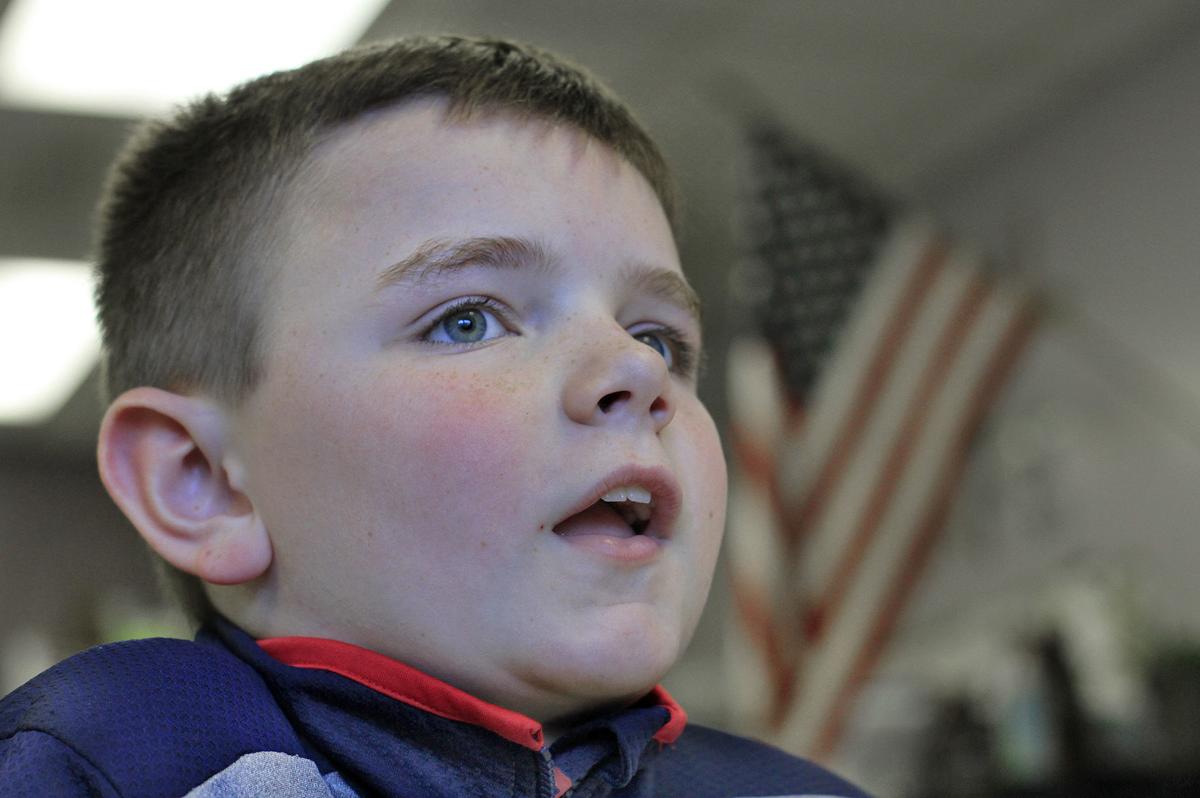 Patrick Lavoie, a 5th-grader at James M. Faulkner Elementary School in Stoddard, talks about his campaign to be the 2020 N.H. kid governor.

Patrick Lavoie, a 5th-grader at James M. Faulkner Elementary School in Stoddard, talks about his campaign to be the 2020 N.H. kid governor.

STODDARD — Unlike most politicians, Patrick Lavoie doesn’t roll with a lapel pin or other big-league signifiers.

Instead, he sported a New England Patriots zip-up fleece to the James Faulkner Elementary School in Stoddard Thursday, gregariously thanking his campaign team of 37 classmates and expressing genuine surprise at his first taste of political success.

Through a national civics program, the Stoddard 5th-grader was recently elected by other Granite State elementary-schoolers to the N.H. Kid Executive Council, finishing as one of seven finalists for kid governor.

He’ll meet with the council throughout the year to advise the state’s kid governor — much in the way the adult panel does, minus the contract approval and checks on executive power. And the students will write blog posts on their platforms, according to Patti Osgood, the community outreach organizer for N.H. School Administrative Unit 24.

The 10-year-old — who normally just goes by Pat at school, but campaigned using his full name — ran on an anti-underage-tobacco-use platform.

“I think I picked underage tobacco use because my brother [Tom] was telling me a lot of stuff about the middle school, how kids were smoking, Patrick said, taking a pause and taking his hands out of his pockets. “And I kind of wanted to believe it, but I didn’t really.

“... so I went on with that topic and researched a lot,” he continued, “and found some good information.”

Pat said he wants to be an NFL player when he grows up, or maybe serve in the military as a doctor, but noted he’s finding politics to be surprisingly fun.

He rolled out his plans in a campaign video directed by his friend Franz Haase, who edited a couple days’ worth of footage on an iPad.

Spiffing up in a black suit with a light gray tie and blue sneakers for the big ad, Pat makes his pitch around a local creek, in front of a campaign poster and flanked by his senior staffers at the Faulkner School’s playground, where classmate and campaign adviser Caroline Kilchewski does a backflip off the swingset.

“New Hampshire kids are flipping out for Pat!” one of the students says before Caroline hops, grips the monkey bars and then launches herself through the air to land the flip.

“Well, I used to just, like, swing on the monkey bars and stuff, but then I felt comfortable doing flips,” Caroline, also 10, said Thursday of her preparation for the ad, which also dovetailed well with doing gymnastics since age 4.

The campaign deployed location scouts for the shoot, and even used copy writers along with editors for the script.

In an era where cynicism and polarization around politics are mounting as voters’ tolerance for inauthenticity is waning, Pat said he delegated to his team members and wanted as much input as possible, not to over-engineer the campaign, but to get it right.

“I wanted to present it with a lot of facts, so people would be like, ‘whoa,’ and agree that like, [youth smoking] should stop,” he said.

Integral to the smooth rollout of the video was Franz.

Although he was behind the camera, Franz is much more extroverted than Pat, and the two bounced ideas off of each other — take after take — until they felt proud of the video.

In a pull-aside interview in the school principal’s office Thursday as his classmates worked on storytelling, Franz elaborated on the behind-the-scenes machinations of the campaign, and described how he looked to tailor the image of his dear friend in an effort to get votes from other kids around the Granite State.

“One thing I disliked is that he, most of the time, would put his hands in his pockets in just about every shot,” Franz, who also wants to play in the NFL, quipped. “So it just looks weird ... It makes you look a little less professional.”

The kids had to learn how to settle on decisions as a team, with the occasional disagreement between the candidate and staff.

“I’ve told him maybe like three times [about the pockets], and he’s like, ‘Just let me do what I want,’ ” Franz said, lowering his voice to a baritone to quote Pat.

But Pat said he couln’t have done it without his team.

Despite the Stoddard students’ technical know-how, researched platform and targeted messaging, the young Lavoie said he was surprised the campaign went so well.

“I think probably that I got into the top seven” was surprising, Pat said. “Because I felt like other schools were bigger, so they would have better editors.

“So I thought, like, all the videos would be better,” he continued, “and mine would just be like not bad, but — what’s the word for it? — different.”

But he prevailed, and will get the chance to meet Gov. Chris Sununu and the rest of the N.H. Kid Executive Council at the Statehouse in Concord in a few weeks.

So does Pat want to go into politics one day, perhaps upon retiring from the NFL?

“A lot of people, when I told them about this, they said I’ve been becoming a little like a politician,” he said. “I feel like that was a good compliment.